Defence Secretary Gavin Williamson was last night at the centre of a row over claims he had been overheard plotting a Tory leadership bid in an exclusive London restaurant.

Party sources have told The Mail on Sunday that Mr Williamson was ‘caught’ plotting with two diners on Tuesday evening at The Colony Grill, a £100-a-head restaurant in London’s Mayfair.

According to the sources, Mr Williamson – dubbed ‘Private Pike’ by the Treasury following a row with Chancellor Philip Hammond over defence spending – was heard boasting about his links with the DUP and how he could outmanoeuvre Foreign Secretary Jeremy Hunt and Home Secretary Sajid Javid when the next contest came.

The alleged remarks – which Mr Williamson strongly denies – were relayed to a senior party figure by a diner eavesdropping at an adjoining table and passed around Tory high command.

A source said: ‘We were told that Gavin was saying that he had the DUP eating out of his hand, because of the contacts he had made when striking the agreement to prop up the Government after the Election. He was apparently talking about how the threat from Jeremy and Saj [the two frontrunners] could be neutralised by mobilising his supporters on the backbenches.’

The wood-panelled The Colony Grill, in the five-star Beaumont Hotel, is a favourite venue for plotters because of its safe distance from Westminster and its – seemingly – discreet leather booths. Dishes include Oscietra caviar, at £140 a plate, and 14oz grain-fed rib-eye steak for £49.

Last night, Mr Williamson’s team hit back at the claims, with one supporter describing them as ‘deliberate mischief making’ and ‘tittle tattle’.

A source close to Mr Williamson said: ‘Gavin does not have leadership ambitions. He wants to stay as Defence Secretary to complete what is a very important job. And anyway, one of the dining guests was unknown to Gavin, so the idea he would have confided such thoughts stretches credulity.’ Mr Williamson was promoted from Chief Whip to the MoD last year when Michael Fallon was forced to resign during the ‘pestminster’ scandal. His ambition became evident earlier this year when The Mail on Sunday revealed he had threatened to mobilise Tory MPs to vote down the next Budget if Theresa May did not commit more money to defence. ‘I made her – and I can break her,’ Mr Williamson boasted to service chiefs.

Within the Cabinet, Mr Hunt and Mr Javid are regarded as the frontrunners, with Mr Javid openly ringing round MPs to gauge support within the party.

Last week, Mr Hunt, who backed Remain in 2016 and once supported the idea of the second referendum, appeared to pivot towards the Brexiteers by insisting Britain could ‘flourish and prosper’ if it crashes out of the EU without a deal.

It has led some members of the Eurosceptic European Research Group of Tory MPs to discuss swinging behind Mr Hunt in a contest.

When asked directly if he wanted to be prime minister, Mr Hunt said: ‘I think every MP has a corner of their heart that says they would like to have a crack at the top job. I’m no different.’

However, his aides later clarified that he did not welcome the idea of no deal, and had been urging MPs to back the deal Mrs May negotiated with Brussels. 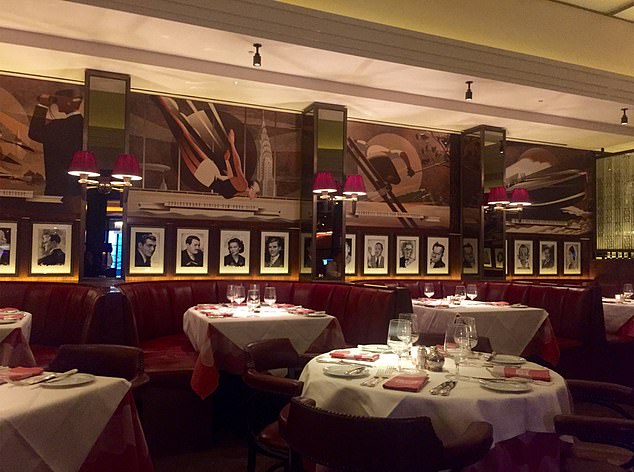 The wood-panelled The Colony Grill, in the five-star Beaumont Hotel, is a favourite venue for plotters because of its safe distance from Westminster and its – seemingly – discreet leather booths

One senior diplomatic source said: ‘We were delighted when Jeremy was announced as the new Foreign Secretary – we thought he was a serious diplomat for serious times. But eyebrows have also been raised about his flirting with the extreme Brexiteers, which is as dangerous as it is deceitful.

‘If he continues down this road he will quickly lose the support of his colleagues and department.’

The source added: ‘No one believes he is a Brexiteer. He is overtly political and has made members of the Civil Service quite uncomfortable with the blurring of the lines between political and departmental. He also doesn’t read his brief especially closely, which has been noticed by senior officials.’

However, another FCO source hit back last night: ‘People in the FCO certainly underestimated Jeremy. They thought he would be their creature but he has refused to play their game.’