A ‘defenceless’ toddler died from a ‘catalogue’ of ‘horrendous’ injuries akin to those sustained in a car accident, a court has heard, as his mother and her partner go on trial for his murder.

Kemarni Watson Darby, three, suffered alleged repeated assaults and was found ‘lifeless’ by paramedics on June 5, 2018 at a flat in West Bromwich, Sandwell.

Prosecutors at Birmingham Crown Court told the court the toddler had suffered a ‘vicious forceful assault’ resulting in ‘multiple fractures to his skeleton’, which were likened to the result of a ‘road traffic accident’.

The court heard that the youngster suffered ‘horrendous injuries’ in the months leading up to his death.

His mother Alicia Watson, 30, of Raglan Road, Handsworth, and Nathaniel Pope, 31, of Evans Street, Wolverhampton – who was her partner at the time – are standing trial for murder at Birmingham Crown Court.

Prosecutor Tony Badenoch QC told the court that the boy’s injuries could not be attributed to the ‘usual rough and tumble bruising on a child’ and some injuries ‘would have required stamping on his body, if it were laying upwards with a shod foot’.

He added that the injuries sustained caused a ‘massive’ internal bleed, which killed him.

Mr Badenoch said: ‘It was a brutal act perpetrated on a wholly defenceless three-year-old.

‘The degree of force required to cause these injuries would have resulted in extreme pain and fear. Throughout the assault, Kemarni would have been extremely distressed and fearful.

‘Kemarni would not have been capable of walking normally or climbing stairs without showing distress. Any adult caring for Kemarni would have been aware of it.’

The court was told how family members discovered bruising on the child’s body in the weeks leading up to his death, but they were blamed on Kemarni ‘fighting’ with other children, Birmingham Live reports.

Opening the case yesterday, Mr Badenoch said: ‘Urgent medical assistance was called at 3.49pm to attend to Kemarni at a two-bed flat in West Bromwich. On arrival, paramedics, arriving quickly, found Kemarni to be lifeless.

‘At the time, Watson was following instruction to conduct CPR and she was noted to be extremely distressed.

‘The man that was present in the flat, sitting in a chair close to Kemarni, did not say or do much. Kermani Watson Darby who died in suspicious circumstances

‘The efforts to save Kemarni’s life proved fruitless and his death was confirmed at 5.05pm that same afternoon.’

Brutal injuries suffered by Kemarni included multiple fractures to his rib cage, as well as wounds to his liver and colon. 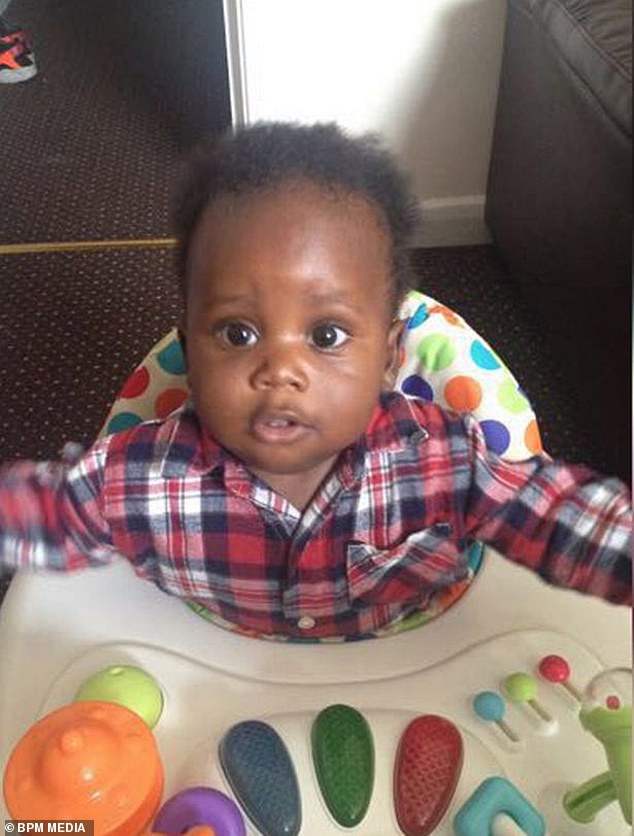 Kemarni’s (pictured) mother Alicia Watson, 30, of Raglan Road, Handsworth, and Nathaniel Pope, 31, of Evans Street, Wolverhampton – who was her partner at the time – are standing trial for murder at Birmingham Crown Court. They both deny murder and multiple child cruelty charges.

Bruising was uncovered on his lungs, head, mouth, neck, arms, chest, abdomen, back and legs.

The boy was also subjected to abdominal trauma which caused a fatal internal bleed, the court was told.

Mr Badenoch said: ‘[A pathologist] noted that Kemarni sustained horrendous injuries both that day and on earlier occasions.

‘The injuries were evident both externally, so on the skin surface, and internally when a post-mortem examination was conducted.

‘Amongst those injuries were multiple fractures to his skeleton, some of which would have required force akin to a road traffic accident or stamping on his body, if it were laying upwards, with a shod foot.

‘There was nothing to suggest that his small frame, body structures or blood constitution, was such as to render him unusually susceptible to injuries of this kind. He was a normal, boisterous, mischievous, three-year-old boy.

‘This was not the usual rough and tumble bruising on a child in the usual way of playgrounds, bumps, and the like.’

Jurors were told the couple ‘failed’ to care for the youngster, who would have been unable to ‘defend’ himself from multiple blows thrown at him.

Mr Badenoch added: ‘The multiple fractures to his skeletal frame and internal damage to his body structures revealed that he was subject to assaults and mistreatment.

‘It follows that Kemarni had been the subject of repeated and, in all probability, sustained assaults.

‘Those responsible for doing it would have known that it was extremely painful, not least because of the amount of force necessary to inflict these injuries. This is, therefore, not a case in which an accident can play any part.

‘Pope and Watson were responsible for his care and they lived together in a small flat.

‘The prosecution case is that they singularly failed in that respect, they were cruel to him and ultimately killed him.’

But Charles Sherrard QC, defending Watson, said the mother was not a ‘beast’ and ‘never knowingly’ exposed her son to suffering.

She ‘trusted’ Pope around her son but the brutal blows which killed Kemarni ‘can only and must have been inflicted by him’, the barrister alleged.

Addressing the jury today, Mr Sherrard said: ‘Watson sits before you charged with what no mother could ever contemplate – the murder of her own child, the boy she gave birth to, cared for and yes, loved.

‘She would do her best, not perfect, but always trying.

‘Issues we take [are] with the prosecution’s cherry-picked portrayal of her as a shocking, neglectful and some might say after [listening to the prosecution], a beast of a mother – and that is the overarching point we take issue with.

‘But of course, being a bad mother is not on the indictment. We ask you not to judge her until you have heard all the evidence.’

Jurors have heard how Watson ‘routinely abused drugs’, with neighbours recalling a ‘constant smell of weed’ in the communal foyer.

The mother was known to smack her child to discipline him as he was ‘particularly naughty’, they were told.

But she claims she was not in the family’s West Bromwich flat when her son suffered fatal injuries.

Mr Sherrard added: ‘On June 5, Watson did not kill Kemarni, she did not cause the death of Kemarni and neither did she have any idea of what appears to have been happening to him while she was out.

‘Watson never willfully did anything to her child to cause unnecessary suffering or harm.

‘She would be strict, even smack, but nothing more than that.’