These powerful images show the dedicated counter-terror police around the globe, including the US SWAT teams, French RAID agents and Israel’s elite Yamam force.

Some of the photos document training exercises, while others show the reality of operations in Boston following the marathon bombing in 2013 and in Paris after the Charlie Hebdo massacre in 2015.

The stunning images from a new book Fighting the War on Terror by Judith Grohmann show the innovative tactics being used to combat new terror threats and the advanced weapons technologies being deployed.

Grohmann was given insider access to the specialist counter-terrorism units of 16 countries across the world, including Russia, Britain, Italy, Slovakia and many more.

The men are trained to rescue hostages, incapacitate barricaded suspects, engage with heavily-armed criminals and in joining combined counter-terrorism operations.

Yamam soldiers are seen entering a building during a training exercise holding rifles fitted with laser sights. Yamam officers are required to be between 22 and 30 years old and must have completed three years of infantry service within the Israeli Defence Force prior to joining. Yamam men are taught basic Arabic and carry out operations in the Gaza strip and the West Bank 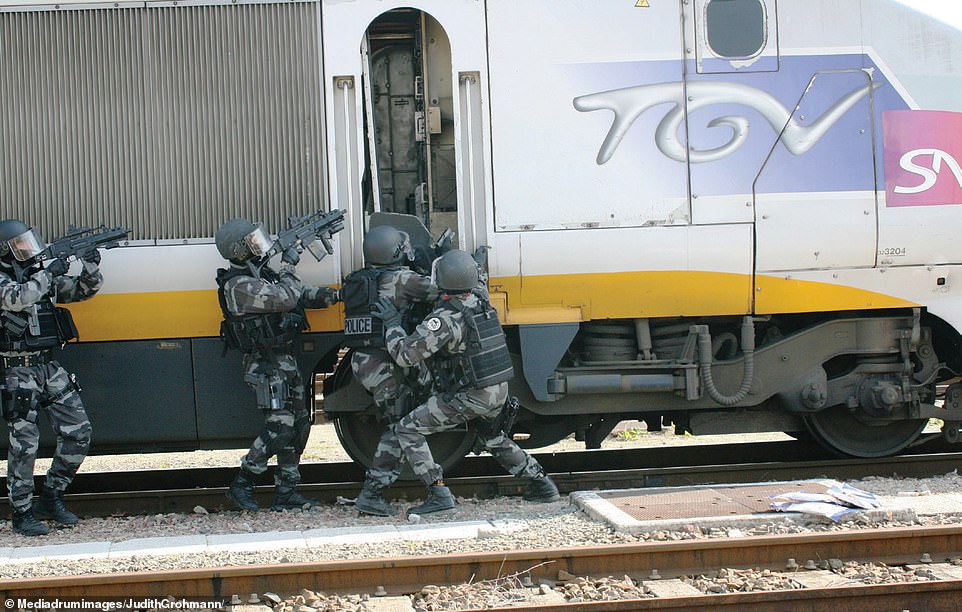 Members of France’s RAID unit are seen boarding the French high-speed TGV train in Calais, searching for three suspects that are supposedly hiding inside. Recherche, Assistance, Intervention, Dissuasion (Search, Assistance, Intervention, Deterrence), commonly abbreviated to RAID, is an elite tactical unit of the French Police. They were deployed during the 2005 and 2006 Paris riots and have subsequently seen a lot of action in recent years defending the city against terror threats, as in the attack on the Bataclan theatre 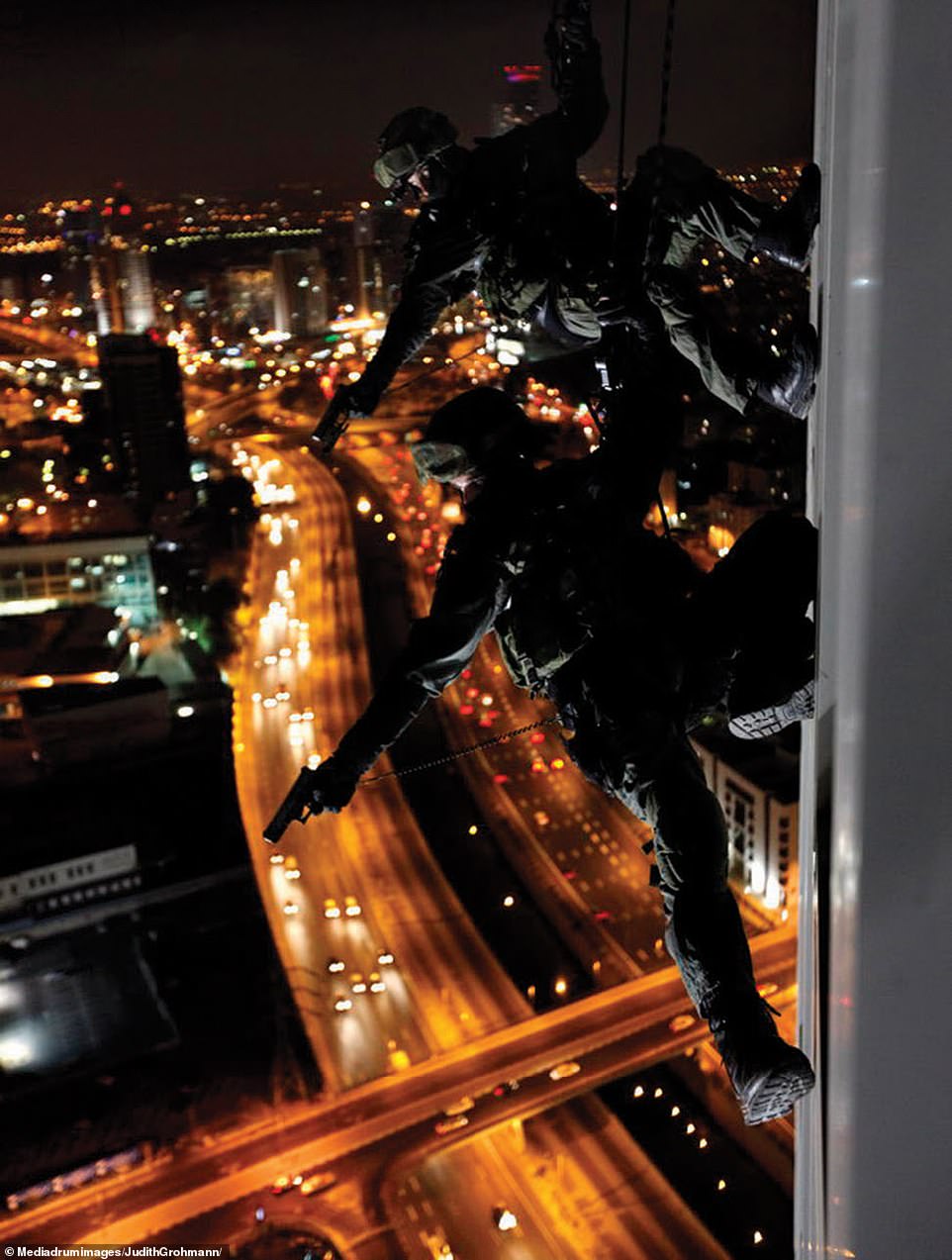 Members of the Israeli counter terrorism unit Yamam climb down a building at night to face a dangerous criminal. They are one of four specialist units of the Israeli Border Police and their duties include military, SWAT and undercover operations. The force was developed in the wake of the Ma’alot Massacre in 1974, when the Israelis decided they needed a fighting force for dangerous situations in their territory involving civilians 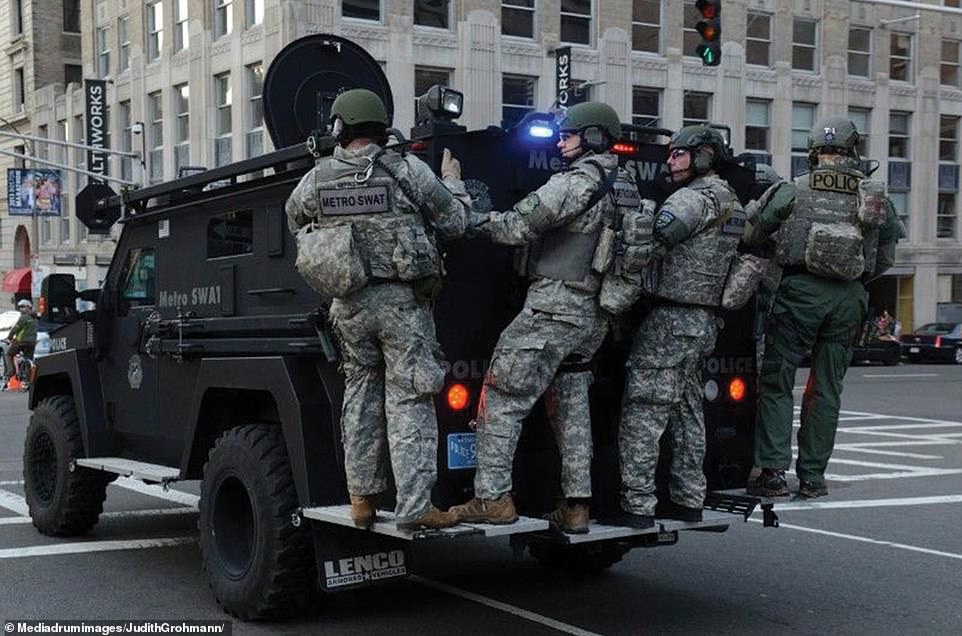 SWAT (Special Weapons and Tactics) team members heavily clad in armour and helmets stand on the back of a reinforced 4×4 as they scour the Watertown suburb of Boston, Massachusetts following the Boston Marathon bombings in April 2013. An enormous and unprecedented manhunt was launched to find Dzhokar Tsarnaev. The neighbourhood was locked down, transport networks were closed and Tsarnaev was eventually discovered hiding under a boat in a resident’s backyard. He was wounded by officers in a shootout and captured. 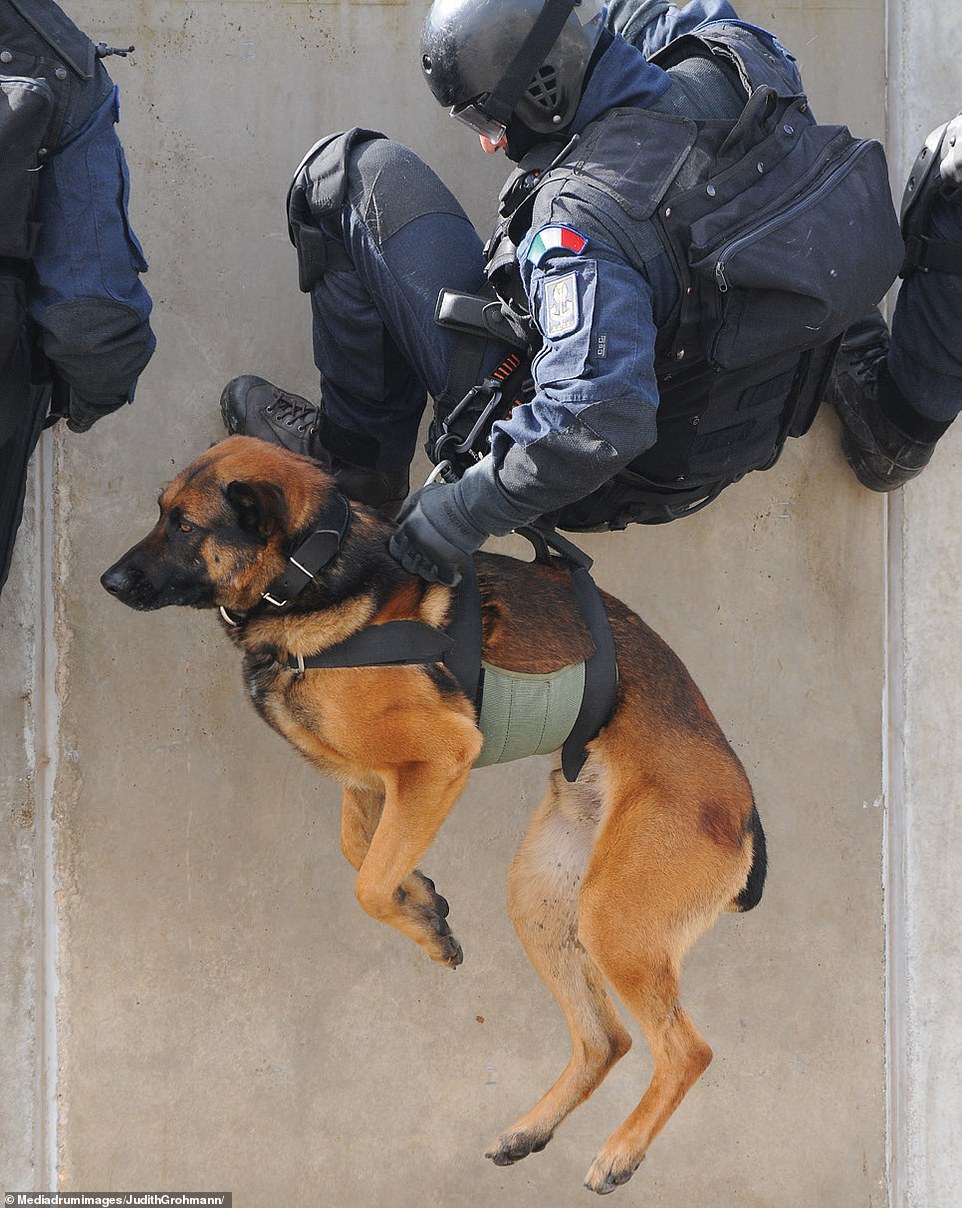 An Italian NOCS (Central Security Operations Service) dog is lowered alongside his abseiling master as they prepare to clear a building. The animals are deployed to sniff out explosives and booby traps and their loyalty and bravery are indispensable to the police. In 2017, NOCS revealed a woman named only as ‘Marta’ had joined their force – one of the first females in the world to join ranks with an elite police force 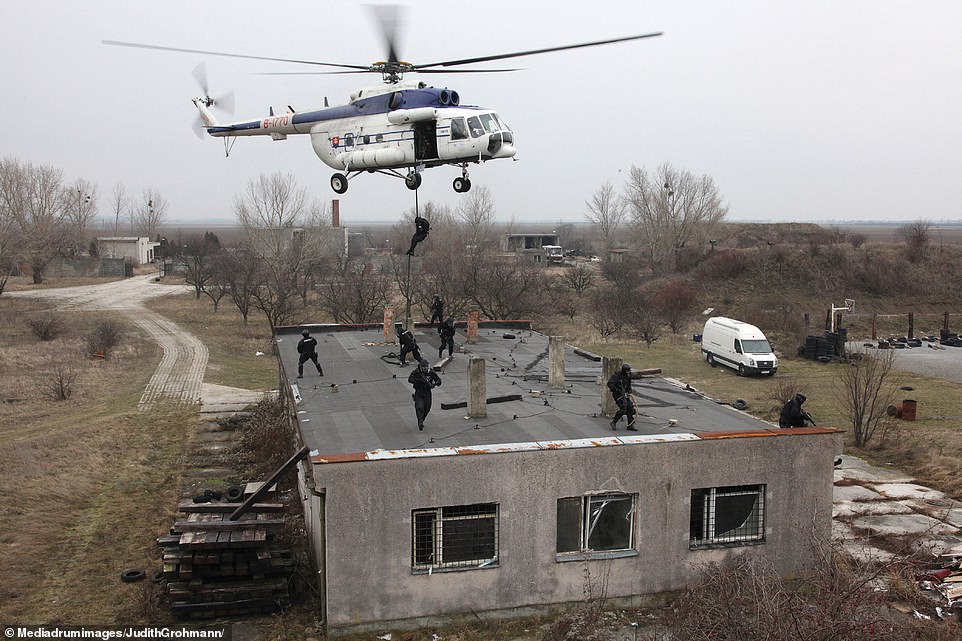 Members of Slovakia’s elite fighting unit LYNX drop onto the roof of a demolished house in the Dubravka area of Bratislava, the capital city. In this training exercise, kidnappers and their victim are hiding inside the building as members of LYNX position themselves across the top of the roof with their assault rifles as they prepare to breach and clear 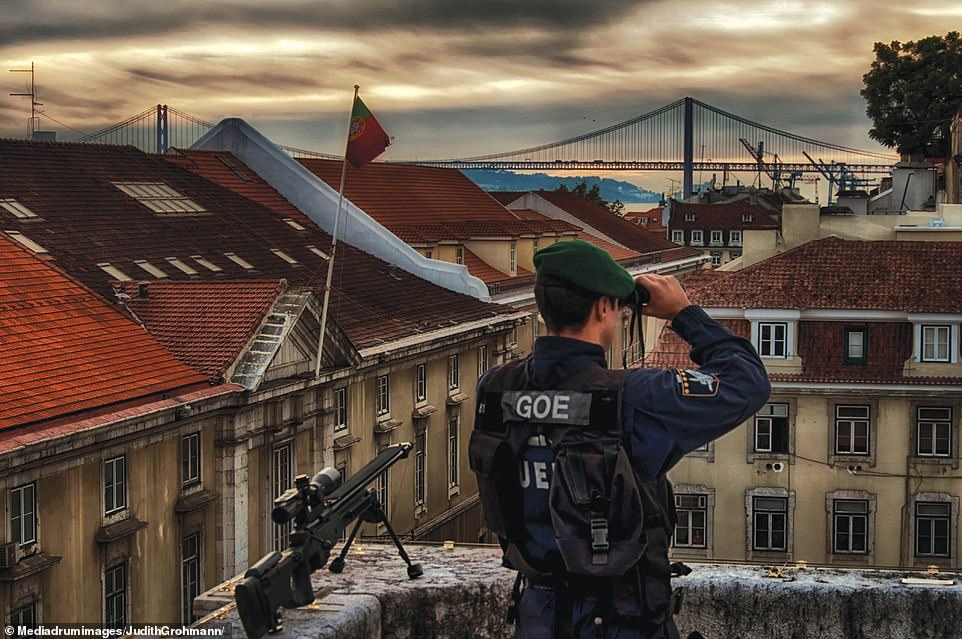 A marksman from the Portuguese specialist forces GOE (Grupo de Operações Especiais) uses his binoculars to peer into windows in the house opposite. Formed in 1989, the fighting force is an elite police unit of some 200 elite warriors who are deployed worldwide. Their snipers ordinarily use the German-made Heckler & Koch PSG1 or the Swiss-made SIG SG 550 rifles in their missions 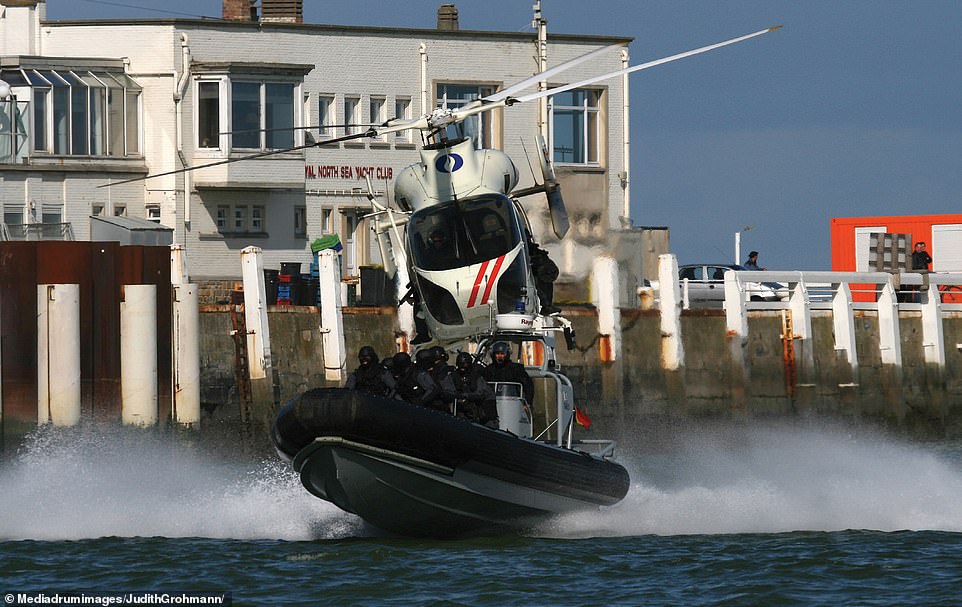 The Belgian special unit DSU travelling via helicopter and speedboat to Ostend, on the Belgian coast, to target criminals who are believed to be hiding on a ship. The force is made of some 500 highly trained officers who are deployed in tasks including hostage situations and also support the European anti-terror organisation ‘Atlas’ and can be sent abroad. 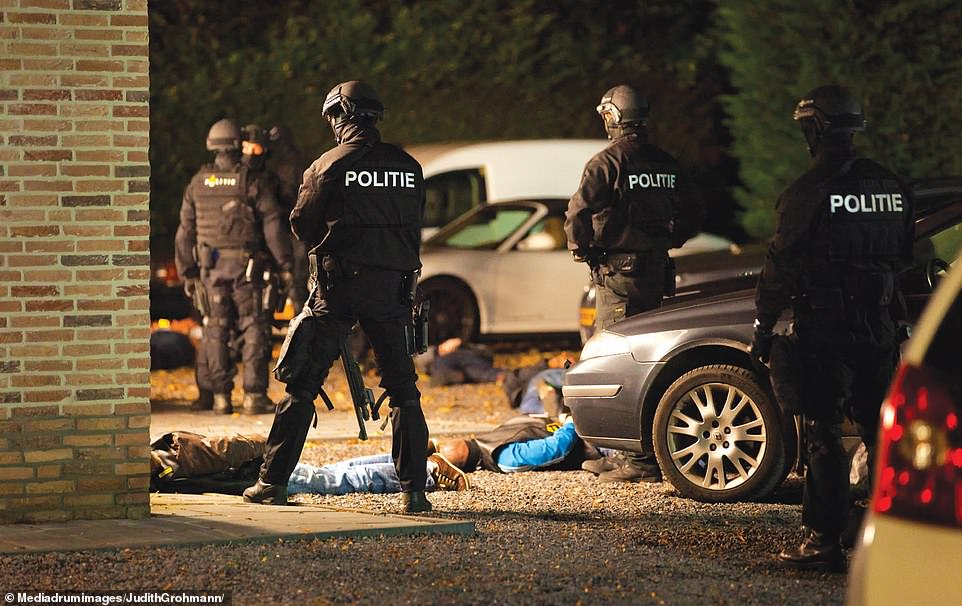 At midnight suspects are held by the Dutch police’s elite officers in Amsterdam. The DSI are a specialist anti-terror combined task force of the police’s SWAT units and the marines. The SWAT and marine units are further combined with the police’s marksmen to provide deadly counter-terror capabilities in urban environments. All of their men go through rigorous training including for aircraft hijackings and volatile hostage situations 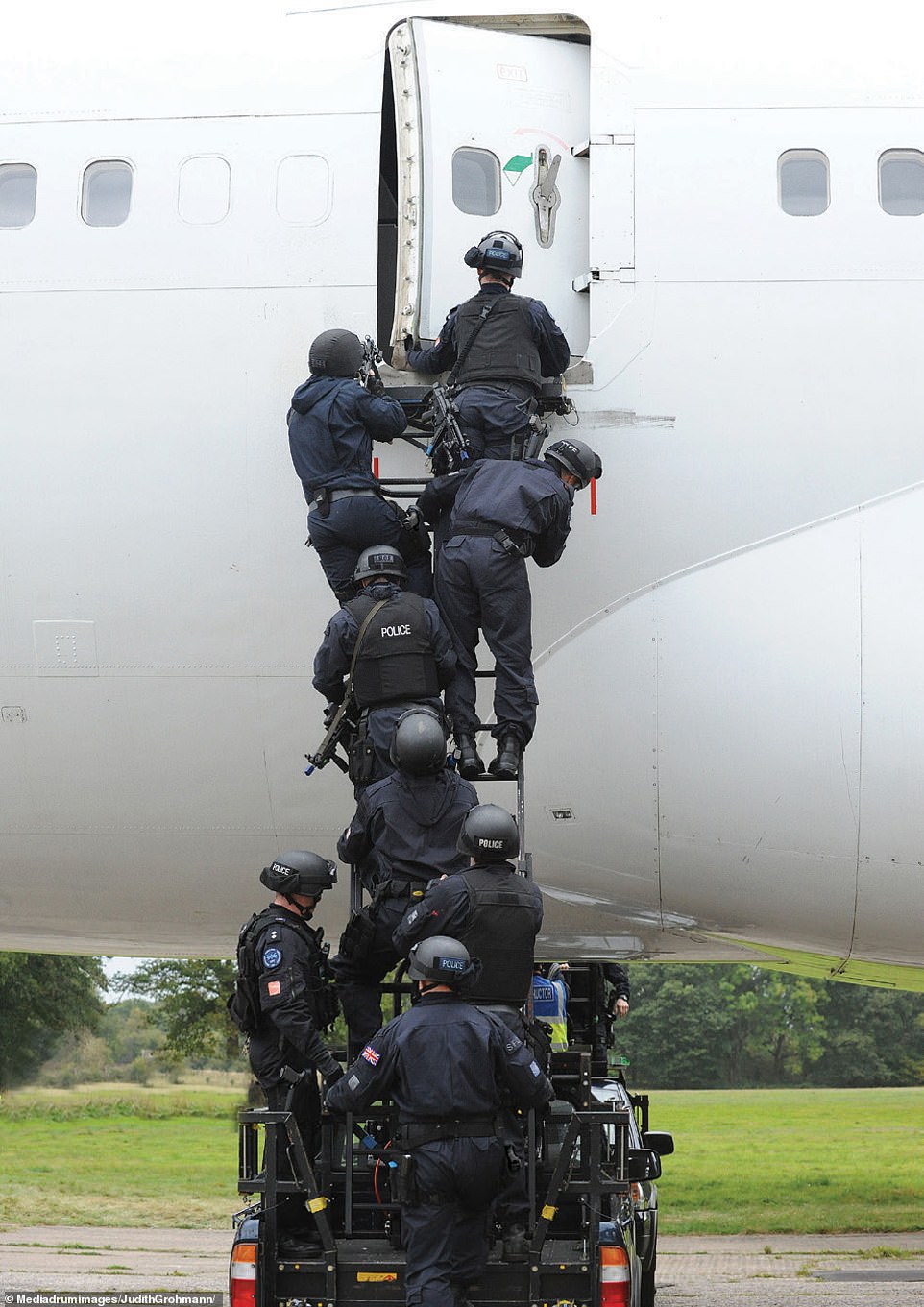 The UK’s elite SCO19 team uses a special car equipped with an extendable ramp, which can be used to scale high walls or, in this case, to board an aircraft in this training drill. SCO19 is the London’s Metropolitan Police Service’s specialist firearms unit and are on standby for any armed incident in the city. The force were deployed alongside the SAS during July anti-terror raids in 2005 to find men wanted in the aftermath of the 7/7 bombings 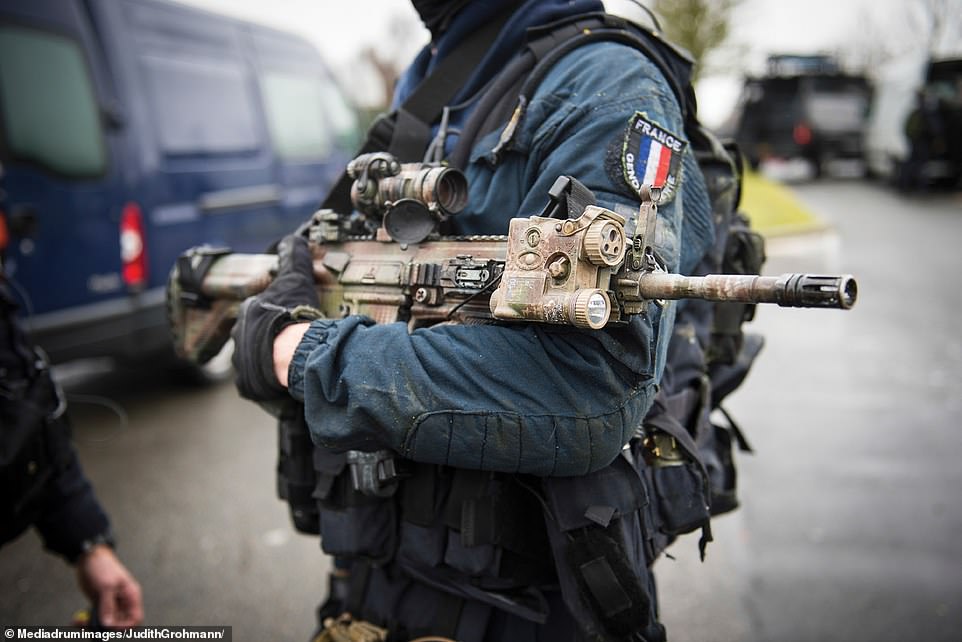 A member of RAID holds his FN SCAR assault rifle as he joins in the manhunt after the Charlie Hebdo attack in Paris in January 2015. Said and Cherif Kouachi forced their way into the offices of the satirical French weekly and killed 12 people and injured 11 others. Law enforcement caught up with them after their escape from Paris following a massive manhunt which lead them to an industrial estate around 19 miles northeast of Paris where the officers killed the men during a shootout 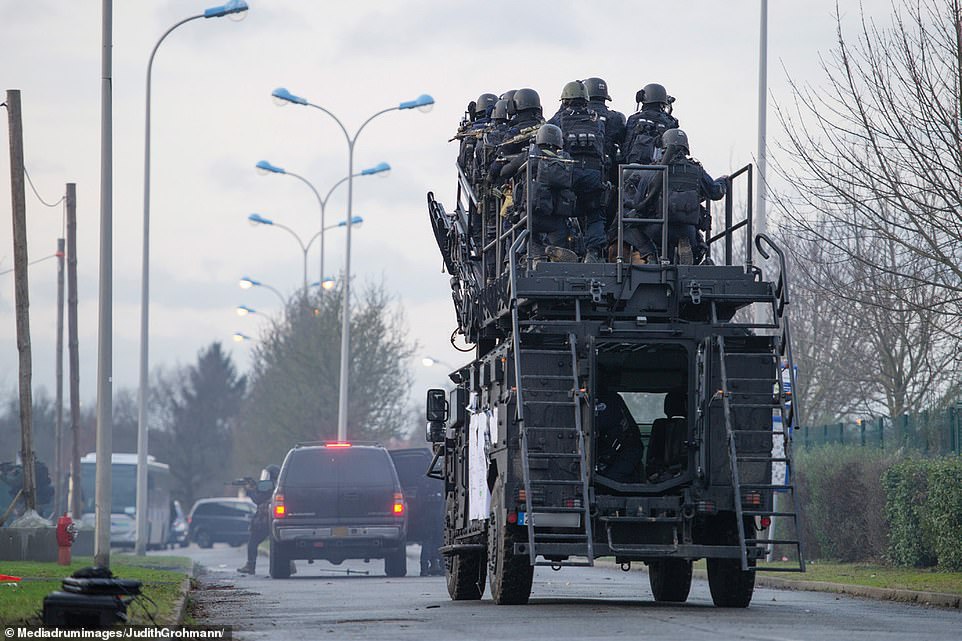 Members of the French National Gendarmerie Intervention Group (GIGN) stand aboard a police truck modified for rapidly scaling buildings and transported squads of men. They stand holding their assault rifled aloft as they prepare to take on the Charlie Hebdo terrorists at the industrial estate where the men were shot dead when they came out with guns blazing, two days after the atrocity in January 2015 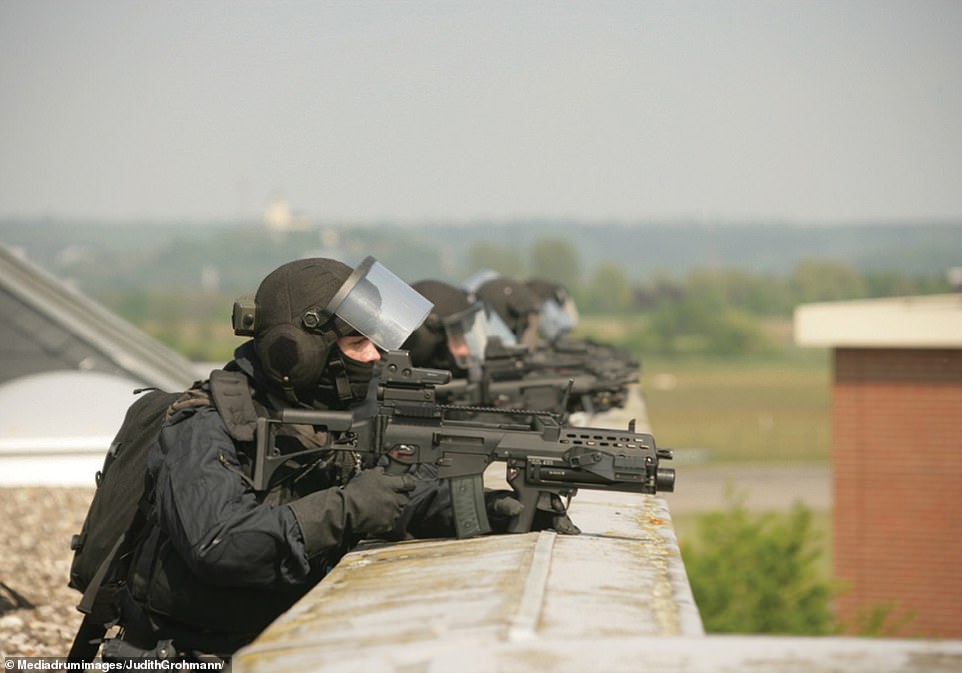 Marksmen from Germany’s elite police tactical unit GSG 9 (Border Protection Group 9) positioned on the roof of a building, ready for the operation. Their modular weapons are fitted with scopes and under-mounted grenade launchers capable of firing CS gas or explosives. After the 2008 Mumbai attacks, the Germans offered their assistance in having members of GSG 9 train India’s new counter-terror force 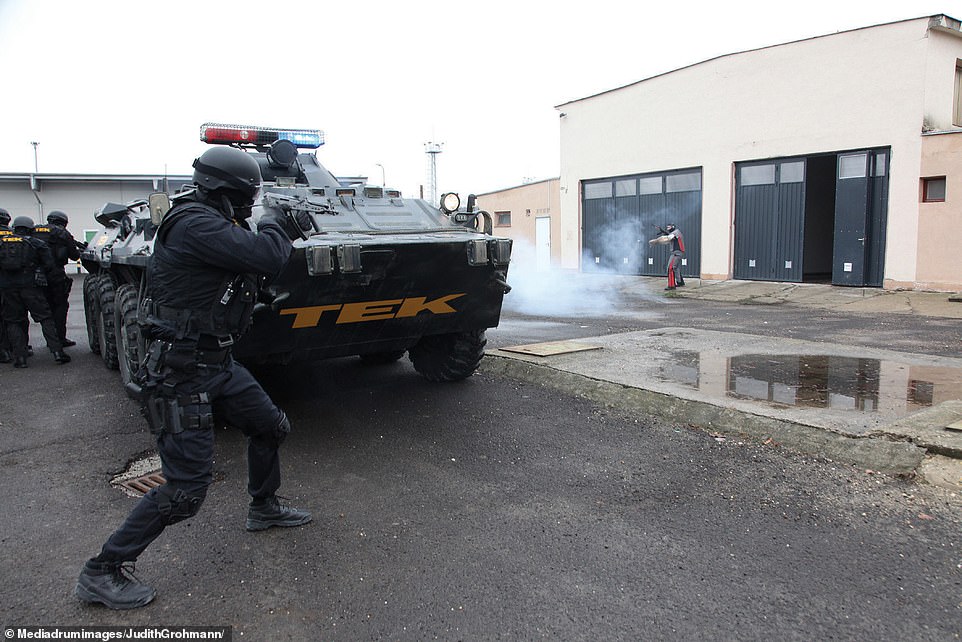 In this exercise by the Hungarian special unit TEK, a man has supposedly shot several people after escaping from prison. Stun grenades are thrown in his direction after he has taken up a defensive position. The men hold Skorpian sub-machine guns as they take cover behind a BTR-80 armoured personnel carrier. In addition to the BTR-80 the fighting force utilise armoured Audi Q7 SUVs 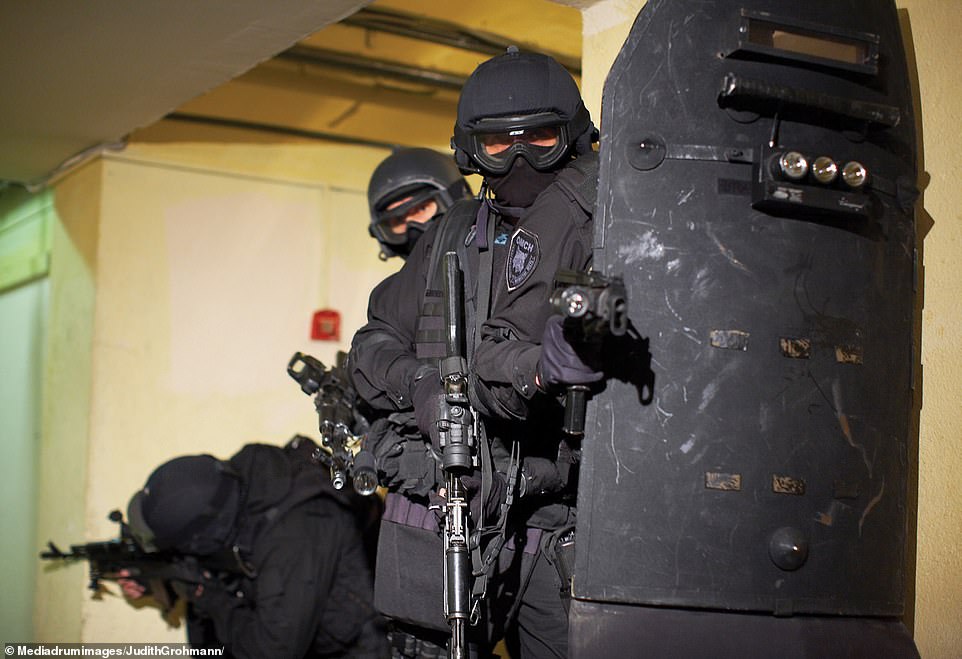 Tactical service shields protect the team from the Russian counter-terrorism unit SOBR (also referred to as spetsnaz) during deployment in a garage in Moscow. As well as carrying out specialised military police work, the force have been deployed in warzones, including in Chechnya in the 1990s. They are made up of around 5,000 officers with units for each city – for example SOBR ‘Viking’ from Kaliningrad and SOBR ‘Bulat’ from Moscow 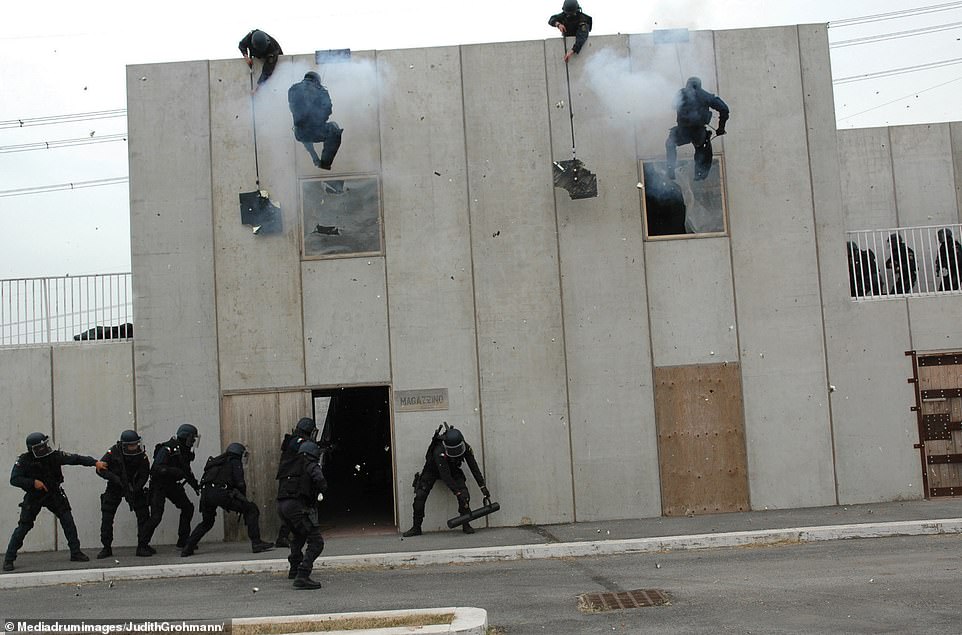 Members of the Italian special unit NOCS are training how to enter a house via the windows, balcony and doors, with explosives and battering rams. Elite fighting forces use breach and clear tactics which are designed to cause confusion to the enemy by coordinating strikes into several entry points, as above, the criminals are unable to react in time. 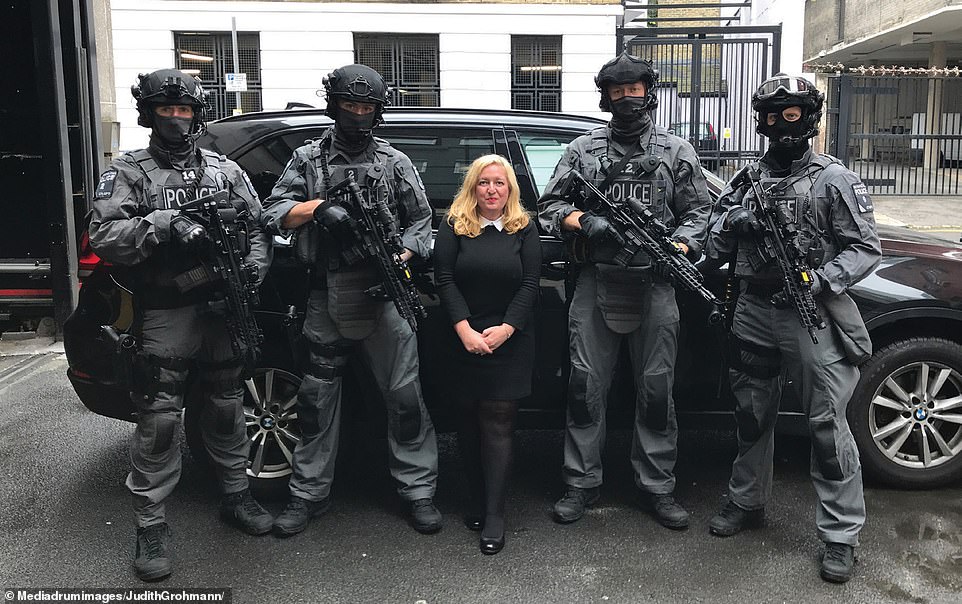 Author of Fighting the War Judith Grohmann poses with members of the British unit SCO19 in front of one of their specially modified BMW X5 SUV. The SO19 force were on the scene within minutes during the London Bridge attacks in 2017, alongside the City of London and Metropolitan Police Firearms Teams