Defiant campaigners opposing the UK’s largest infrastructure project have today clashed with workers as they refuse to leave a tree-top camp set up in ancient woodland.

Anti-HS2 protesters were confronted by officers for positioning themselves on an articulated lorry, while an activist last night claimed to have been assaulted by an employee at Crackley Woods, near Kenilworth, Warwickshire, which is set to be destroyed to make way for the high-speed railway.

It comes as the Extinction Rebellion and Stop HS2 groups have joined forces to reside at the makeshift camps over the last six weeks.

Their camp of around 20 tents and camper vans is said to feature a roundhouse built from hay bales, complete with a field kitchen.

Today, a campaigner in a hi-vis jacket had to be removed after climbing atop a truck on site, unfurling a banner reading ‘NHS Not HS2’,

Other demonstrators also appeared to be asked to move on by officers.

Police remove an anti-HS2 campaigner from an articulated lorry in Crackley Woods, near Kenilworth, Warwickshire, pictured 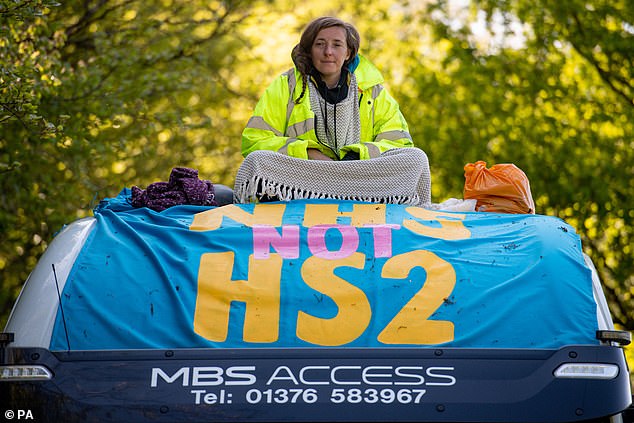 A campaigner in a hi-vis jacket climbed atop a truck on site and unfurled a banner, pictured, reading ‘NHS Not HS2’ 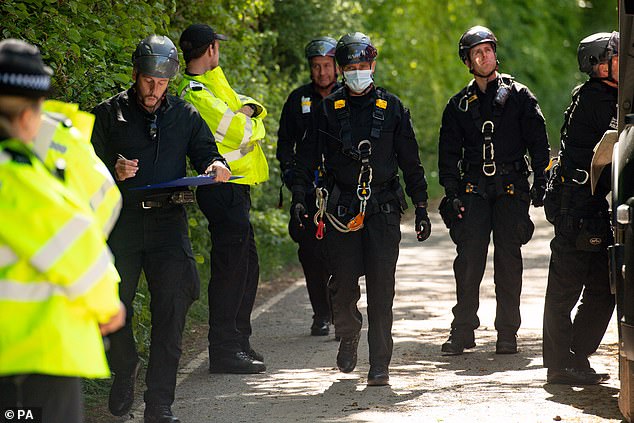 Police were on site, pictured, as the protest, which has been running for six weeks, continued today 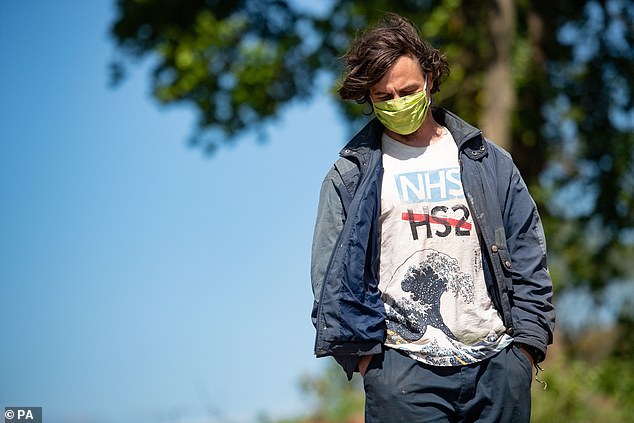 Pictured: A protester wearing a face mask and an NHS Not HS2 T-shirt on the site today 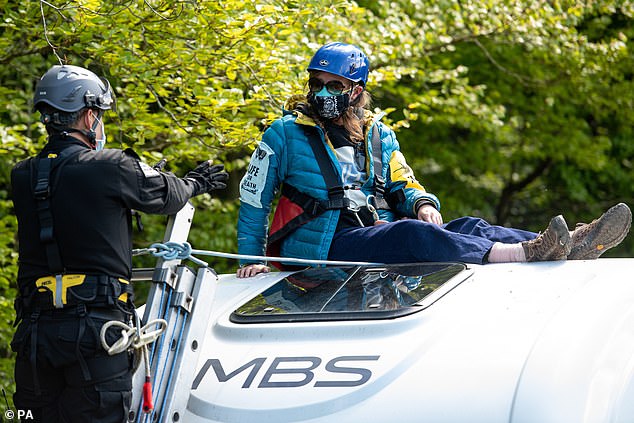 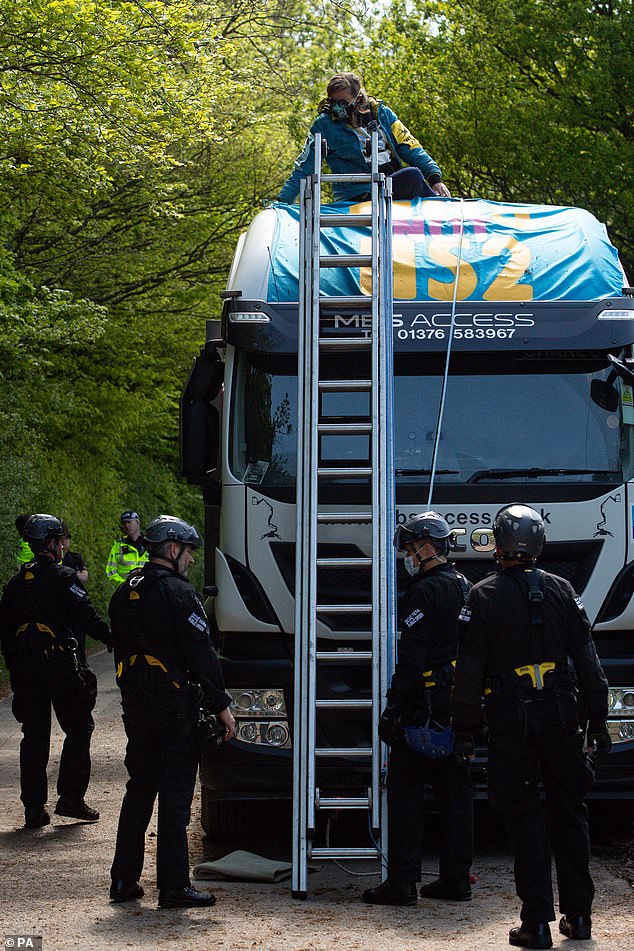 The demonstration, which has seen campaign groups join forces, has rumbled on for more than six weeks

In a video shared on social media by figures including TV naturalist Chris Packham last night, a protester can be seen accusing a security guard of injuring him.

The man is heard saying ‘they’re attacking us’ as footage shows what appears to be blood seeping from his head.

He adds: ‘One of the security hit me on the head repeatedly. I believe it was this man’.

He then points towards one of the workers as other campaigners demand the employee to provide his identity number.

Warwickshire Police said it had received a report of assault and was carrying out enquiries, while the contractor is also investigating.

It comes as claims have also been made that employees on site have been targeted and attacked during recent weeks.

Those at the so-called Protection Camp claim to be self-isolating amid the coronavirus crisis as one large household would, demonstrators said yesterday.

Supporters have been bringing the group food and care packages to leave at the edge of the camp as they continue to protest against the high speed rail link. 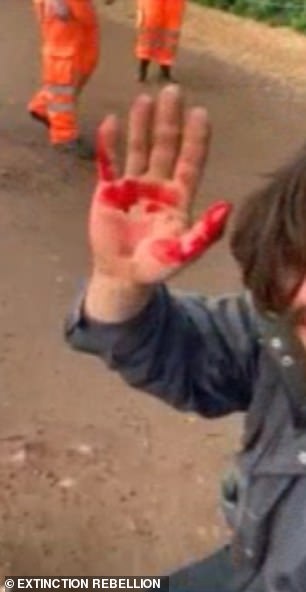 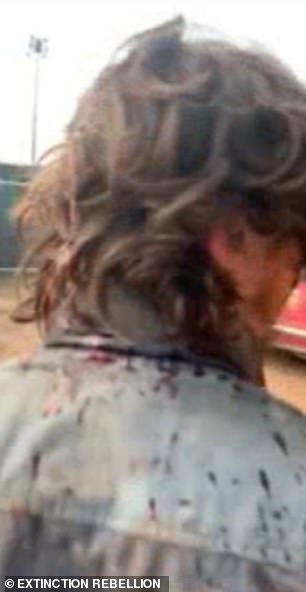 One of the campaigners holds up his hand, pictured left, and claims to be bleeding from the head, pictured right, after alleging he was assaulted

Campaigners say the ongoing work to HS2 should be classed as non-essential and is putting the lives of workers and their families at risk.

Environmentalists including Mr Packham are also angry that the development of the railway is leading to ‘irreversible destruction’ of ancient habitats and woodlands. 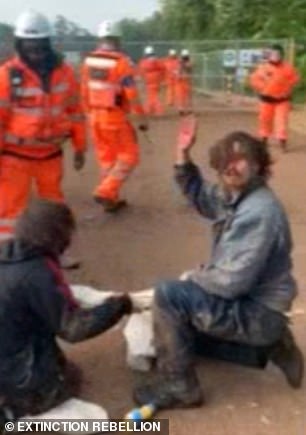 Warwickshire Police is investigating the alleged assault after a video, pictured, circulated on social media

Demonstrators arrived at Crackley Woods in March as trees in the woodland began to be felled, despite HS2 contractors erecting fences to keep protesters out.

The group instead built platforms in trees adjacent to the work site so they could see across the fence and witness what is happening to the woodland.

A spokesperson for HS2 insisted the demonstrators are not ‘living in trees’, but have instead travelled from across the country during the lockdown to set up a camp near the site.

More than 35 people are understood to have been arrested at the site since the protest began in March.

Campaigners have claimed some 108 ancient woods could be destroyed by the high-speed railway, though HS2 insists this is an exaggeration.

Paul Faulkner, chief executive of Greater Birmingham Chambers of Commerce, told the BBC only a ‘tiny fraction’ of the country’s ancient woodland will be cleared.

HS2 Rebellion says that health workers remain without personal protective equipment (PPE) and that money used for construction projects should be channelled to such medical supplies instead.

The protesters said they were respecting social distancing guidelines by wearing gloves and masks and claimed the actions were part of their state-sanctioned daily exercise. 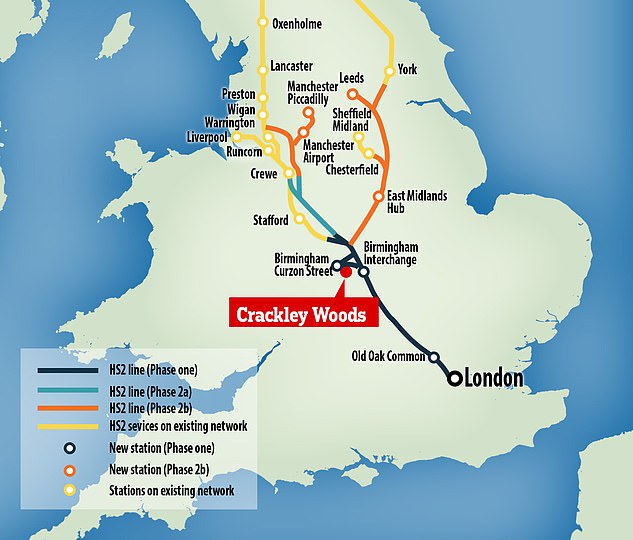 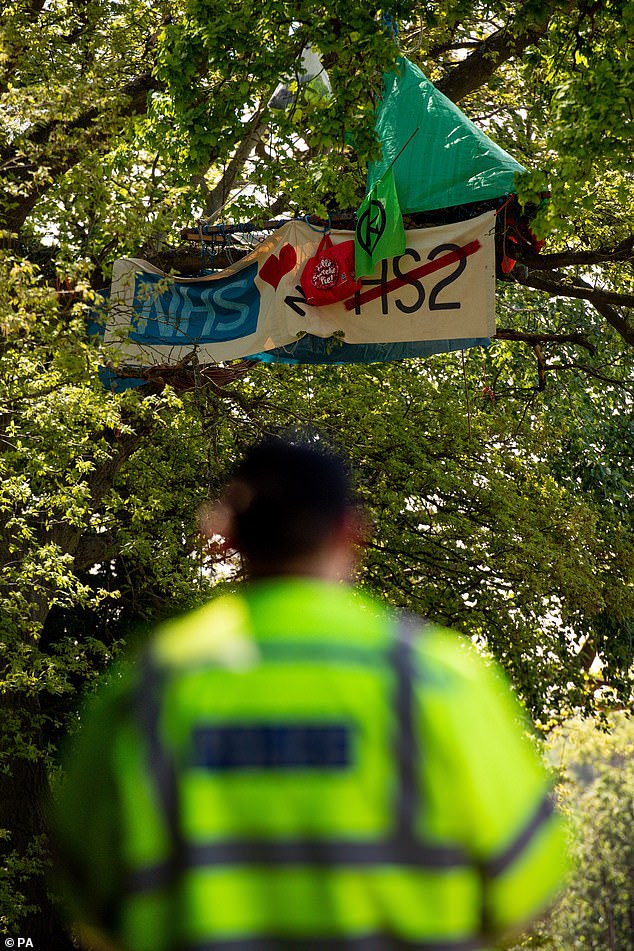 Defiant campaigners have refused to leave a tree-top camp set up in ancient woodland, pictured 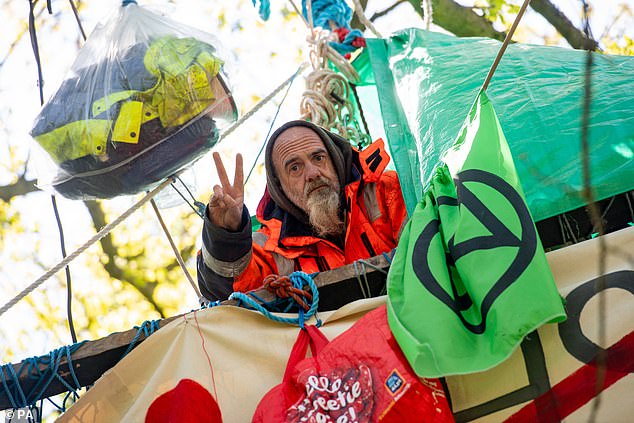 Campaigners, pictured, say the ongoing work to HS2 should be classed as non-essential and is putting the lives of workers and their families at risk

An HS2 spokesperson said: ‘The Government has given the green light to start building Phase One of HS2, which will generate thousands of jobs across the country and create 400,000 contracts opportunities, many for British small businesses.

‘This is an important investment in the UK’s future as we recover from the pandemic.

‘During the current health crisis, the actions of these Extinction Rebellion protesters have put our workers and the public at risk, and the emergency services under unnecessary strain.

‘All leading environmental organisations agree that climate change is the biggest future threat to wildlife and habitats in the UK.

‘By providing a cleaner, greener way to travel, HS2 will help cut the number of cars and lorries on our roads, cut demand for domestic flights, and help the country’s drive to a net zero carbon economy.

‘We’d urge all green groups to help us in getting people out of their cars, off planes and onto low-carbon, high speed rail.’