Cardinal George Pell entered the Victorian County Court on what would be his judgement day looking every bit a broken man.

While he stood tall and proud on entry, his powerful presence had been removed – just like the clerical collar he had worn in pubic for nearly all of his life.

The reporter had written a damning book about his alleged offending and now sat positioned directly behind Pell’s prosecutor alongside a number of complainants from an abandoned trial.

The hurls of abuse and heckling from Pell’s detractors – present at previous court appearances – was nowhere to be heard in and out of the courtroom on this momentous occasion.

At a pre-trial hearing, Judge Peter Kidd had warned those who abused Pell’s barrister Robert Richter, QC, that he would jail them if they played up.

It had been a quiet morning outside of court, with only a handful on protesters present along Lonsdale Street.

In the days of his trial, Pell had been shouted at and abused day in and out as he attended court.

Today they were outnumbered massively by reporters, who had come from across the country and the world to watch one of the most powerful men in the Catholic Church be sentenced.

Pell’s defence had protested against a television camera broadcasting the sentence live to the world.

But a cameraman stood in the area usually reserved for a jury to film every word.

The rest of the public was moved onto an adjoining courtroom where they were beamed in the live feed.

When Pell took his seat in the dock, he was surrounded by four burly guards – much like the men who will be his only point of contact over his ensuring years behind bars. 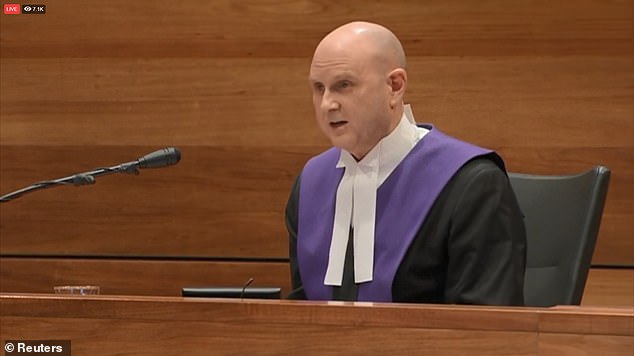 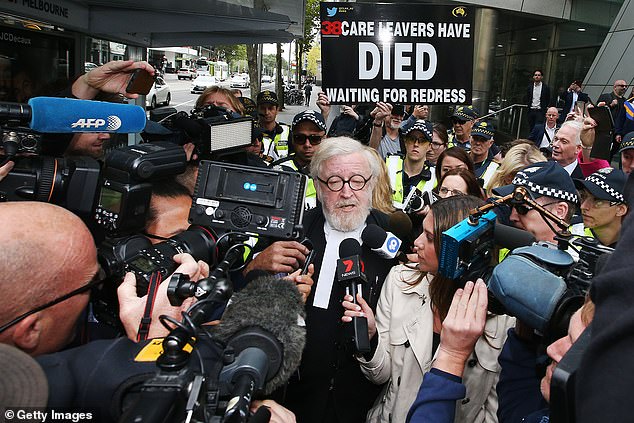 Pell’s barrister Robert Richter, QC, spent much of the hearing stroking his beard and staring directly at the bench in front of him

During his pre-sentence hearing, a confident Pell made it his business to eyeball anyone who stared at him – and there were plenty in the courtroom who did.

Pell would not break his gaze.

It was a different George Pell in the dock today.

Those that took only a passing gaze at him might say he showed no emotion at all.

But Pell’s body could not totally hide his inner emotions.

As the sentence kicked off, mention of his power within the church and his seniority caused Pell to rock back in his seat and straighten his slouched shoulders.

He would go onto do this repeatedly throughout the more-than-an-hour long sentence.

The disgraced Cardinal would take long, sustained blinks as Judge Kidd painfully outlined every detail of Pell’s past few years.

The media outrage, his vilification – albeit justifiably now – and the shocking details of the abuse of two choir boys in 1996 he had been found guilty of.

At times it appeared as if Judge Kidd himself was almost sympathetic to Pell – repeatedly mentioning that he had to act on the jury’s verdict.

But Judge’s Kidd’s ultimate sentence looked anything but sympathetic – at least to some of those within the media who had covered the majority of his trials. 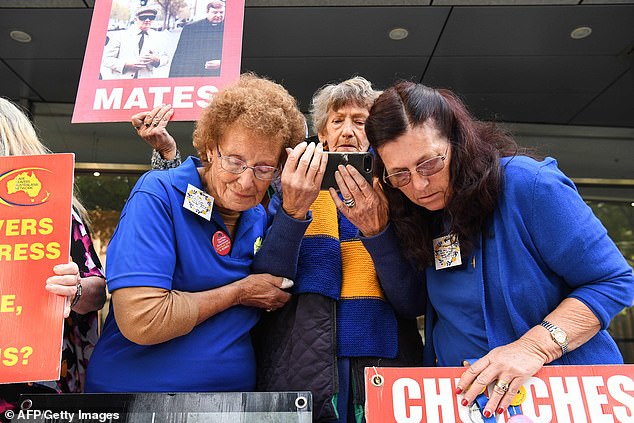 Sins of the father: Protesters were out in force at the sentencing of Australia’s most powerful Catholic cleric

Victims would later complain Pell had ‘got off easy’ and ‘deserved a bigger hit’.

Some had been tearful throughout the sentence – beacons of misery among a bunch of laptop pounding journalists.

In the back row of the courtroom an artist glared at Pell as she no doubt created a masterpiece of him seated in the dock.

Pell cleared his throat after Judge Kidd described his attack on a young choir boy as ‘nasty’.

Mr Richter, who fought so hard to clear Pell, spent much of the hearing stroking his beard and staring directly at the bench in front of him.

As Pell’s mental capacity was aired, the Cardinal removed his glasses and casually scratched his eye with the tip.

He combed his hand through his hair when his breach of trust was mentioned and again cleared his throat when his power at St Patrick’s Cathedral was raised.

When Judge Kidd said Pell would often go in and congratulate the boys after choir, Pell’s lips pursed together even tighter. 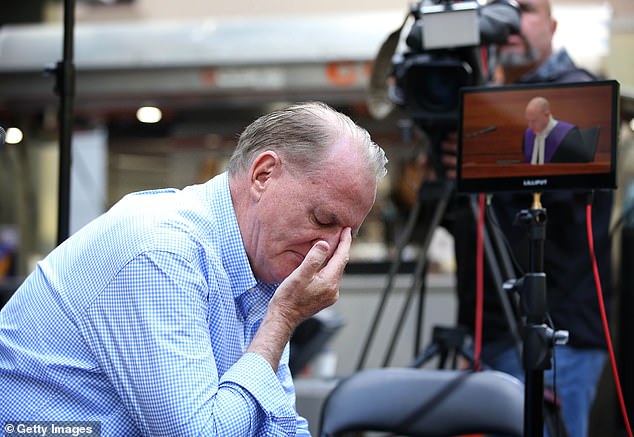 Overwhelmed: The jailing of Cardinal George Pell brought forward a flood of emotions for some outside the sentence hearing

It was as if in his mind, this was the only ounce of truth in the entire sentence.

For more than half an hour Pell copped a tirade of Judge Kidd’s accusations and assesment.

But Pell again lifted his shoulders and sat proud when it was suggested he might be at the end of his days.

After 53 minutes, Pell took his first swig of water from a paper cup.

It had been a tiring sentence for all involved.

Pell began to stretch out his dodgy knee and appeared uncomfortable.

Even Judge Kidd stumbled a couple of times and was forced to restart his sentence.

But as the time drew nearer to his ultimate doom, Pell began to become more active.

He adjusted his hair, took another swig of water and cleared his throat.

With a strong right hand, he pulled himself to his feet.

The once untouchable George Pell – the third most powerful man in the Catholic Church – was handed a maximum sentence of six years, to serve at least three years and eight months in jail.

There was hardly a sound.

Pell signed some paperwork and bowed before being escorted out of court by the armed guards to begin his sentence.

Some in court embraced.

Outside court police were given three cheers by those still milling about.

But the cheers might need to be saved until June, when Pell returns to court to appeal his conviction and now, quite possibly, his sentence.