Defiant property executives who attended the Presidents Club gala have defended the event, with one saying it was no worse than a ‘rugby club dinner’.

Downing Street said reports of scantily-clad female hostesses being flashed and groped at the event showed there was ‘a long way to go to ensure all women are treated properly as equals’.

But two industry figures who joined 300 guests at the fundraiser in Mayfair’s Dorchester hotel hit back against the criticism.

One man who works in the property industry told the Financial Times: ‘They are not underage girls, they are all over 18, they know what they are doing.

‘They all know it’s a bit racy. There is free champagne, they can have a drink, they have fun. Do things happen after? God knows. They can always complain to the police if so.’

Another attendee described the event as being like a ‘boys’ night out’ or a ‘rugby club dinner’ during which some, but not all, men may have misbehaved.

Out of the 21 tables at the black-tie gala, 10 were sponsored by property companies, according to the FT.

It was claimed last night that prostitutes were at the event where billionaires bid up to £400,000 for lots including a night at a strip club, tea with Bank of England governor Mark Carney, and lunch with Boris Johnson.

Yesterday the row over the dinner saw one of the organisers quit a Government job, questions in Parliament, several charities handing back donations and the Presidents Club announcing that it would permanently close. 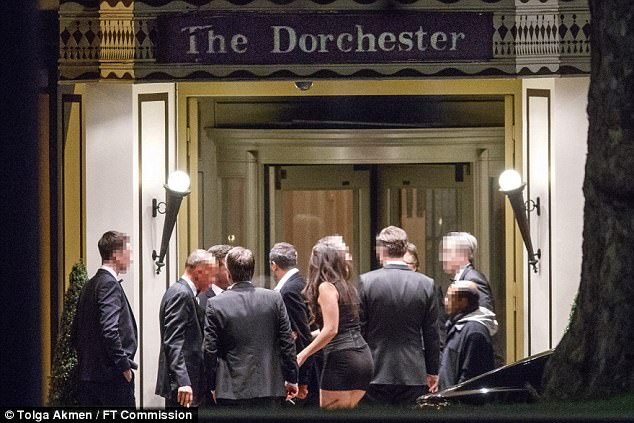 One attendee described the event as being like a ‘boys’ night out’ or a ‘rugby club dinner’ during which some, but not all, men may have misbehaved. Pic: Guests outside the hotel

Millionaire Tory MP Mr Zahawi was last night hauled in for a ‘dressing down’ by Chief Whip Julian Smith. Sources said Mr Smith wanted to ‘establish the facts’ about his attendance.

A Government source said Mr Zahawi was ‘reminded of his obligations and responsibilities’, adding: ‘He was told it is not appropriate to attend events of this sort.’

A No 10 source said Mrs May was ‘appalled’ by the revelations about the dinner, which were uncovered in an investigation by the Financial Times.

Mr Zahawi was still in post last night. But a senior Tory said he was on ‘very thin ice’. Sources suggested he could face the sack if more revelations emerged. No 10 was unable to say whether other ministers had attended the event.

The fundraiser boasted of being the ‘most un-PC event of the year’. It prompted an Urgent Question in the Commons where it was accused of ‘crimes against a decent society’. Among yesterday’s developments:

÷Two hospitals said they would return the charity’s donations; 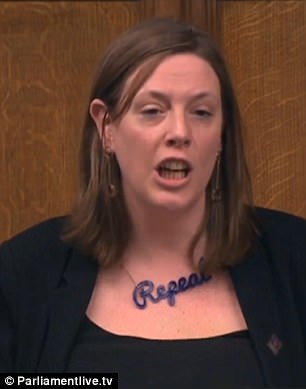 Labour MP Jess Phillips said in Parliament yesterday: ‘Women were bought as bait for men … it is totally unacceptable’

÷Presidents Club trustee David Meller quit his roles at the Department for Education and the Mayor’s Fund for London;

÷The Presidents Club announced it would close, as the Charity Commission said it was looking into the allegations;

÷The Mail has seen diktats from previous fundraisers in which hostesses were ordered never to reveal anything about the night.

Undercover FT reporter Madison Marriage who attended the event described how she and other women were ordered to wear figure-hugging dresses, matching knickers and ‘sexy shoes’, and women reported being groped multiple times with ‘hands up skirts, hands on bums …

‘The worst I was told by one of the hostesses was a man taking his penis out … The other one was another man telling a hostess to … rip off her knickers and dance on the table.’ Men asked hostesses to join diners in bedrooms in the Dorchester, it was claimed.

A second hostess who spoke anonymously to ITV News said: ‘The men were treating them like sex workers.’ Mr Zahawi tweeted: ‘I do unequivocally condemn this behaviour. The report is truly shocking. I will never attend a men-only function ever.’

But according to BBC Newsnight, he attended before he was an MP in 2010. A senior No 10 source said the minister had told them he left ‘before the hostesses were introduced’. But the FT reporter said the women were introduced as the event began at 8pm. Labour MP Sarah Jones said: ‘If it transpires that the minister did not report his concerns and that he was there on previous occasions … he needs to resign.’ Fellow Labour MP Jess Phillips added: ‘Women were bought as bait for men … it is totally unacceptable.’

Mr Zahawi was seen in the Commons talking with education minister Anne Milton, who told MPs: ‘It is quite extraordinary to me that in the 21st century allegations of this kind are still emerging.’

Businessman Mr Meller, 58, quit his role a non-executive board member of the DfE in the wake of the allegations, she added.

Great Ormond Street Hospital and Evelina London Children’s Hospital are among causes to have benefited from £20million raised by the Club over more than 30 years. They said they were shocked and were returning donations.

A No 10 spokesman said Mrs May had full confidence in Mr Zahawi, despite being ‘uncomfortable’ with the men-only nature of the event.