A shocking video of unrepentant jihadi brides being transported to a refugee camp after being rescued from ISIS’s final holdout in Syria has emerged, showing them shouting abuse and pledging loyalty to the terrorist group.

The short clip shows women dressed head to toe in black, holding their young children, on the back of a truck taking them from ISIS’s final frontier in Baghouz to a refugee camp.

They are heard shouting ‘baqiya’, from ISIS’s motto ‘baqiya wa tatamaddad’, which means ‘remaining and expanding’, and screaming abuse at journalists, throwing water at the camera filming them.

Many of them, along with the young children, are seen pointing their index fingers to the sky in a gesture used by ISIS supporters to proclaim the oneness of God, and show unity to their so-called ‘caliphate’.

Women fleeing Baghouz last week were seen throwing rocks at journalists, and attacking female reporters for not dressing according to their interpretation of Islam.

One ISIS bride was seen grabbing the uncovered hair of a female reporter, saying: ‘Have you not read the Koran, are you not ashamed?’

A third woman snarks at the way the reporter is dressed: ‘God curses women who resemble men’, as the group shouted in unison: ‘The Islamic State is here to stay!’

The SDF are closing in on diehard jihadists and their relatives holed up in a makeshift encampment inside the village of Baghouz.

All in black: Dozens of women covered in black are waiting for bread and water after fleeing ISIS’s last holdout – the town of Baghouz 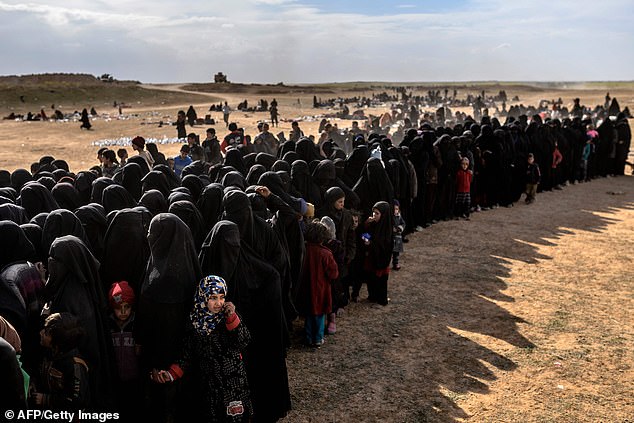 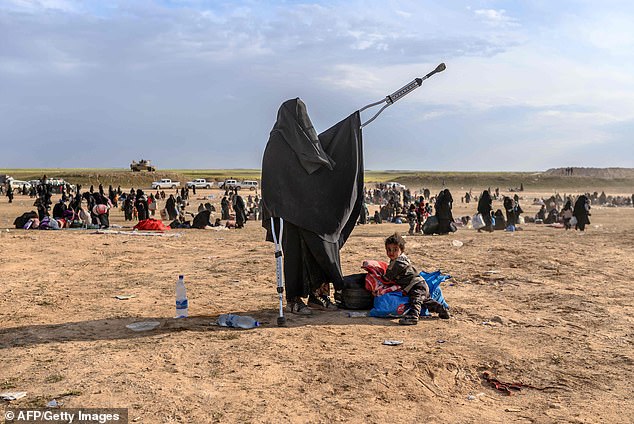 More than 7,000 people have fled the bombed-out bastion in recent days, escaping shelling by the SDF and air strikes by the US-led coalition against ISIS/

Many women tell AFP that they want to raise their children on the ideology of the caliphate, even as its territorial presence fizzles out.

One woman, who says she is from Damascus, told AFP: ‘We have left, but there will be new conquests in the future’.

Speaking from behind a veil that covers her face, she says: ‘We will seek vengeance, there will be blood up your knees.’

This comes as the United Nations’ Children Fund (UNICEF) warned that children raised in ISIS’s now-crumbled ‘caliphate’ should not be treated as terrorists. 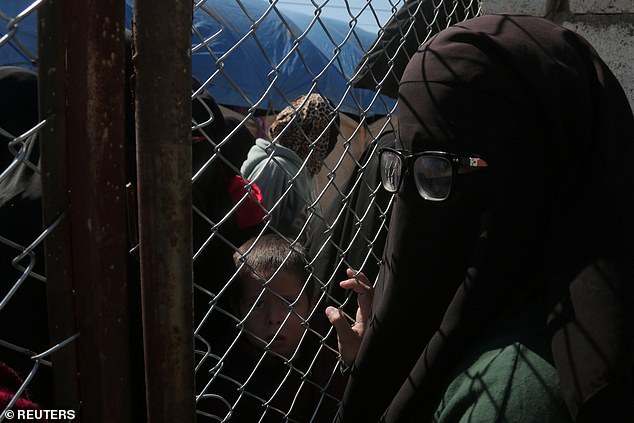 A woman looks through a chain linked fence at al-Hol displacement camp in Hasaka governorate. Foreign ISIS women at the camp have been attacking other women for not complying with the so-called caliphate’s laws 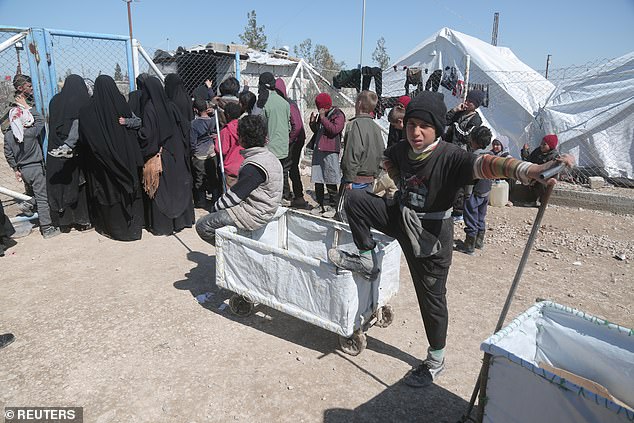 People gather near the fence of al-Hol displacement camp in Hasaka governorate. On Friday, dressed head-to-toe in black and wearing full face veils, the foreign ISIS women gathered behind a fence with a locked gate

‘The message that these children are not wanted is growing stronger and stronger,’ UNICEF’s Middle East director Geert Cappelaere said at a press conference in Beirut.

According to UNICEF, an estimated 3,000 foreign children are currently housed at the Al-Hol camp which has taken in most of the massive influx of people fleeing the scrap of the IS ‘caliphate’ in recent weeks.

They originate from at least 43 different countries, many of which have been reluctant to tackle the issue of their possible repatriation.

There are even larger numbers of displaced Syrian and Iraqi children who are associated with IS and whose reintegration in society is a challenge that is getting scant attention.

‘This is a problem that cannot be swept under the carpet,’ said Cappelaere, speaking at the launch of a CD of children’s song coinciding with the eighth anniversary of the conflict in Syria.