By Jake Nisse and Alex Raskin For Dailymail.com

Jackson State coach Deion Sanders is preparing to accept the head coaching job at Colorado, according to a new report.

Sanders confirmed earlier this week he was offered the Colorado job, while also noting it was not the only offer he had received.

‘I’m not going to sit here and tell all my business, but they’re not the only ones,’ Sanders ahead of his 11-0 team’s SWAC title game Saturday vs. Southern.

And according to ESPN, Sanders and his associates have ‘spent the week making inquiries to both potential members of his on-field staff and support staff at Colorado.’

The report even said Sanders had reached out to a ‘prominent’ player in the NCAA transfer portal and told him to stall his decision because he wanted him in Boulder.

Sanders’ arrival at Colorado is reportedly expected this weekend by Colorado staff.

‘They’re not doing a great job of hiding this,’ a staff source told ESPN. ‘If he backs out of this deal, it would be a huge problem for Colorado.’

Hired by Jackson State in September 2020 after coaching his sons at a Texas high school, Sanders called the fit ‘a match made in heaven.’ He quickly lifted the school in Mississippi’s capital to SWAC champion in one calendar year.

The Tigers followed up a 4-3 finish in a pandemic-delayed spring season with an 11-2 showing last fall, a remarkable jump led by Sanders’ son Shedeur Sanders at quarterback. They lost to South Carolina State in the Celebration Bowl. 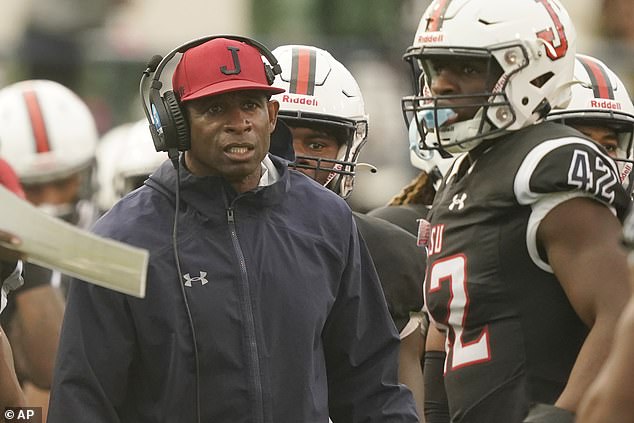 Sanders has also scored on the recruiting trail, landing five-star defensive back Travis Hunter and four-star receiver Kevin Coleman for this year’s unbeaten squad. Sanders told The Associated Press in an October podcast that both players chose JSU because he and his staff will prepare them for careers in the NFL.

The 55-year-old — or whoever the new coach may be — would step into a Colorado program that’s a long way from its glory days under Hall of Fame coach Bill McCartney, who led CU to a national championship after the 1990 season.

The Buffaloes have had only one full-length winning season since joining the Pac-12 in 2011.

Meanwhile, Sanders has gone 26-5 his past three seasons at Jackson State.