Deliberately infecting healthy Britons may be the only way to test a COVID-19 vaccine if the crisis is brought under control, a top researcher has claimed.

Sir Terence said the most probable way vaccine research will move forward is if healthy, young people are purposely exposed to the deadly virus.

The controversial move wouldn’t be without risks, he admitted. And whether ethic committees will even permit it would pose the biggest challenge.

But scientists have previously said such an approach could shave months off the race to find a vaccine, with almost 3.6million cases now confirmed globally.

Normally in large-scale trials, participants will be given the vaccine and mingle among society to see if the jab is effective at preventing them picking up the virus – in this case SARS-CoV-2.

But lockdown will make it difficult to assess how successful a vaccine is because it is preventing the spread of the virus – a fear already expressed by University of Oxford researchers, who are leading the first vaccine trial in Britain. 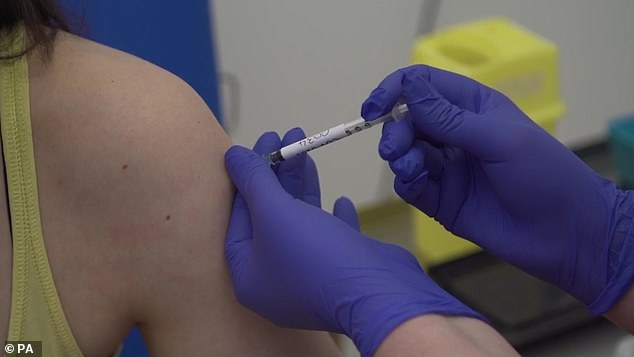 The Oxford vaccine trial started testing its vaccine called ChAdOx1 nCoV-19 on humans on April 23 (pictured, a participant).  But lockdown will make it difficult to assess how successful a vaccine is because it is preventing the spread of the virus

HRA has accelerated vaccines – including the one developed by Oxford University – into clinical trials within days, instead of months.

It has so far recruited more than 47,000 participants for 113 COVID-19 research trials, including for drugs like remdesivir and hydroxychloroquine.

The Phase I clinical trial will study safety and efficacy in healthy volunteers aged 18 to 55 years, across five trial centres in Southern England.

It has recruited 1,100 people, half of whom will receive the vaccine and the other half (the control group) receiving a widely available meningitis vaccine.

Boris Johnson hosted a global summit yesterday as he urged countries around the world to unite and help pay for the development of coronavirus vaccines and treatments.

The Prime Minister said the world needed to come together ‘against our common enemy’ as he boasted of the UK’s £744 million commitment to a global response war chest.

He said every nation needed to help create an ‘impregnable shield around all our people’ in the form of a vaccine.

The virtual summit was attended by Canada, France, Germany, Italy, Japan, Norway, Saudi Arabia and the European Commission – but the US and China chose not to attend.

In his message to the summit, Mr Johnson said: ‘I’m delighted that the UK is co-hosting this summit and joining forces with all of you against our common enemy, the coronavirus.

‘In our own countries, we have taken extraordinary measures, asking our people to accept sweeping restrictions on their way of life, and by doing so, we have formed a human shield around our health systems, enabling our heroic health workers to save many lives – including my own.

‘But the truth is that none of us can succeed alone.

‘To win this battle, we must work together to build an impregnable shield around all our people, and that can only be achieved by developing and mass producing a vaccine.’

Mr Johnson said ‘the more we pull together and share our expertise, the faster our scientists will succeed’ in developing vaccines and treatments.

‘The UK is the biggest donor to the efforts of the Coalition for Epidemic Preparedness Innovations to find a vaccine,’ he said.

‘We have committed up to £744 million for the global response to coronavirus, including our pledge of £388 million for the vital research and development of vaccines, treatments and tests, and that is the focus of today’s conference.’

The PM insisted the ‘race to discover the vaccine to defeat this virus is not a competition between countries but the most urgent shared endeavour of our lifetimes’.

This is technically known as phase two of a vaccine trial, where the scientists test the vaccine against a placebo and work out the correct dosage.

The first phase, which is a safety run where a small number of people are given the dose to see how the body reacts, is being run at the same time.

If this work is successful, it will move forward into studies to see if the vaccine works against the real virus spreading in the community.

Normally phase three – the final stage of testing – involves hundreds, sometimes thousands, of people across multiple sites for a long period of time.

Amid the COVID-19 pandemic, Sir Terence told The Times there were broadly three ways this part of the trial might be run.

The most standard and straightforward way would be to give half study participants the vaccine, half a placebo, and see if infection rates are higher in either group.

This would only be possible if there were still new coronavirus cases occurring in the UK.

Should the UK be in the position of ‘not having much coronavirus infection’, a second option would be trialling the vaccine in another country where the virus is still spreading.

‘The third possibility, and probably the most contentious, that would have to come to a research ethics committee, is the idea of giving some people the vaccine and then deliberately exposing them to the virus,’ said Sir Terence.

‘Presumably, if you were to do that you would choose healthy young people with no other conditions, but it wouldn’t be without risk.

‘It’s certainly not for me to give a judgment on whether that would be approved or not: giving ethics approval does not sit with the chairman.

‘But my sense, having talked to people in the field and to some people on the research ethics committee, is that that is something they would have to look at very carefully.’

Lawrence Young, a professor of molecular oncology at the University of Warwick, told MailOnline infecting healthy people with the virus would speed up finding a vaccine.

He said: ‘There are clearly ethical issues in exposing otherwise healthy individuals to a potentially lethal virus. But the only way to fast-track a vaccine for CoV-2 is to test by deliberate infection of individuals.

‘We know that the majority of individuals infected with CoV-2 undergo a mild cold-like infection – and that this is more likely in fit, young individuals. If we also had a good anti-viral drug (perhaps remdesivir) then it would be even safer to perform a post-vaccination exposure trial.’

University of Oxford have said if transmission levels of COVID-19 levels drop, it could be six months before they know if the ChAdOx1 nCoV-19 vaccine works.

If transmission remains high, the team could get data within a couple of months. 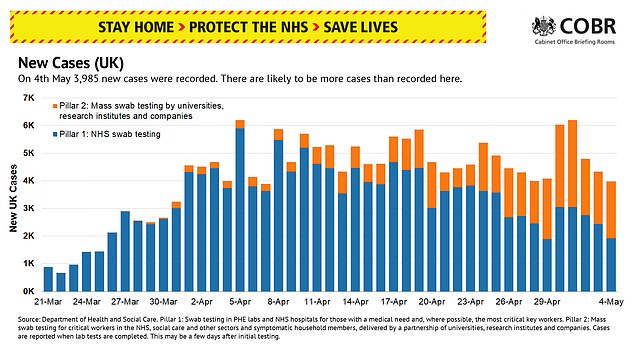 Professor Sarah Gilbert, who is running the Oxford University trial, said they may have to continue their trials in other countries where more of the virus is circulating in the community 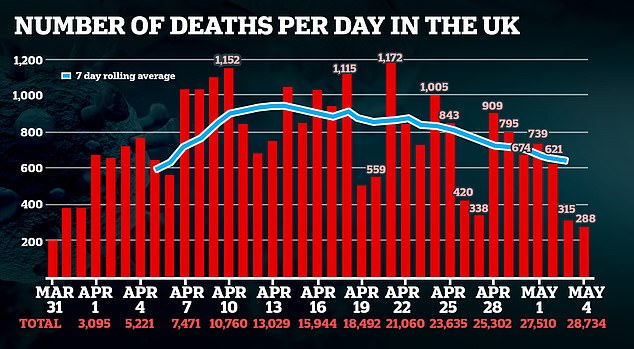 Yesterday Britain’s daily coronavirus death toll rose by 288 – the lowest 24-hour jump since the end of March. But top statisticians say thousands of British care home victims are still being missed in the official count

Professor Sarah Gilbert, who is running the Oxford trial, said they may have to continue their trials in other countries where more of the virus is circulating in the community.

VACCINES CREATED BY OXFORD AND IMPERIAL COLLEGE: WHAT ARE THE DIFFERENCES?

The lead of Britain’s other vaccine contender, at Imperial College London, has said they are in the same position.

Robin Shattock, a professor of mucosal infection, said last week: ‘If social distancing and lockdown work really well, it will take us longer to determine whether a vaccine works.’

Imperial is recruiting volunteers for clinical trials to begin in June. Professor Shattock said the early volunteers would be given low doses of the vaccine to test its safety.

Purposely infecting healthy volunteers with the virus would speed up finding a vaccine, it has previously been argued by Dr Peter Smith, from the London School of Hygiene and Tropical Medicine, and colleagues at Harvard University and Rutgers University in New York.

They said relaxing current rules around clinical trials could ‘accelerate’ the roll-out of a jab, and that every week a vaccine is delayed it will be ‘accompanied by many thousands of deaths globally’.

‘It may seem impermissible to ask people to take on-risk of severe illness or death, even for an important collective gain.

‘But we actually ask people to take such risks for others’ direct gain every time we ask volunteer firefighters to rush into burning buildings.’

Yesterday Prime Minister Boris Johnson insisted the ‘race to discover the vaccine to defeat this virus is not a competition between countries but the most urgent shared endeavour of our lifetimes’.

About 100 research groups around the world are pursuing vaccines against the coronavirus, with nearly a dozen in early stages of human trials or poised to start.

The World Health Organization and Britain’s chief scientific adviser Sir Patrick Vallance have repeatedly said a safe vaccine is at least 12 to 18 months away.

But the Oxford team are ‘confident’ in their vaccine and have made arrangements to produce the dose by the billion by late summer.

There were 3,985 new cases of the coronavirus announced yesterday, with 190,000 Britons now having been infected.

But the number of new cases identified depends on testing, which has increased dramatically over the past couple of weeks.

Deaths have slowed when looking at a seven day rolling average. Figures show the UK’s crisis is continuing to slow down after peaking in mid-April.

But top statisticians say thousands of British care home victims are still being missed in the official count because the figures only include patients who have tested positive in a laboratory.