Delightful photos celebrate 100 years of women in the Met Police

A special service of thanksgiving is being held at Westminster Abbey today to mark 100 years since women were first allowed to join the Metropolitan Police.

Today’s event will echo a similar one on May 17, 1919, which was held to honour fallen police officers from World War One.

It was the first time female police officers wore their uniforms in public.

And a century later, today’s Met police women will stand in replica 1919 uniforms on the Clive Steps in Westminister and pose for the same picture.

Some 2,000 people are set to attend the service today which will include a range of testimonies and readings by women officers of varying ranks and departments, including a recollection of the 1919 service written after it took place by Lilian Wyles, the Met’s first woman in CID.

In 1919 women were never sworn into the force and there were just 21 women patrols.

Policewomen didn’t have the power to make arrests and they were paid less than men.

Cressida Dick became the Met’s first female Commissioner when she was appointed in 2017.

She said: ‘One hundred years ago today, on 17 May 1919, Met Police women appeared in public for the first time at a special service at Westminster Abbey held to honour the losses of officers in the first world war.

‘A century on, in 2019, I am delighted that Westminster Abbey will once again host a unique service and welcome on this occasion not just a handful, but thousands of Met police women, who will represent even more of their colleagues.’ 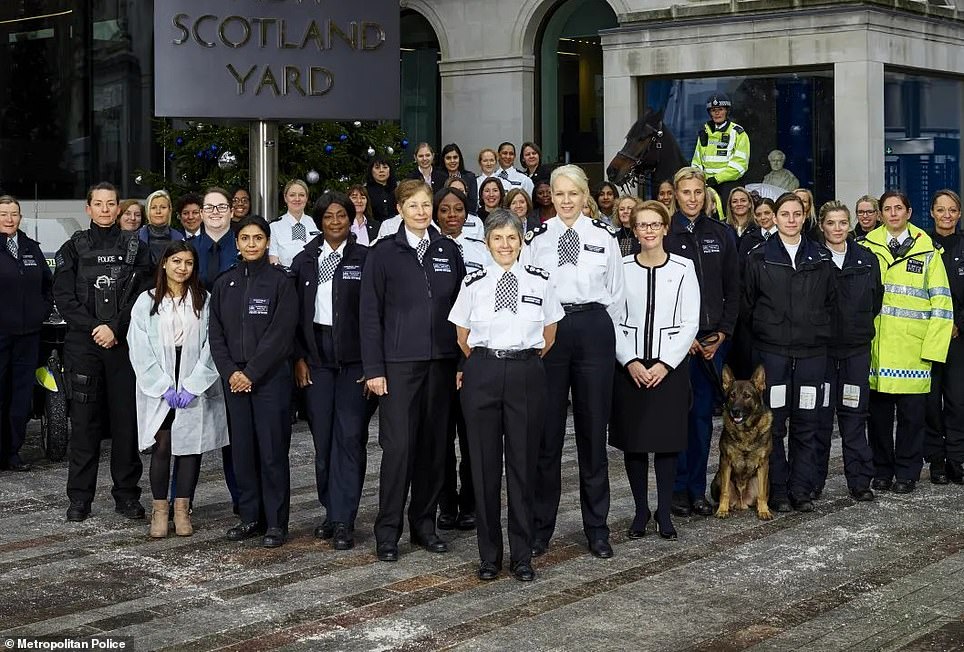 A special service of thanksgiving is being held at Westminster Abbey today to mark 100 years since women were first allowed to join the Metropolitan Police. The service will echo a similar event held in 1919 where policewomen wore their uniforms in public for the first time 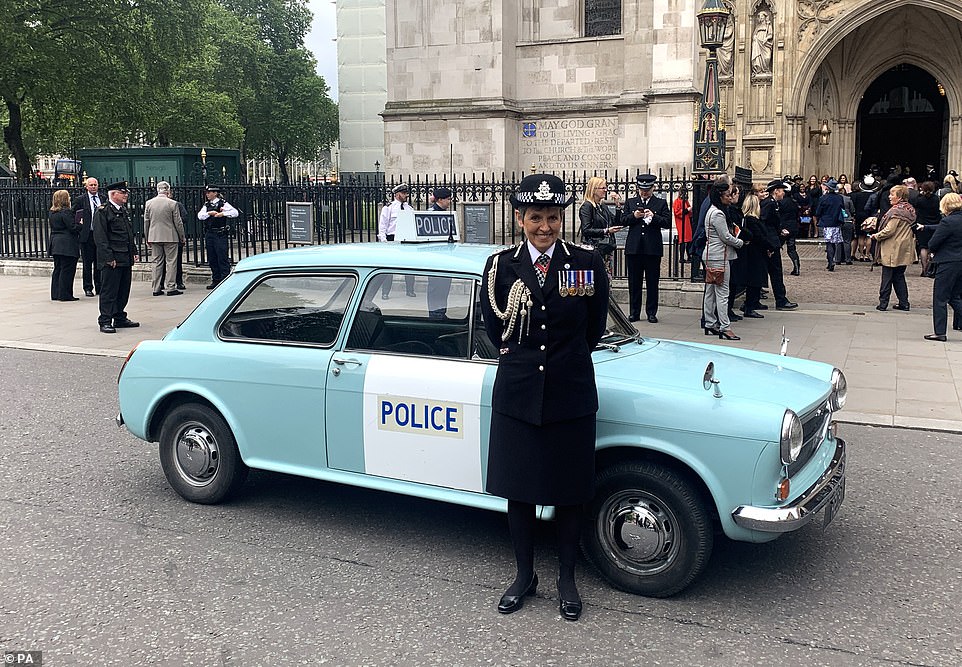 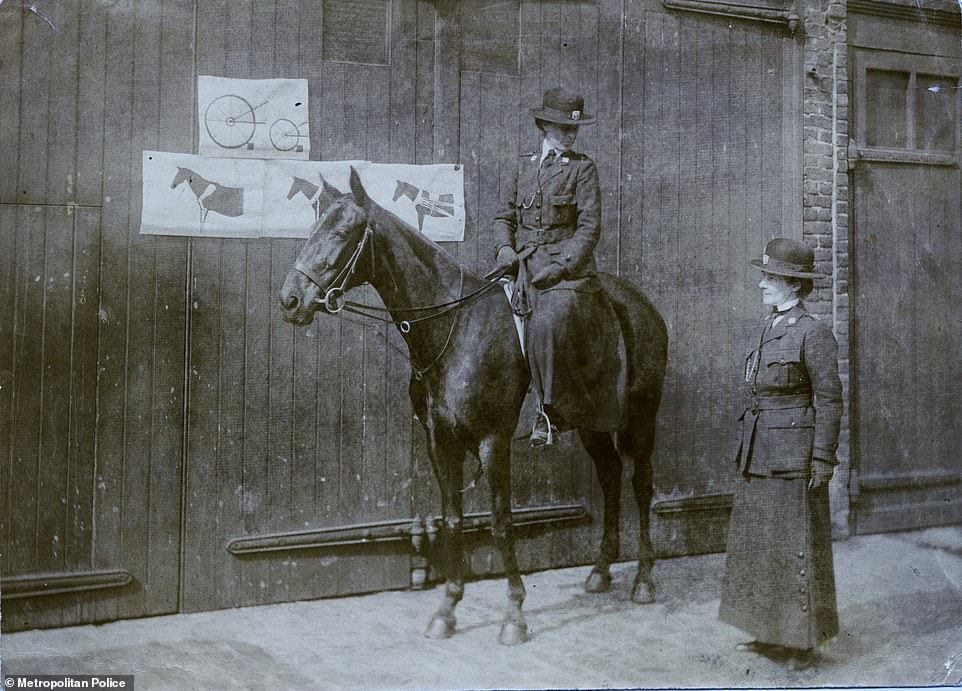 It wasn’t until 1918 that women were allowed to apply to work for the Metropolitan Police. As part of the application requirements, candidates had to be at least 5’4. Pictured are policewomen Eva Christy (on horseback) and Nina Boyle in the 1910s. Ms Boyle was also a journalist and campaigner for women’s suffrage and rights 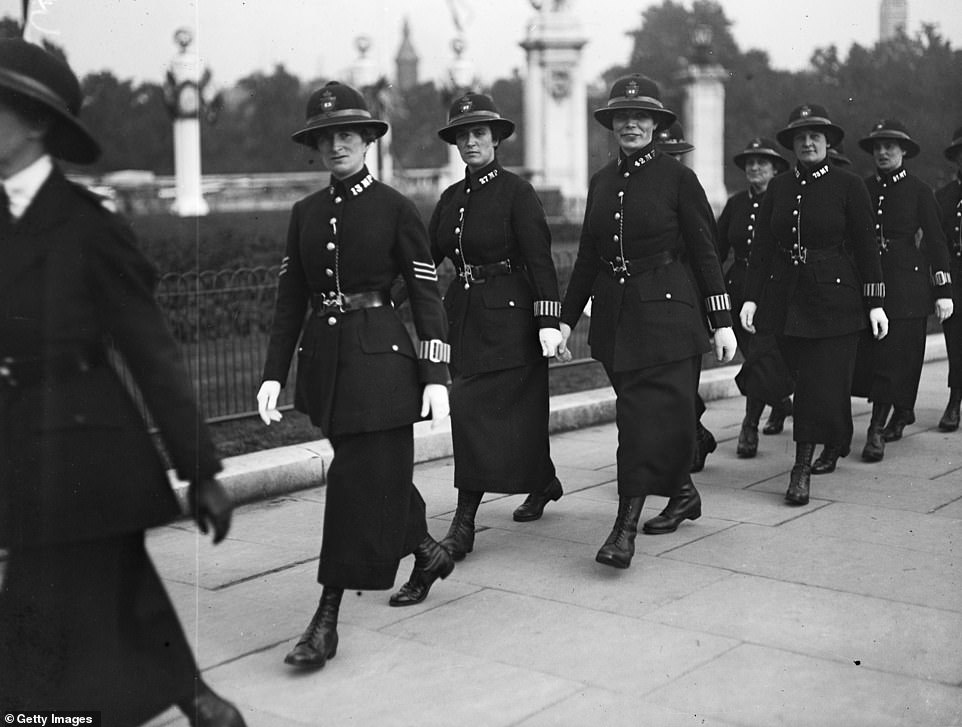 Campaigns for women to be accepted into the police force began in 1910 when Edith Tancred and Dorothy Peto began insisting on the need for female police officers. Pictured are members of the Women’s Police Force arriving at Buckingham Palace to attend a party for war workers in July 1919 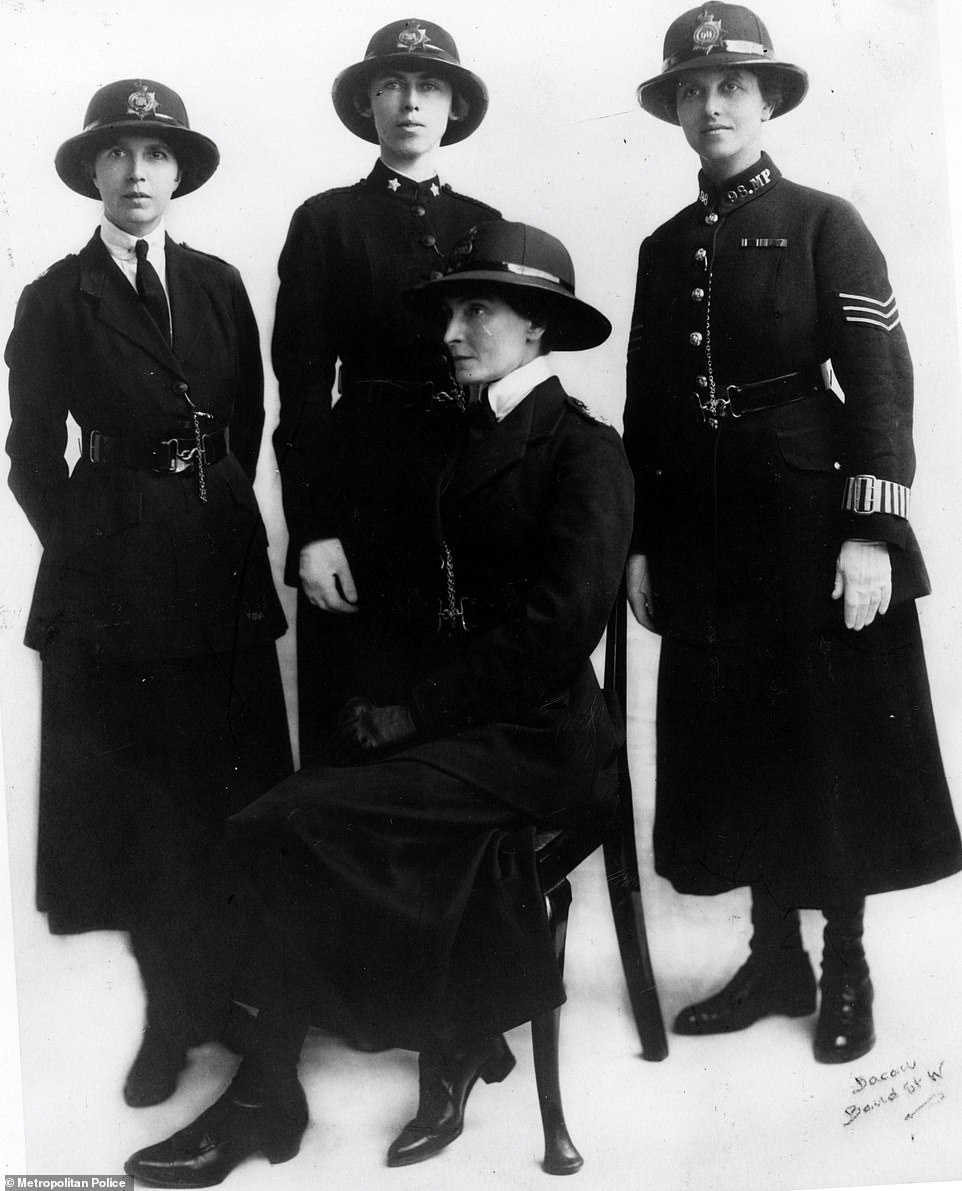 Police Officers Superintendent Sophia Stanley (seated), the first Superintendent of Women Police, and three women police officers (left to right: Elinor J Robertson, served 1919-1922, Charlotte Grace Dixon and Sergeant Violet Butcher), wearing the new Stanley Uniform, introduced in 1919. The tunic was single-breasted with six metal buttons down the front and a snake clasp belt. Black woollen stockings were worn, and boots with a one-inch heel. The helmet was made of cork and hard felt. Although Harrods fitted and made the uniform, the material was coarse and uncomfortable. In 1926 changes were made to make it more comfortable and practical 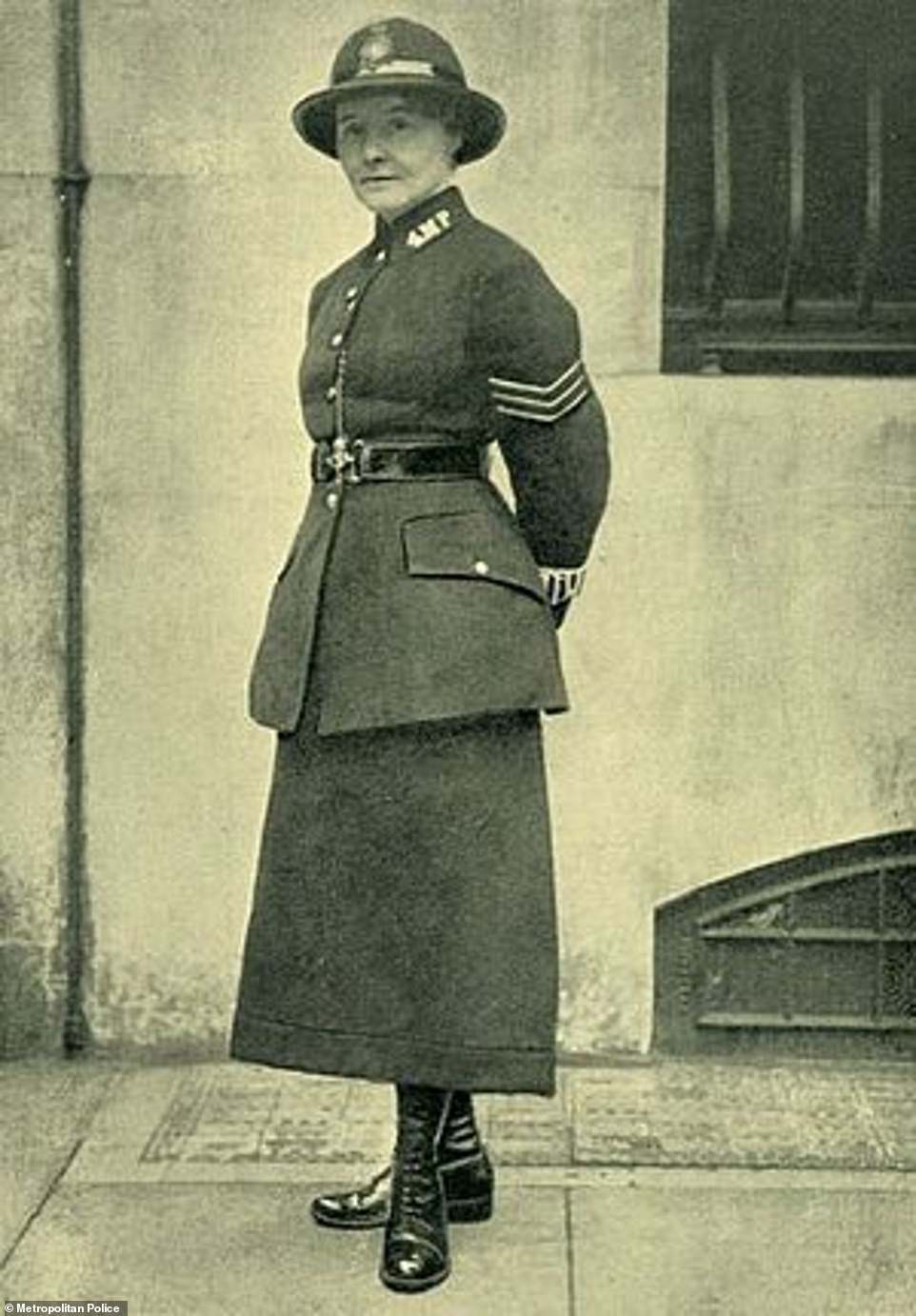 Scotland Yard’s first female Commissioner, Cressida Dick spearheaded a campaign at the end of last year to encourage more women to join the force and end male domination in senior ranks. The campaign, Strong, is its first recruitment drive targeting women, aiming to tackle the known barriers for women and challenge gender stereotypes 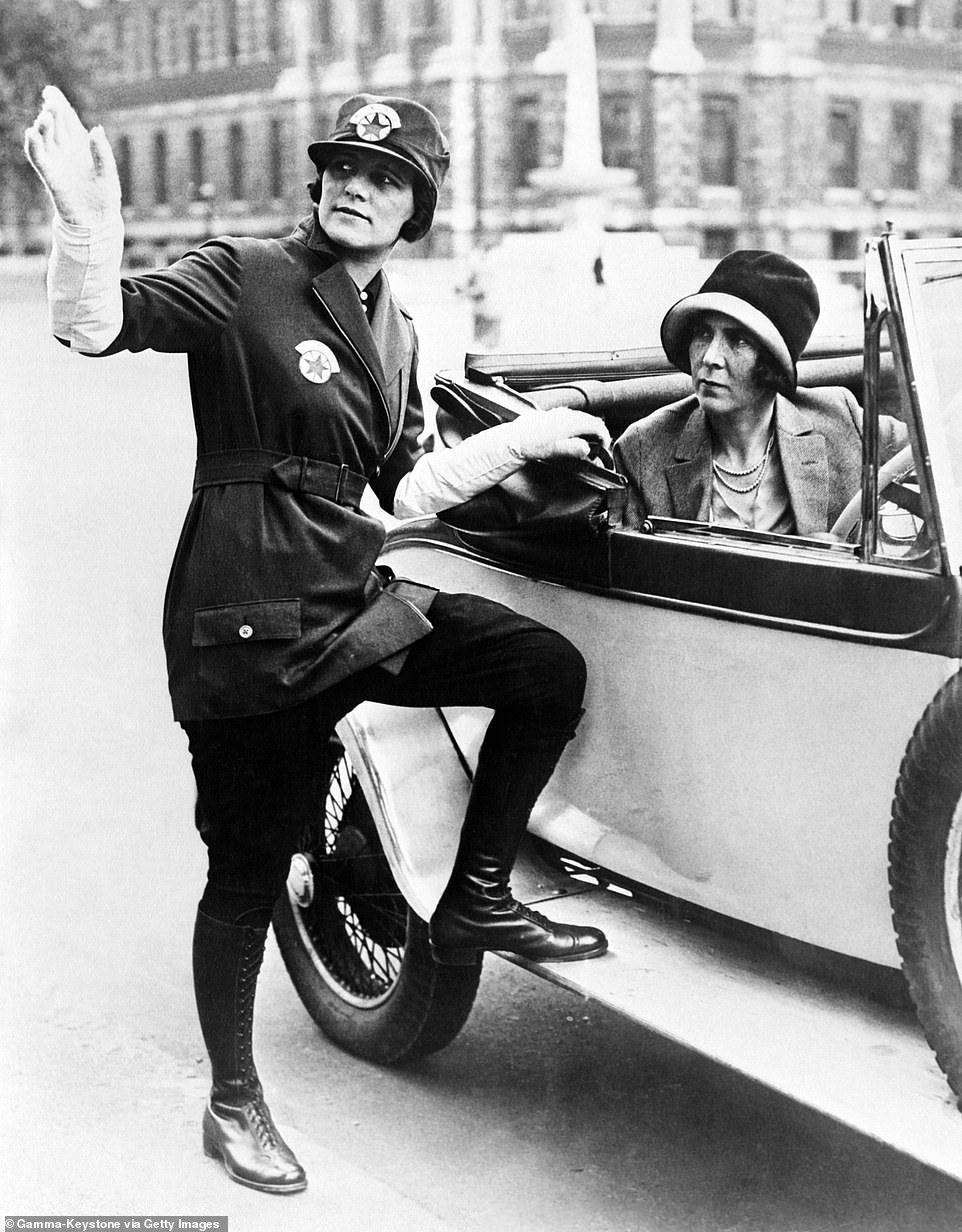 Current figures show that only 27 per cent of officers in Britain’s largest force are women but Commissioner Cressida Dick says she sees no reason why this figure can’t increase to 50 per cent. Pictured is a policewomen taking part in the first female police patrol and giving directions to a car driver in September 1929 in London 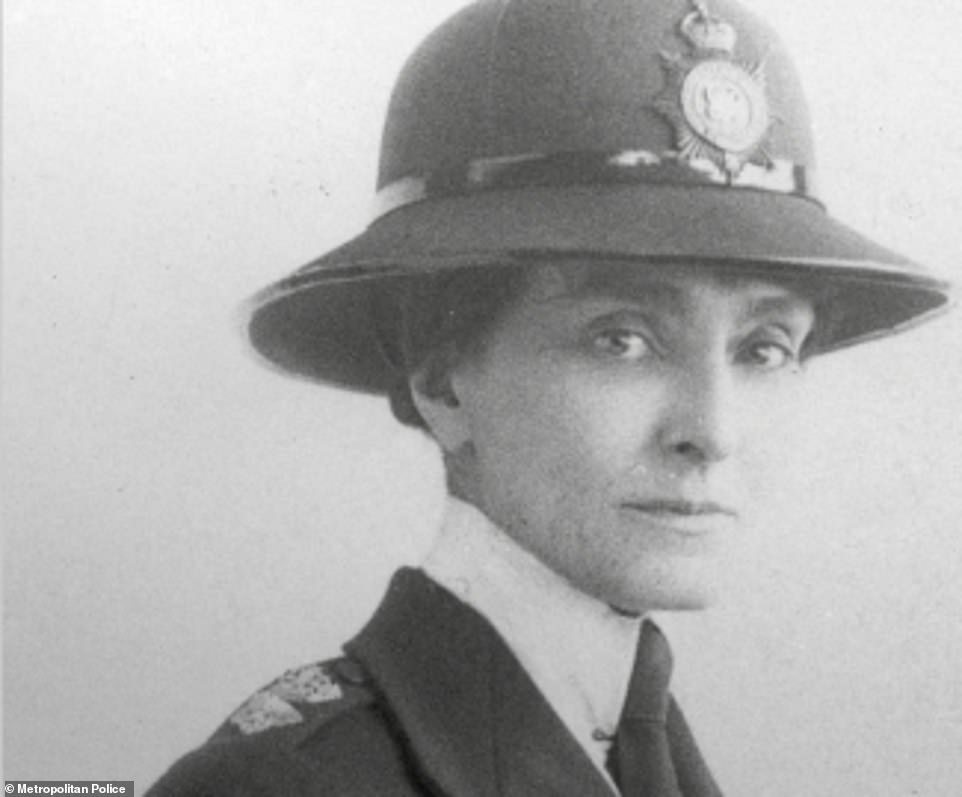 Women Police Volunteers was an organisation founded in 1914 by Nina Doyle and Margaret Damer Dawson. One of its volunteers was Edith Smith, who became the first female police officer who was given full power of arrest 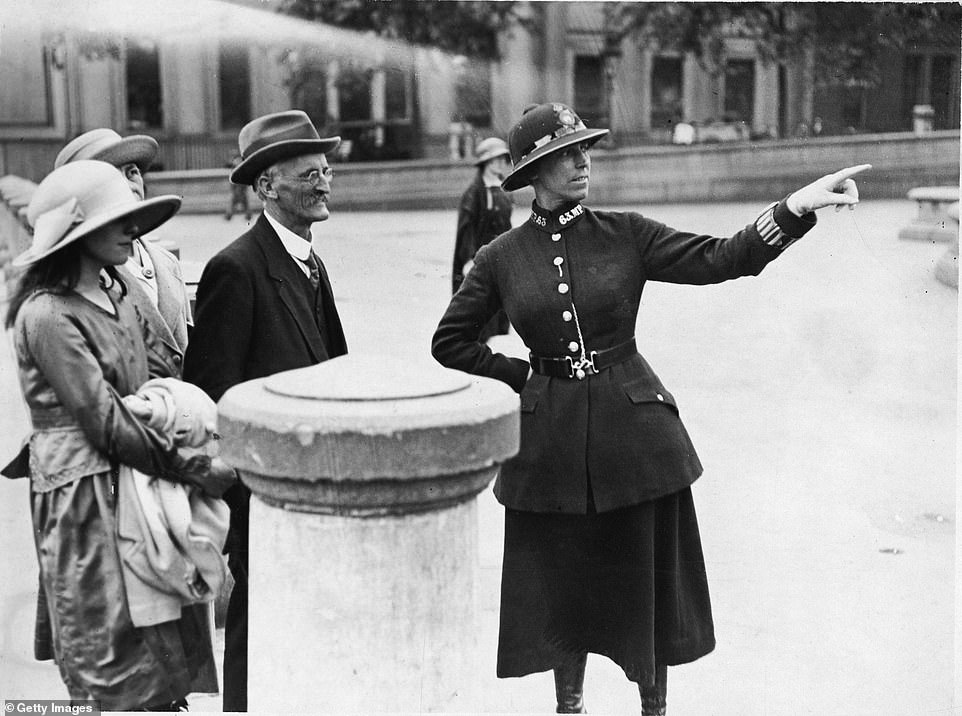 By February 1919 some 25 female officers had been hired, including the Met’s first woman in CID – Lilian Wyles. Pictured is a Met policewoman pointing while she gives directions in London to a family of visitors from out of town in the 1920s 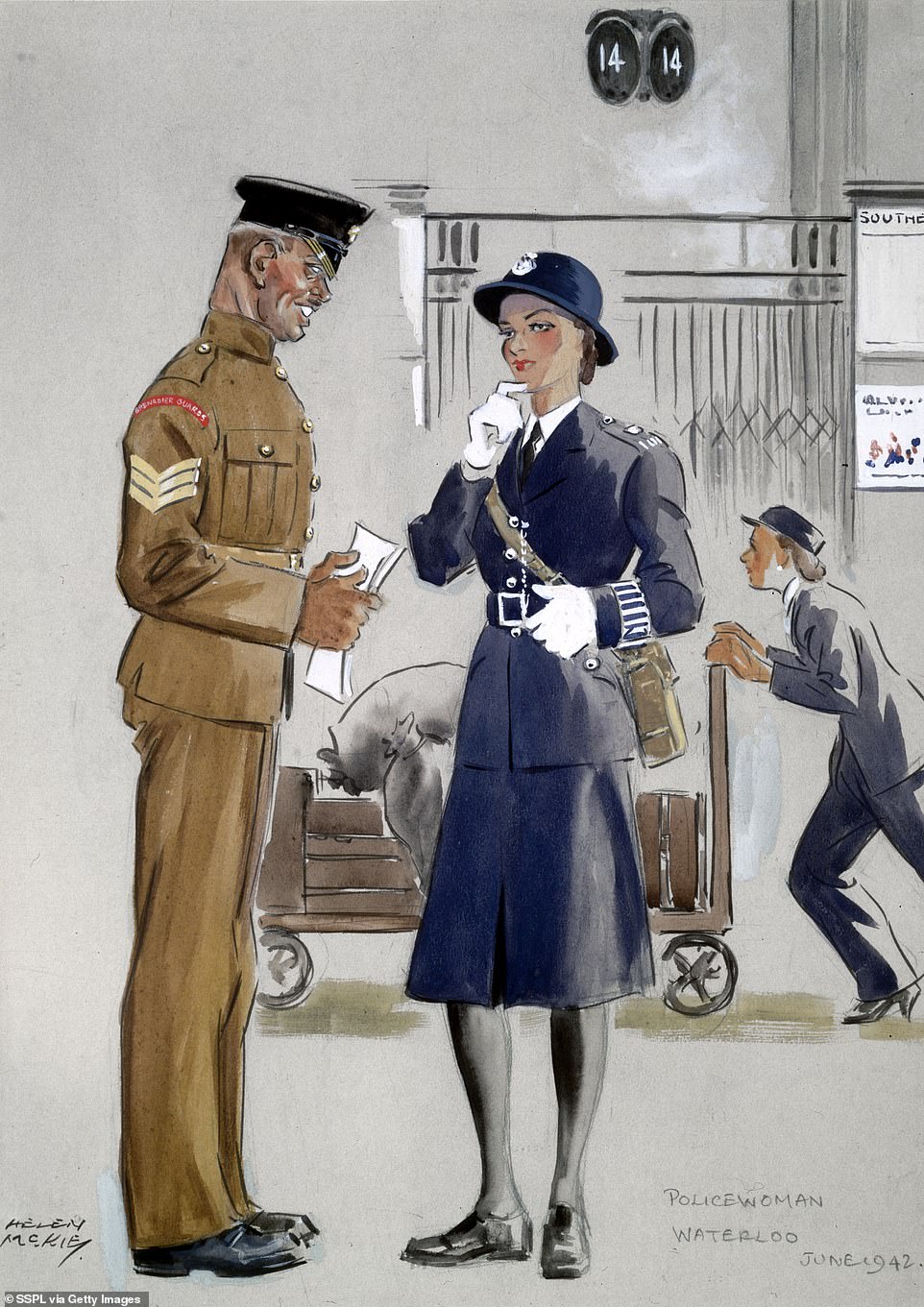 Summing up the centenary celebrations, Assistant Commissioner Helen Ball said: ‘We are bonded to the officers of 1919 and all those who have come since by our collective determination, strength and the enduring promise to serve the public. We will always strive to improve and we hope that in another 100 years those who follow us will look back with pride, as we do today.’ One of a series of watercolours of London’s Waterloo Station, during World War Two, by Helen McKie showing a policewoman talking to a Grenadier Guard in 1942 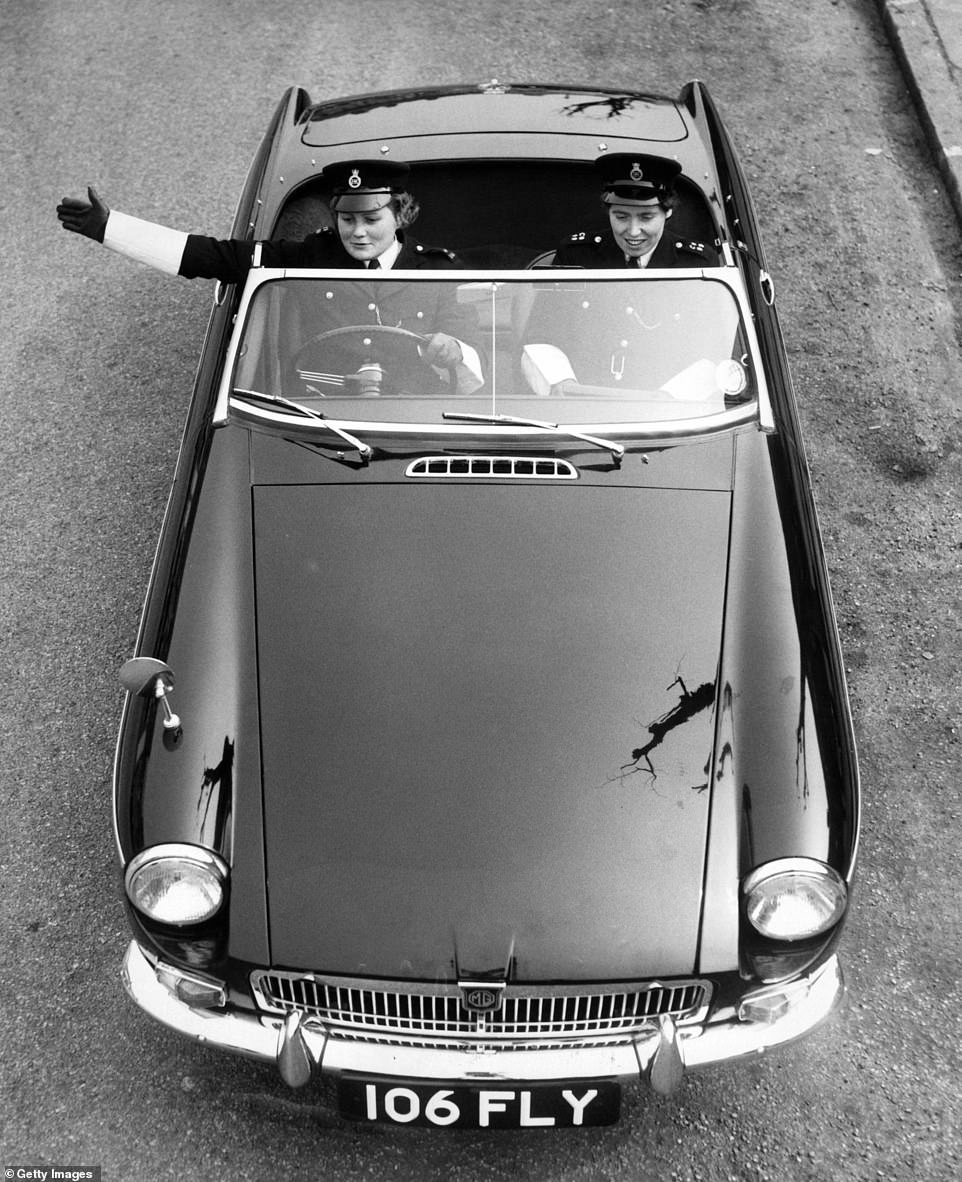 Women who had dependent young children were banned from applying for the force and the Met made it clear that no woman would ever be sworn in as a constable and that they would not get a pension. Pictured is WPC Joyce Green giving a smart hand signal while on patrol in London in the 1950s 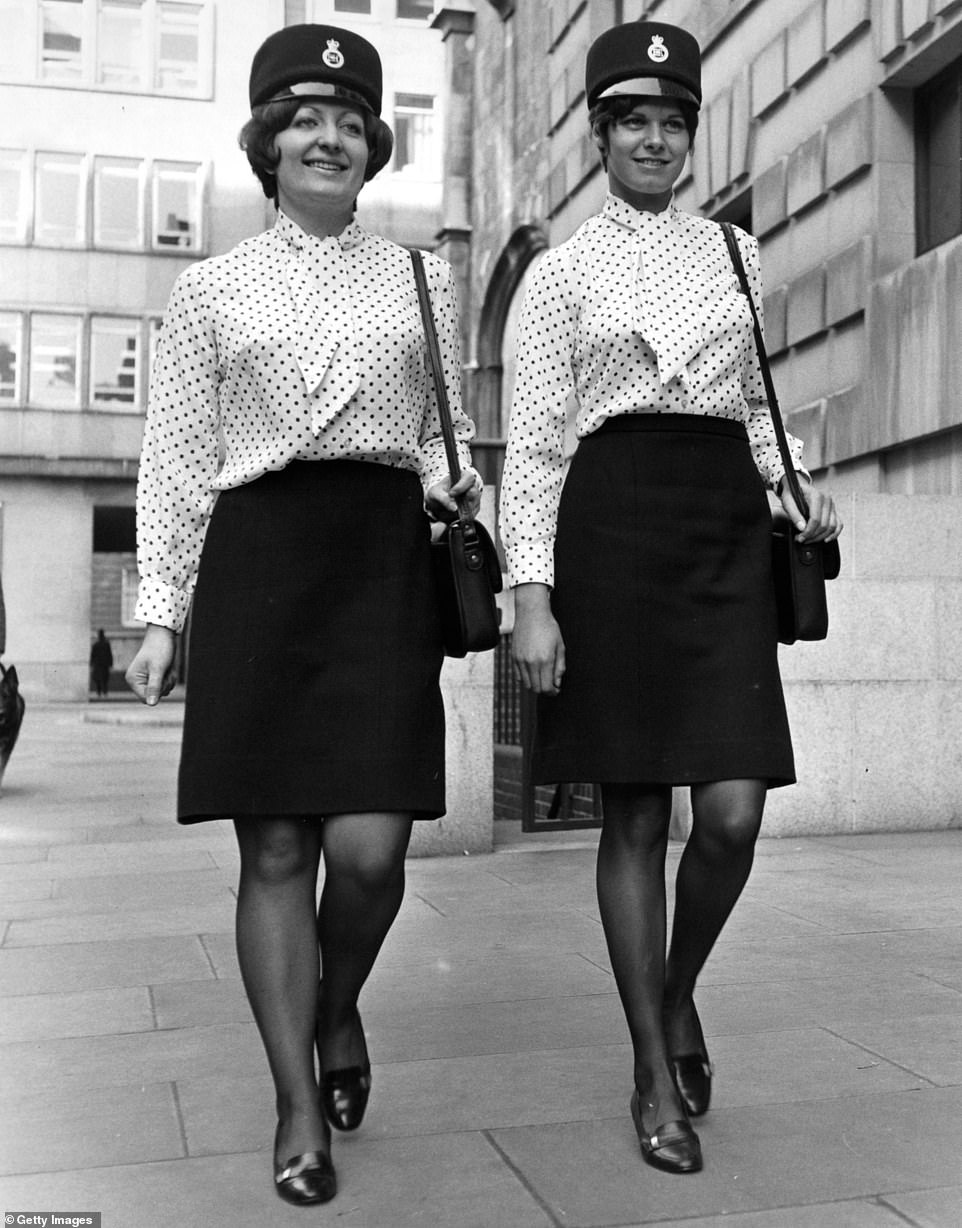 Until the 1970s, police forces segregated female officers from the men. They would have separate duties, ranks and occasionally even facilities. Pictured are Met policewomen showing off their new uniforms in 1950 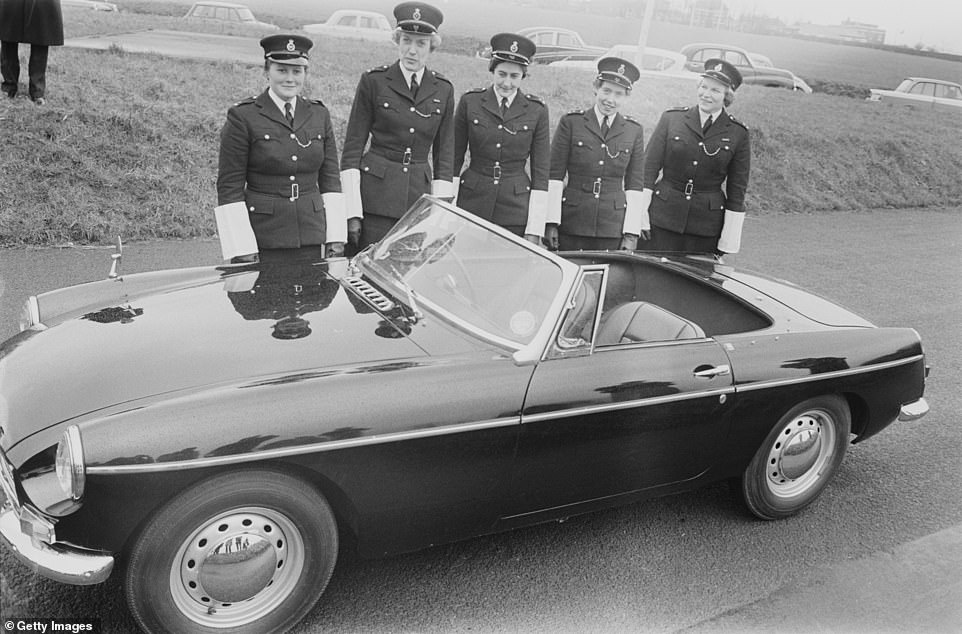 The situation changed in the 1970s with the creation of the Equal Pay Act 1970 and Sex Discrimination Act 1975. By 1973 the Met had integrated all of its female police officers. Pictured is London’s first squad of mobile policewomen posed together in uniform behind a British Motor Corporation MGB sports car at a Metropolitan Police press launch event in the capital on April 6, 1963 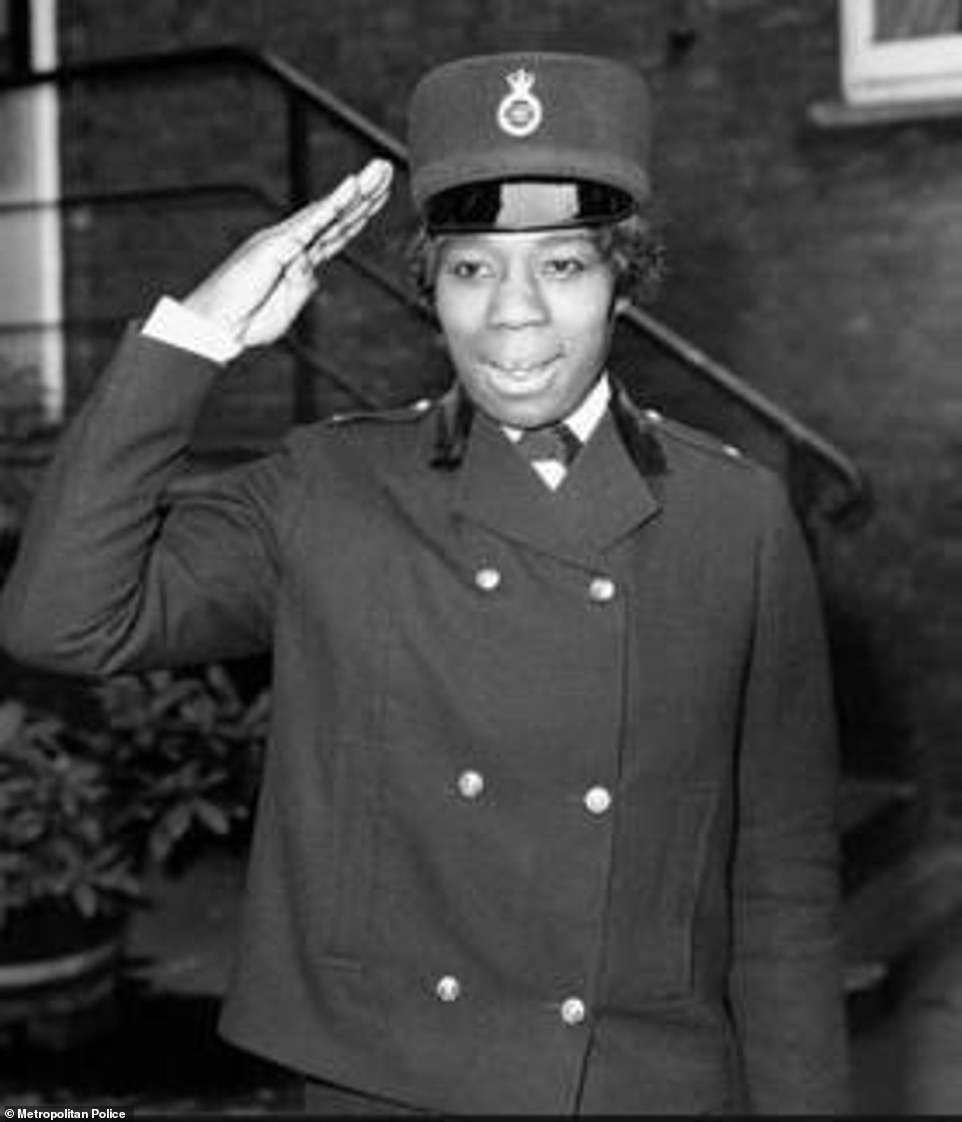 Fay Allen was the first non-white policewoman in the Met and served from 1968 to 1972. She was born in Jamaica and qualified as a nurse in Croydon before applying to work as a policewoman. She is reported to have said: ‘On the day I joined I nearly broke a leg trying to run away from reporters. I realised then that I was a history maker. But I didn’t set out to make history, I just wanted a change of direction’ 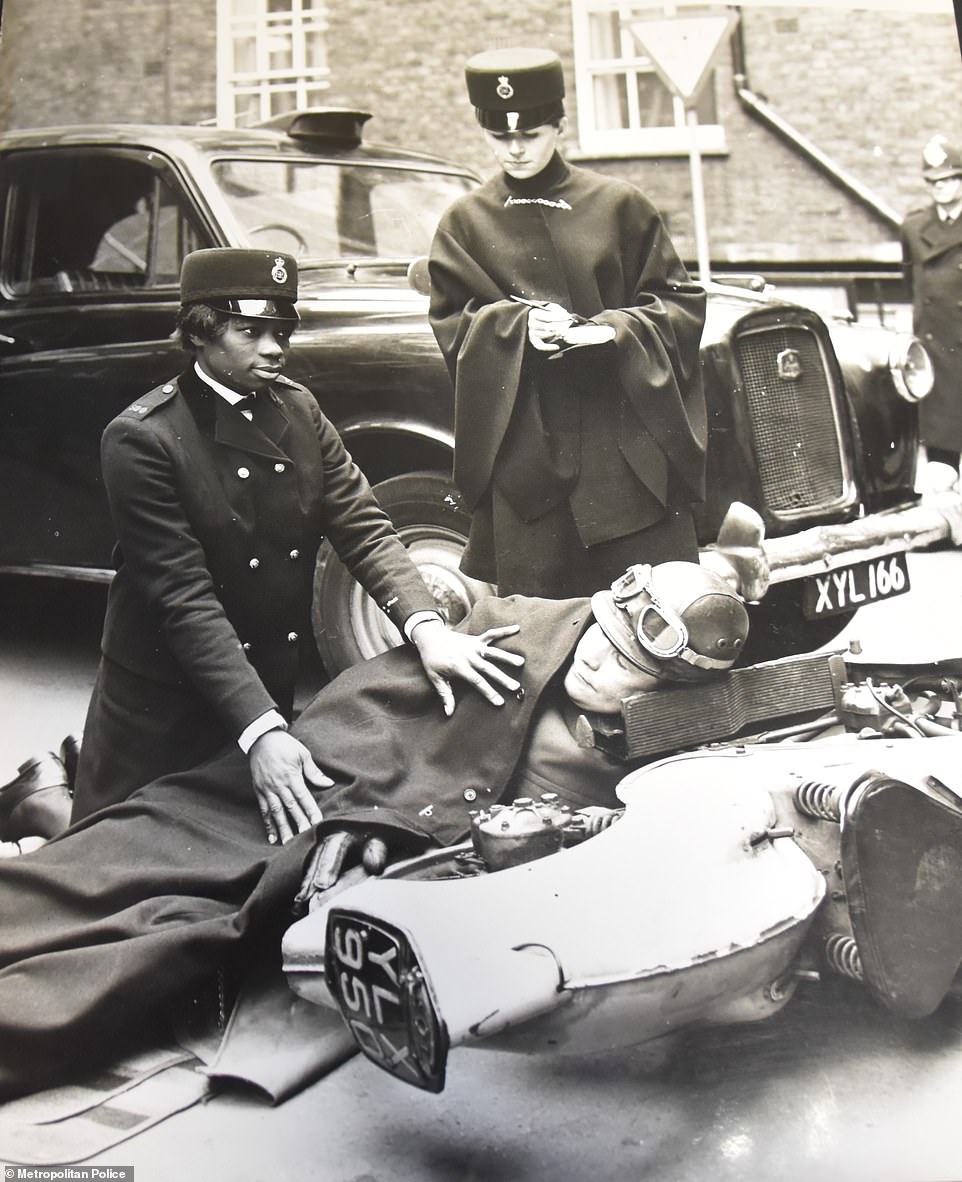 Ms Allen treating a recruit who was injured during treatment. She left the force in 1972 to move back to Jamaica where she joined the police force there until she moved back to England in 2015 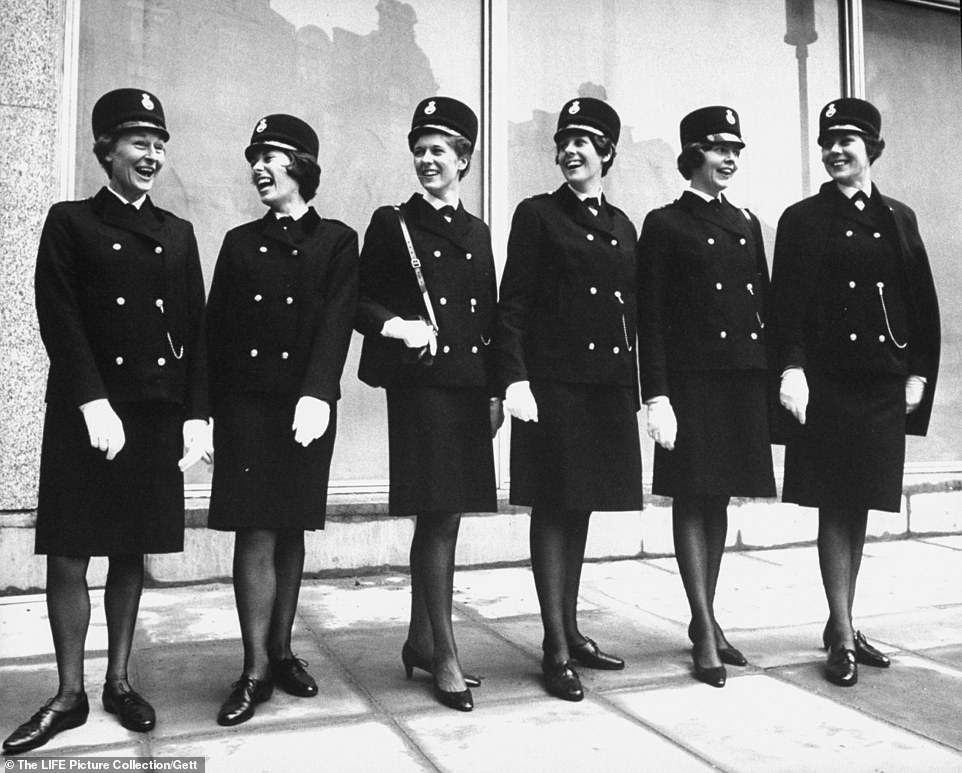 Ms Peto joined the National Union of Women Workers in 1914 and organised voluntary female patrols. She became the first female Superintendent at the Metropolitan Police and served between 1930 and 1946. Pictured are policewomen in London posing in their new uniforms in 1967 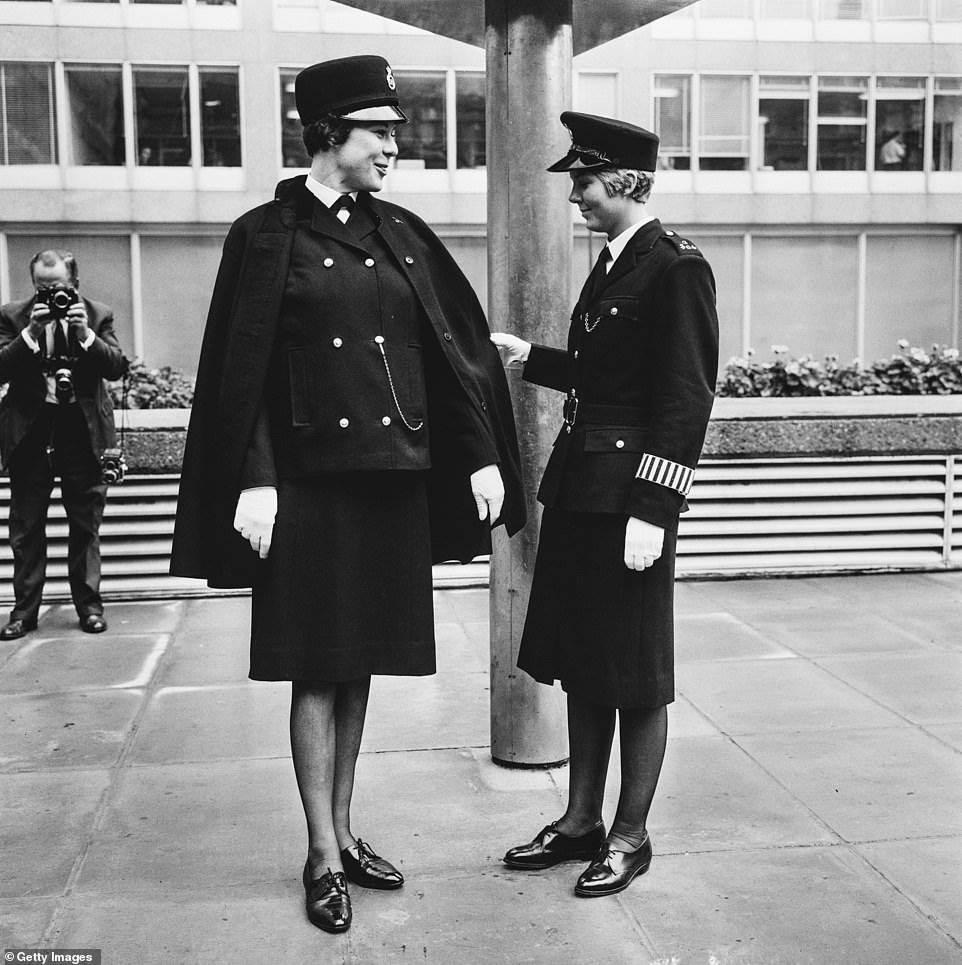 There are currently 8,000 women in the Metropolitan Police, compared with a whopping 22,000 men. The Met’s aim is to have an even ratio. Pictured are WPCs Dilys Puddephatt and Marie Leemans in 1967 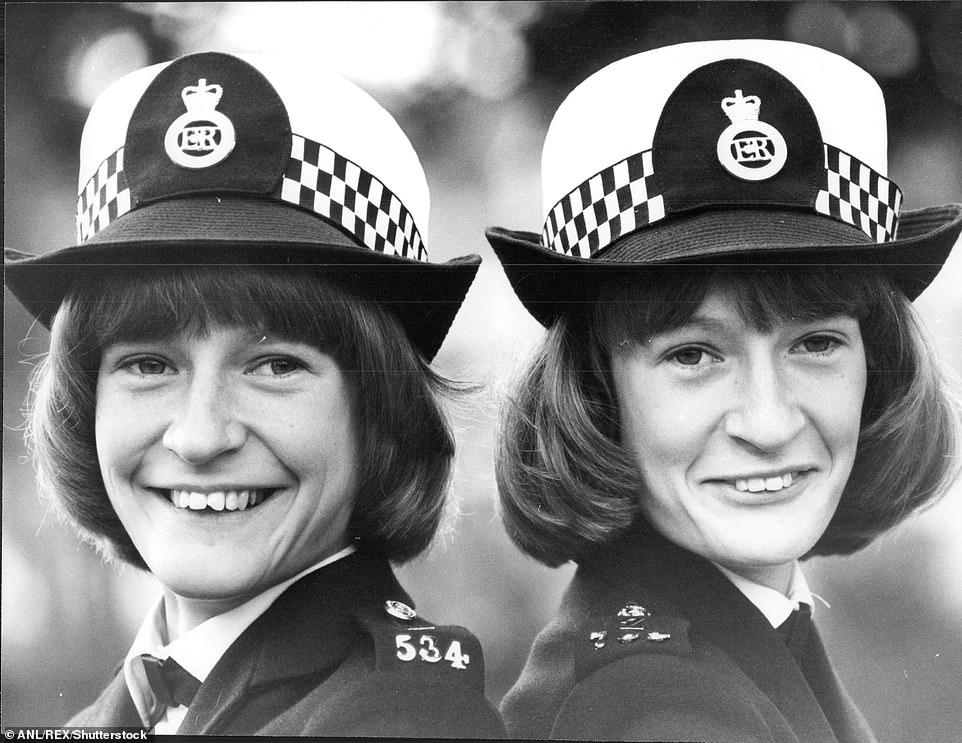 After the First World War Britain was plunged into economic dire straits and needed to make public expenditure cuts. Because the Commissioner didn’t view duties being done by female police officers as ‘proper work’, they were the first to go. Pictured are twin WPCs Susan and Sally Potts in Croydon, 1977 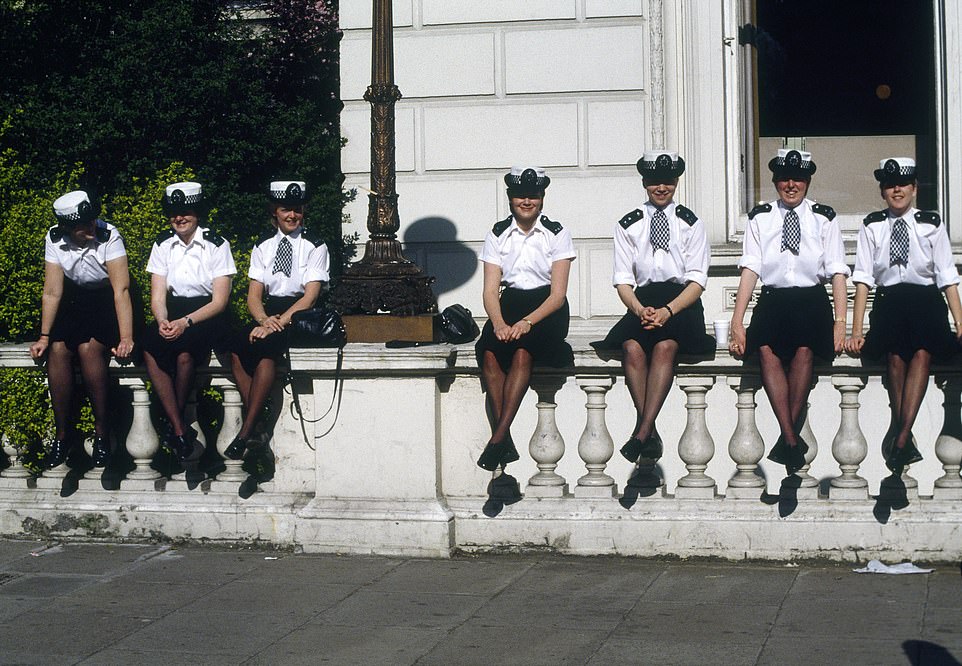 However, by 1923, some 50 female officers were re-sworn, this time with full powers of arrest. By the time the Second World War started in 1939 over 100 policewomen had been sworn in. Pictured are Met policewomen during a break in duties near the Libyan Embassy in St James’s Square during the 11-day seige after WPC Yvonne Fletcher was fatally shot while on duty during a protest demo against Colonel Gadaffi in 1984 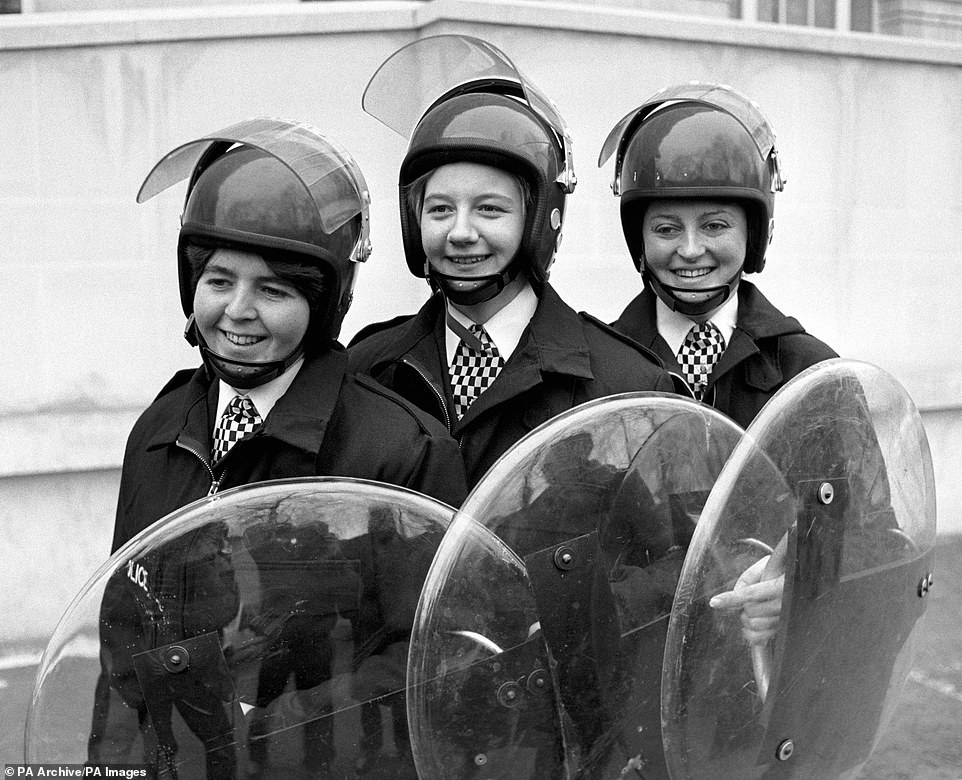 Compared with other large cities in the UK, London had far more female police officers than most, with 14 in Glasgow, 13 in Birmingham and six in Manchester. Pictured are three Met policewomen who received public order training in February 1986. Left to right: Fiona Roberts, 26, Jan Rodgers, 25 and Tracy Wilcock, 25 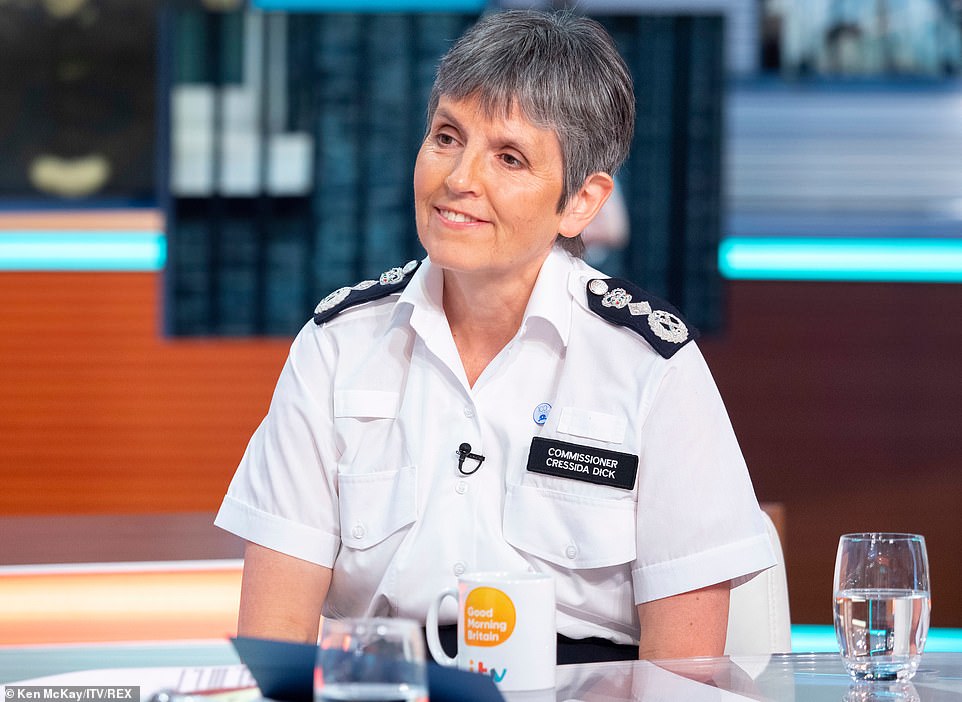 Scotland Yard’s first female Commissioner, Cressida Dick, said of today’s service: ‘I am delighted that Westminster Abbey will once again host a unique service and welcome on this occasion not just a handful, but thousands of Met police women, who will represent even more of their colleagues. As one of London’s foremost iconic, and historic locations, the Abbey is a most fitting setting for us to pay tribute to those brave pioneers from the past and reflect upon their achievements as well as highlight those of our present workforce – 8,000 women from a huge diversity of backgrounds doing influential and important roles at every rank and in every department’ 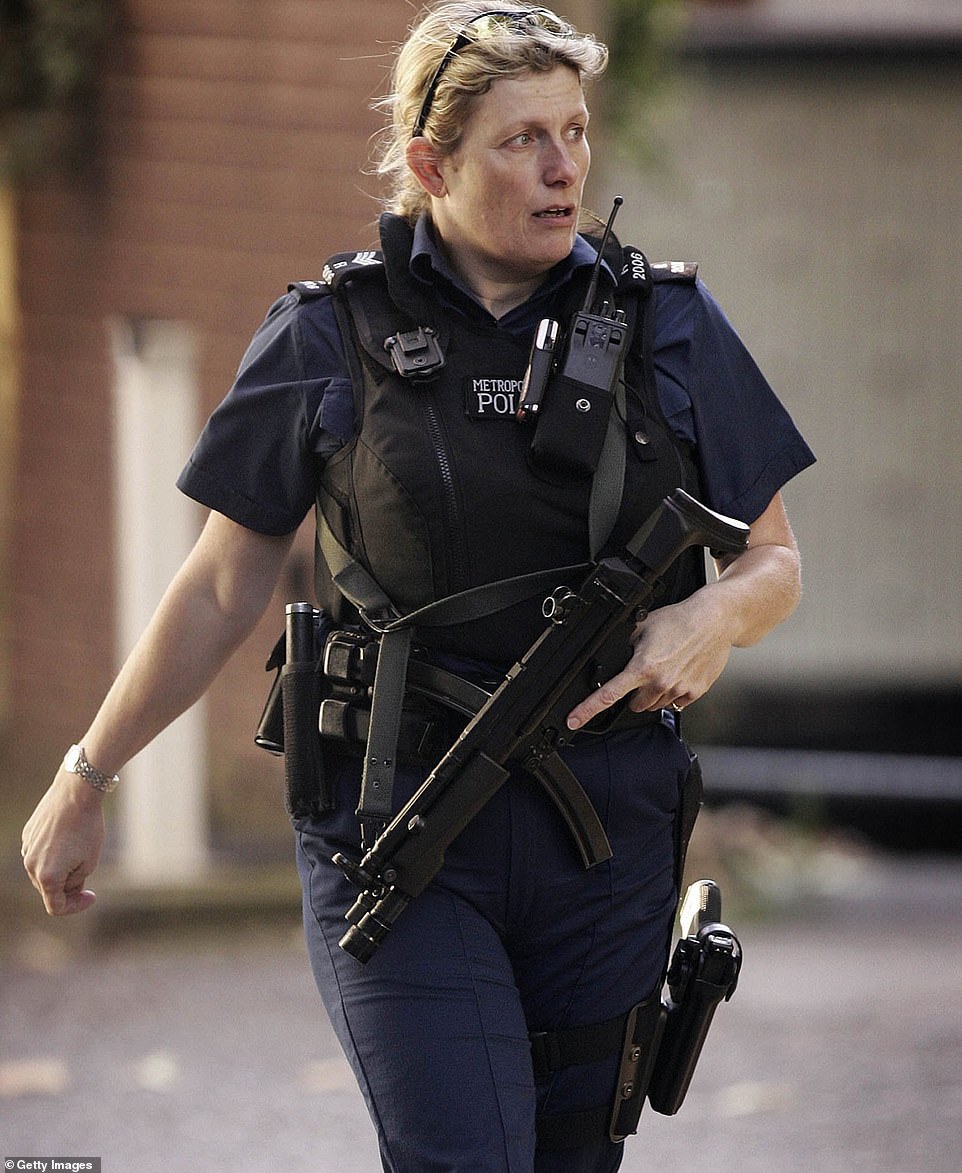 Ms Dick added: ‘We will share with our guests today, an atmosphere of excitement and pride and we will look to the future with hope that many more will join us to write the next chapter of the Met’s remarkable history’. Pictured is an armed policewoman patrolling while Tony Blair opened the Fashion Retail Academy in London in October 2006 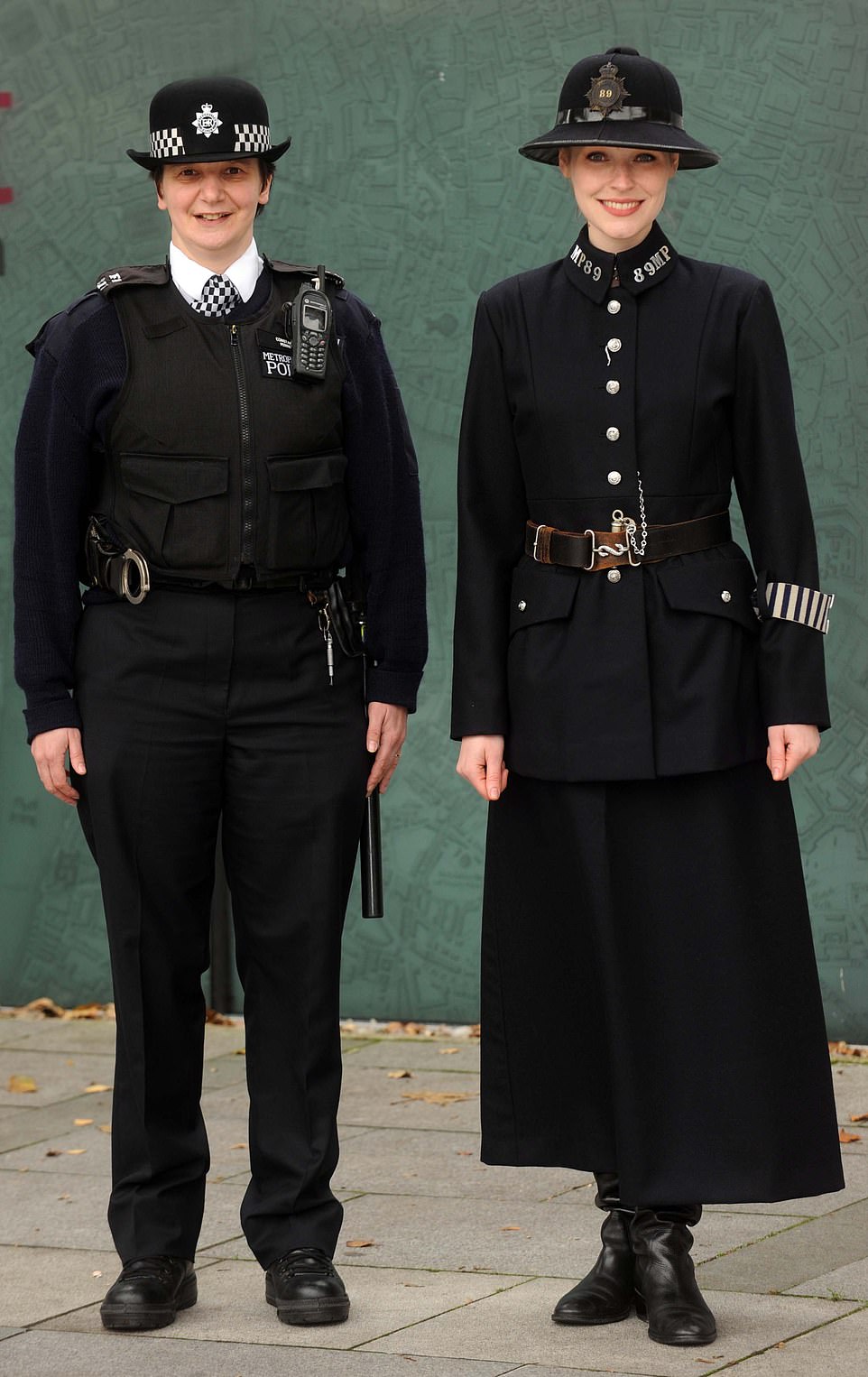 Metropolitan Police boss Cressida Dick has paid tribute to the first women police officers in the force but acknowledges they still have a ‘long way to go’ to achieve gender equality.

Current figures show that only 27% of officers in Britain’s largest force are women.

The commissioner became the first woman to hold the most senior post in British policing in 2017.

On how the profession has changed for women, Ms Dick said: ‘It’s changed hugely, I’ve been a police officer since 1983 and there are so many more women.’

‘In the last 15 years, every single role has genuinely been open to women. Specialisms, ranks, we’ve got women doing anything and everything.

‘When I joined, it tended to be one on this team, one on that team, and certain things weren’t open to women at all. 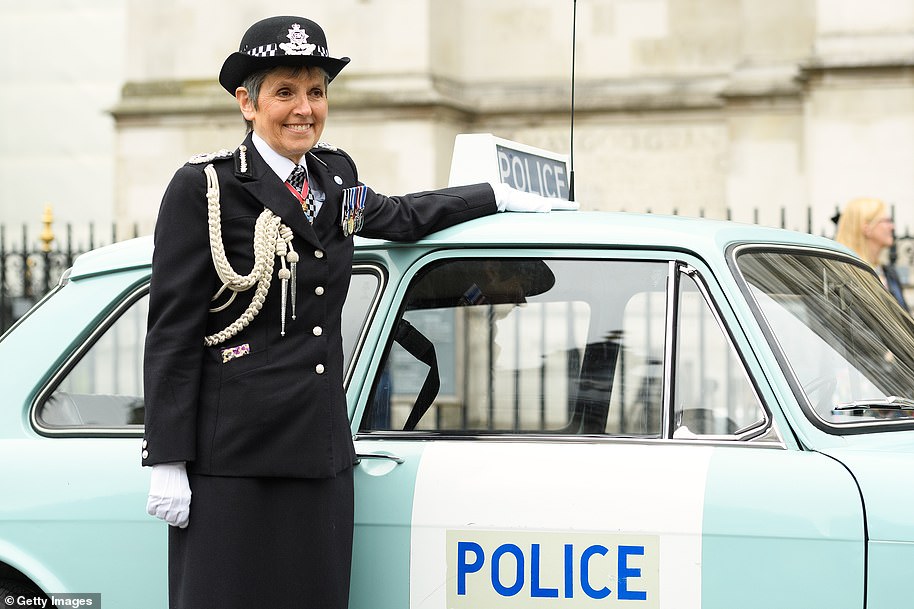 Scotland Yard’s first female Commissioner, Cressida Dick, paid tribute to the first women police officers in the force but acknowledges they still have a ‘long way to go’ to achieve gender equality

‘I loved it then and I love it now but it is utterly different.’

Asked about if she considers herself a role model, Ms Dick said: ‘If people do look at somebody like me and think, “well, if she can do it, I can do it, I feel a bit different and she looks a bit different, so I might have a go” – that’s brilliant, that’s great.’

Ms Dick spearheaded a campaign at the end of last year to encourage more women to join the force and end male domination in senior ranks.

The campaign, Strong, is its first recruitment drive targeting women, aiming to tackle the known barriers for women and challenge gender stereotypes.

‘Already about a third of the Met is women but I think it could be much more and in particular amongst police officers, it’s only 27 per cent at the moment. I don’t understand why, in the future, it wouldn’t be 50 per cent,’ she said.

‘We’ve got a long way to go, we’re working really hard to inspire women to join us in a variety of different ways.

‘But also to make the workplace an even better place for men and women to be.’ 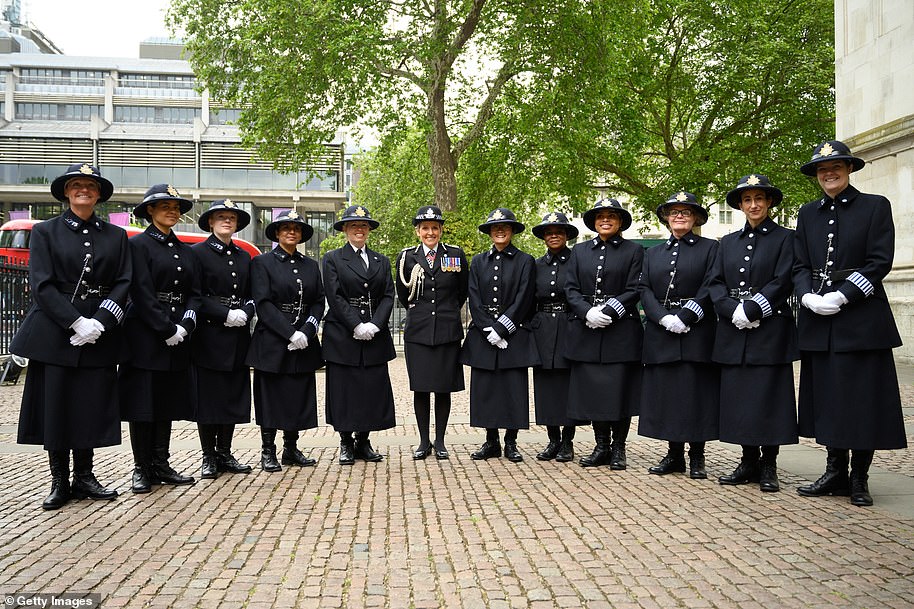 She said, ‘We’ve got a long way to go, we’re working really hard to inspire women to join us in a variety of different ways,’ during a thanksgiving ceremony today to commemorate 100 years of women in the Metropolitan Police