They have been enjoying a romantic holiday in Mykonos.

And Delilah Hamlin and Eyal Booker were out for another day of sun, sea and fun as they chartered a boat for a trip with friends around the Greek island on Wednesday.

Delilah, 23, showed off her model figure in a skimpy white bikini embellished with dainty gems that complemented her tanned and toned physique.

Not content with just one bikini, the daughter of Real Housewives Of Beverly Hills star Lisa Rinna and LA Law actor Harry Hamlin later changed into a white bandeau two-piece with tie-side briefs.

Her Love Island star partner Eyal, 25, also looked fantastic as he paraded his ripped physique while going shirtless in a pair of swimming trunks.

The couple seemed in great spirits as they chatted away with their group of pals while enjoying the picturesque views out on the high seas.

Hello buoys: Delilah, 23, showed off her model figure in a skimpy white bikini embellished with dainty gems that complemented her tanned and toned physique

The couple jetted to Mykonos from the UK and divide their time between Britain and New York, where they spent much of the quarantine together.

In May, Eyal told New York City-based fashion magazine Paper last month: ‘COVID was going to either make or break mine and Delilah’s relationship.

‘And we weren’t always sure if we would be able to see each other and spend time with each other but somehow we managed to get through it, make it work and come out even stronger.’

Working her angles: Delilah was a vision of beauty as she showed off her incredible figure in the skimpy two-piece 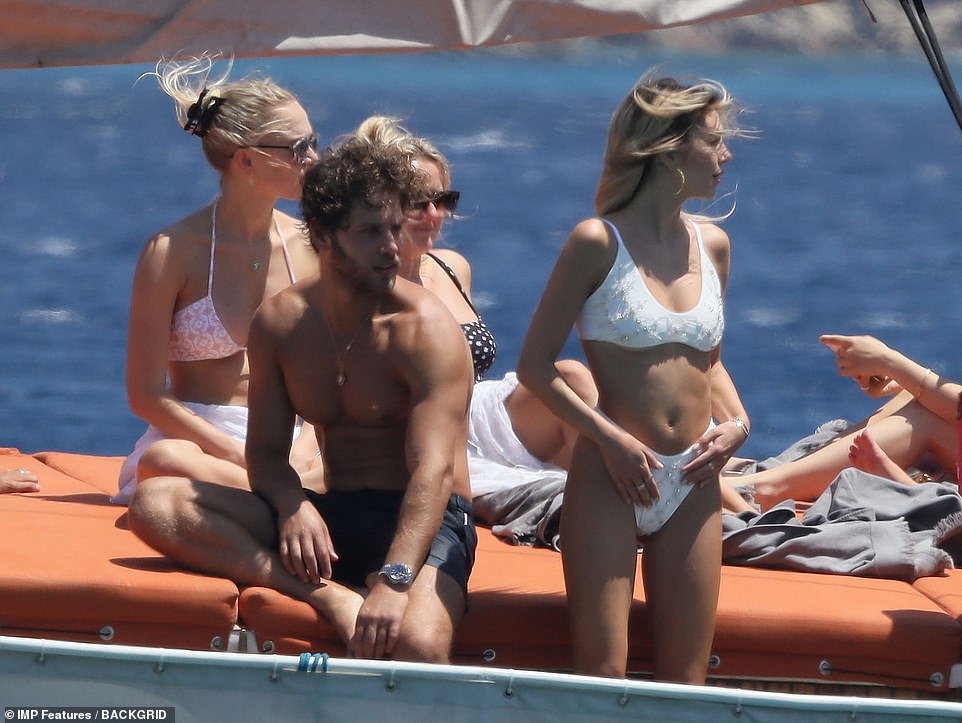 Cute couple: Eyal and Delilah spent some quality time together as they looked out over the ocean while chatting with pals

He continued: ‘COVID is not over yet, but we’ve made it this far and that’s pretty special to me considering at the beginning we weren’t sure how we would navigate through it.’

They first met after Delilah saw him on Love Island in 2018 and slid into his DMs.

Their conversation continued to grow and he eventually hopped on a flight to join her at Coachella in 2019. 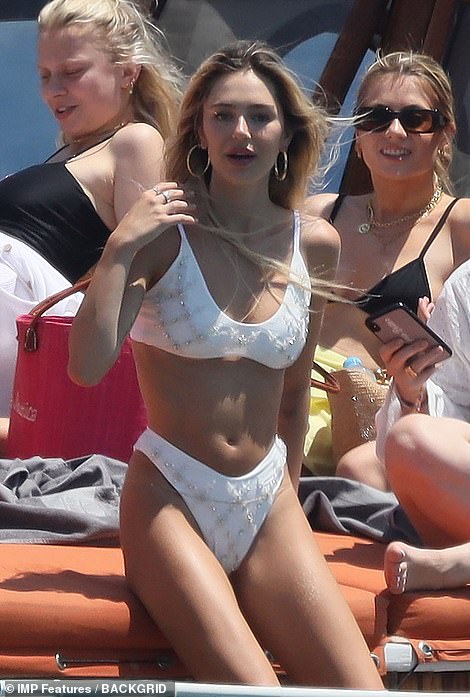 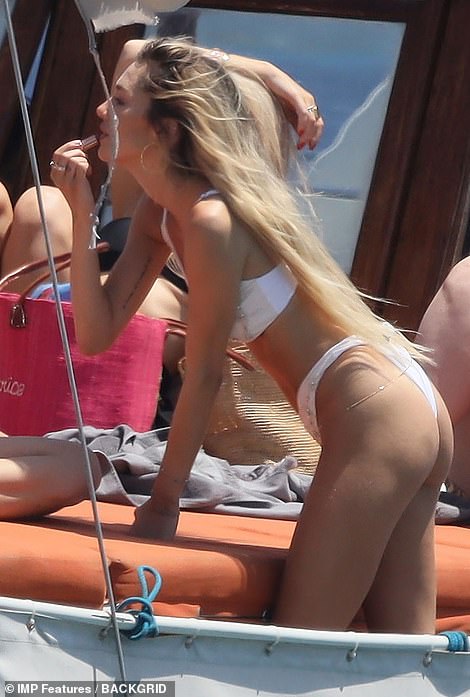 Beauty queen: Ever the glamour puss, Delilah was seen applying her makeup while out on the high seas 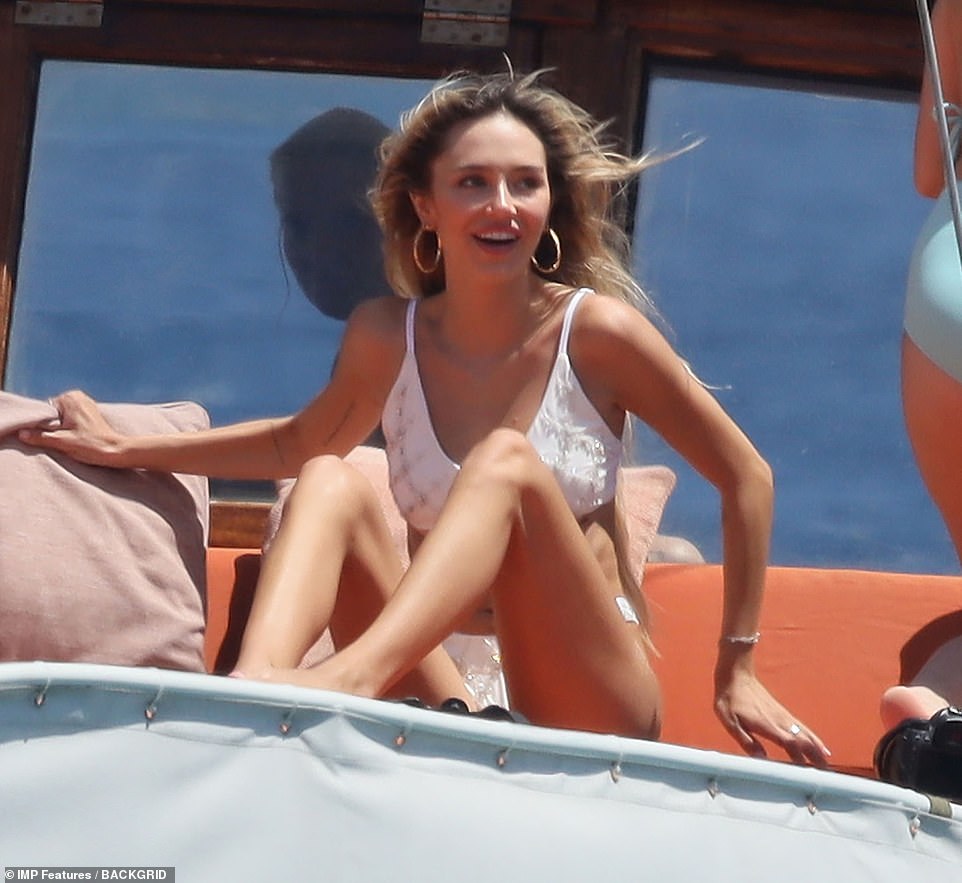 Sitting pretty: Delilah was laughing away with her pals while out enjoying the sunshine on the yacht trip

Topping up her tan: Delilah stepped out onto the boat’s bow as she tilted her face up to catch some rays 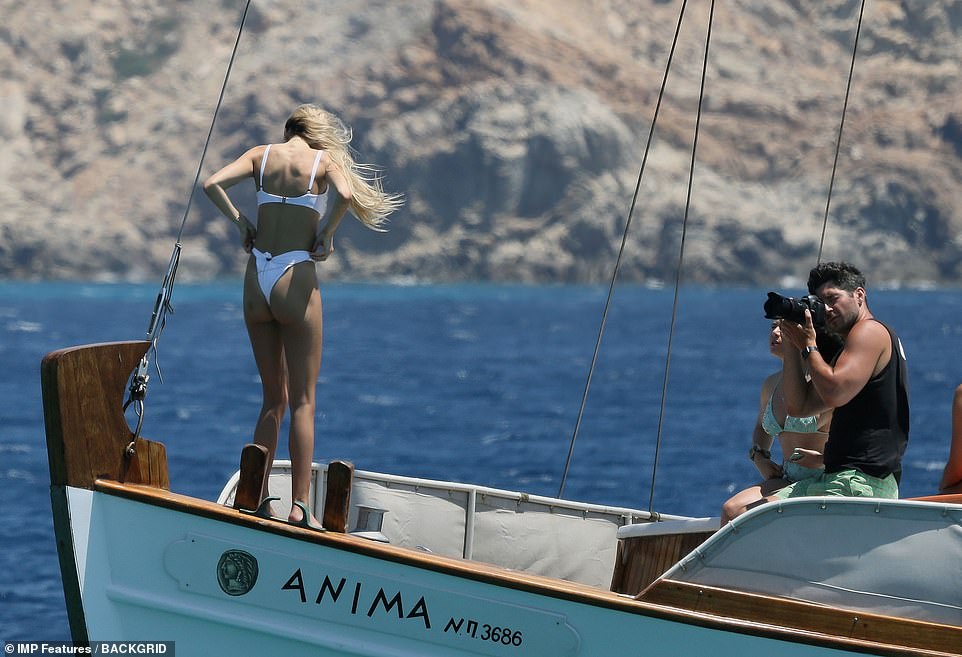 The couple declared their love for one another after just six months of dating and juggled a long-distance relationship at first before becoming inseparable.

Last year, Eyal revealed his plans to move in with Real Housewives Of Beverly Hills star Lisa Rinna, as his relationship with her daughter Delilah heated up.

He told The Sun: ‘We are currently doing a long distance relationship but the longest we have gone without seeing each other for the last few months is just two weeks.

‘We know that’s not sustainable forever though, so I think in the New Year we will have to work out what we are going to do permanently moving forward. I am more than happy to move to LA… it feels like I’ve found the one.’

Hunk in trunks: Love Island star Eyal, 25, also looked fantastic as he paraded his ripped physique while going shirtless in a pair of swimming trunks 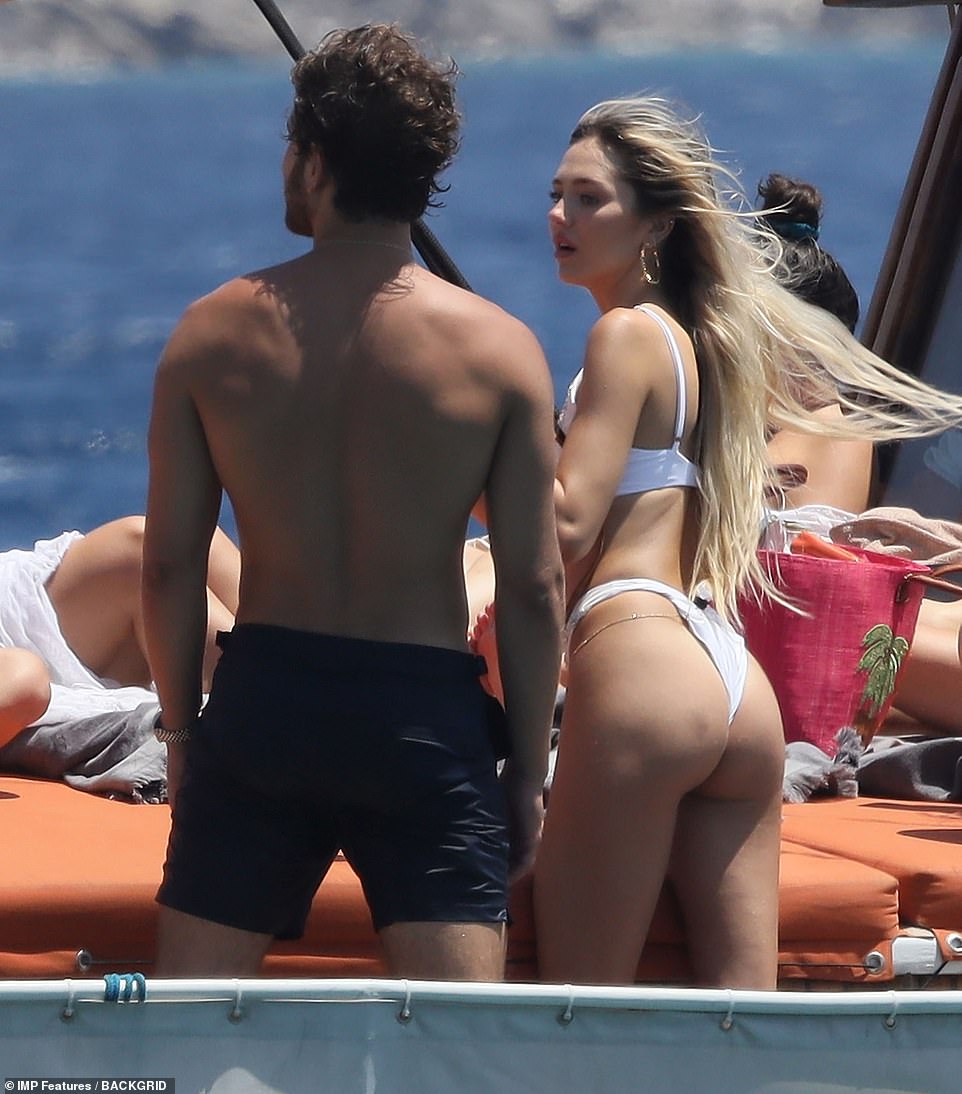 Delightful duo: Eyal and Delilah looked cosy as they chatted away to one another on their boat trip 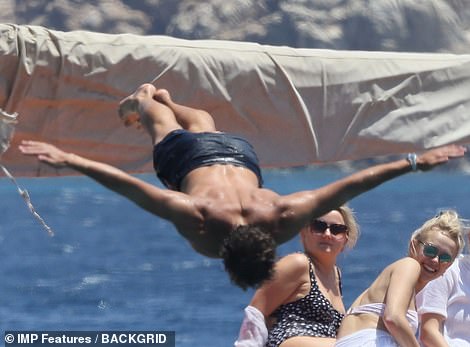 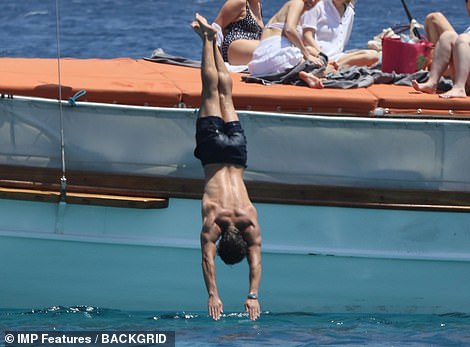 Off he goes: Eyal showed off his impressive diving skills as he launched himself off the side of the boat into the sea

The couple lived in the States as the Covid pandemic kicked off before moving to the UK earlier this year.

In January, Eyal was pictured looking enraged on an outing with his girlfriend, but the couple later took to Instagram to claim all was not as it seemed.

Sharing a video of the pair in bed together, Eyal told his followers: ‘We were cleaning out the car…’

‘And I literally smacked my hand on the car which made me pull that face because it hurt for a couple of minutes. We weren’t arguing and nothing crazy is going on in our relationship. We’ve very happy.’

Delilah added: ‘We have never argued before. We talk things through.’

‘Not like that,’ clarified Eyal. ‘It’s not in my nature to be screaming. We’re very happy.’

On Valentine’s Day of this year he reminisced on how they met, penning: ‘I’m so grateful that slid into my DMs and since that day I’ve never stopped loving or thinking about you. You’re my person. I love you.’ 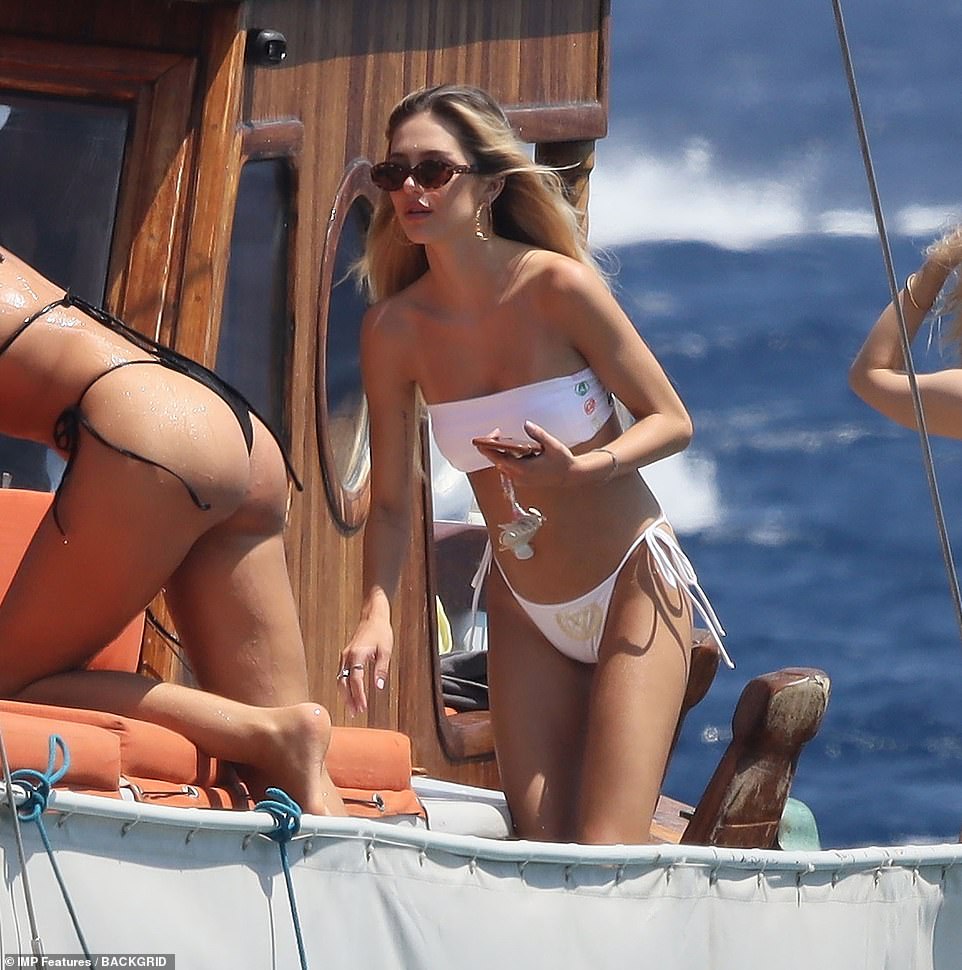