A delivery driver smacked a thieving fox with a hockey stick after it brazenly wandered up to his van and stole a parcel from a trolley.

The footage, believed to be filmed in London, shows two delivery workers reacting with horror as the fearless fox ventures increasingly close to them.

As the animal creeps nearer to a metal trolley holding parcels, one man says: ‘Tell him to f*** off. Why is he not scared?’ 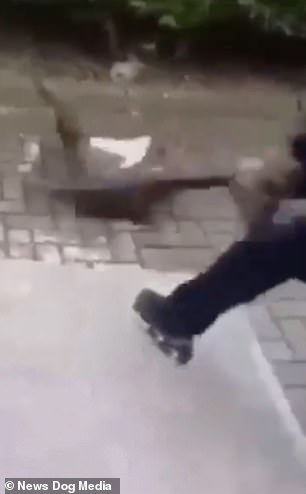 A delivery driver beat a fox with a hockey stick (right) when the daring creature stole a parcel (left) he was trying to load into his van, believed to be in London

Another voice says: ‘I’m gonna get my dog down here.’

With a burst of bravery, the fox moves right up to to the trolley and starts sniffing at a parcel that has partly fallen through the metal bars.

The man filming the clip then moves around to the side of the trolley yelling: ‘Fox, move.’ 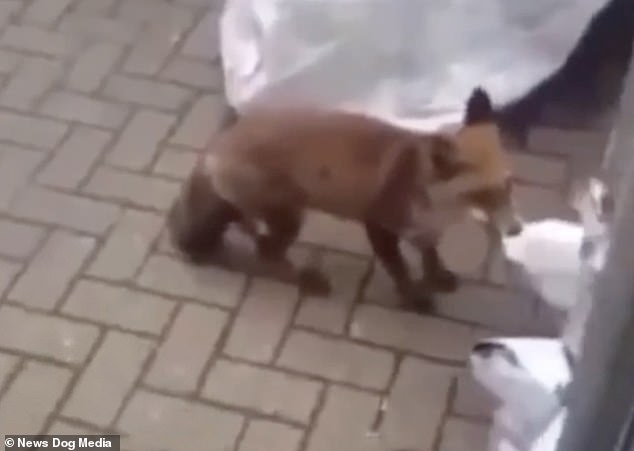 With a burst of bravery, the fox moves right up to to the trolley and starts sniffing at a parcel that has partly fallen through the metal bars 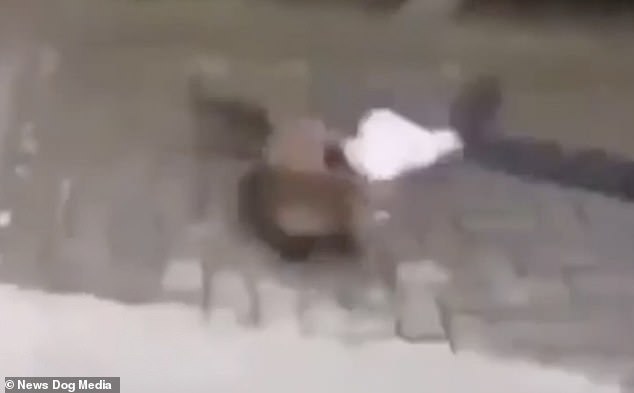 After it was hit with what appears to be a hockey stick (pictured) the animal quickly jumps onto its feet and scampers off, visibly terrified by the horrific attack

When the creature doesn’t budge he shouts: ‘Bruv this thing ain’t moving.’

The fox then quickly bites down on the bag it was sniffing and pulls it from the trolley.

It sits on the paved floor clutching onto the bag as the man says: ‘Bro he’s trying to take the parcels.’

The fox then trots off with the parcel still in its teeth before sitting down on top of it a few yards from the van. 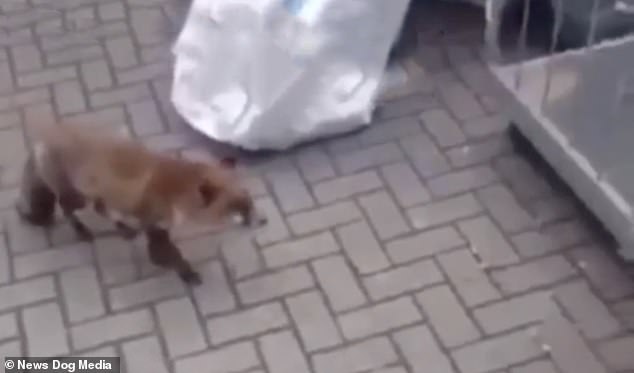 Is litter increasing the risk of fox attacks?

While fox attacks are uncommon, there is concern that litter is encouraging the population of the animals to rise.

It found Bournemouth has the highest concentration of urban foxes in the UK, with 23 per square kilometre.

The RSPCA describes fox attacks as ‘extremely rare’ but says foxes can become ‘quite bold’ if left food.

In February, seven-month-old Raeya Wyatt was left with puncture wounds on her hand and foot after being attacked by a fox at home in Plymouth.

And in London in 2010, twins Isabella and Lola Koupparis were left ‘covered in blood’ after a fox attack, in what their mother called a ‘living nightmare’.

The first man says: ‘The thing is off with your parcel.’

The driver comes out of the van to see the fox and says: ‘Is that my parcel?’

The fox turns around to look behind itself just before the driver comes into frame.

He swing what appears to be a hockey stick at the fox with such sickening force that it sends the animal rolling onto its back.

The fox quickly jumps onto its feet and scampers off on terror.

The number of foxes in towns and cities has quadrupled since the 1980s.

Researchers say there are now likely to be more foxes per square mile in urban areas than there are in the countryside.

The abundance of food in urban areas is believed to have attracted foxes to move from the countryside. 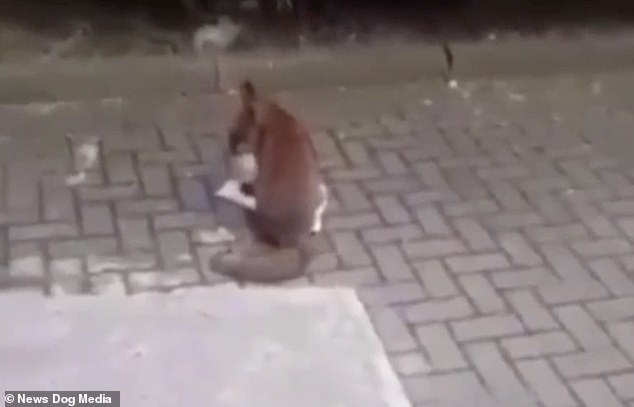 The fox sits on the paved floor clutching onto the bag as one man says: ‘Bro he’s trying to take the parcels’