Deliver-OW! Mortifying moment cycle courier crashes on live TV while ‘showing off’ behind a reporter broadcasting from Bucharest street

This is the hilarious moment a Romanian TV reporter was in the middle of a live piece to camera when a bicycle courier crashed in the background.

The reporter was completely unaware of the drama behind her and continued delivering her report from the pedestrianised street in Bucharest.

The video shows the man, carrying a large back pack, zig-zagging between two banks of tables and chairs outside bars lining the thoroughfare when he loses control and falls off his bike.

The cyclist, pictured over the shoulder of the TV reporter was riding along the pedestrianised street in Bucharest 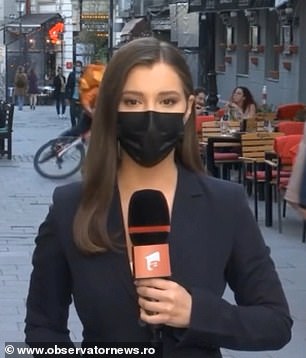 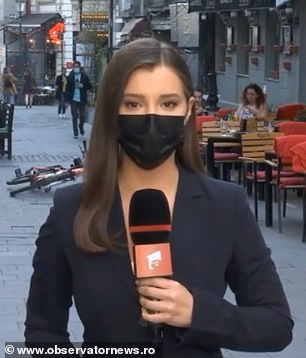 Despite the drama going on behind her, the journalist from the news channel Observator continues with her broadcast.

She was in the old part of the city talking about the restrictions Romanians had to abide by over the Orthodox Easter celebrations.

The incident happened on the afternoon of April 30, the day before one of the most significant ceremonies of the year in the Orthodox church.

The cyclist remounted his bike and continued with his journey raising a hand and giving a ‘thumb’s up’ to the camera crew as he passed.

Several viewers criticised the cyclist, suggesting that he spotted the TV crew and began showing off which led to his loss of control.

Others said he should not have been riding on a pedestrianised street with many suggesting he deserved what happened to him.

Another commentator asked why the people sitting at the tables did not stand up to provide any assistance to the cyclist. 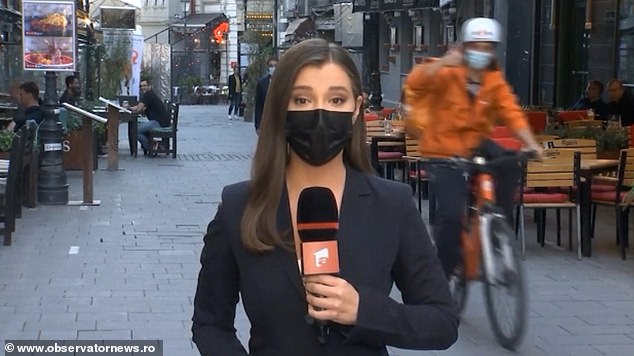