By Lauren Edmonds and Matthew Wright For Dailymail.com

A Delta Air Lines flight from Detroit to Atlanta was delayed last month after two passengers refused to wear masks.

Flight 1227 was forced to return to the gate at Detroit Metro Airport on July 23 as the pair ‘were non-compliant with crew instructions,’ a Delta spokesperson said, WXYZ reports.

Following the delay, the plane eventually departed for Atlanta. It is unknown whether the passengers were banned from the airline for refusing to wear masks.

Delta has enforced stringent policies when trying to best curb spread of the coronavirus.

Last month, the airline announced that  it will require medical screenings for passengers who can’t wear face masks due to health concerns.

The latest policy change accompanied Delta’s face mask mandate that ensures customers wear them on flights, during boarding and in waiting areas at airports. 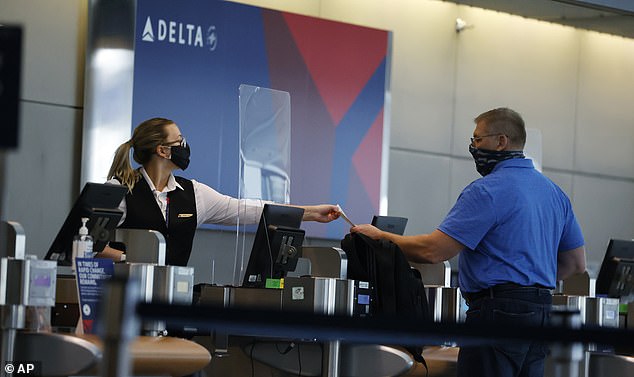 Delta appeared to be the first US based airline to implement pre-departure medical screenings in tandem with its coronavirus-era public health protocols.

‘We encourage customers who are prevented from wearing a mask due to a health condition to reconsider travel,’ the airline said in a statement.

‘If they decide to travel, they will be welcome to fly upon completing a virtual consultation prior to departure at the airport to ensure everyone’s safety, because nothing is more important.’

Delta officials asked that people scheduled for the Clearance-to-Fly screening arrive early to the airport to allow enough time for the process, which can take upwards of an hour. Those who are denied will receive a refund for their tickets.

The airline has also refused to let passengers sit in middle seats and has reduced some of their on-hand services depending on the duration of a flight.