Delta IT meltdown leaves customers stranded for up to 11 hours

Delta passengers suffered hours-long delays on Tuesday after an IT glitch left planes grounded across the country.

One flight, from Las Vegas to New York JFK, ended up being delayed for almost 11 hours amid the chaos caused when the airline’s flight tracking system failed.

Delta began responding to customers around 6.50pm via Twitter and explaining that it was experiencing IT problems which were causing delays.

Adam Katch, flying from Philadelphia to Minnesota, was delayed for six hours and complained via Twitter that he was unable to access the Delta website due to the outage

Around 8.30pm the airline said it had issued a ‘groundstop’ meaning that flights were prohibited from taking off until the issue was fixed.

About an hour later, at 9.20pm, Delta said it had fixed the problem which ‘briefly affected some systems’.

However, customers on the ground complained of lengthy delays due to the disruption, with the worst seeming to hit in Las Vegas.

Kristie Collins, a project manager at digital marketing agency Digitas, was scheduled to fly to JFK at midday but didn’t get airborne until 11pm.

The flight delay began before the system glitch, but according to Collins was made worse by the outage.

Around five hours into her ordeal, she tweeted: ‘No flight update and Delta system is down so there’s nothing they can do for all of the stranded, angry passengers! Terrible customer relations & service! GET US A PLANE!’

Five hours later, she added: ‘Here’s a shock to no one – Delta flight 2492 still isn’t boarding. Wonder if they’re going to let us know about the next delay – 10 hours and counting! Delta Airline sucks.’

Meanwhile customers in Philadelphia, Detroit and Washington DC experienced delays of up to nine hours. 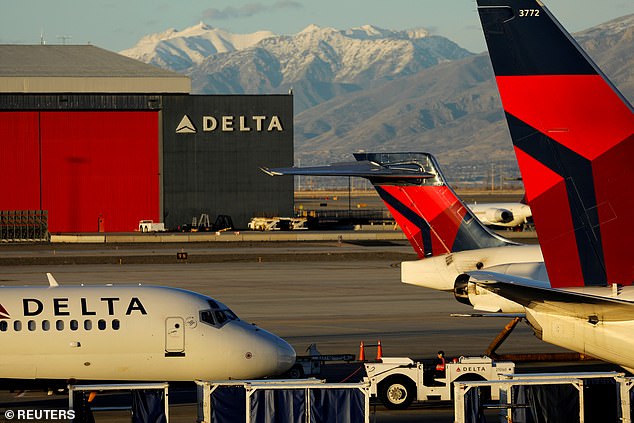 Delta began responding to angry customers around 6.50pm saying it was suffering from an IT problem, before saying that all systems were restored at 9.20pm

Patrick Money, who was flying from Washington Reagan National to Salt Lake City, was delayed by more than eight and a half hours on Tuesday.

He wrote: ‘Wondering how long until Delta tries to do right by its customers on this flight to salt lake. Going on 9 hour delay. Took my day away.’

Meanwhile Adam Katch, who was flying from Philadelphia to Minnesota, was delayed for almost seven hours.

Around 7pm he tweeted Delta to say that the app and website were both down and he was unable to view his boarding pass.

From there the issues snowballed, and around three hours later he was still stuck at the airport.

He wrote: ‘Six hour delay out of PHL. Can I get a refund, and will I ever get home?’

A third Delta statement, issued shortly before 11pm, said: ‘There are currently no Delta flight cancellations following a brief technology issue that prompted an hour-long groundstop for U.S. mainline Delta flights this evening.

‘Additional flight delays and the impact on Wednesday morning’s schedule are expected to be minimal. Delta apologizes to its customers for this inconvenience.

‘Customers flying tonight or Wednesday should check their flight status on delta.com or on the Fly Delta app. All of Delta’s customer tools are fully functional.

‘The technology issue’s impact was limited to the U.S. There was no safety impact on any Delta flights.

‘Delta teams are investigating the root cause of the technology issue.’