Every year more than half of us (57 percent) are given presents we will never even remove from the packaging, new research claims.

From underwear to smellies and novelty gifts, each of us will receive three unwanted gifts worth £26 every year, totalling a staggering £1.4 billion UK wide, according to research.

As many as 79 percent of Brits prefer to give than receive, with 34 percent saying the best present they could have is someone cooking Christmas lunch for them.

A kind-hearted 15 percent would rather friends and family donated to charity than fork out on a gift for them, while a further 15 percent said they would be happy to forgo a gift altogether if it meant they could simply watch what they wanted on TV on Christmas day.

A further 23 percent would prefer their present to be not having to do the washing up after Christmas lunch.

According to the study the majority of us (78 percent) say the thought counts when it comes to giving gifts, however 21 percent said they feel under pressure to ‘out give’ other family members at Christmas time.

John Coventry from GoFundMe, which commissioned the study to mark Giving Tuesday (27th November) said: ‘Us Brits are a generous bunch, the huge growth of GoFundMe in 2018 shows that.

‘This Christmas, alongside those perfect gifts, it might also be great to put something aside for the charities and causes you love on GoFundMe.’ 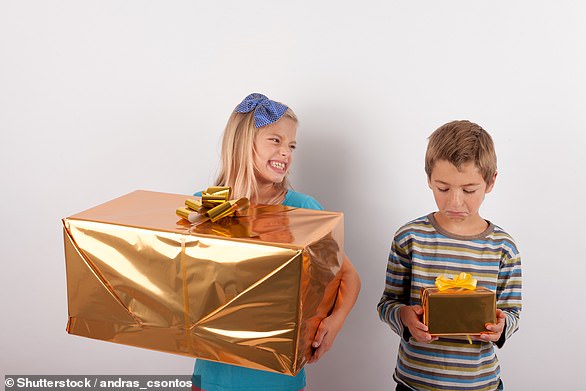 Every year more than half of us (57 percent) are given presents we will never even remove from the packaging, new research claims (stock image)

According to the data this year, the average Brit is planning to spend £113.20 on gifts for friends and family this Christmas, while a further 52 percent say they’re also planning on giving cash to charity this year.

And when it comes to the charitable causes we plan to help out this festive season, giving money to the homeless came out on top (45 percent), while 42 percent plan to help out children and elderly charity groups.

Clinical psychologist Dr Jessamy Hibberd, who looked at the study findings added: ‘Giving triggers the release of endorphins in our brain that make us feel good about it.

‘The good feelings you experience when giving to others may be as important to your health as exercise and a healthy diet. There’s a strong relationship between this kind of activity and increased self-esteem and self-worth.

‘We tend to channel this into the giving of consumer goods, but charitable giving, made easier by technology, means more and more of us are getting this buzz by giving to causes we love.’

It also emerged that the older you get, the more you spend with over 60s expecting to fork out £121 while 16-to-29-year-olds are only spending £95.