She is one of TV’s most influential style icons, and Holly Willoughby’s appeal has shown no sign of fading during lockdown.

Dresses worn by the presenter on This Morning in the two months since lockdown started have sparked a surge of interest from shoppers looking for similar styles, data reveals.

UK-based company Love The Sales analysed searches made through Google and its own website and discovered Holly Willoughby’s choice of dress could boost interest in a given style by almost 90 per cent.

The most popular style was the £120 Tiggy dress by go-to label Ghost, which saw searches for ‘yellow floral dresses’ increase by 86 per cent.

Commenting on the trend, stylist Jessie Stein said: ‘It’s no surprise that Holly’s timeless and accessible style has made her the most influential fashion icon of lockdown.

‘The brands she chooses to wear on TV every weekday benefit from the ‘Holly Effect’ as she shares shots of her outfit in her daily dressing room on Instagram and are seen by her 7 million strong following, often leading to items selling out.

‘Ghost, Whistles and Sandro Paris are a few of Holly’s most worn brands and are perfect for the upcoming summer season’ 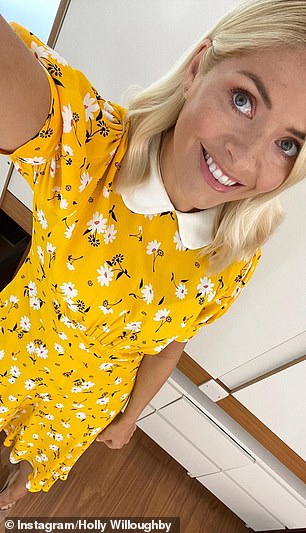 Dresses worn by the presenter on This Morning in the two months since lockdown started have sparked a surge of interest from shoppers looking for similar styles, data reveals. The most popular style was the £120 Tiggy dress by go-to label Ghost, which saw searches for ‘yellow floral dresses’ increase by 86 per cent. Pictured, the dress on TV (left) and Instagram (right)

The 39-year-old returned to the This Morning sofa from a half-term break on Monday 1 June wearing a floral print dress by one of her favourite brands.

Holly donned Ghost’s £120 Tiggy dress with nude court heels for a summery look, as she joined her co-host Phillip Schofield, 58.

She racked up over 60,000 likes on a snap of the outfit that was posted on Instagram, where she boasts almost 7 million followers.

According to Love The Sales, Holly’s appearance in the dress increased searches for ‘yellow floral dress’ by 86 per cent on their site. 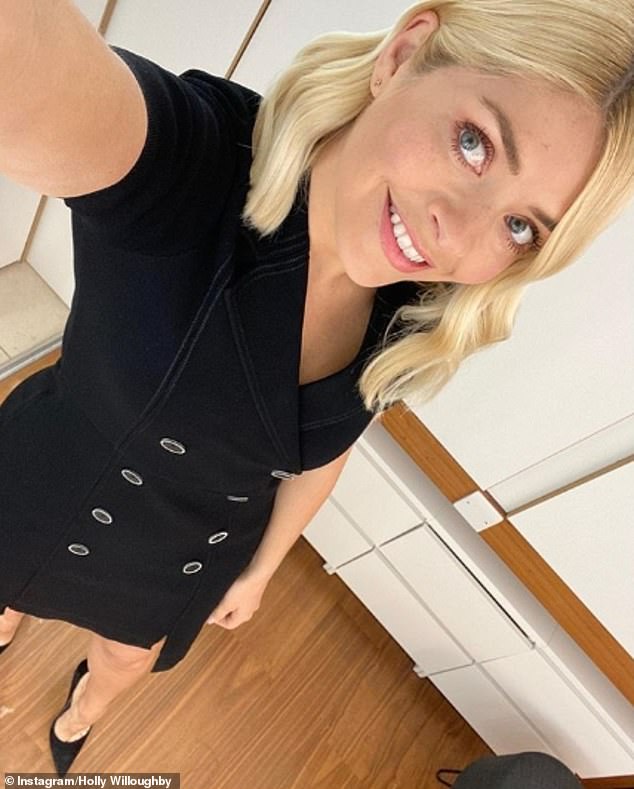 Holly (pictured) paired Sandro Paris’ knitted tailored dress with black court heels, as she returned to This Morning after Easter

Holly Willoughby looked chic as she returned to screens after the Easter break on 20 April, in a tailored fit black mini dress from Sandro Paris.

Sharing a snap in the outfit, she posted on Instagram: ‘Morning Monday… we are back. How are you? Sending you huge amounts of love through your telly today… stay home, stay with us on @ThisMorning 10am Dress by @SandroParis’ 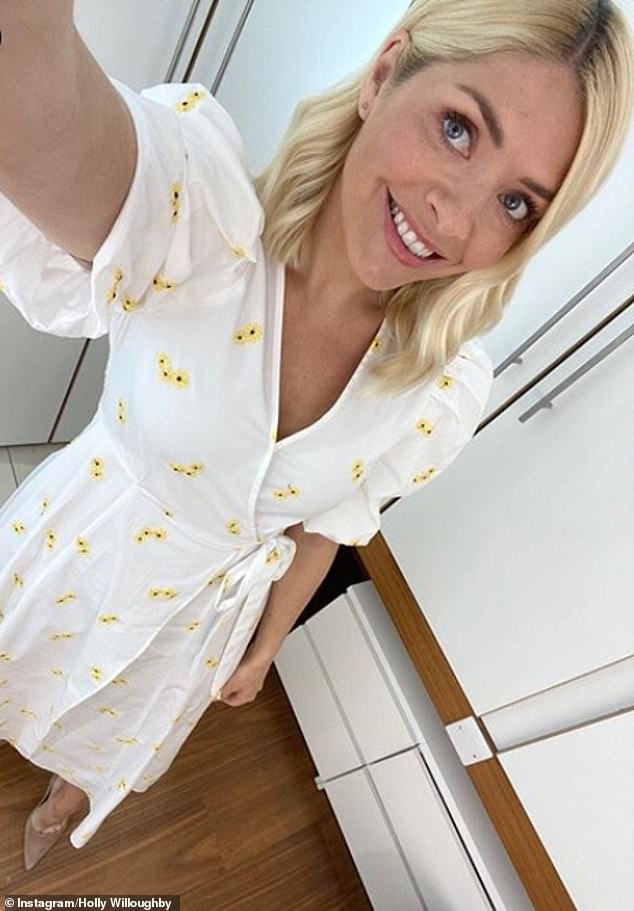 Made from 100 per cent cotton, the British brand claims the dress features statement puff sleeves to accentuate the classic wrap style and has a belt to define the waist.

Holly racked up almost 105,000 likes after sharing a snap in the floral piece on Instagram, with one fan commenting ‘Just ordered mine! Finally back in stock after the Holly effect!!’

Love The Sales noticed that searches for ‘daisy print dresses’ spiked by 79 per cent in the days that followed Holly’s appearance on the daytime show. 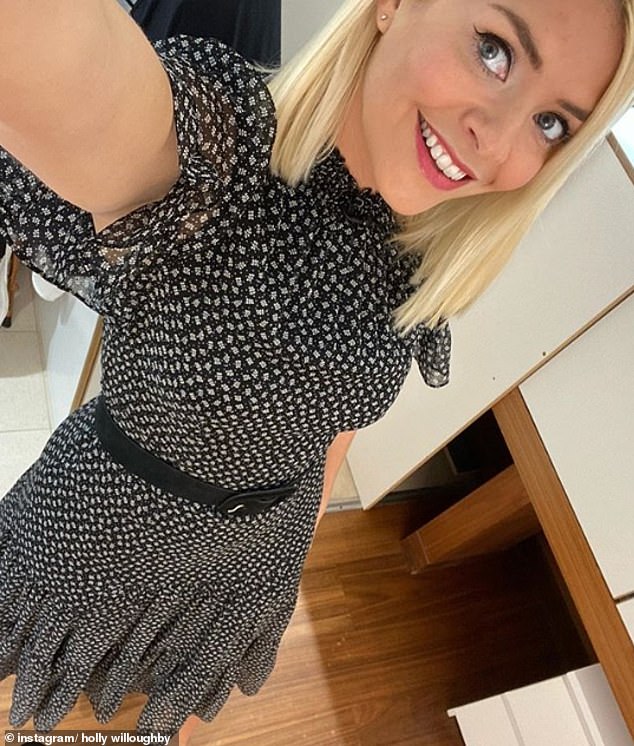 The 39-year-old (pictured) donned Whistles Almond Blossom Misha Dress with black heels, boosting searches for the brand by 77 per cent

Before Whistles Almond Blossom Misha Dress was reduced by £70 and listed in the sales section, Holly Willoughby stepped out in the style with black heels.

The monochrome dress with voluminous detailing is best paired with leather boots according to the High Street brand.

Despite Holly going against Whistles’ styling tip, she received a stream of comments praising the look.

‘This is my absolute favourite dress to date! Hoping to purchase it after this madness,’ wrote one.

The 39-year-old’s appearance in the dress boosted searches for ‘Whistle dresses’ by 77 per cent in the weeks that followed the appearance on 25 March. 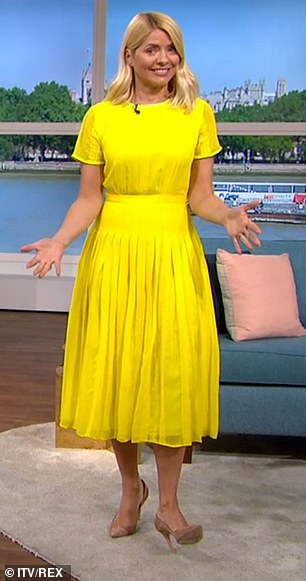 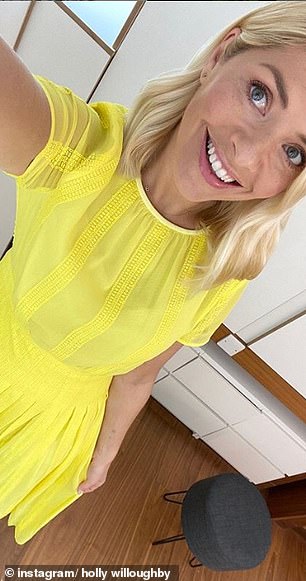 Holly Willoughby (pictured) increased searches for ‘yellow midi dresses’ by 57 per cent, after appearing on This Morning in a style from J Crew as seen on the show (left) and Instagram

Holly paired J Crew’s yellow midi dress with nude heels for her appearance on This Morning on 20 May.

According to Love The Sales her stylish appearance increased searches for ‘yellow midi dresses’ by 57 per cent, making it her fifth most popular lockdown look.

Over 99,000 Instagram users liked her selfie in the dress, with many dubbing it ‘simply sunshine’.

J Crew has described the online exclusive style as versatile and a go-to throughout the season.