Democrat congressman says U.S. needs illegal immigrants to ‘mow our beautiful lawns’ and do jobs ‘Americans are not willing to take’

Tom Malinowski is running for a second term in New Jersey’s swing 7th district. He took the seat in the 2018 mid-term elections from Republican Representative Leonard Lance

A Democratic lawmaker told constituents that undocumented migrants were needed to mow ‘our beautiful lawns’, care for the elderly and do other tasks American citizens were too ‘elitist’ to do.

Democratic Representative Tom Malinowski was speaking at an event in the wealthy New Jersey suburb of Hillsborough when he made the comments.

The politician is running for a second term in New Jersey’s swing 7th district, which has a long history of sending mainly Republican lawmakers to Congress.

Mr Malinowski who took the seat in the 2018 mid-term elections told those gathered at Cafe Brio on Tuesday evening there were a lot of jobs illegal migrants were doing that Americans would not do.

‘There are a lot of jobs in our community, that like it or not, for better or for worse, Americans are not willing to take.’

He cited health aides caring for senior citizens and gardeners as roles commonly done by those without a legal right to reside in the United States.

‘We don’t usually ask, but a lot of those workers are undocumented. There are just not a lot of kids who, sorry, from Montgomery High, who are going to be doing that full time. You guys are going into robotics, for goodness’ sake.’

An audience member can be heard, in a video taken by the Washington Examiner of the event, telling Mr Malinowski he worked at Code Ninjas, a company that teaches coding to children.

‘You work at Code Ninjas — exactly,’ Mr Malinowski replied. ‘You’re a bunch of elitists! You’re not going to mow lawns.’ 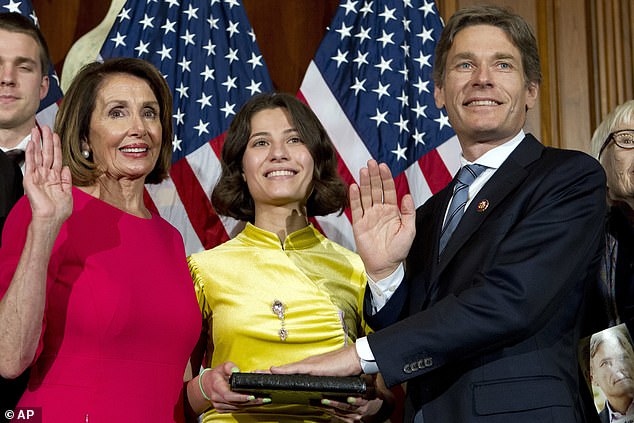 Tom Malinowski during a ceremonial swearing-in on Capitol Hill in Washington earlier this year. This week he told constituents illegal migrants were needed to do menial jobs that many Americans were too elitist to do

The former State Department official, who won his seat 2018 by beating Republican incumbent Representative Leonard Lance, will be challenged by at least three GOP candidates on the 2020 ballot.

Mr Malinowski, who was also the first swing-district Democrat to back a move by more than 120 House Democrats to start impeachment proceedings against Donald Trump, is a frequent critic of the President and his administration.

The group of Democrats had put forward a variety of reasons for his impeachment from the Mueller investigation findings that failed to exonerate the President from allegations of election interference, to his general conduct in office. 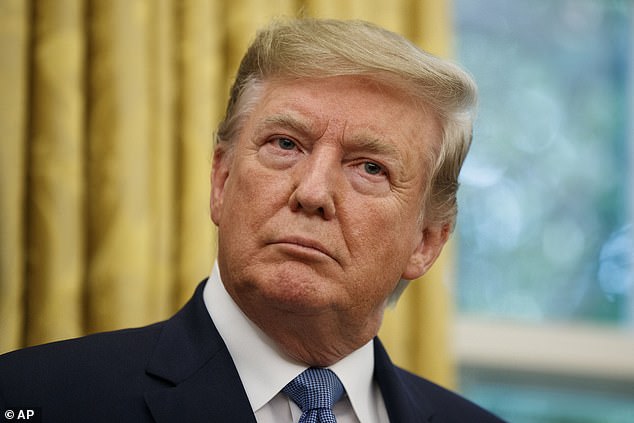 A group of Democrats have been pushing to get impeachment proceedings against President Trump underway.

His stance on immigration, the subsequent increase in arrests of undocumented immigrants and treatment of migrants and their children at the border has caused widespread criticism from those who are not in favor of his policies.

Official statistics show immigrants to comprise about 14 per cent of the population, or more than 43 million of a total of about 323 million.

The number of illegal migrants is said to be about eleven million, a figure which has leveled out since the 2008 economic crisis which served as a disincentive to come to the United States.

President Donald Trump made tackling illegal immigration a central part of his campaign and administration.

Among his campaign promises were his controversial plans to build a border wall with Mexico, to deport millions of illegal immigrants and ban certain nationals from arriving in the United States.