2020 Democrats split over decriminalizing illegal border crossings as moderate Tim Ryan mocks ultra-liberals saying: ‘If you want to come into this country, you need to at least ring the doorbell!’

Democratic presidential candidates openly broke with one another at the second presidential debate over decriminalizing illegal border crossings, effectively instituting the kind of open border policy Donald Trump has warned about.

Senator Bernie Sanders, one of the far-left Democrats on stage on Tuesday night, asserted inside a CNN arena in Detroit: ‘In my view, they are not criminals.’

However, his closest competitor, Elizabeth Warren, told contenders ‘what you’re saying is ignore the law,’ which she said the nation cannot do while promising to get rid of the law that makes it a crime. 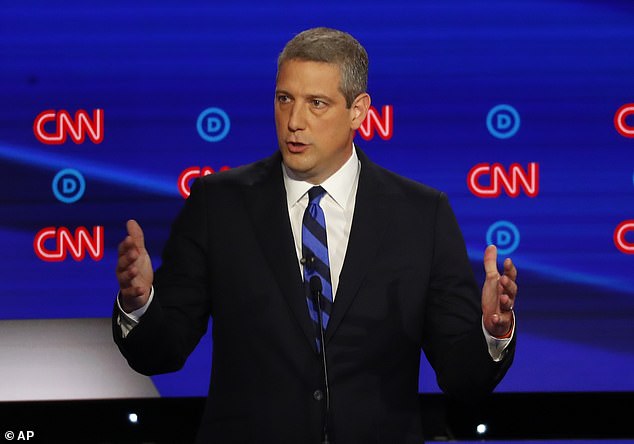 ‘Right now if you want to come into this country, you need to at least ring the door bell,’ he said. ‘You don’t decriminalize people just walking into the United States,’ Ohio Rep. Tim Ryan argued in Detroit 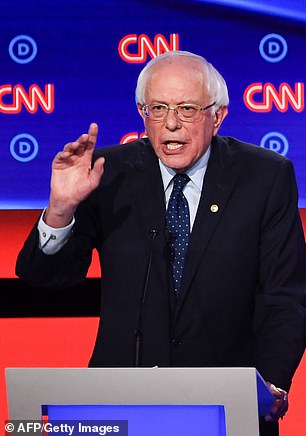 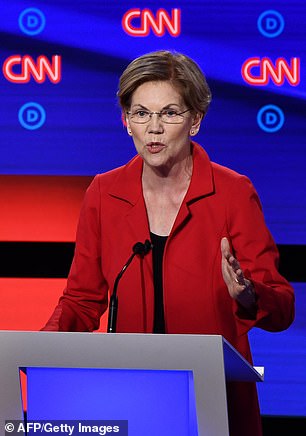 Senator Bernie Sanders asserted: ‘In my view, they are not criminals.’ Elizabeth Warren disagreed and said, ‘What you’re saying is ignore the law’

It set off a debate among the ten Democrats on stage as to whether the country should allow anyone who makes the trek to the United States, regardless of whether they have a legitimate asylum claim, should be allowed to migrate to the wealthy nation.

Ohio Congressman Tim Ryan, a moderate candidate for president, insisted that the policy must remain in place.

‘Right now if you want to come into this country, you need to at least ring the door bell,’ he said. ‘You don’t decriminalize people just walking into the United States.’

Ryan was responding to Warren’s argument that Democratic policies addressing the border crisis must not feed into Trump’s claims.

‘We need to fix the crisis at the border, a big part of how we do that is we do not play into Donald Trump’s hands,’ she’d said.

Montana Gov. Steve Bullock rebutted: ‘You are playing into Donald Trump’s hands. The challenge isn’t that it’s a criminal offense across the border. The challenges that Donald Trump is president and using this to rip families apart the same immigration system needs a same leader and we can do that with that decriminalizing the health care for everyone.’

Warren told him, ‘What you’re saying is ignore the law – and words matter and it matters. If we say that our law is that we will walk people up who come here, seeking refuge and seeking asylum, that is not a crime.’

She said the country must adopt a system that ‘keeps us safe at the border but does not criminalize the mother fleeing.’

Asked if Sanders, who’d been asked the question first, would have illegal immigrants coming to the U.S. in search of free health care, Ryan said, ‘Yes. Right now, if you want to come into the country you should at least ring the doorbell.

‘We have asylum laws,’ he said. ‘It’s shameful what is happening but Donald Trump is doing it and even if you decriminalize, which you should not do, you still have statutory authority and the president could use his authority to separate families.’

Trump has hinged his reelection campaign on the argument that Democrats are for ‘open borders’ and would be a magnet for criminal immigrants and gang members.

His campaign manager Brad Parscale immediately fired back with accusation on Tuesday evening in a tweet that played up the fact that many Democrats on the debate stage believe that the act of entering America without papers is a crime.