Democrats assembled in Washington to hear Donald Trump’s State of the Union speech Tuesday night audibly booed, groaned and hissed at the president as he ran through his list of immigration priorities.

The president’s opponents sat on their hands as he demanded an expensive border wall between America and Mexico in exchange for a path to citizenship for 1.8 million illegal immigrants brought to the U.S. as minors.

But when he insisted on an end to extended-family chain migration and a controversial ‘diversity’ visa lottery, it was too much for some in the House chamber.

Tuesday’s audible discontent marked the second time in two years that Democrats have booed Trump as he outlined his immigration philosophy before a Joint Session of Congress.

WORK WITH ME: Donald Trump outlined his four-prong immigration plan in Tuesday’s State of the Union speech, but heard boos when he talked about ending extended-family chain migration and the diversity visa lottery 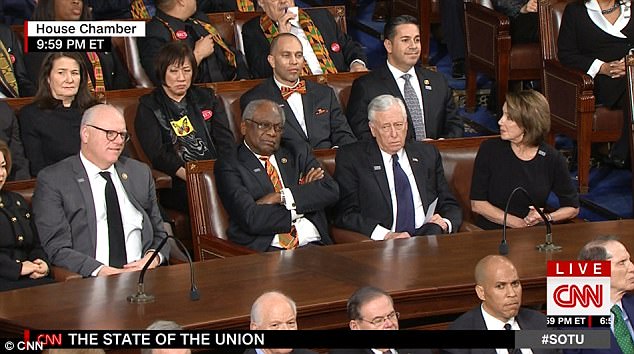 SOUR FACES: Democrats alternatively sat on their hands or booed the president, particularly on the chain migration plank of his reform plan

In 2017 it was the president’s announcement of a new Department of Homeland Security agency to provide services to victims of violent crimes committed by illegal immigrants.

The mention of ‘VOICE,’ short for Victims Of Immigration Crime Engagement, drew scattered boos as Trump described it as a needed program for ‘those who have been ignored by our media and silenced by special interests.’

On Tuesday it was Trump’s contention that chain migration – what immigration advocates call ‘family reunification’ – permits a single green card holder to ‘bring in virtually unlimited numbers of distant relatives.’

Some Democrats shouted ‘No!’ and others groaned or booed. A few barked: ‘Lies!’

The White House said in December that family visa sponsorships accounted for about 70 per cent of all legal immigration to the U.S. between 2005 and 2015.

The U.S. permanently resettled about 9.3 million new immigrants on the basis of their family connections, according to statistics from U.S. Citizenship and Immigration Services.

Mexico topped the list in that category with 1.7 million family-based admissions during that 11-year stretch. 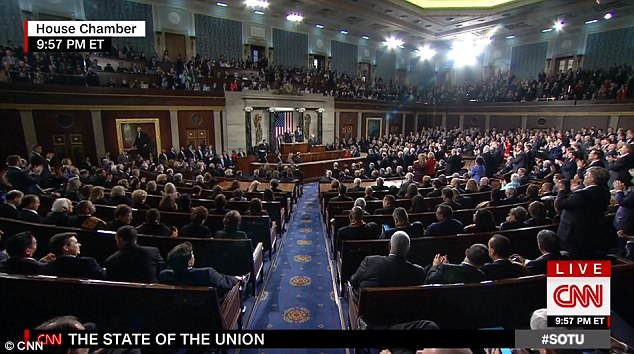 The White House said last year that between 2005 and 2015, 70 per cent of the legal immigrants coming to the U.S. – 9.3 million in all – were admitted on the basis of their family ties with existing immigrants

The diversity lottery, a decades-old program, was intended to beef up U.S. immigration numbers from historically underrepresented parts of the world.

But the Trump administration sees it as a counterproductive randomization of who can live inside America’s borders – at a time when the nation needs new residents with specialized skills and education.

‘It’s time to begin moving towards a merit-based immigration system,’ Trump said Tuesday, ‘one that admits people who are skilled, who want to work, who will contribute to our society and who will love and respect our country.’

Trump pointed to a pair of recent terror attacks that he said ‘were made possible by the visa lottery and chain migration.’

‘In the age of terrorism, these programs present risks we can just no longer afford,’ he said.

Arizona Sen. Jeff Flake, a Republican who has crossed swords with Trump but plans to reture in 11 months, told DailyMail.com after the speech that he wished Trump had focused on the warmest component of his plan – the so-called DREAMers who stand to gain permanent status as Americans.

‘I would have liked a little more positive,’ he said.

‘That was kind of an “American carnage” kind of moment,’ Flake added, referring to a dour line in the president’s 2017 Inaugural Address.

‘Have a DREAMer,’ he urged.

Two dozen members of Congress brought as their guests Tuesday night beneficiaries of the Obama-era Deferred Action for Childhood Arrivals program, the young people who stand to benefit from Trump’s promise.

The president’s guests included the parents of children slain by MS-13 gang members, but no DREAMers.

His promised border wall, which would represent the enduring fulfillment of a key campaign promise, was a mere blip on Tuesday’s radar.

In addition to erecting the physical barrier, he pledged to hire more border patrol officers, and to end ‘the horrible and dangerous practice of “catch and release”.’

‘The White House agenda is to gut legal immigration in exchange for allowing some of the Dreamers to live here. For those of us who support legal immigration, and that’s most Democrats and many Republicans, it won’t fly,’ he said.

‘And the Dreamers themselves have said they do not want legal status if it comes at the expense of others who will suffer more as part of the bargain.’