House Democrats are demanding that the Secret Service release the receipts after The Washington Post reported that the Trump Organization charged the U.S. government $650 a night to stay at the president’s Mar-a-Lago property during 2017.

The Washington Post unearthed records that showed the Secret Service paid $650 a night to stay at President Trump’s Mar-a-Lago resort while guarding the president in 2017, his first year in office President Trump is spotted leaving his Mar-a-Lago resort for an event in Miami during his Florida vacation over the holidays. A Trump Organization spokesperson wouldn’t tell the newspaper what the Secret Service currently pays to stay at the Palm Beach property President Trump is photographed arriving in Morristown, New Jersey last year to spend time at his Bedminster resort. He often spends weekends there as Mar-a-Lago is closed in the summer months 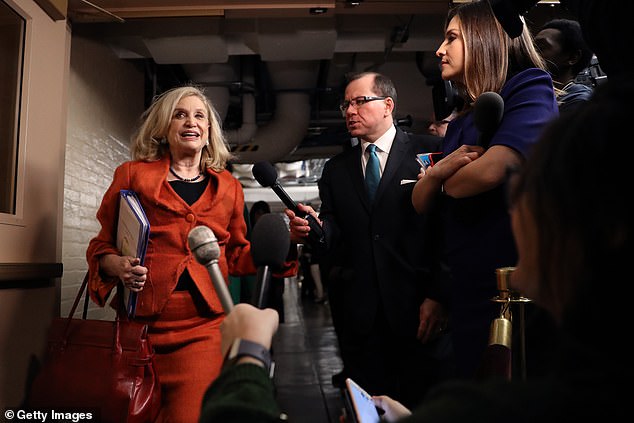 Rep. Carolyn Maloney, along with Rep. Jackie Speier, wrote a letter to the head of the Secret Service requesting documents related to the money the agency spent at President Trump’s property. Maloney chairs the House Oversight Committee The Washington Post also found that the Secret Service had been charged $17,000 in 2017 for a montly rental of a cottage on the grounds of the president’s Bedminster, New Jersey golf club Police and Secret Service guard the exterior of Mar-a-Lago. The Washington Post found that taxpayers were charged more than $650 a night to house agents at the Palm Beach property in 2017

Maloney and Speier also pointed to a Yahoo Finance interview with Eric Trump from October in which the first son and executive vice president of the Trump Organization said Secret Service agents stay at the president’s properties ‘for free.’

‘If my father travels, they stay at our properties for free,’ the young Trump said. ‘So everywhere that he goes, if he stays at one of his places, the government actually spends, meaning it saves a fortune because if they were to go to a hotel across the street, they’d be charging them $500 a night, whereas, you know we charge them, like $50.’

Instead The Post found dozens of instances in 2017 when the Secret Service was charged a $650 a night room rate to stay at Mar-a-Lago alongside Trump.

A company spokesperson told The Post that the Trump Organization does not charge the Secret Service $650 a night, though wouldn’t say whether that’s the rate the president’s security detail was charged in the past.

The Secret Service was also billed $17,000 a month in 2017 to use a three-bedroom cottage on the grounds of the Trump National Golf Club Bedminster, the New Jersey property the president often visits during summer weekends, when Mar-a-Lago is closed.

The Post found that Trump’s company billed the government on days that Trump wasn’t at the property.

Overall, The Post found that the U.S. government was charged $471,000 for Secret Service to stay at Trump properties, but the record is in no way complete.

Eric Trump, responding to the newspaper’s reporting earlier this month said, ‘We provide the rooms at cost and could make far more money renting them to members or guests.’

He didn’t tell the newspaper what the Trump Organization was currently charging the Secret Service.

In the letter, the Democrats point out that the GAO also found that the Secret Service ‘did not consistenly report its cost’ as required by law.

‘The payment of rates far above government rates and the Trump Administration’s lack of transparency raise serious concerns about the use of taxpayer dollars and raise questions about government spending at other Trump properties,’ Maloney and Speier wrote.

‘These concerns are heightened since President Trump has spent a third of his presidency at his private clubs and hotels, and his Treasury Secretary has attempted to shield Secret Service expenses from public scrutiny,’ the two Democratic lawmakers added.