You had one job! Pedestrian has to sprint to avoid being crushed under building being demolished after absent-minded builders let him wander past

A two-story building almost fell on top of a pedestrian as he was walking next to it on the sidewalk without any warning from builders.

The man narrowly escaped what would have been a painful accident by running past the building just before it crumbled in Esquimalt, British Columbia, Canada.

The video shows construction workers using a high reach arm to tear down a two-story building.

A pedestrian in Esquimalt, British Columbia, Canada saw a building being demolished was about to fall on him and sprinted past it as a cloud of dust erupted behind him

The building is quite close to the road where multiple cars are passing and is only blocked off narrowly with a thin fence.

A man walks past the demolition and sees that the side of the house facing the road is about to fall on him.

He picks up speed and sprints off the sidewalk and onto the road to get away from the building as it tumbles down behind him.

A cloud of dust erupts on the sidewalk and the man continues walking, seemingly unharmed.

High reach arm demolition is one of the most common ways of tearing down a building. 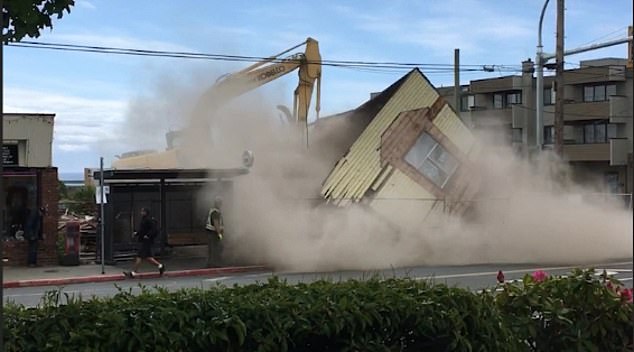 The building crumbled down spilling onto the sidewalk and into the road as the pedestrian walked away, seemingly unharmed