A die-hard football fan who was jailed for dodging strict Covid-19 border rules to watch the AFL Grand Final has opened up about his time behind bars.

Hayden Burbank, 49, was jailed for three months after he hopped the border into the Northern Territory before travelling to WA to watch his beloved Melbourne Demons win at Optus Stadium in Perth last September.

Hayden Burbank, 49, has opened up about his time behind bars after he was jailed for infamously breaking Covid-19 border rules to attend the AFL Grand final in WA (pictured, left)

However, his love of football would cost him 90 days behind bars at WA’s maximum security Hakea prison, and earn him the jailhouse nickname of ‘border breacher’.

Imprisoned alongside heroin addicts and bikies, Mr Burbank described his experience at one of Australia’s toughest jails as ‘the ultimate game of Survivor’.

‘You have to form alliances and not do anything stupid and get through each day by day,’ he told the Saturday Herald Sun. 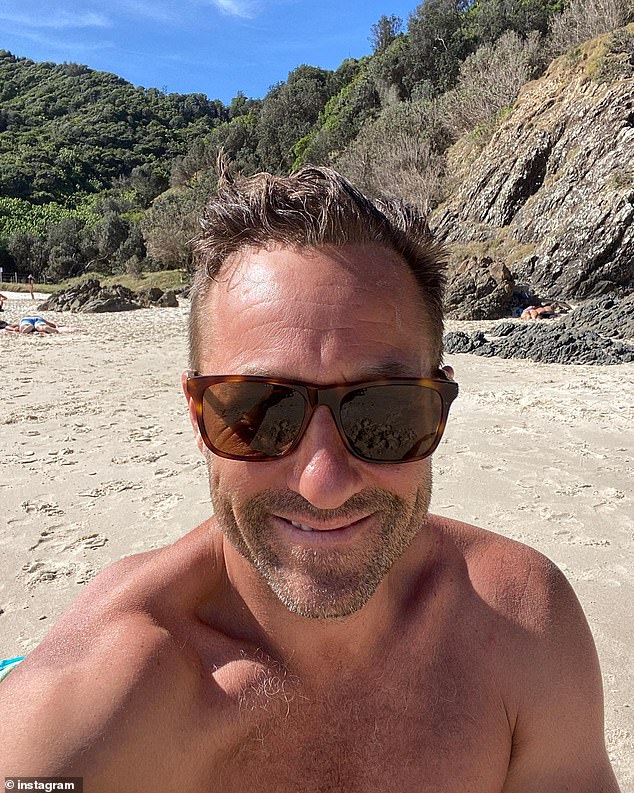 Mr Burbank’s (pictured) love of football would cost him 90 days behind bars at WA’s maximum security Hakea prison, and earn him the jailhouse nickname of ‘border breacher’

The Chapel St bar owner shared a cell with one of the prison’s top dogs, a bikie, who would wake him up each morning and taunt: ‘Border breacher, border breacher’.

But the cellmates soon found out they shared a similar passion for footy with Mr Burbank describing him as a ‘ripping bloke and a mad Sydney Swans supporter’. 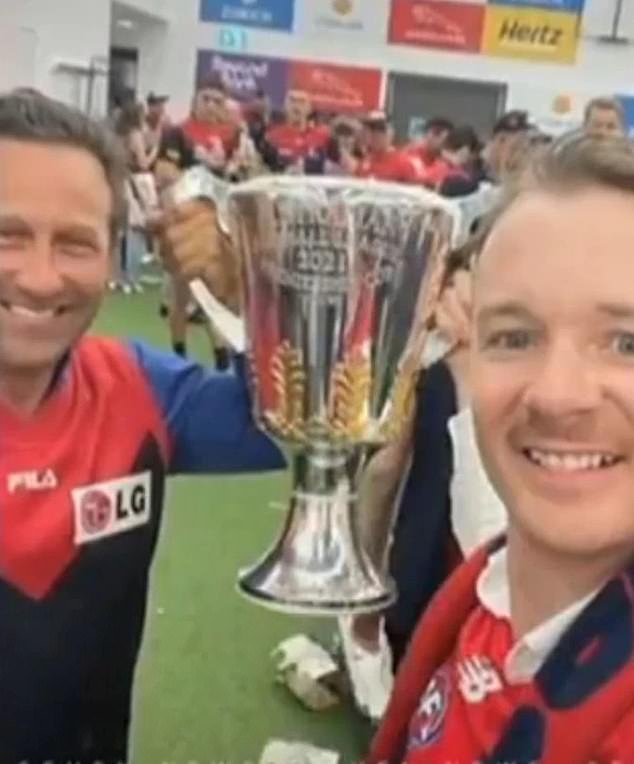 ‘One of the first things he said was he would have done the same thing if the Swans were playing,’ he told the publication.

The bikie, who is rumoured to be the head of the Comancheros, told Mr Burbank: ‘Border Breacher, I got your back’.

The unlikely friendship would help him survive mob bashings and strung out junkies  in one of the prison’s toughest wings, The Ghetto. 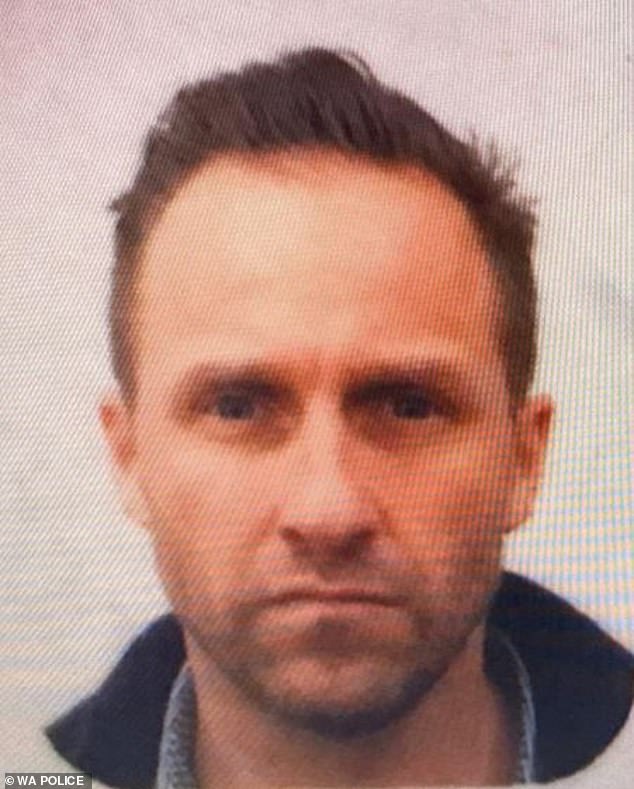 Mr Burbank (pictured) was arrested after a WAG tipped off police

Since his release from prison Mr Burbank admits he knows what he did was wrong and apologised to healthcare workers Australia-wide for ‘kicking dirt in their face’.

‘It’s been a massive life lesson and let me tell you one thing: I won’t be breaking the law ever, ever again,’ he said.

Under strict quarantine rules at the time, Victorians were not allowed into the western state while NT had an open border with WA.

Determined to see his beloved Demons play, Mr Burbank and his friend Mark Babbage, 38, a financial planner, attempted to dodge the border ban using a loophole.

The pair flew to the NT to obtain fake documents which contained a residential address, allowing them to enter WA as NT residents without quarantine. 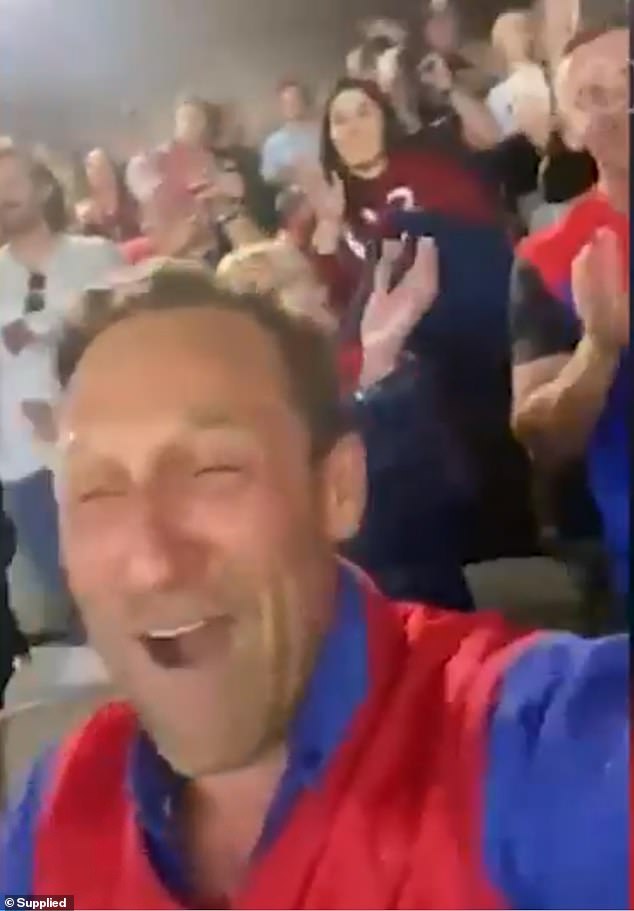 Their plan was foolproof until Mr Burbank received a text from a connection, inviting him into the change rooms to greet his beloved Demons players.

Pictures of him celebrating in the locker rooms had made their way to the AFL’s official Instagram page, enraging WAGs back in Melbourne.

One WAG in particular had made furious calls to police and questioned how Mr Burbank had made it into the rooms under strict Covid-19 restrictions.

Police launched a state-wide manhunt and eventually arrested the pair near Margaret River after a weekend getaway.

‘As far as the club is concerned, the only people that should’ve been in there, were the 75 in the travel party and 100 people who were approved to receive a wristband,’ Melbourne football club chief executive Gary Pert said at the time.

‘I don’t know how someone gets in if they are not on the list… There were a lot of key people we would’ve loved to have in the room but we needed to meet the AFL guidelines.’ 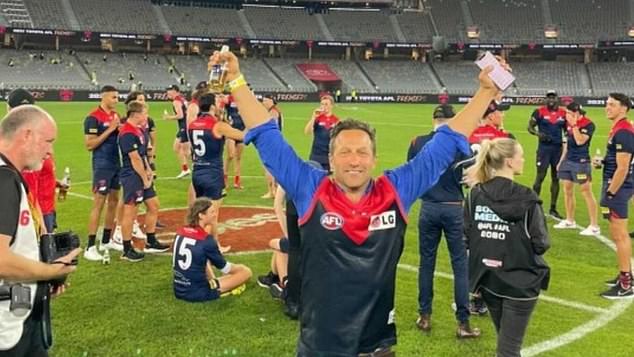 On Tuesday Babbage was spared another jail sentence, having pleaded guilty in a Darwin court to three charges related to breaching the state’s Covid laws, and the driver’s licence and rental agreement.

‘His course of conduct … was foolish and dishonest and deceitful, wrongheaded,’ Judge Woodcock said as reported in The Age.

Burbank had earlier been given a six month suspended sentence and a 12-month good behaviour bond after he pleaded guilty to four charges.

The pair had arrived in Darwin on September 14 and then flew to Perth eight days later.

Mr Burbank and Mr Babbage filmed themselves cheering after the Demons took the win for the first time in 57 years.

‘Yes, we f**king did it’, ‘Oh, my God’ and ‘Come on Demons’ they exclaimed in celebration.

Burbank is a self-described millionaire who owns the exclusive cocktail bar and nightclub Morris Jones in the ritzy Melbourne suburb of Prahran.

Babbage lives in Hawthorn, works as a financial planner and mortgage broker and is related to a wealthy family from well-to-do Toorak.