Former Melbourne Demons co-captain Nathan Jones has taken offence at the comments made by Steven May that led to the recent punch-up with teammate Jake Melksham at a Prahran restaurant.

The one-time co-captain of the Demons could manage just eight games in 2021 due to ongoing hamstring and calf injuries that ultimately ruled him out of their finals campaign. He retired after the grand final on 302 AFL games.

Jones has taken exception to the sledging between players who lined up in the grand final and those who did not.

It has been reported that players were jokingly sledging Joel Smith by saying words to the effect of: ‘[organising] this [dinner] is the best thing you’ve done all year’.

Melksham reportedly stood up for Smith when May fired back at him: ‘How would you know [how we talk to each other], you usually play in the twos’.

That was when the banter escalated into an incident that saw Melksham punch May, leaving him needing two bouts of surgery on his infected hand.

The fullback is also alleged to have told Melksham that the Demons would have lost the grand final had he played instead of being ruled out due to an injury.

Jones was highly disappointed to learn about the ructions in the club and the allegations of a divide between the players who lined up in the grand final and those who didn’t.

‘I’ll be brutally honest, as soon as I heard that without even having spoken to anyone, I absolutely took offence,’ Jones said on AFL Nation.

‘It hurt me… you can only imagine, I don’t know how many boys were there on the night, but say there’s two or three that didn’t play and that infiltrating back into the group of the 20-odd guys that didn’t play as well.

‘I think that’s the danger of it, but ultimately you’d hope internally they’re able to address that.

‘Steve had done a lot of work to build himself into the position he’s in and as a lot of us know, when you’re trying to change perception you can take 50 steps forward and one step back.

‘So there will be an element of him having to earn the boys’ trust and stuff again and he’ll have some work to do, no doubt.

‘But ultimately I don’t think it plays a significant part culturally as to where the team ends up going.’ 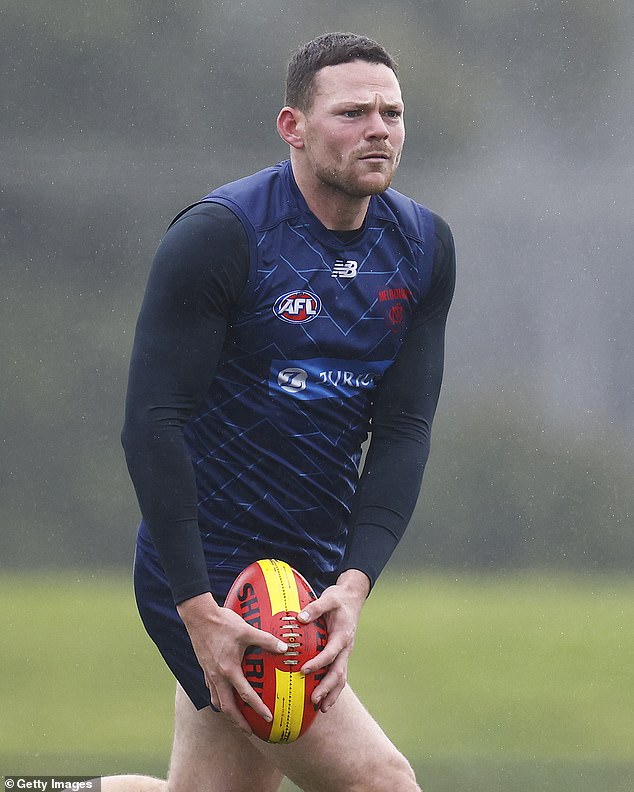 The fight between May and Melksham was allegedly sparked because Melksham was sticking up for Joel Smith, who was being targeted for missing the 2021 AFL grand final

Meanwhile, the restaurant where the clash occurred has backflipped on its decision to ban AFL players after the Demons apologised for the incident.

Entrecote owner Jason Jones initially labelled their behaviour ‘disgraceful’ but has now told the Herald Sun that May and Melksham would be welcome back after the apology.

‘They were in a private dining room then it spilled out to the front of the restaurant. But they have apologised and we accept their apology,’ he said.