Democrats giddy at the prospect of taking control of Congress if they win the mid-term elections are making lists of Trump insiders they want to bring back to Capitol Hill.

Trump confidantes like Hope Hicks, the former White House communications director, and Donald Trump Jr., the president’s eldest son, have already provided closed-door testimony to lawmakers on allegations of collusion with Russia in the 2016 presidential campaign.

Hicks and other former officials like Steve Bannon relied on executive privilege in their testimony the first time around, and some Democrats are eager to have another crack of the bat, Politico reported.

Democrats are cautiously approaching the subject, as well as their hopes to impeach Trump, as they compete this fall on the ballot.

Trumpeting their plans to haul the president and his associates before Congress could backfire, and they’re leading the generic ballot without it.

In a polling average compiled by Real Clear Politics, Democrats led their Republican competitors by eight points across the country. Those polls don’t look at specific races but are taken to get a general sense of the mood of the country.

Republicans, once down by double digits, have been catching up nationally over the last two weeks. An Economist poll had the margin down to four points this week.

President Trump warned Thursday that voters can expect ‘bad things’ to happen to the country if Democrats win control of Congress.

Trump said the Supreme Court is a prime example. He also suggested that Democrats would seek to eradicate the Second Amendment.

‘If we’re not there to protect, it is going to be some really bad day for this country,’ he said of the potential for Democrats to take control of the House and Senate. 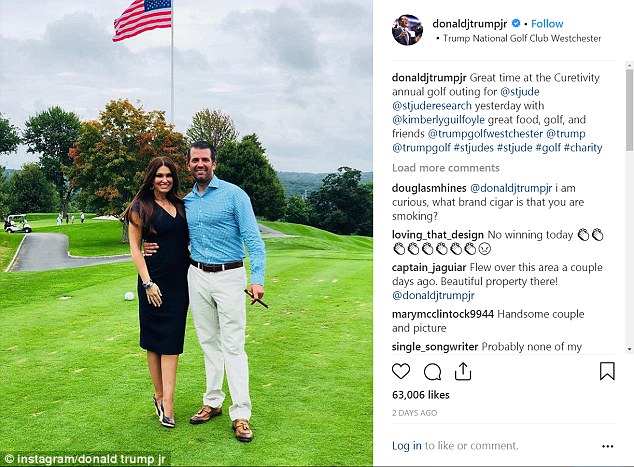 In the interview with Fox News’ Sean Hannity that aired live before a Las Vegas rally, Trump promised, ‘We’ll get everything we want. We need more Republicans.’

Trump noted that the stock market had reached an all-time high just before the interview, buoying up 401(k) investments.

‘If the Democrats get in, those numbers will be cut in half. You will see bad things,’ he said.

One thing is for sure if Democrats win control of Congress: they’ll ramp up inquiries into the the president and his associates.

Democrats are likely to reopen their colleagues’ closed Russia probes to interview witnesses and obtain testimony they weren’t able to the first time around, Politico reporters.

Democrats in line to take over the committees if their parties win control of Congress are already making lists of who they want to call up like Dan Scavino, the president’s social media director. Scavino is frequently seen at the side of the president.

Lawmakers still want to question Hicks, Don Jr. and Jared Kushner about a meeting that took place in June of 2016 at Trump Tower with a Russian lawyer.

Rep. Adam Schiff, the ranking Democrat on the Intel Committee, framed it as using his power, if he takes the top slot, to assist special counsel investigators with their review of Trump and his associates.

‘It would certainly be a more cooperative relationship, and we would want to have the special counsel aware if witnesses are committing perjury or if witnesses are providing information that would be relevant to their investigation,’ he said.

Other Democrats have said that they believe that Americans are tiring of the Russia probe and want to wrap up their work by the end of the year regardless of what happens in the mid-term elections.

‘The American public will be tired of it if this is not wound down in this calendar year,’ Sen. Mark Warner, the ranking Democrat on the Senate Intel Committee, said at a May conference.