Poland and Denmark are banning companies that are registered in tax havens from accessing financial aid during the coronavirus pandemic.

Denmark, which has spent billions on aid for companies experiencing drastic drops in revenues due to a wide-ranging government lockdown, announced an extended aid package worth 100 billion Danish crowns (£11 billion) on Saturday.

But in an amendment to the aid measures, which now total close to 400 billion crowns, companies registered in tax haven countries will no longer be eligible for aid.

The Danish finance ministry said in a translated statement: ‘Companies seeking compensation after the extension of the schemes must pay the tax to which they are liable under international agreements and national rules.’

‘Companies based on tax havens in accordance with EU guidelines cannot receive compensation, insofar as it is possible to cut them off under EU law and any other international obligations.’

Additionally, firms applying for an extension of Danish state aid must now promise not to pay dividends or make share buy-backs in 2020 and 2021, it said.

The new restriction applies to firms registered in countries on the European Union’s list of ‘non-cooperative tax jurisdictions’, according to Rune Lund, tax spokesman for the leftist Red-Green Alliance.

‘When we spend billions of taxpayers’ money on saving companies and jobs, they need to go to that purpose and not get sent to a tax haven on the other side of the world,’ Lund told Reuters.

The list, which Lund said was not comprehensive enough, currently has 12 countries on it including Panama, the Seychelles and the Cayman Islands. 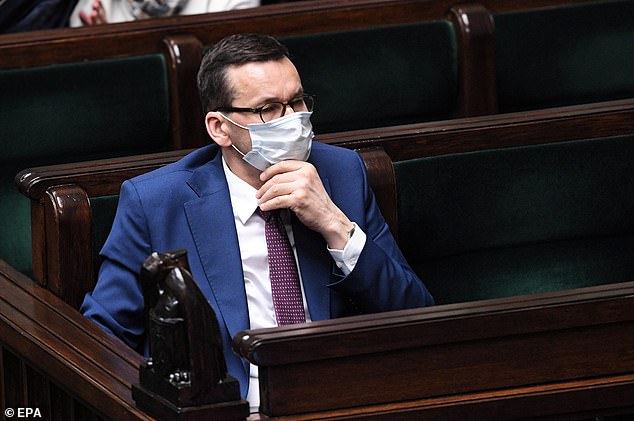 The government said companies would be allowed to pay dividends again if they pay back aid.

Poland, one of Europe’s most vocal opponents of tax havens, was the first to restrict large firms’ access to state aid based on whether they pay taxes in Poland on April 8.

Polish Prime Minister Mateusz Morawieck said that companies must pay domestic business taxes before they can claim any of the country’s £5 billion bailout funds.

‘Let’s end tax havens, which are the bane of modern economies,’ he said.

Estimates of tax evasion vary widely, but tax havens collectively could cost governments between $500 and $600 billion a year in lost revenue from corporates, according to some researchers.