Denmark has passed legislation banning full-face veils, such as the burqa and niqab, being worn without a ‘recognisable purpose’

Denmark has voted to ban the niqab and burqa, becoming the fifth European country to pass such a law.

Lawmakers voted 75-30 in favour of the legislation which had been put forward by the governing centre-right coalition.

Technically the law bans any full-face garment where there is no ‘recognisable purpose’ for wearing it, such as cold weather or complying with laws such as wearing helmets on motorcycles.

Politicians insist the law does not target any religion, but it has become known colloquially as the ‘burqa ban’.

Headscarves, turbans and Jewish skull caps will not be affected by the law.

Justice Minister Soeren Pape Poulsen said that it will be up to police to use their ‘common sense’ when enforcing the law, which will apply from August 1.

Anyone forcing a person to wear garments covering the face using violence or threats can be fined or face up to two years in prison.

At least half of Germany’s 16 states have bans on teachers and public servants wearing full-face veils.

In 2016 Angela Merkel proposed banning full-face veils ‘wherever it is legally possible’, though no national legislation has yet been passed. 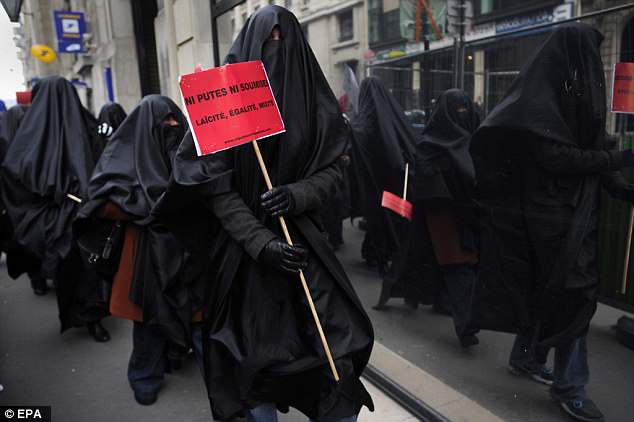 Denmark is the fourth European country to pass such a law, after similar bans in Austria, Belgium and France (pictured, protesters oppose the French law)

The Netherlands, Italy, and Denmark also have partial burqa bans, though they are confined to specific towns, public places, or jobs.

Gauri van Gulik, Amnesty International’s Europe Director, said: ‘All women should be free to dress as they please and to wear clothing that expresses their identity or beliefs.

‘This ban will have a particularly negative impact on Muslim women who choose to wear the niqab or burqa.

‘Whilst some specific restrictions on the wearing of full-face veils for the purposes of public safety may be legitimate, this blanket ban is neither necessary nor proportionate and violates the rights to freedom of expression and religion.

‘If the intention of this law was to protect women’s rights it fails abjectly. Instead, the law criminalises women for their choice of clothing and in so doing flies in the face of those freedoms Denmark purports to uphold.’