Denmark SPEEDS UP its lockdown exit, opening museums and zoos

Denmark SPEEDS UP its lockdown exit, opening museums and zoos weeks ahead of schedule as R infection rate falls to 0.6

Denmark began re-opening museums and zoos ahead of schedule today as virologists said the virus epidemic was slowing despite the lifting of quarantine measures.

Museums, zoos, theatres and cinemas were due to stay shut until June 8 – but the Danish government has decided to accelerate the end of the lockdown.

A deal agreed in parliament last night will also see the border opened to residents of Nordic countries and Germany who want to visit relatives or second homes.

The Danish health agency SSI said the coronavirus rate of transmission (R) had fallen to 0.6, down from 0.7 on May 7, meaning that the outbreak is slowing.

An R rate of 0.6 means that 100 virus patients typically infect another 60 people, meaning that the number of cases falls over time.

A rate above 1.0 means that the epidemic is accelerating, and several countries have identified it as a key indicator of whether it is safe to resume normal life.

Denmark began loosening restrictions in mid-April, and says the lifting of lockdown has not caused a surge in new cases.

Last Friday, the country reported no new coronavirus cases for the first time since the crisis began to engulf Europe in March.

However, another SSI report showed that only one per cent of Danes were carrying antibodies – raising fears that the country could be vulnerable to a second wave. 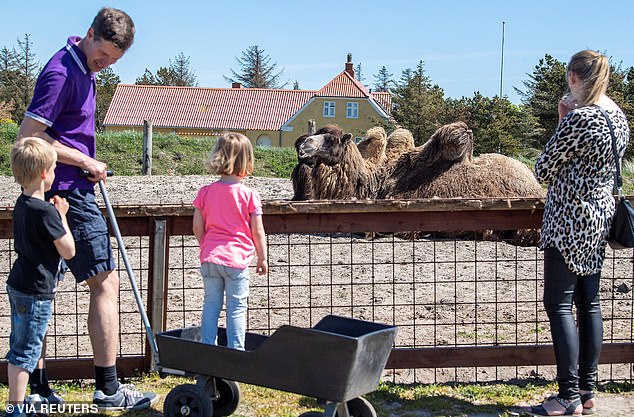 People look at the animals in Blaavand Zoo today, after Denmark decided to accelerate the end of lockdown with the rate of transmission falling

Danish authorities have reported 11,182 cases and 561 deaths in total, while only 18 people are currently in intensive care.

Some museums opened their doors as early as today, although others will wait until the weekend or next week.

‘It was pure cheer. Finally, we can get started,’ Peter Kjargaard, director of the Natural History Museum of Denmark, told broadcaster DR.

Kjargaard added that he was excited to show off the museum’s new dinosaur exhibit, although it will not be finished for another month.

The border remains closed, but the list of exceptions will be expanded to include permanent residents of all the Nordic countries and Germany wanting to visit relatives, loved ones or homes they own in Denmark.