Prager, 71, launched into the bizarre rant during the weekly fireside chat on his YouTube channel PragerU on April 30 saying he even refuses to take a clean fork when offered to him.

‘If I am at a restaurant and my fork or knife falls, I pick it up and use it,’ Prager said.

‘They rush over to give me a new one, like I am flirting with death if I take the fork from the floor. And my view is there’s no reason to come over. The fork fell on the floor. What did it pick up, diphtheria?’

Prager went on to use his anecdote as a way to downplay the spread of coronavirus, saying he is not worried about the pandemic.

‘Am I going to get pancreatic cancer from a fork that fell?’ he said. ‘These things – I’m not troubled by these things.’

Many listeners took to social media to blast his comments with one person comparing his advice to President Trump’s suggestion that people inject themselves with bleach to protect them from the virus.

‘I thought Trump’s drinking bleach was stupid, but licking forks from a dirty floor to show us the virus is b.s wow! Time for me to join the Dems and leave the COP which now equals = dumb, stupid, and haters of truth and science. God is watching all this crazy!’ one person tweeted.

‘Not likely you’ll get diptheria, but a pretty good chance you’l lick some e-coli from the floor,’ posted another person.

This marks the latest in a string of shocking claims made by the controversial radio host to his loyal fan base of more than 2.4 million subscribers, while the pandemic ravages America.

In recent weeks, Prager has been attempting to push the drug hydroxychloroquine – often touted by Donald Trump – as a way of treating coronavirus before calling the lockdown ‘the greatest mistake’ in history.

This marked a major backtracking from his previous statements where he dismissed the virus as less lethal than the flu or snakebites.

‘I mean, how many people have died this year in the United States from snake bites? I don’t know, I should have looked it up before talking to you. But there is certainly a number,’ he said back in March.

Many listeners took to social media to blast his comments 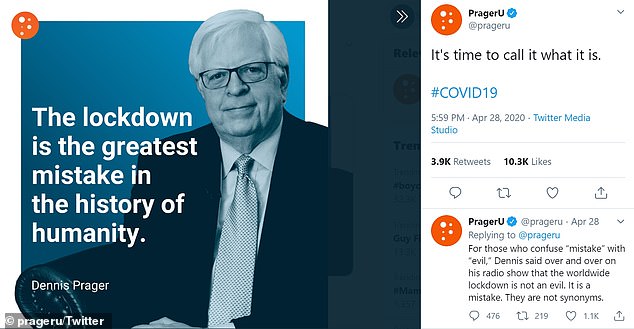 In recent weeks, Prager was attempting to push the drug hydroxychloroquine as a way of treating the coronavirus before calling the lockdown ‘the greatest mistake’ in history

He later insisted that coronavirus is ‘not a killer’ and said he would only accept stay-at-home orders if around 30,000 people died from the virus.

When the death toll passed this level, he revised his demands again.

As well as downplaying the pandemic, Prager also used his show as a mouthpiece to air his grievances about political correctness earlier this month, blasting the loss of society’s use of racist language and offensive slurs. 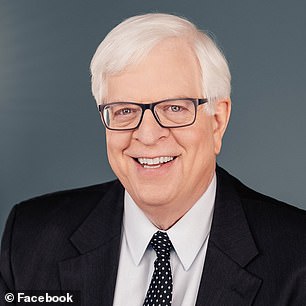 Prager, 71, launched into the bizarre rant during the weekly fireside chat on his YouTube channel PragerU

‘How many names have Blacks gone through in my lifetime?…What was wrong with Negro? What was wrong with colored? African American? Black? Four different titles for the same human being. There’s no problem with any of them,’ Prager said in a clip from his radio show posted to Twitter.

‘You know, the NAACP is still the National Association for the Advancement of Colored People,’ Prager said. ‘And then African American — that changed, too. Does that have a dash, hyphen or not? I don’t remember what was connoted by having a hyphen or not.’

This came after the radio host complained that he was unable to use another racist insult earlier this year.

‘It is idiotic that you cannot say the N-word,’ he said on his show in February  according to Media Matters.

‘The left has made it impossible to say the N-word any longer. That’s disgusting, it’s a farce. It’s the only word that you can’t say in the English language,’ he said.

‘Of course, you should never call anybody the N-word, that’s despicable. But to say the word? You cannot even say that the word is despicable. You have to say ‘the N-word.’

‘It’s like conservatives don’t consider the history of anything and lack basic empathy for those experiences,’ wrote one Twitter user in response to the outburst.