ESPN’s critically acclaimed docuseries The Last Dance has left fans pining for more as it focuses on Michael Jordan and the Chicago Bulls’ winning 1997-98 season.

After the first two instalments dug deep into the Bulls’ Holy Trinity of Jordan, Scottie Pippen, and coach Phil Jackson, the third and latest episode opened up on one of basketball’s most colourful characters – Dennis Rodman.

At the time, Rodman was one of the league’s most controversial stars both on and off the court but still made up one third of the greatest trio – along with Jordan and Pippen – to dominate the NBA. But why did he make the headlines for the wrong reasons?

Here, Sportsmail takes a look into 10 of the craziest stories involving Dennis Rodman.

Throughout his career, Rodman paid hundreds of thousands of dollars in fines for his on-court and off-court antics.

One of his more fiery outburst came in a regular season game against the New Jersey Nets in March 1996, when he picked up two technical fouls in a game and was subsequently given his marching orders to the locker room.

Left incensed by the call, Rodman took up the issue with referee Ted Bernhardt before screaming in his face and grazed the official with a headbutt.

Rodman, who was 34 at the time, made a scene as he left the court by removing his jersey and knocking over a water cooler in the process.

He received a a six-game suspension without pay and was fined $20,000. 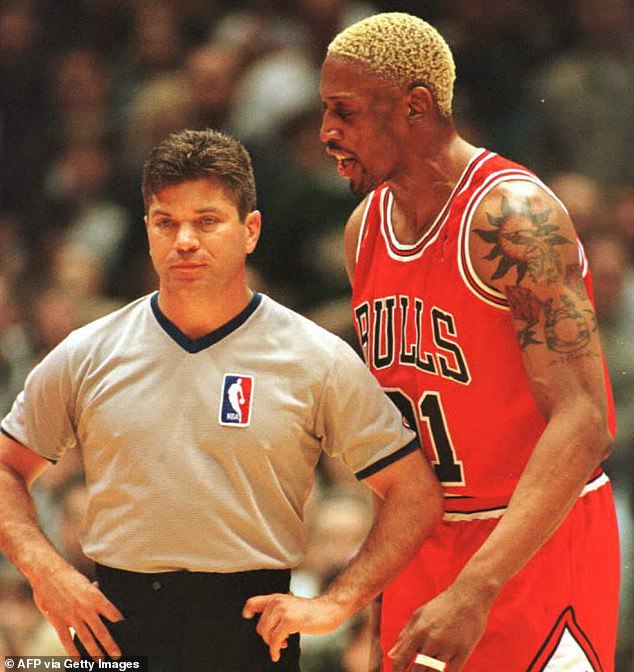 A longtime fan of the band Pearl Jam, Rodman attended one of their gigs in Dallas in 1998 before taking to the stage himself topless and with no shoes on while ‘swinging a bottle of wine around’.

One critic in attendance claimed that the power forward stayed on stage with the band for 45 minutes before they got tired of his antics.

After attempting to provide backing vocals for ‘Alive’ and ‘Corduroy’, he finally left after having his microphone cut off, much to the relief of the band. 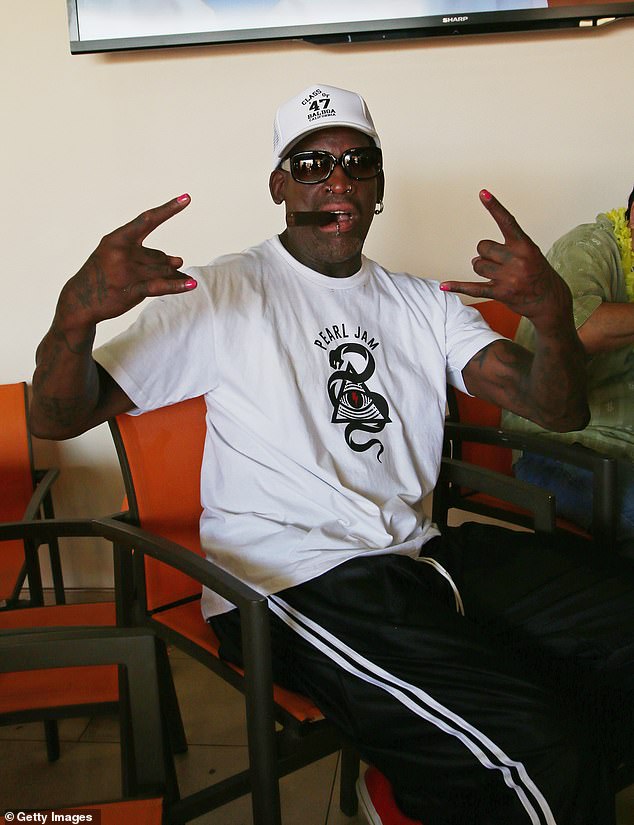 Having previously mentioned that Rodman had a fiery temper, this next incident landed him in even hotter water.

During a game against the Minnesota Timberwolves, the Bulls star tripped over cameraman Eugene Amos, who was sitting just by the basketball stanchion.

As the red mist descended, Rodman lashed out at Amos by kicking him in the groin, which reportedly led to Amos to lose consciousness before he was carried off on a stretcher and taken to a nearby hospital for treatment.

The kick, which came the season after he headbutted the aforementioned Bernhardt, saw Rodman receive a strong punishment as the NBA fined him $25,000 and suspended him for 11 games without pay.

Rodman also agreed to pay Amos $200,000 for the damage he inflicted, which ultimately cost him an estimated $1million in total.

Following his decorated career, Rodman remained on America’s TV screens but in a different capacity.

With his basketball career now behind him, the five-time NBA champion tried his hand at reality television – but was fired by now-US president Donald Trump because of a spelling error.

Appearing on Celebrity Apprentice, Rodman was the sixth contestant to be booted on in the 13th edition of the program having spelled future First Lady Melania Trump’s name ‘Milania’ on a poster for her skin-care line. 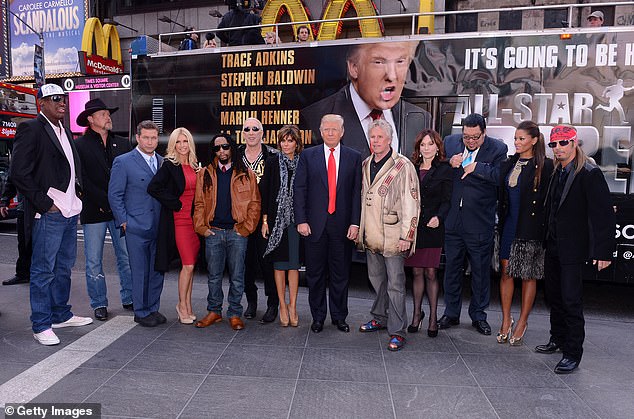 He is close friends with Kim Jong-un

Onto another world leader now and this entry is one of the most far-fetched of the lot.

As a part of a Vice documentary on the hermit kingdom of North Korea, Rodman met the country’s Supreme Commander Kim Jong-un – a self-professed basketball fan who was fascinated with the Chicago Bulls team of the 90s.

The meeting in 2014 garnered a lot of media attention considering how difficult it is to get in and out of the East Asian country.

What was more incredible was that Rodman and Kim Jong-un became good friends, with the former Bulls star pledging to be the dictator’s ‘friend for life’ while promising to visit him again.

While over in North Korea, Rodman and other NBA stars played an exhibition game against the Korean men’s basketball team in celebration of Kim’s birthday.

There are reports that Rodman misled those involved in the game about the nature of the trip which saw many of them receive plenty of backlash by human rights activists. 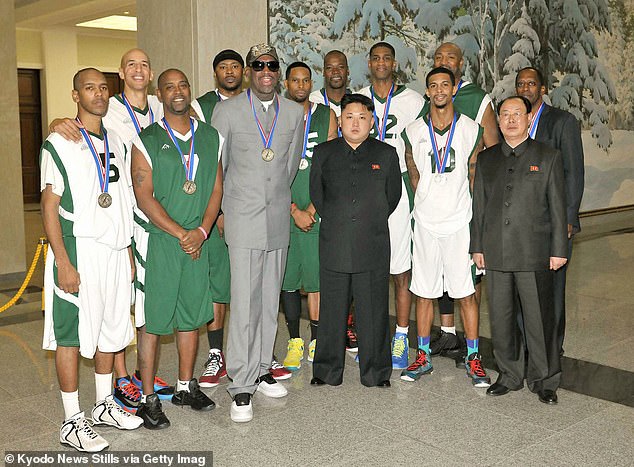 In a three-week span in late 1993, Rodman grabbed over 24 rebounds without scoring any points in THREE separate games

While he was known for creating headlines off the court, he would certainly put in amazing performances on it.

Known for doing the dirty work for the Bulls during their dominant spell in the 90s, his relentless pursuit to get rebounds saw him become of on the best players in the backcourt.

During his spell with the San Antonio Spurs, Rodman went on an early-season run where he would collect an absurd amount of rebound but score zero points in the process.

In three consecutive games, Rodman collect over 24 rebounds in each contest but only attempted seven shots in total.

On December 1, 1993, the eccentric Rodman collected 28 rebounds while failing to put up any points which has earned him a spot in the sport’s record books. 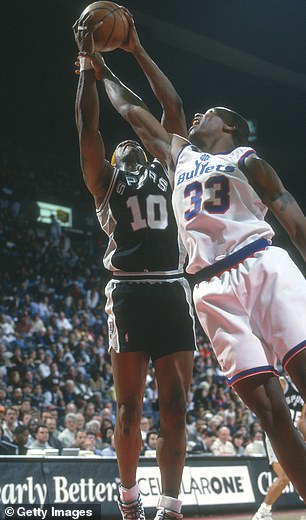 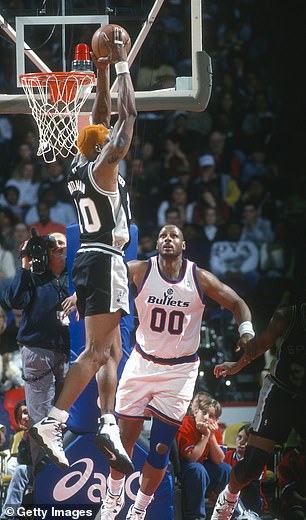 During his spell with the San Antonio Spurs, Rodman broke rebounding records in 1993

The less said about this one, the better.

During a documentary called ‘Party Legends’ by Vice, Rodman reveals how he broke his manhood on three separate occasions while trying to make love.

Rodman said one of the times involved the woman taking a running leap before the act of love-making but missed. Ouch.

He was fined $50,000 for breaching hate speech policy about Mormons

On the same night as the ‘flu game’ – one of the most iconic games in Michael Jordan’s career and NBA history – saw Rodman strike controversy once again but this time, it was for breaching the league’s hate speech policy.

Following the Bulls’ historic win over the Utah Jazz in Game 5 of the NBA Finals, Rodman complained about the ‘f***ing Mormons’ in the stands. Utah is widely associated with Mormons and Rodman’s comments landed him the largest player fine in NBA history for his troubles.

Rodman tried defending himself at a later date, suggesting he didn’t know Mormons had religious ties.

‘If I knew it was a religious-type deal, I never would have said it,’ he said. 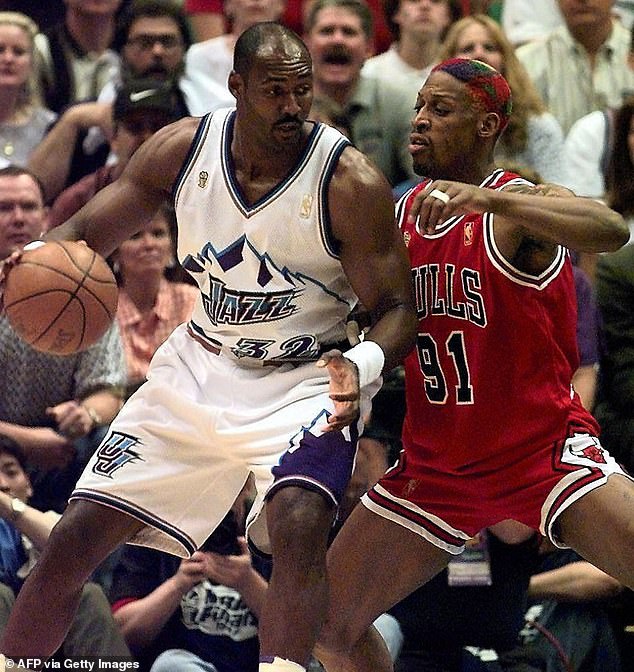 During the 90s, professional wrestling was at it’s most popular as WWE (then named WWF) went head-to-head with WCW in the ‘Monday Night Wars’ – a battle for the TV ratings.

And with wrestling the hottest thing on the planet at the time, it was only logical that Rodman would make an appearance alongside the iconic Hulk Hogan.

While his appearance on WCW thrilled those in attendance, it left those associated with the Bulls furious after Rodman decided to skip a mandatory film session during the 1998 NBA Finals to be at the WCW event in Michigan. 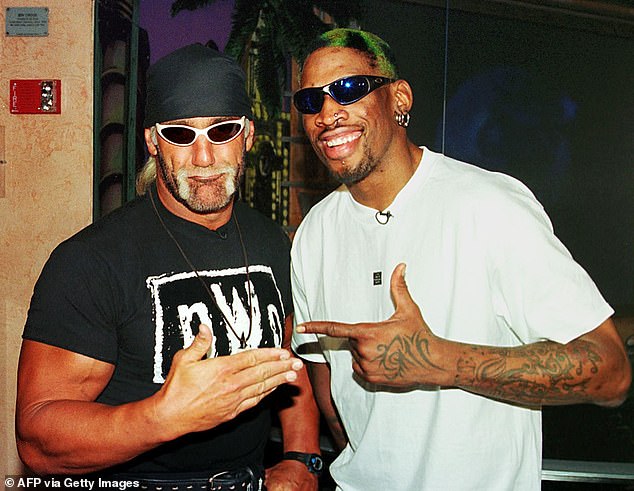 He once did a radio interview while receiving oral sex

In 2013, Rodman phoned in to a sports radio station to discuss the Miami Heat and their lack of team chemistry.

While the 6ft 7in big man gave his views on LeBron James, Dwayne Wade and Chris Bosh, listeners reportedly noticed that the Bulls legend was receiving oral sex while on the line.

He told the Jorge Sedano Show: ‘The Miami Heat right? You know what? There’s a reason that LeBron can’t accept, Dwyane Wade can’t accept, and (Chris) Bosh can’t accept the fact that you know what? I love that Michael, Scottie, and Dennis Rodman got along. They can’t get it together. That’s the main thing, they can’t get it together. Other teammates cannot adjourn to these people and that’s the main thing. If you see LeBron’s face and the way he walks on the court all the time.