Dental nurse, 45, left feeling ‘like a zombie’ after ditching steroid creams has to VACCUM her bed

A dental nurse who feels ‘like a zombie’ since ditching steroid creams has to vacuum her bed ever morning because her skin sheds throughout the night.

Laura Barnett, 45, was first prescribed the creams nine years ago, for what doctors believed was eczema – but was actually found to be an allergy to dust mites.

She threw them out 18 months ago when her skin grew resistant to their effects – but was left suffering with symptoms known as topical steroid withdrawal (TSW).

Her ‘peeling, itching and oozing’ skin made it so difficult to sleep that she would have baths at four in the morning to relieve her skin.

Stressed and anxious, Ms Barnett, of Battersea, London, feared she would lose her job because she was so tired from not sleeping.

And never did she expect it to take a toll on her relationship with partner, Matthew, 44, or keep her from spending time with her son, Beau, seven. 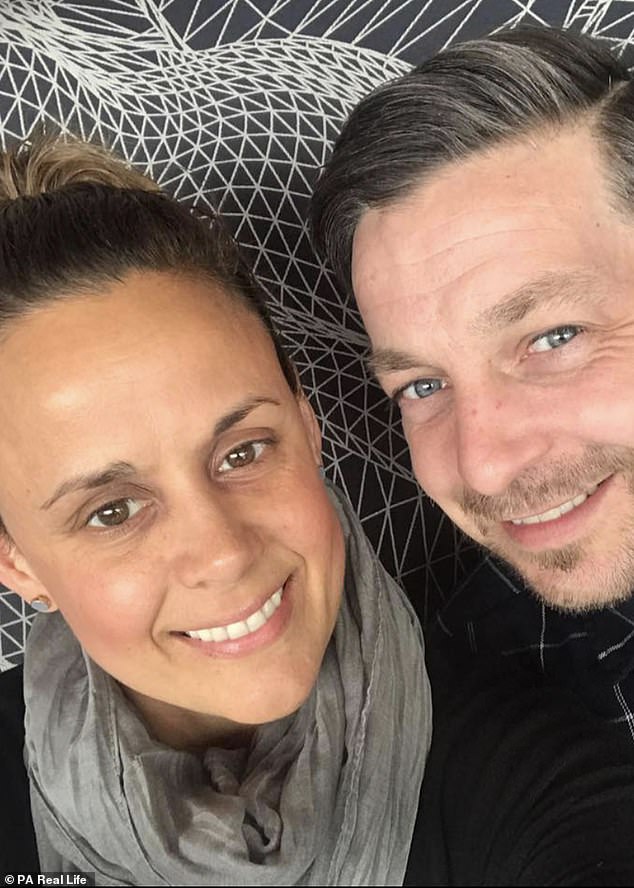 Ms Barnett said her relationship suffered as her partner, Matthew, 44, had to sleep in a separate bed because she was constantly scratching. Pictured before she ditched the creams

Ms Barnett said: ‘My partner has had to move out of our bed as he’s a very light sleeper and I was lying awake scratching all night.

‘Plus, the skin sheds and bleeds in the night so it’s horrendous. I have to vacuum my bed every morning and I don’t know any relationship that wouldn’t suffer from having to sleep apart.

‘My son has suffered because I have to spend so much time managing my TSW with regular baths that, instead of spending time with him before and after school, I am dealing with this, and his dad has had to step in.

‘I was stressed, anxious and not sleeping and so I was like a zombie at work.’

Ms Barnett was given steroid creams for the first time nine years ago to treat sore skin around her eyes.

She said doctors had mistaken her symptoms for eczema, but she found out through a dermatologist that it was an allergy to dust mites – although it is not clear when this was.

Continuing to apply it when she had flare-ups over the years, Ms Barnett was concerned she was becoming resistant to the ointments. 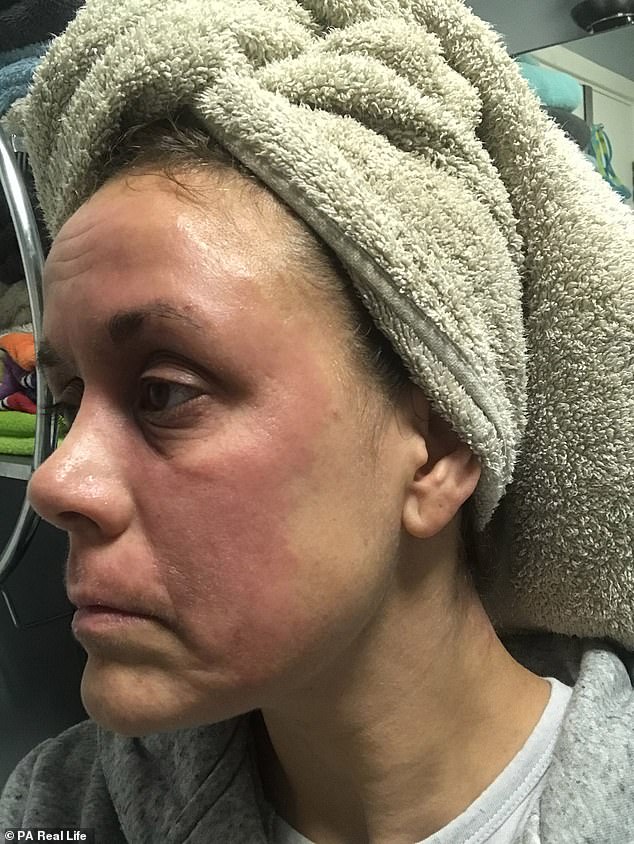 The mother-of-one said she feared she would lose her job as a dental nurse because she was ‘like a zombie’, kept up all night by constantly scratching 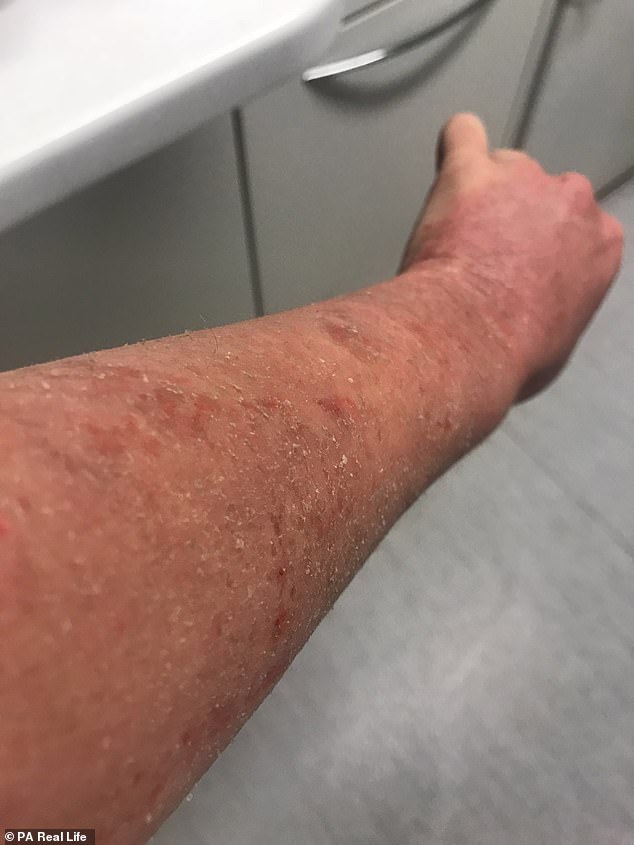 Ms Barnett said she has suffered from anxiety as a result of the changes to the skin on her face, arms, breasts and hands, which she feels not only look ugly, but are sore and hard to manage 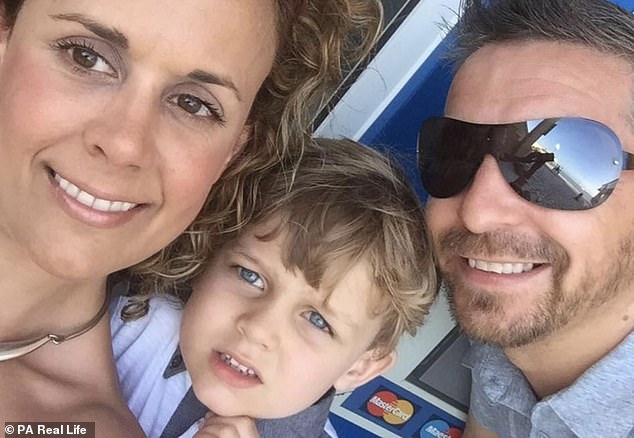 The stress of managing her TSW took a huge emotional toll on both Ms Barnett’s family and work life. Constantly bathing to relieve her skin, she was unable to spend time with her son, Beau, seven (pictured, with her partner, Matthew)

Many have called topical steroid withdrawal a fad, however, it has been recognised by the National Eczema Association since 2013.

Also known as red skin syndrome, the disorder does not have many statistics to show how common it is.

One 2003 study from Japan, found that 12 per cent of adults who were taking steroids to treat dermatitis developed RSS.

Last year, the medical journal Dermatitis published the results of a three-year study of Australian patients presenting with TSW and acknowledged that it is often dismissed as being a result of over-use of steroids, or even steroid phobia.

The British Association of Dermatologists accept that doctors still do not recognise this condition.

BAD spokesman, Dr Anton Alexandroff, said: ‘In rare circumstances, overuse of strong steroid can lead to thinning of the skin. This overuse doesn’t make the eczema worse, but it can sometimes trigger an acne-like problem, particularly on the face, which then flares up when steroids are stopped.

‘Some people refer to this as steroid withdrawal or steroid addiction, however, this isn’t something that is formally recognised by dermatologists.

‘The differing opinions come down to whether this skin reaction is caused by stopping steroid treatment, or by a flare-up of the underlying disease because the treatment has stopped suddenly. Dermatologists believe it is the latter.’

She said: ‘I didn’t know any of this at the start, but what I know now is that the longer you use steroid creams, the stronger the cream needs to be to get the same relief.

‘And when, 18 months ago, I stopped using them, within five days I started to see the withdrawal symptoms – which was something doctors never warned me about.

‘I got out of the bath one morning and the skin on my face had flared up. It was like a butterfly effect, spreading right across the middle of my face. It looked inflamed and felt very sore.

‘The irony is that, until this happened, I’d thought my skin was my best asset.’

The stress of managing her TSW took a huge emotional toll on both Ms Barnett’s relationship with Matthew, a car sales manager, her son and work life.

She said she has suffered from anxiety as a result of the changes to the skin on her face, arms, breasts and hands, which she feels not only look unsightly, but are sore and hard to manage.

She said: ‘I had just started a new job when I stopped using the steroid creams and was scared I would lose it because my symptoms were so bad, especially at night.

‘I wasn’t sleeping and so I wasn’t as focused at work as I should have been.

‘I would have to get up at 4am every night to take a lukewarm bath and try to soothe the itching, which was so bad I would scratch until the skin – which is very fragile as a result of this condition – would bleed.

‘Thankfully, when I finally told my boss what was happening, he was very understanding, but this has been hard on my partner and my son, too.’

Ms Barnett first discovered TSW when she stumbled across a Facebook group while searching her symptoms online. 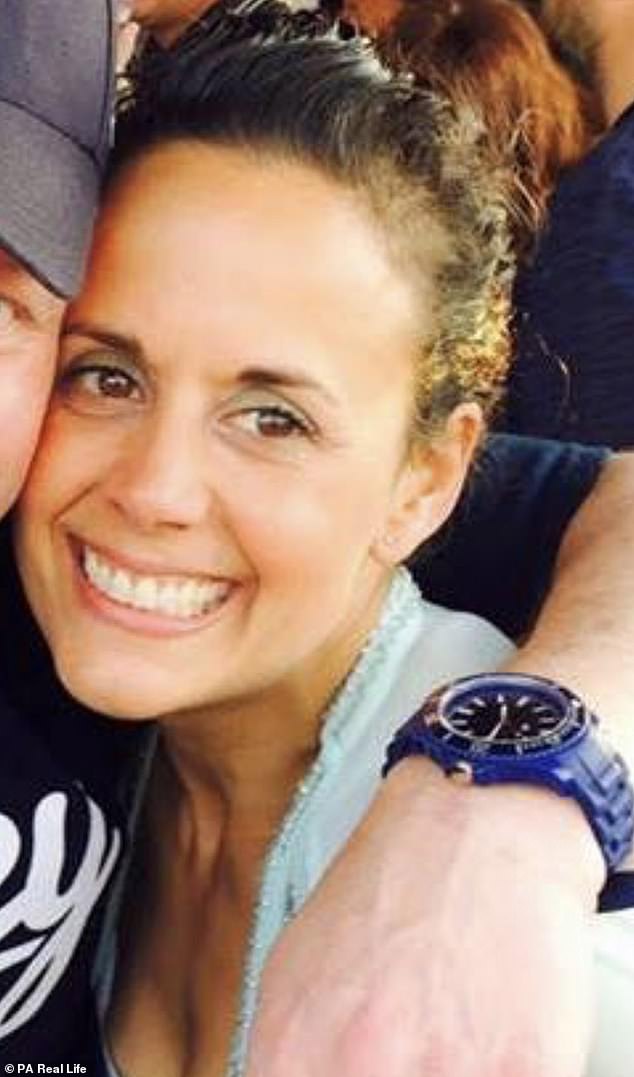 Ms Barnett said she later found out from a dermatologist that she in fact had an allergy to dust mites, but was prescribed creams for eczema for years 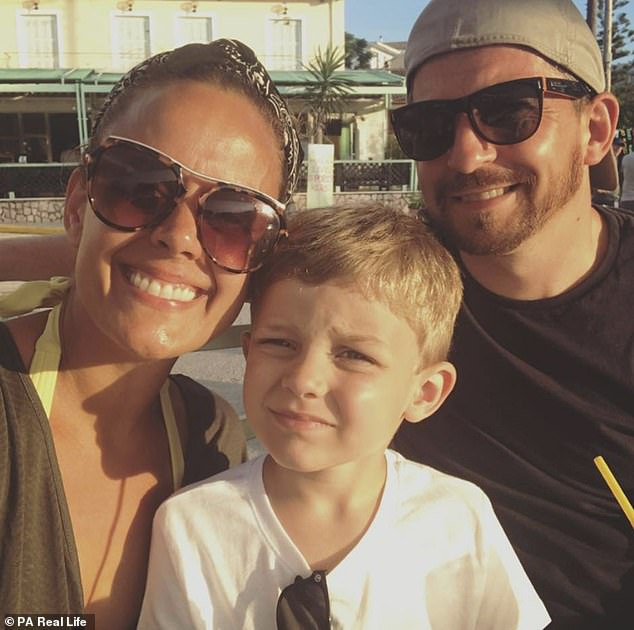 Ms Barnett, pictured with her son and partner, said her skin used to be her best asset

Despite thousands of people claiming they have it, it is not, according to Ms Barnett, properly recognised by doctors.

She said: ‘There are now 9,900 members of the online group from around the world, all posting and answering questions about this condition, so finally, I had people who understood.

‘They were the only support who could relate to me and my condition, which I have had throughout this horrible journey and I don’t know what I would have done without them.’

Ms Barnett is now managing her symptoms better, having fewer flare ups that are less severe and do not last as long.

While her journey to be rid of steroid creams has caused her suffering, she has never once been tempted to go back to using them.

She said: ‘I’d be terrified to even come into contact with a jar of those creams, because what I know now is that if you have to use them long term, they stop the skin from behaving normally and can cause steroid-induced eczema which is what I have suffered with.

‘Doctors need to see that TSW is very real. It certainly feels real when you’re suffering with it.’

It occurs when steroids have been abruptly discontinued after a prolonged or inappropriate length of administration. Women who blush easily are thought to be most at risk.

Excessive sweating and itching is a sign of recovery.  Many sufferers also develop insomnia.

Doctors should advise patients to avoid long term or high dose steroid use. Long term is considered to be one-to-two years of regular use.

Patients are also advised to cut down on steroids slowly but using a lower dose and gradually cutting back to, for example, every other day or a few times a week.