US District Court Judge R. Brooke Jackson limited the force Denver cops can use against protesters in a ruling Friday night

A Denver judge has restricted cops from using tear gas and rubber bullets on protesters, saying smashed windows and graffiti are a ‘fair trade’ to prevent demonstrators’ bones being broken and their eyesight being lost at the hands of police.

US District Court Judge R. Brooke Jackson limited the force cops can use against protesters in a ruling late Friday night, which also included ordering cops to keep their body cameras on at all times.

Jackson said the safety of demonstrators and their right to free speech is greater than the need to protect buildings during protests.

‘If a store’s windows must be broken to prevent a protester’s facial bones from being broken or eye being permanently damaged, that is more than a fair trade,’ Jackson wrote in the ruling. 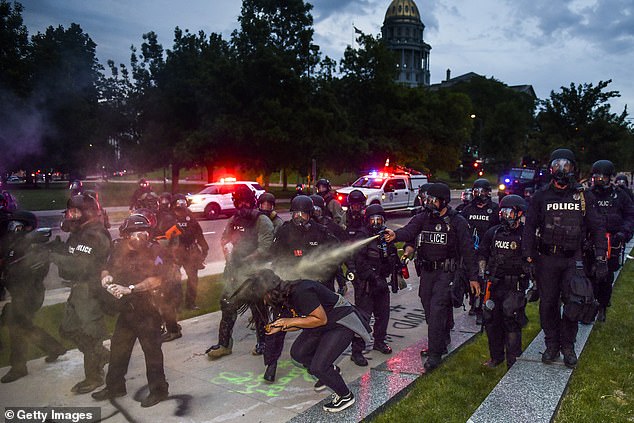 Cops pepper spray a woman next to the Colorado State Capitol last week. A Denver judge has restricted cops from using tear gas and rubber bullets on protesters, saying smashed windows and graffiti are a ‘fair trade’ to prevent demonstrators’ bones being broken and their eyesight being lost at the hands of police

‘If a building must be graffiti-ed to prevent the suppression of free speech, that is a fair trade. The threat to physical safety and free speech outweighs the threat to property.’

Jackson put in place the temporary 14-day ruling, ahead of demonstrators gathering for the tenth day in the Colorado city on Saturday.

It came after at least four protesters filed a lawsuit claiming cops used riot control tactics without warning on peaceful crowds and asking for a temporary restraining order against aggressive police actions.

The suit stated that some cops were firing randomly into crowds of peaceful protesters including deliberately aiming for people’s heads and groins.

Jackson announced the temporary ruling late Friday after hearing the suit, as he blasted the Denver Police Department saying it has ‘failed in its duty to police its own’.

He slammed the actions of a ‘minority’ of Denver cops using aggressive tactics as ‘disgusting.’

Jackson wrote that while cops have a ‘very difficult and often thankless job,’ protesters ‘have an absolute right to demonstrate and protest the actions of government officials, including police officers.’ 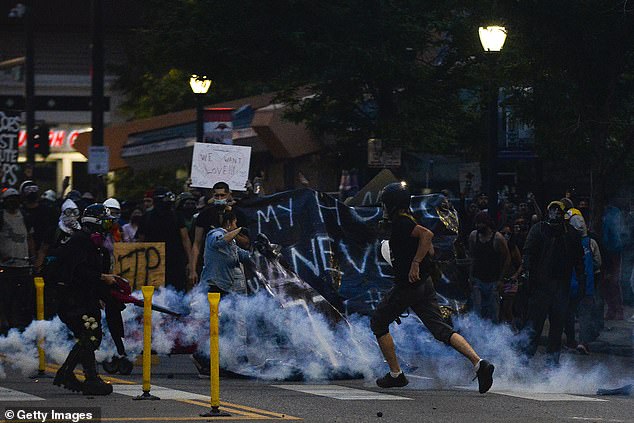 Protesters are seen running from tear gas in Denver Sunday. US District Court Judge R. Brooke Jackson limited the force cops can use against protesters in a ruling late Friday night

‘It is one of the many freedoms on which this country is built,’ he added.

Jackson ordered a number of measures with immediate effect, giving cops limited occasions when they can use force such as tear gas and rubber bullets.

These include that an officer ranked captain or higher must give permission for projectiles or chemical agents to be used and they can only do so if they have witnessed acts of violence or destruction that justify the level of force.

Chemical agents like pepper spray and tear gas cannot be used unless cops have ordered protesters to disperse and they have then refused. 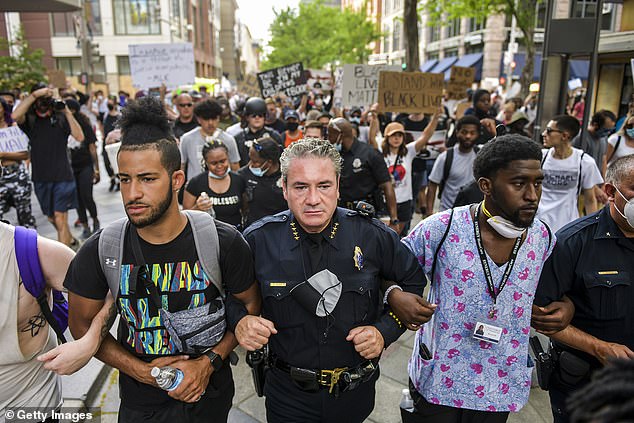 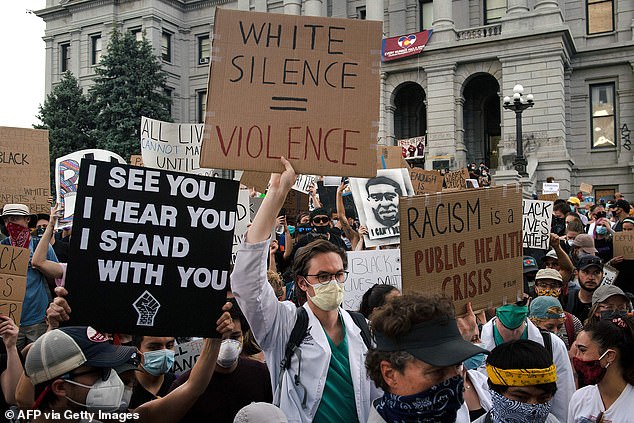 Cops must also ensure protesters have heard the orders to disperse and must repeat them if they may not have, before tear gas or pepper spray can be deployed.

Projectiles such as rubber bullets cannot be shot at peoples’ heads, pelvises or backs or fired indiscriminately into crowds.

The ruling also states cops must keep their body cameras running at all times and not block them and that no officers from outside Denver can use force in the city.

Denver police tweeted a statement saying officers would comply with the rules ‘many of which are already in line with our community-consulted use of force policy.’

Cops in Denver and all across the US have come under fire after they have been caught on camera violently attacking and detaining peaceful protesters, who have gathered demanding justice over the death of George Floyd and calling for an end to police brutality and racism.

Shocking footage has shown New York cops pushing an elderly man to the ground causing him to crack his head open, a black protester with part of his chin shot off by a rubber bullet in Denver, and cops kneeing and punching a man as he lies face down on the ground in Compton.