Depression is rising faster than any other condition jumping

Rates of depression in England are soaring and are rising faster than any other condition, official statistics suggest.

NHS data collected from GP surgeries shows 9.9 per cent of patients are now considered to be battling the mental health disorder.

In contrast, the rate was 9.1 per cent last year. It means it has overtaken obesity as the second most common recorded condition in the country.

MailOnline has sifted through the NHS Digital figures to reveal the prevalence of depression is three times higher in certain parts of the country than others.

For example, the prevalence was just 5.38 per cent in Newham in East London – compared to 15.90 per cent in Wyre Forest in Worcestershire.

MailOnline has sifted through the NHS Digital figures to reveal the prevalence of depression is three times higher in certain parts of the country than others. For example, the prevalence was just 5.38 per cent in Newham in East London – compared to 15.90 per cent in Wyre Forest

Charities are unsure whether the rise in prevalence is because more people are experiencing problems, or if people feel more able to ask for support.

The data was published in the NHS’ Quality and Outcomes Framework document, which sees GPs voluntarily give away data to provide estimates.

Hypertension remained the most prevalent condition, striking 13.9 per cent of the population – but this did not change from the previous year.

Of the 20 conditions that data is annually recorded for, 12 saw no change at all. They included rheumatoid arthritis, heart failure and stroke.

Three moved down by 0.1 percentage point, while another four increased by the same amount. Depression was the only one to have a significant jump.

In some areas of England, nearly one in six patients registered with GP practices are now recorded as having depression.

WHERE ARE THE 10 AREAS WITH THE HIGHEST PREVALENCE OF DEPRESSION?

WHERE ARE THE 10 AREAS WITH THE LOWEST PREVALENCE OF DEPRESSION? 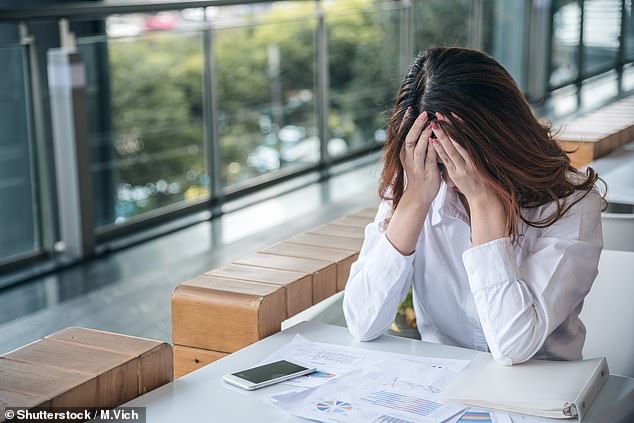 NHS data collected from GP surgeries shows 9.9 per cent of patients are now considered to be battling the mental health disorder (stock)

However, at the other end of the scale, the rate can be as low as just one in 20. The ten lowest rates are all boroughs of London.

Just five clinical commissioning groups in England recorded a reduction in prevalence of depression between 2016/17 and 2017/18.

Dr Richard Vautrey, chair of the British Medical Association’s GP committee, warned that the increase was having a ‘big impact’ on GP practices.

He argued the rising prevalence in the disorder was not being matched by community-based mental health services, GPOnline reports.

Depression can affect anyone at any age and is fairly common – approximately one in ten people are likely to experience at some point in their life.

Dr Vautrey said: ‘Rising rates of depression are having a big impact on general practice. We are at the front end of providing mental health services.

‘We heard in the budget about plans to invest £2billion for mental health services.

‘We need to see a significant proportion of that invested in community-based services linked to general practice.

‘Increasing prevalence is not being matched by a rise in availability of services such as IAPT and other services in the community.’

Dr Vautrey told the specialist publication that some patients are having to wait six months or longer to get basic services.

Chancellor Philip Hammond earlier this week promised to end the stigma of mental health that has forced ‘too many to suffer in silence’.

He announced an extra £2billion a year for specialist mental health support services in A&E units, schools and the NHS 111 helpline.

Stephen Buckley, head of information at Mind, said: ‘The most recent QOF report suggests there has been an increase in the prevalence of depression.

‘However, it’s unclear whether this is due to better awareness of the symptoms of common mental health problems among the public and GPs, or whether depression is on the rise.

‘The QOF report counts the number of patients registered with a practice who have been diagnosed with depression but doesn’t tell us how many people are accessing treatment outside of their GP surgeries.