Charlie Donovan can finally watch movies, thanks to a tiny device the zaps his depression.

That’s a big deal for the for the 59-year-old mortgage contractor. For his entire adult life, Donovan’s brain was so clouded by his mood disorder that he couldn’t focus long enough to follow a plot.

And nothing helped, until 2001, when he became one of 200 patients in the US to receive an experimental device that stimulates the vagus nerve in the hopes of bringing some relief to those with the most crushing cases of depression.

Vagus nerve stimulation (VNS) was approved as a therapy for the hardest-to-treat cases of depression back in 2005, after researchers showed that it could reduce clinical symptoms.

But the team at Washington University in St Louis wanted to go a step further and, in a new study they show that it changes not just the symptoms but the quality of life for patients like Donovan.

He can hardly remember life before depression, but he has an idea of when everything might have changed.

‘In the middle of the night, a week before Christmas, my sister and I watched our house burn down with our mother in it,’ he told Daily Mail Online.

‘I would assume that day was the beginning of depression. A tragic event like that is often a predictor of depression or mental health issues as an adult.’

For 30 years, Donovan lived in isolation.

He tried some 15 different medications, and was hospitalized twice due to depression.

Drugs might have numbed Donovan a bit, but life simply didn’t get any better.

‘It was a life of complete, utter despair and hopelessness and isolation. I really had no ability to experience pleasure,’ he recalls.

He shuttered himself away from the world, becoming afraid to leave his house.

Donovan resigned himself to this existence, until 2001 when he heard about Washington University in St Louis’s (WUSL) call for just 200 participants in clinical trial of an implanted device to treat depression.

To qualify, ‘you had to have been the worst of the worst,’ Donovan says.

‘People would say, “you’re so brave to be a study patient,” but you don’t have to be brave at all when everything else has failed and nothing is working.’

WUSL would accept just 10 patients. It was a double-blinded trial, so only five of those 10 would even have their devices turned on; the others would get an inactive placebo implant placed.

Even once he was accepted, those weren’t great odds of success, but they were about as good as Donovan thought he could hope for.

‘Just to say how low I was feeling prior to the implant, I remember that at the time of the operation, I kind of hoped I would die in surgery,’ Donovan says.

‘And that’s about as low as you can get.’

But he breezed through the surgery and a couple of days’ recovery, and left the hospital with one implant in his chest, another at the base of his neck, and no idea if they were even activated.

VNS systems were initially developed as an experimental treatment for epilepsy, but researchers noted that seizure patients with depression saw improvements for both their seizures and their moods. 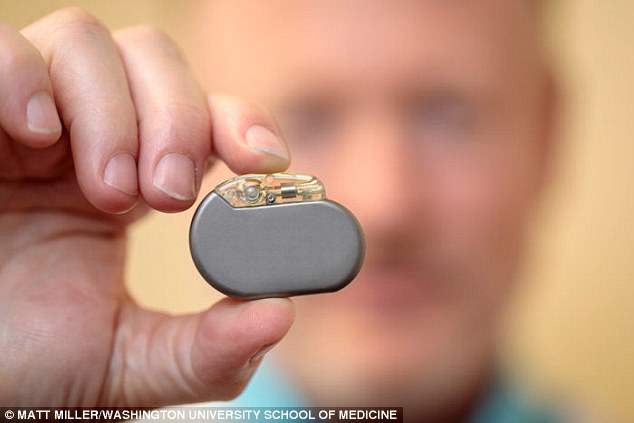 Scientists still don’t know exactly what it is about stimulating the vagus nerve that can bring relief from depression.

The word ‘vagus’ comes form the Latin for ‘wandering’ (think: vagabond). The nerve is so-called because it is the longest nerve running from the brain to the body, and it has many branches that veer off into the brain’s regions for just about everything.

Among the many communications that pass through this nerve are signals between the body and many areas of the brain that regulate the fight-of-fight response.

Much like a pacemaker, the VNS sends low-grade pulses of electricity to the nerve at regular rhythms.

Brain scans of depressed people with the device implanted show less electrical activity while their minds are at ‘rest,’ meaning the signs of neurological stress associated with depression may be reduced.

Donovan and the other 199 patients that entered the study in 2001 got devices that ‘zap’ the vagus nerve for 30 seconds every five minutes.

Some patients feel it happen, but Donovan doesn’t feel a thing (though he says he almost wishes he did sometimes).

He wasn’t sure the device was switched on and his improvements were gradual.

Then, one night before a therapy appointment, Donovan found himself laying out clothes to wear the next day: corduroy pants and a cashmere sweater from Saks.

‘Otherwise I’d been walking around in blue jeans and a tee-shirt. I wanted to look nice for the appointment,’ Donovan recalls.

‘It’s so woefully subtle to most people, but looking back I believe something was beginning to kick in.’

That was 17 years ago. Every few months, Donovan gets the device checked out, and the battery has to be changed once every five years.

He feels sadness when he confronts difficult life circumstances, but ‘it’s been a game-changer,’ Donovan says.

Since the first trial in 2001, nearly 600 patients have been enrolled.

WUSL’s latest study found that the stimulator improved quality of life for patients according to to 10 out of 14 clinical measures.

And many whose depression scores fell by only 34 or 40 percent reported they ‘felt’ like their lives had improved more dramatically, on par with the 50 percent reduction in symptoms considered clinically ‘better.’

‘When you’re in utter despair, even a 40 percent improvement is wonderful. When everything else has failed and you get a 50 percent decrease in symptoms and improvement in quality of lie, that’s enormous,’ Donovan says.

And he hopes that this study’s findings will make that improvement more accessible to more people.

Getting a VNS costs about $50,000. After the FDA approved the device in 2005, Medicare initially covered it, but then changed its mind.

That decision is apparently under review, and this study’s findings could help tip the scales, but for now, the VNS remains utterly out of reach for most patients.

‘Imagine how frustrating that is: if you are a sufferer or have a loved one that is, there’s this novel therapy out there that can work, and is approved, but you can’t get it,’ Donovan says.