Depression rates in Britain have doubled since the Covid-19 pandemic, government research has revealed.

The Office for National Statistics (ONS) found 9.7 per cent of adults had some sort of depression between July last year and this March.

But when the same group of people was assessed again in June, the figure had risen to 19.2 per cent — almost one in five.

The data, released today, showed young women were affected most by the virus and the government’s coronavirus-controlling lockdown.

Top experts said the findings were ‘deeply troubling’ because they come before the damaging impact of the Covid-19 induced recession. And they warned of a looming ‘mental health crisis’.

Data from the Office for National Statistics showed that nearly one in 10 (9.7 per cent) British adults suffered some sort of depression between July 2019 and March 2020. But when the same group was assessed again in June, the figure had risen to 19.2 per cent – nearly one in five 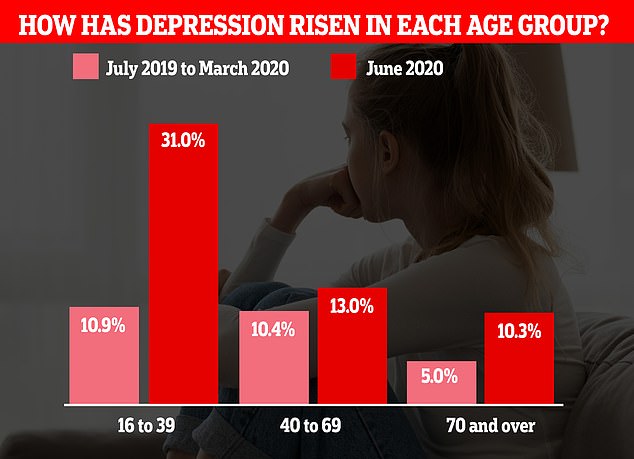 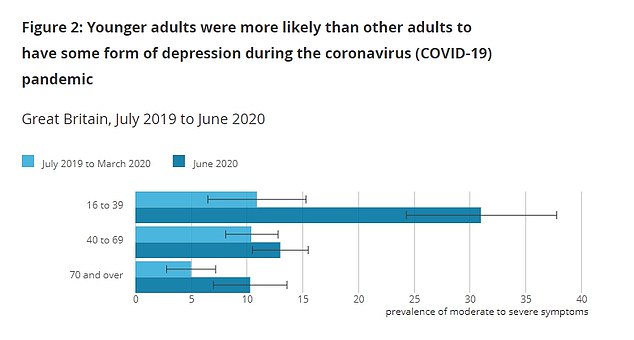 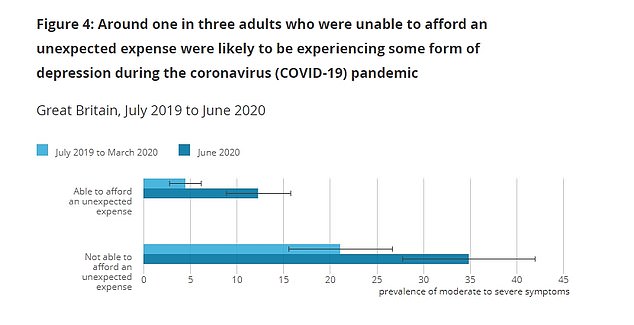 The ONS research examined answers from the same 3,500 British adults both before and during the pandemic.

Depressive symptoms include low mood, as well as a loss of interest and enjoyment in ordinary things.

Researchers also examined the levels of depression — which are classified as mild, moderate or severe.

One in eight adults developed moderate to severe depressive symptoms during the pandemic, while the others were already affected.

Eighty-four per cent of people experiencing some sort of depression cited stress and anxiety affecting their wellbeing.

And 42 per cent said their relationships had been affected.

Of those experiencing moderate to severe depressive symptoms in the pandemic, 62 per cent said they felt lonely ‘often or always’. 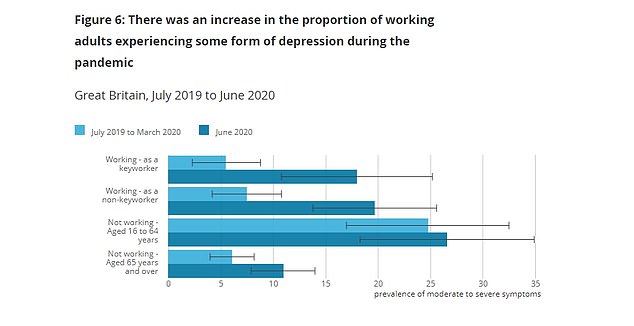 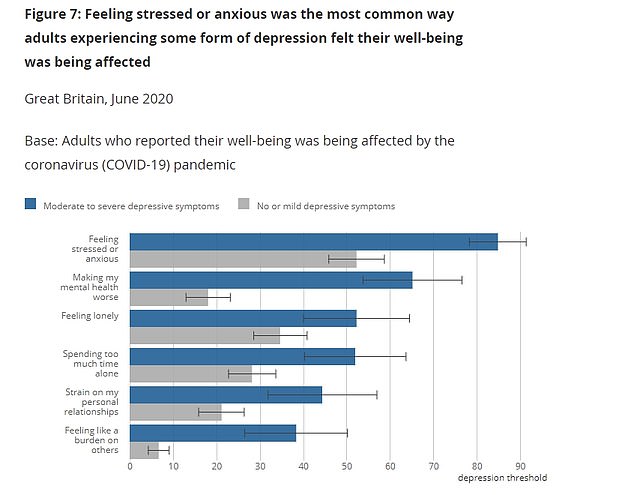 YOUNG WOMEN ARE MOST LIKELY TO SUFFER LOCKDOWN-INDUCED DEPRESSION

Today’s findings from ONS come not long after a study by University College London found young women are most likely to suffer from lockdown-induced depression, anxiety and loneliness.

Participants, a total of 18,000, were part of four different surveys which had interviewed them since childhood. The most recent was in May, three months into lockdown.

Ill mental health was most common in the youngest group – 19 year olds. Just over one third of women and just under one quarter of men had symptoms of depression.

Just under half and both 19-year-old men and women felt lonely during the same time.

The researchers analysed the lockdown survey alongside a similar one done by the same participants five years ago.

Women of 30 years old saw the sharpest decline in mental health over this period of time.

Researchers found a ‘significant increase’ in levels of poor mental health during lockdown compared to when this group was last surveyed, at age 25.

This was only compared to those aged 50 and 62, because the 19 year-olds were not surveyed at the age of 14.

The study’s co-author, Professor Emla Fitzsimons, said the change in mental health among 30 years olds could naturally occur and not be a result of Covid-19.

She said: ‘This change in mental health between age 25 and 30 will reflect change that may naturally occur at this stage of life, as well as change attributable to the pandemic.

‘However this finding chimes with other studies which have also shown that young women have experienced the largest increase in mental health problems due to Covid-19.’

In comparison, the rate was four times lower (15 per cent) for those with no or mild depressive symptoms.

Just 3.5 per cent of Britons saw an improvement in their symptoms during the same period, according to the data.

Tim Vizard, from the ONS, said: ‘Today’s research provides an insight into the mental health of adults during the coronavirus pandemic.

‘Revisiting this same group of adults before and during the pandemic provides a unique insight into how their symptoms of depression have changed over time.

‘Nearly one in five adults were experiencing some form of depression during the pandemic, almost doubling from around one in 10 before.

‘Adults who are young, female, unable to afford an unexpected expense or disabled were the most likely to experience some form of depression during the pandemic.’

Guy Goodwin, an emeritus professor of psychiatry at Oxford University, said the findings were ‘not surprising and widely anticipated’.

‘These findings confirm that social factors adversely affected by the pandemic are in turn associated with increased levels of anxiety and depression in the UK population,’ he said.

The Covid-19 pandemic has caused emotions to run high across the British population.

Lockdown has brought social isolation to many, and worries about job security, housing and finances.

The economic effects are expected to continue long-term due to the recession, which psychiatrists fear will cause a mental health crisis.

‘This study tells us, yet again, that we might have a mental health crisis after this pandemic,’ said Professor Dame Til Wykes, clinical psychology and rehabilitation at the Institute of Psychiatry Psychology & Neuroscience, King’s College London (IoPPN).

She added: ‘The social effects of distancing and isolation for some affects their emotional wellbeing.

‘We can all understand that dealing with tough circumstances like financial stress and unemployment, as well as the fear produced by having an underlying health condition, are likely to put pressure on all our coping mechanisms.

‘We don’t know when this pandemic will be over but the news about employment seems likely to put further strain on an already stressed population. The figures for depression are then likely to be much worse.’

Sir Simon Wessely, a regius professor of psychiatry, Institute of Psychiatry Psychology & Neuroscience, King’s College London (IoPPN), said: ‘It is clear that it is younger rather than older people who are most affected. And this is before the predicted recession bites, when we can expect things to get even worse.

‘This is deeply troubling. We should not simply accept this as “new norm”. It is new but anything but normal.’

The findings today come not long after a study by University College London found young women are most likely to suffer from lockdown-induced depression, anxiety and loneliness. 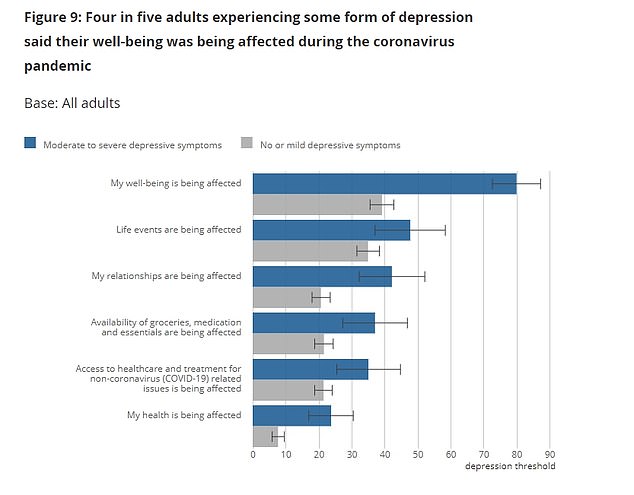