Coronavirus must be taken very seriously again or the UK will face ‘a bumpy ride over the next few months’, a deputy chief medical officer has warned after a ‘big change’ in infections.

Professor Jonathan Van-Tam said on Monday that the public had ‘relaxed too much’ over the summer and described the rising number of cases as of ‘great concern’, despite the Health Secretary insisting it was not out of control.

The deputy chief medical officer for England issued the warning as Caerphilly in south Wales prepared to be placed under local lockdown and stricter measures were extended in Scotland.

There were a further 2,948 lab-confirmed cases of coronavirus in the UK as of 9am on Monday, following the 2,988 reported on Sunday, which was the largest daily figure since May.

In an interview with journalists, Prof Van-Tam said: ‘This is a big change. It’s now consistent over two days and it’s of great concern at this point.

‘We’ve been able to relax a bit over the summer, the disease levels have been really quite low in the UK through the summer but these latest figures really show us that much as people might like to say ‘oh well it’s gone away’ – this hasn’t gone away.

‘And if we’re not careful, if we don’t take this incredibly seriously from this point in we’re going to have a bumpy ride over the next few months.’

He said that the rise is ‘much more marked’ in the 17-21 age group, but noted there is a ‘more general and creeping geographic trend’ across the UK.

‘People have relaxed too much,’ Prof Van-Tam said. ‘Now is the time for us to re-engage and realise that this is a continuing threat to us.’

He urged politicians and public health officials to think how to manage the crisis not in the short term but through ‘the next six months and how we get through this until the spring’.

The professor added that it was ‘clear’ that the level of compliance with restrictions ‘is very variable indeed’.

Asked by LBC presenter Nick Ferrari if the UK had ‘lost control’, as suggested by some experts, Mr Hancock said: ‘No, but the whole country needs to follow social distancing.’

Professor John Edmunds, who is part of the Government’s Scientific Advisory Group for Emergencies, warned that cases were ‘increasing exponentially’.

He said the UK has entered ‘a risky period’ with the average number of people an infected individual spreads the virus to, known as the reproduction number, potentially above the crucial figure of one. 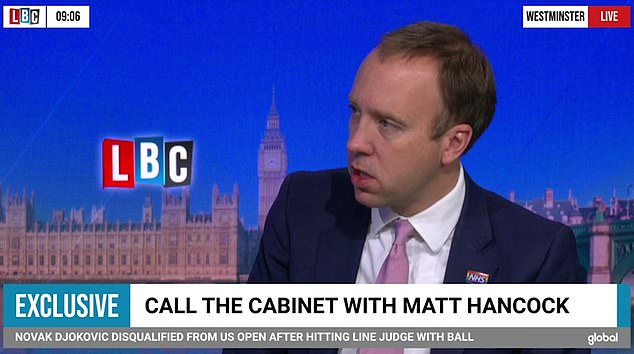 Health Secretary Mr Hancock tempered fears today and said cases were not out of control, while admitting cases were ‘concerning’ because ‘nobody wants a second wave’. He is pictured during the interview on LBC radio 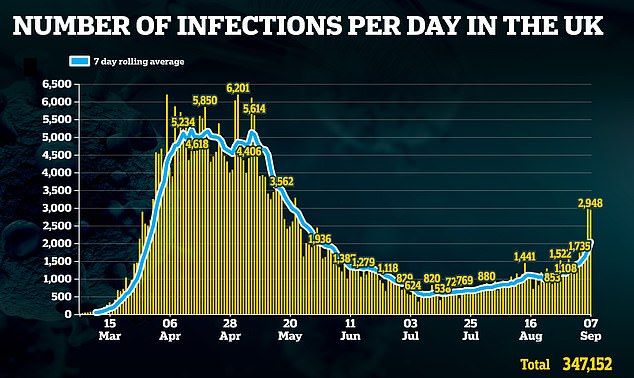 ‘I didn’t want us to relax measures so much that we couldn’t open the schools safely without it tipping the reproduction number significantly above one. And we are already above one and we’ve opened schools,’ he told ITV News.

As the UK continued attempts to quell regional outbreaks, people were told they cannot enter or leave Caerphilly without a reasonable excuse when new restrictions are imposed at 6pm on Tuesday.

Meetings with other people indoors will be banned and everyone over 11 will have to wear masks in shops, the first time the measure has been made mandatory in Wales.

The South Wales borough has seen 133 new Covid-19 cases over the past seven days, equivalent to a rate of 55.4 cases per 100,000 population, giving it one of the highest rates in the UK.

Meanwhile, restrictions on household visits across western parts of Scotland were extended for a further week and expanded to also include East Dunbartonshire and Renfrewshire.

The total of nearly 3,000 new cases across Britain was similar to the figure seen on Sunday, suggesting the ‘concerning’ high was not a one-off.

Britain has confirmed almost 3,000 new cases of coronavirus for the second day in a row, suggesting yesterday’s ‘concerning’ high was not a one-off.

The surge in positive tests over the weekend has pushed the UK’s national infection rate to 21.3 per 100,000 for the past week. Once infections rise above 20 in 100,000 in other countries, the British Government begins seriously considering enforcing a quarantine period for holidaymakers returning from abroad.

It comes as Britain is today bringing in new rules dictating that people returning, from Wednesday, from seven islands in Greece – Lesvos, Tinos, Serifos, Mykonos, Crete, Santorini and Zakynthos (Zante) – will have to self-isolate for two weeks.

The surge in the past two days has also pushed the daily average to higher than 2,000 for the past week – to 2,032 – for the first time since May. 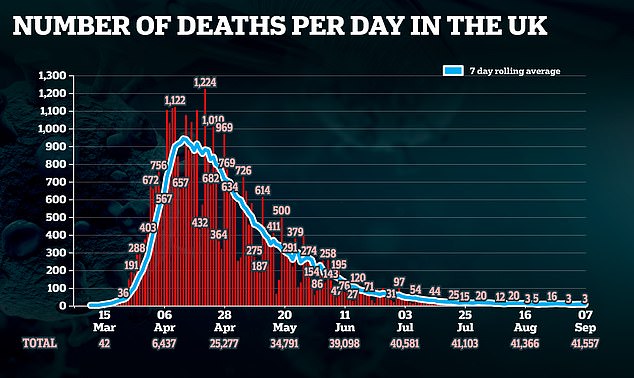 Officials yesterday reported three more Covid-19 deaths, taking the total to 41,554. These are thought to all be in England, considering health agencies in Wales, Scotland and Northern Ireland each reported zero deaths themselves.

The North and Midlands are seeing considerable hikes in cases, with Bolton, Leeds, Birmingham and Manchester seeing infection rates reaching levels seen in April – the peak of the crisis – May and June.

A group of council leaders in the North East have pleaded with people to stop having house parties because is it the ‘most dangerous’ thing to do amid the pandemic, while saying ‘selfish and reckless’ individuals were going out and meeting others before their test result had even returned.

Even though case numbers are high, the percentage of people testing positive for the disease is still dramatically lower than it was at the peak of the crisis. For this reason, experts say figures should not be compared to the height of the outbreak because so many more tests are being done now in comparison.

When the disease was out of control in March and April, rationed testing meant that at times more than 40 per cent of test results were positive, but this has since plummeted to just 2.3 per cent in the community and 0.5 per cent in hospitals.

Still, Mr Hancock pleaded with young people specifically, who make up the majority of new cases, to adhere to social distancing to avoid spreading the coronavirus to more at-risk groups. He warned: ‘Don’t kill your gran by catching coronavirus and then passing it on.’

Downing Street warned the ‘concerning’ number of cases would generally be expected to lead to a rise across the population as a whole.

The evidence may already be emerging in Scotland; First Minister Nicola Sturgeon said there is a ‘warning’ in the rise in Covid-19 hospital admissions – a possible indication cases are spreading to vulnerable people.

It comes as swathes of Britons headed back to work on Monday with traffic and public transport returning to pre-Covid levels.