A chief Constable whose force controversially used drones to spy on walkers during lockdown is retiring after a police watchdog probe into his personal conduct.

Peter Goodman was referred to the Independent Office for Police Conduct days after the ‘stay at home’ restrictions were introduced.

The complaint related to an off-duty personal conduct matter. The IOPC carried out an investigation but ruled there was no breach of professional standards.

Mr Goodman, 53, announced his retirement from Derbyshire Constabulary just days later on May 6. The divorced father of three will leave the force at the end of July, almost two years before his original five-year contract was due to expire.

An IOPC spokesman would not reveal what the complaint against the county’s top officer was about.

They added: ‘Following a referral from the Office of the Police and Crime Commissioner (PCC) for Derbyshire, we looked into a potential off-duty conduct matter concerning the Chief Constable.

‘Having assessed the available evidence we considered that there was no indication of any breach of professional standards, and consulted with the PCC who agreed with our assessment. We have since advised the PCC and chief constable that our inquiries have ended.’

Derbyshire Constabulary has been behind a series of controversial actions during lockdown.

Its drone unit filmed walkers in the Peak District on March 26, three days after restrictions began. 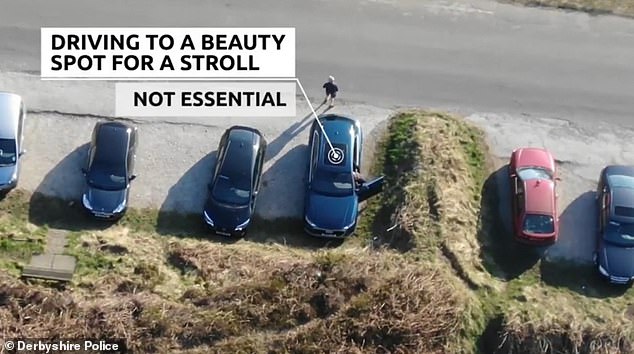 It claimed the footage showed the stay at home message which was then in force was ‘still not getting through’. Officers also put black dye in the Blue Lagoon, near Buxton, to deter swimming.

Former Supreme Court justice Lord Sumption likened Derbyshire’s activities to a ‘police state’. He said at the time: ‘The behaviour of Derbyshire police in trying to shame people into using their undoubted right to travel to take exercise in the country and wrecking beauty spots in the fells so people don’t want to go there is frankly disgraceful.

‘This is what a police state is like. It’s a state in which the government can issue orders or express preferences with no legal authority and the police will enforce ministers’ wishes. Derbyshire Police have shamed our policing traditions.’

Hardyal Dhindsa, Police and Crime Commissioner for Derbyshire, said: ‘Under the current regulations, I was required to refer a possible conduct matter relating to the Chief Constable to the IOPC.

‘Following a swift investigation, they found that there was no indication of any breach of professional conduct. The matter is therefore closed, and I have nothing further to say at this time.’

Derbyshire police insisted Mr Goodman’s decision to retire was not related to the watchdog investigation.

A spokesman added: ‘Any concerns that are raised over the conduct of the Chief Constable are dealt with by the Police and Crime Commissioner who employs him and not the constabulary. These are then referred to the IOPC.

‘Unless there are matters of public concern Chief Constable Goodman’s personal life is just that. No allegations were made against him.

‘Chief Constable Goodman’s initial notification to retire was given at the beginning of March.

‘A decision was then made to stay to deal with the immediate issues relating to the Covid crisis. The decision to retire was not in any way related to this.’