A group of thugs has been slammed as ‘cruel’ and ‘vile scum of the earth’ after abusing a kitten by binding her stomach and paws with cable ties and duct tape.

The animal was rescued by a passerby in woodland, and was about to be used to bait ferrets and dogs.

The Derbyshire police wildlife crime team is seeking information after the small kitten, a tortoiseshell, after she was saved by a concerned passing member of the public.

The poor kitten was found with its middle bound with sticky duct tape, normally used in construction and for DIY projects 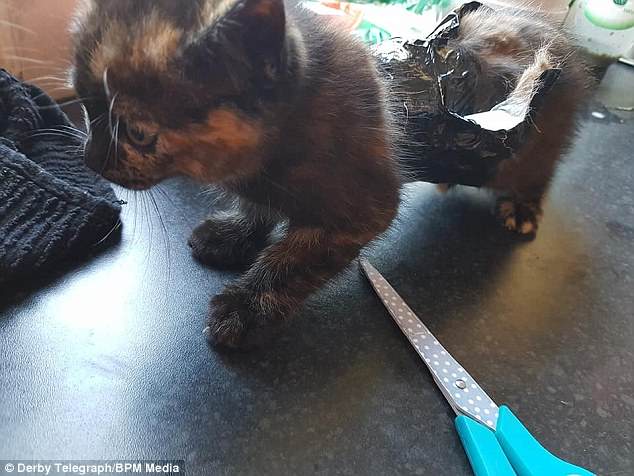 After she was rescued, the kitten had the tape removed from her stomach. She has since been re-homed 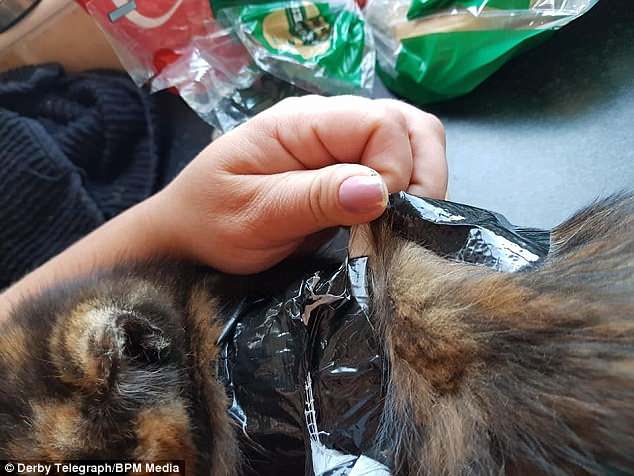 The wildlife officer said that among the group abusing the animal was one man with a swallow tattoo on his neck, while the remainder had tattoos on their hands 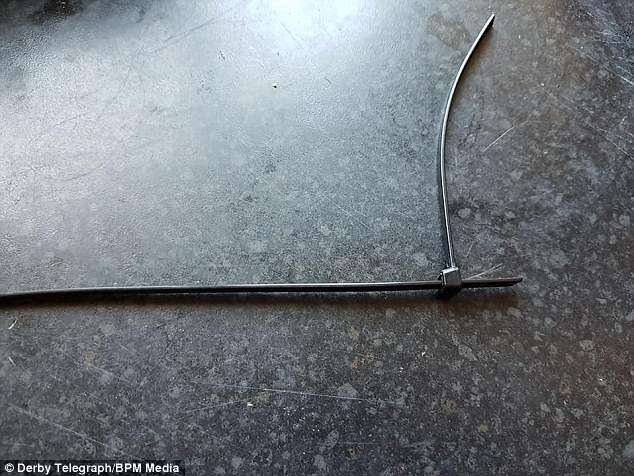 The feline was also found with its paws bound with cable ties, to prevent it from moving

Appealing for help via Facebook, the wildlife officer asked for help to track down ‘four or five men who had a small kitten which had its feet bound with cable ties and its body bound with masking-type tape.

‘These males also had with them a number of ferrets and dogs.’

‘This small kitten was clearly destined to be used as some kind of bait for the ferrets and dogs.’

The wildlife officer said that among the group abusing the animal was one man with a swallow tattoo on his neck, while the remainder had tattoos on their hands.

All were described as wearing tracksuits, and were believed to be aged in their 20s or 30s.

The kitten was rescued from woodland between Unstone Green, a village in Chesterfield, and the A61 at the Sheepbridge Industrial estate, and is now ‘safe and well’, officers said.

Derbyshire Live reports that she is living with a new owner – the person who found and rescued the feline – and is now caring for her.

People responding to the wildlife team’s appeal on Facebook have written of their outrage at the ‘pieces of scum’ who abused the kitten.

One woman posted: ‘Such evil people. They are callous thugs. Thank heaven somebody cared enough to save the little one.’