Derek Hough remains fierce in everything he does.

The 32-year-old dance pro on Thursday was snapped in Toronto, Canada at the Air Canada Arena in a wheelchair, as he played adaptive rugby as part of the 2017 Invictus Games.

The Invictus Games are the athletic competition Prince Harry spearheaded ‘for injured, ill and wounded servicemen and women and veterans,’ according to the organization.

On point: Derek Hough, 32, was focused as he took part in the 2017 Invictus Games in Toronto, Canada on Thursday in a wheelchair, playing adaptive rugby at the Air Canada Arena

The dapper Dancing with the Stars alum wore a maroon jersey with white trim and collar, sporting neatly-kept facial hair with his dark blonde locks combed and styled.

The redheaded royal Prince Harry was also on hand Thursday at the event, looking happy while taking in the inspirational competition he organized.

The 5ft10 entertainer Hough later took to Instagram, calling Thursday’s outing ‘a truly humbling experience,’ and adding that ‘getting to play along side these amazing servicemen and women was such an honor.’

The World of Dance hunk, the older brother of actress/dancer Julianne Hough, shared a touching anecdote about a chat he had prior to taking part in the spirited competition. 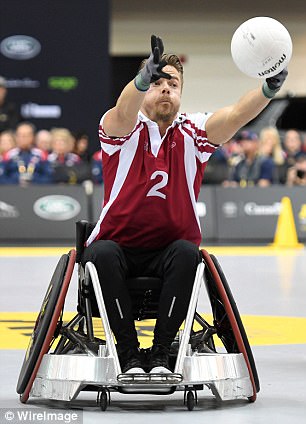 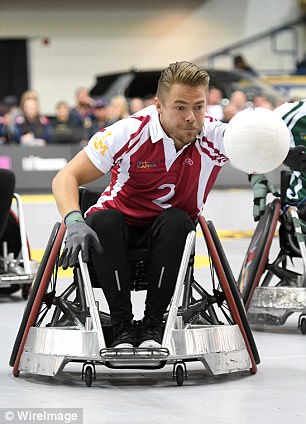 All-out: The multi-talented entertainer brought his best effort to the arena 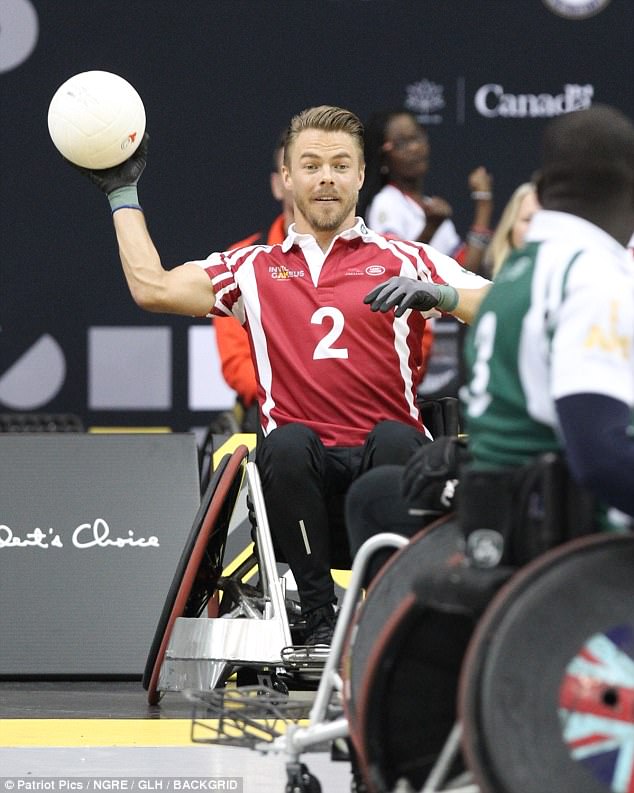 In shape: The fit dancer’s strong arm was on display as he reared back with the ball

‘Speaking with the mother of one of the athletes last night, she said with tears in her eyes, “Adaptive Sports Saves lives,”‘ Derek revealed. ‘I truly believe events like these give our country’s heroes an opportunity to showcase their astonishing abilities and unconquerable spirit.’

The Salt Lake City native added that he’s in his ‘second year being a part of these incredible games,’ and plans ‘on making it an annual event.’

Hough chat with Entertainment Tonight earlier this week, on the heels of his sister Julianne nabbing a major role in the upcoming bodybuilding film Bigger, from filmmaker George Gallo. 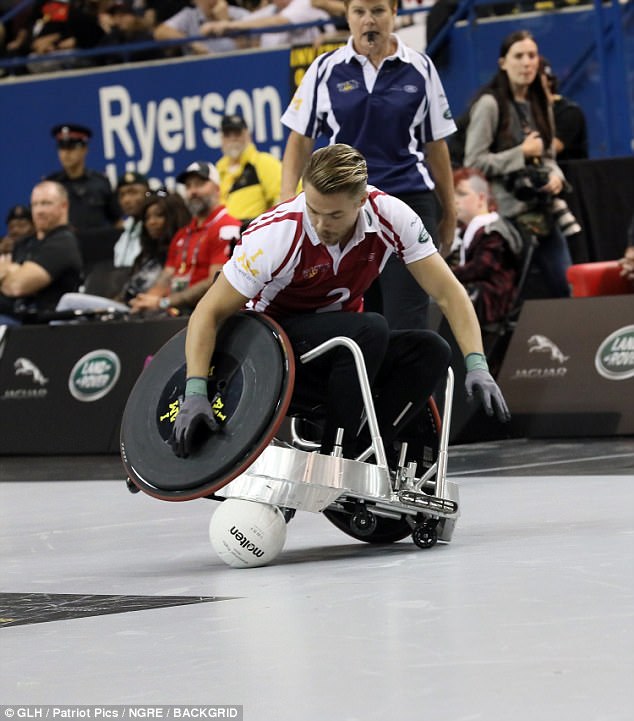 Jammed: The ball was lodged under Hough’s wheelchair, putting him off-balance 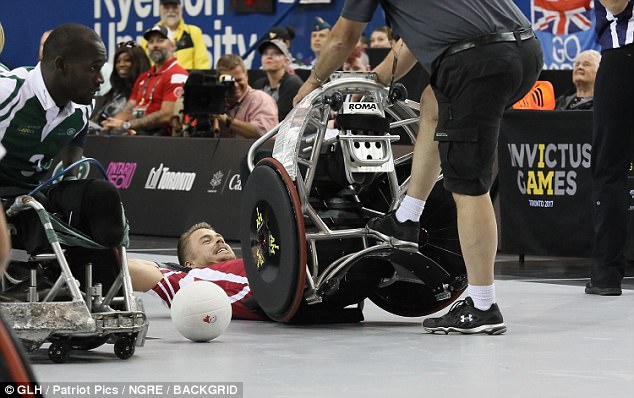 Malfunction: Hough had a good attitude as he fell on his back while in the chair 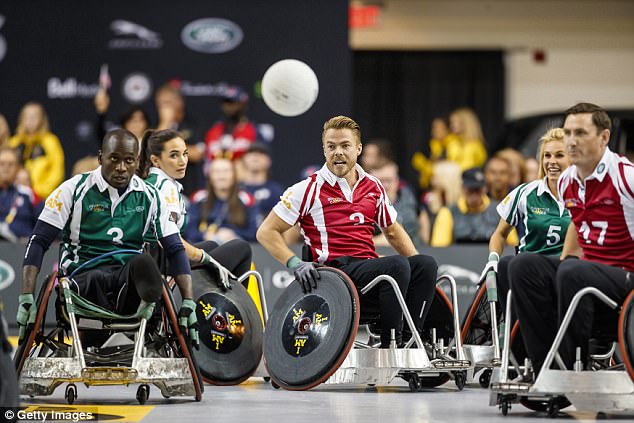 Go for it: The athletes were focused with the ball in the air in the aggressive competition

Julianne, who tied the knot with hockey player Brooks Laich in July, has been pumping up in preparation for the part, according to her brother.

‘I will say this, she has definitely been training and getting in shape for it,’ he said, adding that Julianne’s ‘gotta be pretty ripped’ to play the fitness pioneer Betty Weider.

‘She was just telling me, she’s trying to get that “honeymoon weight” off,’ Derek said. ‘Not like there’s really much to get off; I mean, have you seen her honeymoon photos? She has, like, an eight-pack going on. What is that? Just crazy.’ 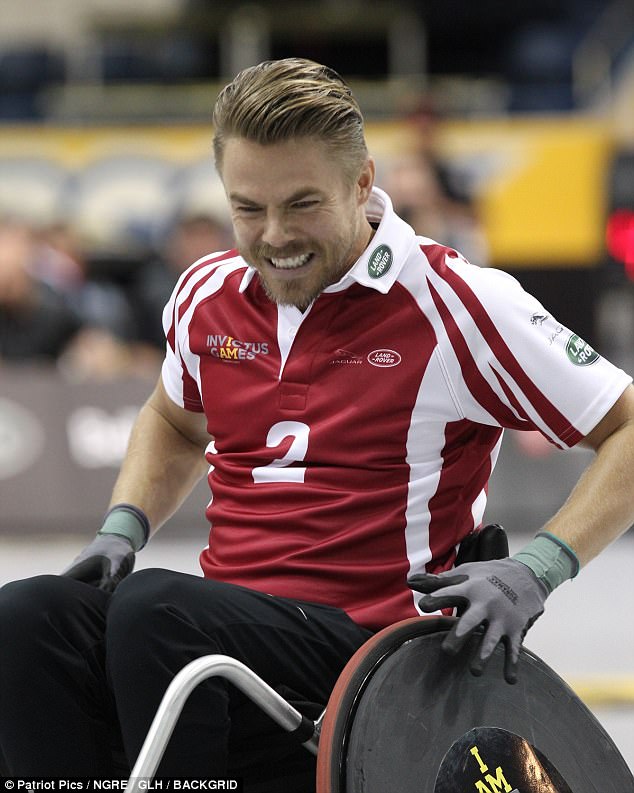 Gritty: Hough showed off not just his athleticism, but his heart during Thursday’s match 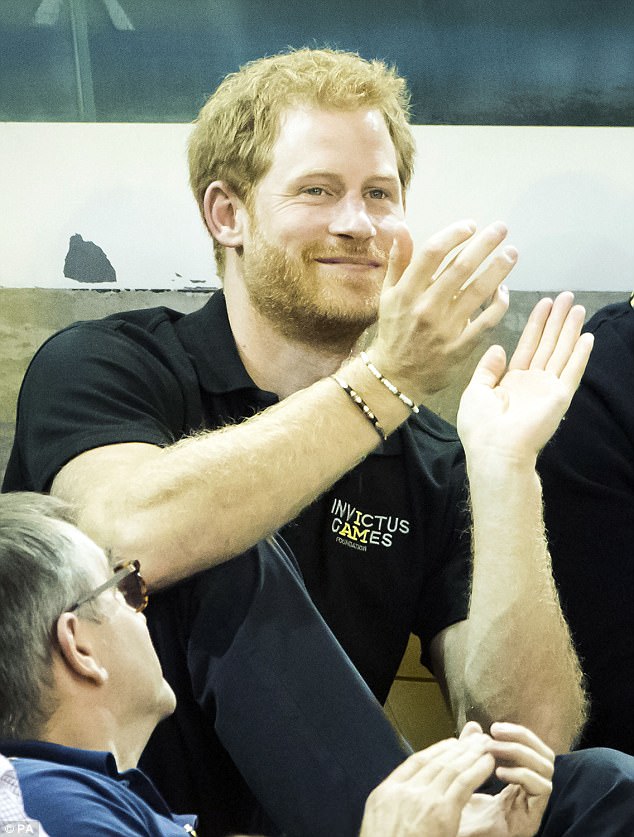 Royal presence: Prince Harry applauded the efforts as he watched from the stands 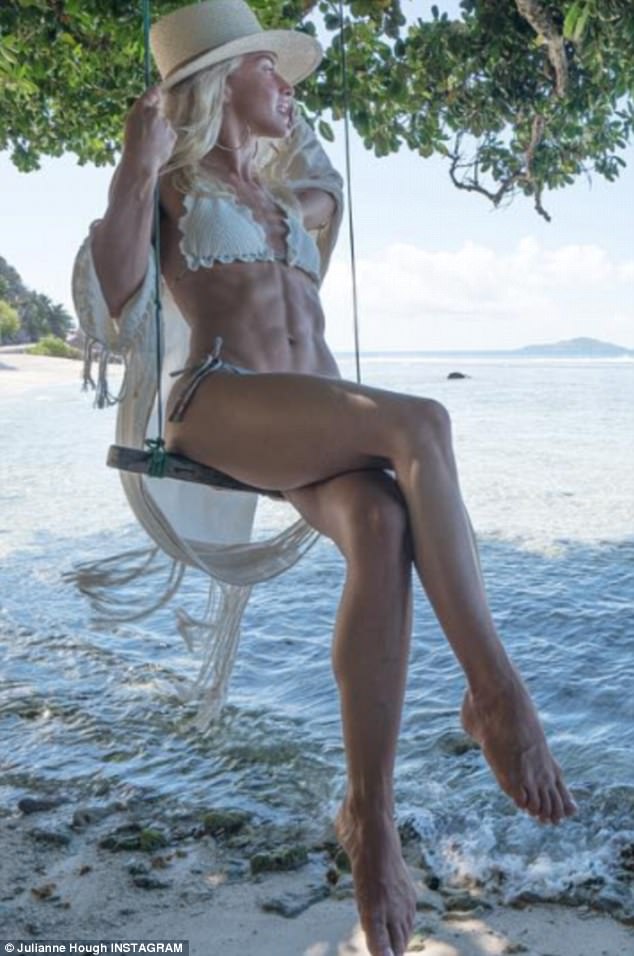 Abs-olutely stunning: Derek said his sister Julianne Hough (seen above, in July) is continuing to get ‘pretty ripped’ to play the fitness pioneer Betty Weider in the upcoming fitness film Bigger