Dermot O’Leary could not be more relaxed. He is leaning back into a squashy leather sofa in a London studio, shooting the breeze about everything from Spice Girl Mel B’s saucy remarks on his famously tight trousers to a book he’s just read on Brexit. In front of him is a slab of chocolate cake from his wife’s 40th birthday he’s brought along to share.

His manner is one of easy bonhomie, as befits the man whose job on The X Factor is not only to deal with the super-egos of the celebrity judges but also the often broken spirits of the contestants. There is nothing flashy in his dress or manner. He chats to everyone in the room. He doesn’t appear to take himself seriously, as he elaborates on the subject of Mel B: ‘She never fails to mention my nether regions whenever she sees me,’ he says. ‘It’s her opening gambit.’

She’s not the only one, I point out. O’Leary – who hosts the National Television Awards on Tuesday for the tenth time – regularly tops the ‘sexiest male on TV polls’, beating the likes of Benedict Cumberbatch and Brian Cox. ‘But the tight trousers have gone now,’ he says, as he stands up to show us. ‘My new trouser style is a relaxed fit. It’s the way forward.’

Tight trousers aside, he is the man least likely to have his head turned by a Spice Girl. His wife is Norwegian TV director Dee Koppang, who’s recently been working on The Crown. She is clearly his equal both intellectually and professionally, and the couple have homes in London and Italy. ‘We keep each other sane,’ he says. ‘And we share opinions on work. She’s very smart.’ 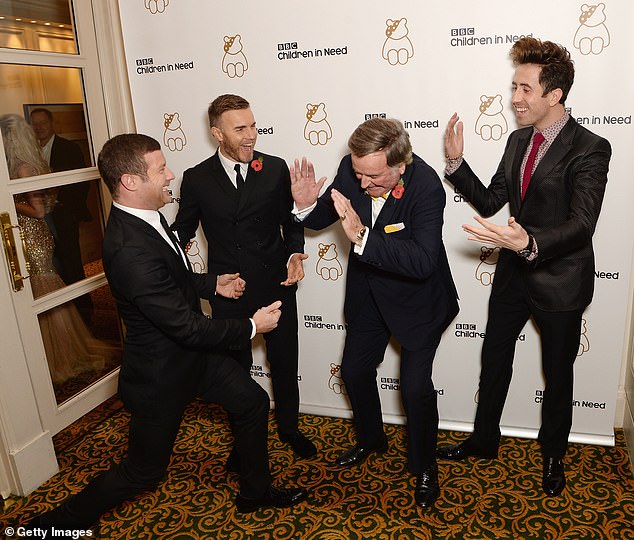 ‘Terry Wogan patted me on my head. It was like being touched by God’. Above: O’Leary with Gary Barlow, Nick Grimshaw and Terry Wogan

O’Leary is cut from the same cloth. And it would be a mistake to believe he doesn’t take himself seriously. He’s just finished Unleashing Demons by Craig Oliver, David Cameron’s former communications director, a book choice that hints at the brains behind that easy charm, and he knows his value in the cut-throat world of entertainment. He proved that four years ago by quitting the show that made his name. The mistakes and awkward links that came with his X Factor replacements Caroline Flack and Olly Murs made everyone – in particular the heads of ITV – realise how good O’Leary was at his job.

O’Leary admits it took guts to resign from the show. ‘When you sign on to The X Factor it takes nine months of your year. But at the end of every series you were left not knowing if your contract was going to be renewed. I remember being in Austin, Texas, and still not having heard whether I was going to be doing The X Factor, which would have started in a matter of weeks. I made a call to ITV and was told I might be doing it, but I might not.

‘I’d done eight years there very successfully and I thought, I’m not playing these games any more. So I called ITV and told them to count me out. Saying “No” was the only power I had. The following day I thought, “Holy s***!”, but I decided to do all the things I’d planned but never had the time for.

‘I had an idea for a documentary, I had a couple of ideas for children’s books I wanted to write, and I wanted to show myself I could live without The X Factor.’ 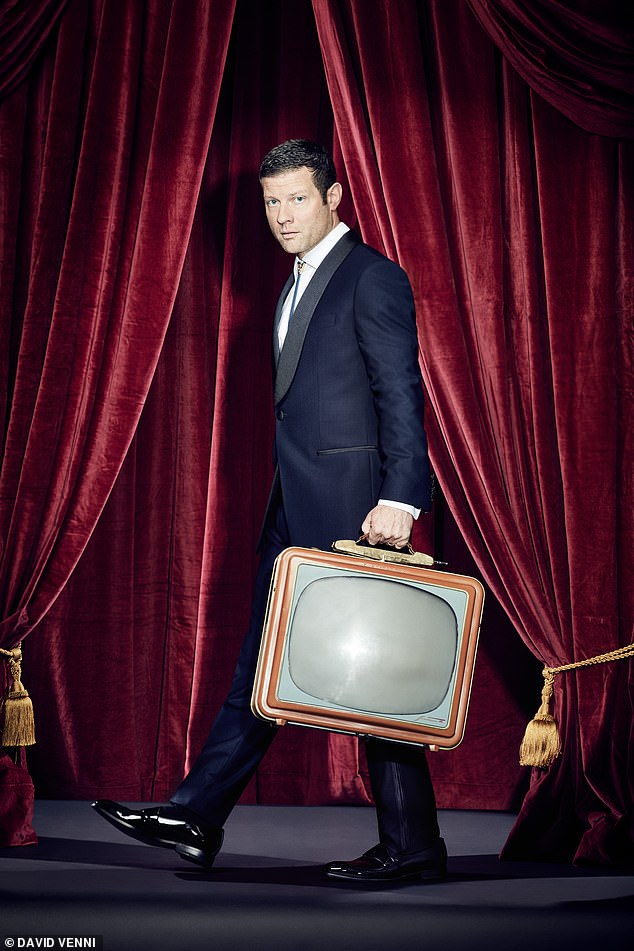 Dermot O’Leary knows his value in the cut-throat world of entertainment. X Factor head honcho Simon Cowell describes him as ‘a man to be underestimated at your peril’

It was a gamble that not only paid off but also cemented his A-list status. He returned to the show the following year with an £8 million four-year deal, which makes him one of the highest-paid presenters on TV. He has also maintained a foot in at the BBC – along with his Saturday morning Radio 2 show, he’s one of the presenters of the current BBC2 documentary series Icons. X Factor head honcho Simon Cowell describes him as ‘a man to be underestimated at your peril’.

His X-it clearly won him respect from the TV mogul. ‘Television is a game, and Simon lets everyone play. He doesn’t interfere with what I do. There’s a mutual respect. If anything, our relationship was better after I left and then came back. No one can get too big for their boots, especially not in this business.’

He will make jokes about his boss but he will never be drawn into bad-mouthing him or anyone else – he is far too smart.

1) M.A.S.H. A brilliant combination of comedy and drama about the boredom, futility and insanity or war and bureaucracy. Looking back, I was only eight… what were my parents thinking?

2) Hill Street Blues My first coming-of-age drama. I loved the grittiness of the characters, the city – and of course that theme tune.

3) Wogan The first show I ever went to see. He was effortless, funny, smart, didn’t take himself too seriously and he listened. Wogan and Parky – we’re all in their wake.

4) The Last Resort Totally changed the rules on how TV was made. Jonathan Ross is a true master of his craft, and a warm, lovely man.

5) Game Of Thrones Hard to pick a modern-day drama, but the world they created here, with characters we genuinely care about, had me hooked from day one.

Soon after we meet, a newspaper claimed that O’Leary would quit television if his presenter pals Ant McPartlin and Declan Donnelly – who presented as a duo for only a matter of weeks last year – won at the NTA awards. ‘If they win, we may as well just chuck in the towel,’ he was reported as saying.

‘That was said in jest,’ he says today, adding that the story was ‘absolute rubbish’. He was so outraged by the report that he took to social media to deny it. What he actually meant was that if the duo won the award for best presenters for the 18th year in a row, there was little point in anyone else trying.

O’Leary dreamed of being in what he describes as ‘this business’ ever since, as a nine-year-old boy from Colchester, Essex, he was patted on the head by his television god, Terry Wogan. He can recall the moment as if it was yesterday, because, for an Irish Catholic working-class kid obsessed with the small screen, it was a life-changing event. ‘My uncle Frank got a job working security at the Shepherd’s Bush Empire, where Wogan was filmed. My family felt like we had this ‘in’ to an unbelievable world of celebrity. And Terry Wogan was our hero.

‘So my mum and I went down there early when Terry walked past in an immaculate three-piece suit, carrying a glass of red wine. My mum stopped him and asked for an autograph. And he stood and patted me on my head and asked me my name. It was like being touched by God. I genuinely felt like I’d been marked out for something special.’

When O’Leary began working at Radio 2 he found himself at a dinner with Wogan, where the two bonded over similar upbringings and Irish rugby. Wogan gave his protégé a piece of advice: if there is one thing about radio, he said, it was to ‘never be afraid of the silence’. In a tribute to Wogan O’Leary wrote after the veteran broadcaster died in 2016, he concluded: ‘Never be afraid of the silence – I’ll try, Terry, but it’s deafening in your absence.’

Had it not been for Wogan, O’Leary would not be the presenter he is today. In an era when even the former superbrand Ant and Dec can’t be relied on to be squeaky clean, O’Leary has proved to be that rare thing: a male TV presenter with a spotless reputation whose main concern is to be good at his job. 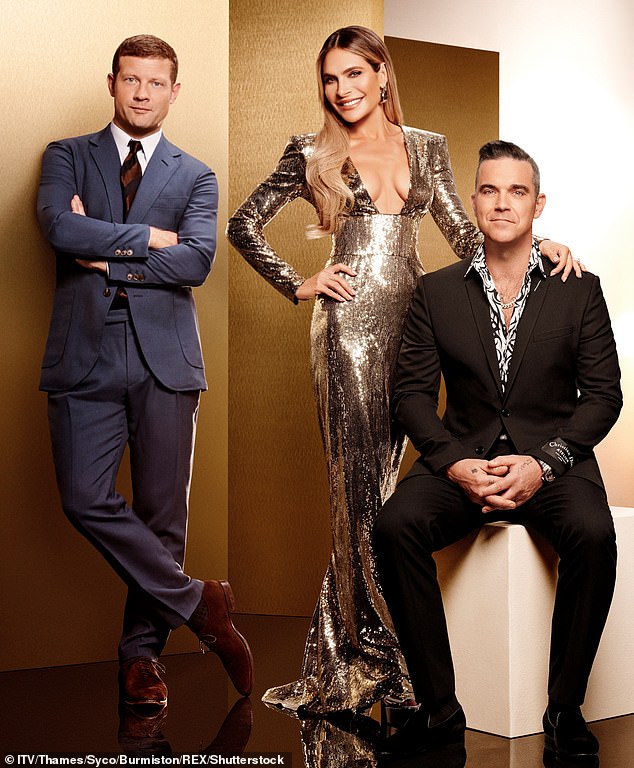 O’Leary, left, with X Factor judges Ayda Field and Robbie Williams. ‘I’m always thinking about the job. On The X Factor I spend a lot of time on my script with my writing partner Ivor Baddiel’

‘I’ve never seen the job of a presenter as being the celebrity,’ he says. ‘I have a work ethic that was instilled in me by my parents, and I’m lucky to have a non-addictive personality. Television is a brutal industry. I have mates with addictive personalities and that’s a killer. It can be ruination.’ (He stops to point out he is not referring to his friend, Ant McPartlin.)

‘My sister Nicola and I grew up in a very close family with definite boundaries. I went to a Catholic boys’ school where there were clear rules. At home we had limited time in front of the telly during the week, and on Saturdays my mum would come home early from work at BHS and we’d have a picnic in front of the telly watching The Generation Game and Blankety Blank. On Sundays it was Mass followed by watching the hurling. Then I’d be perched on a stool in a pub with a bag of crisps beside my uncles, aunts and their mates, listening to their conversations. I grew up loving to chat, wanting to be part of that buzz but also being very aware that you only deserved that if you’d worked hard for it.’

There was one point in his life when O’Leary made a mistake, but he now recalls it as less a mistake than a life lesson. ‘I messed up my GCSEs,’ he says. ‘I was one of those boys who thought they could just get by and sail through. I did really badly [he failed all but two]. I was ashamed because I’d let myself down and I’d let my parents down.

He returned to school, retook his GCSEs and went on to pass his A-levels with flying colours. He ended up with a degree in media and politics from Middlesex University, then headed to London to work as a runner for a production company, earning £9,500 a year.

‘Every month my dad would send me £38, which was what he could afford, to help me out,’ he says then stops for a moment, overcome with sudden emotion. ‘That tells you everything you need to know about what sort of a guy my dad was. He worked hard, he put his kids first, he believed in us. And that made me want to work hard to prove him right.’

Being a perfectionist helps too. ‘I’m always thinking about the job. On The X Factor I spend a lot of time on my script with my writing partner Ivor Baddiel [brother of comedian David]. Then I need to know everything that’s going to happen, the time frames, the songs, when the scene changes are going to be and videotapes are going to play. I’m like the conductor of an orchestra. Simon never has a clue when we’re about to go to a break. His job is to be entertaining, my job is to make the show work.’

He must feel like a man who has made it. He shakes his head: ‘Like a man who is still trying very hard. Never think you are too up because there’s only one way from that, and it’s down. I’m still plugging away at my game. That’s how I like it.’

Dermot O’Leary presents the ‘National Television Awards’ live from the O2 on Tuesday at 7.30pm on ITV1