Alessandro Michele is stepping down as Gucci’s creative director after a seven-year long tenure which saw him revive the brand’s image and boosting sales.

Michele is leaving his role, the label announced yesterday, having sharply redefined Gucci´s codes with romanticism and gender-fluidity, all the while powering revenues for the Kering parent.

Womenswear Daily reported Michele´s expected departure on Tuesday, citing sources that said Michele had failed to meet a request to ‘initiate a strong design shift,’ and that the chairman of Gucci´s parent Kering, Francois-Henri Pinault, was looking for a change of pace.

In the statement announcing Michele´s departure, Gucci credited him with having played ‘a fundamental part in making the brand what it is today through his groundbreaking creativity.’

The designer was appointed creative director in January 2015, just days after he led a creative team that pulled together a menswear show in just five days, following the hasty exit of his predecessor.

Alessandro Michele is leaving his role as Gucci’s creative Director, the fashion house announced yesterday, having sharply redefined Gucci´s codes with romanticism and gender-fluidity, all the while powering revenues for the Kering parent (pictured in 2018) 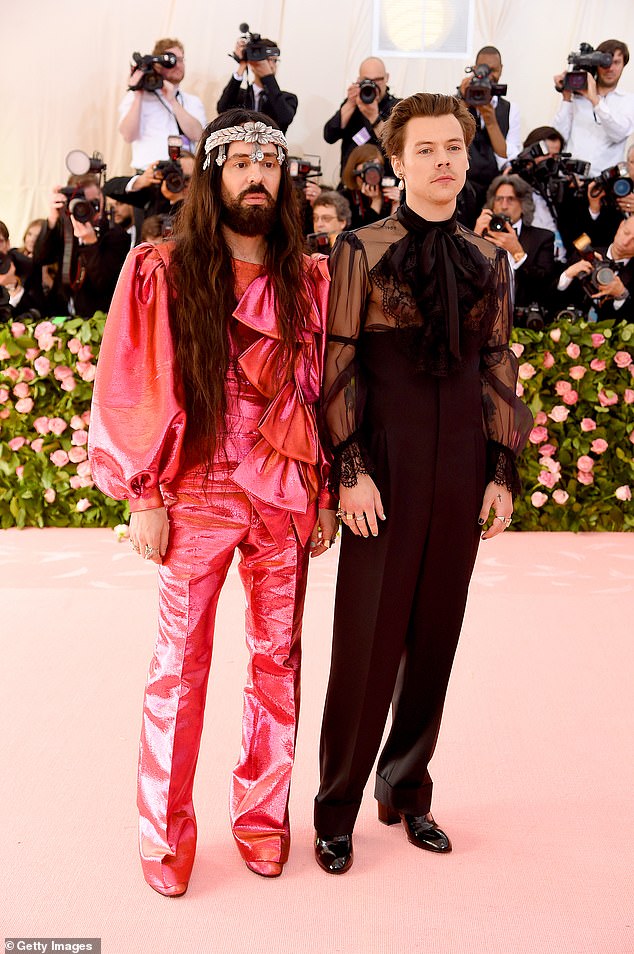 Michele cited ‘different perspectives´ as the reason for his departure, without elaborating.

‘Today an extraordinary journey ends for me, lasting more than 20 years, within a company to which I have tirelessly dedicated all my love and creative passion,’ he said.

For most of his tenure, Gucci has turned in stellar revenues, accounting for most of Kerings profits. But it has been under some scrutiny recently after underperforming rivals. 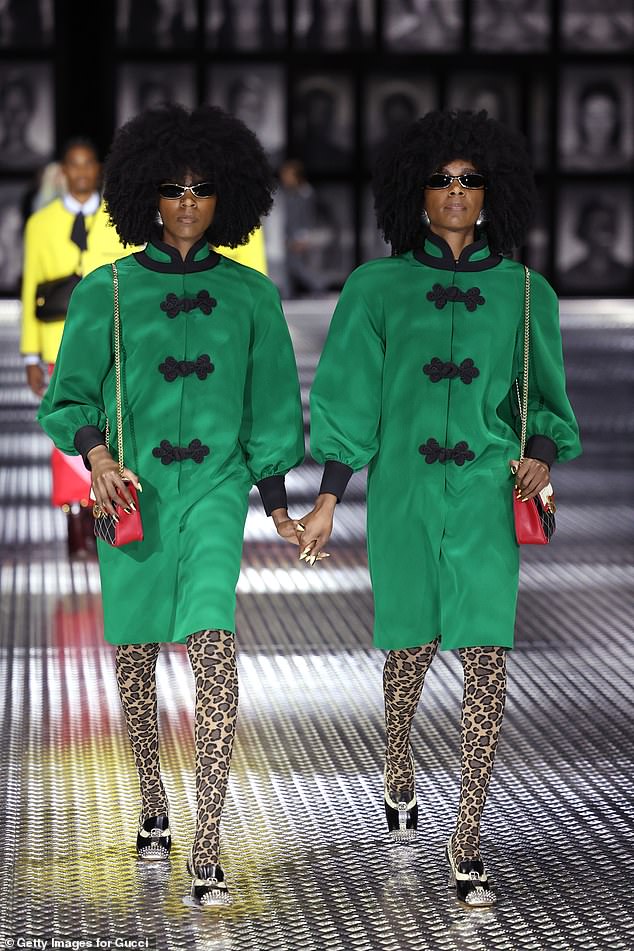 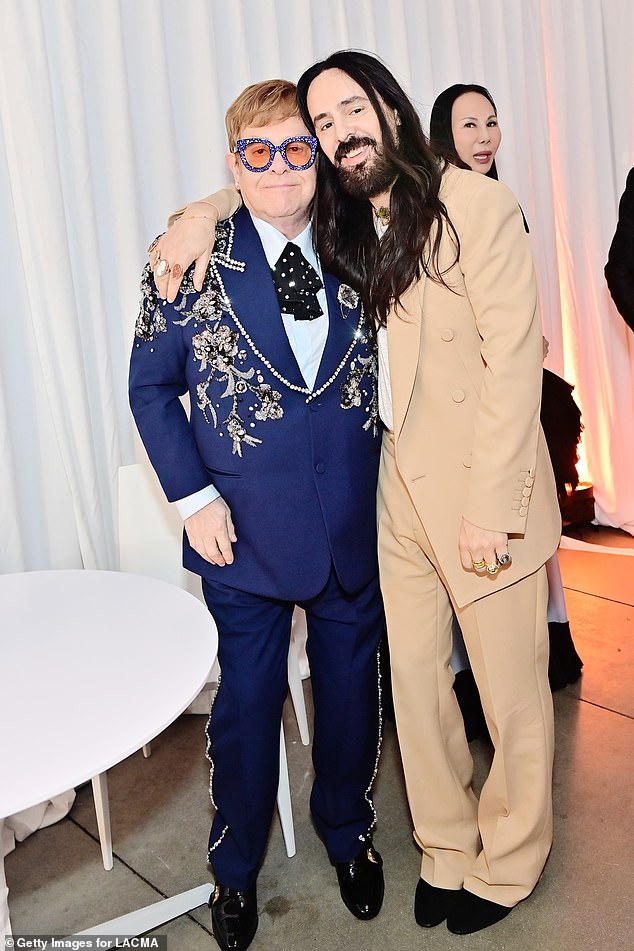 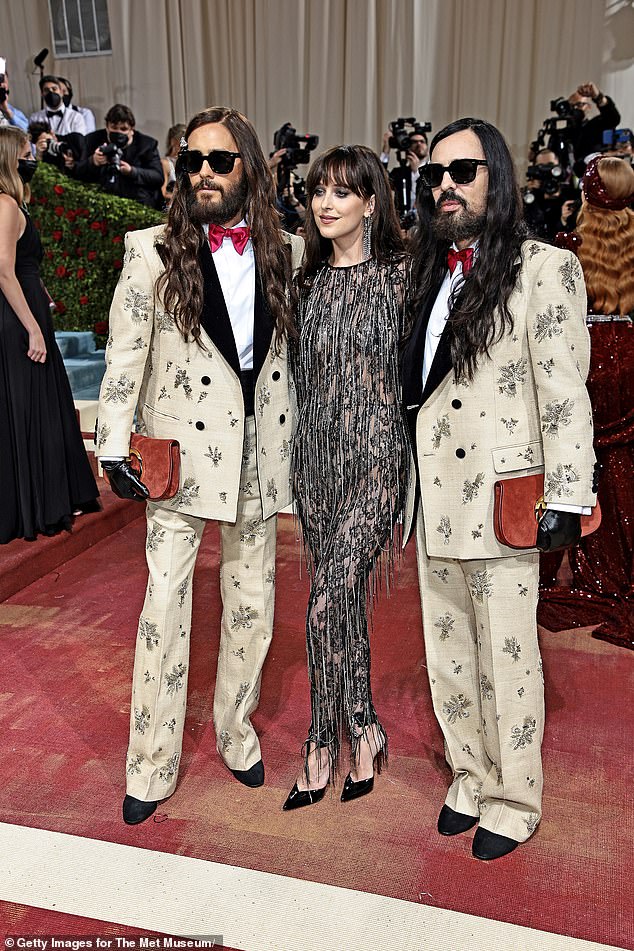 Dakota Johnson poses with Michele and Jared Leto, left, at New York’s 2022 Met Gala back in May

Michele´s partnerships with Hollywood elite and VIPs were often rooted in friendships. Jared Leto has been a frequent front-row guest at Gucci shows during Michele´s tenure, for a time adopting the same straight long hair and beard sported by the Gucci designer.

Michele also has famously dressed Billie Eilish, Florence Welch and the Italian rock band Maneskin on its current tour. And he recently unveiled a collection designed with Harry Styles.

For his last runway collection, unveiled in September, Michele constructed a parallel universe of side-by-side shows separated by a wall that when lifted revealed twins in identical looks in synchronic stride. The reveal of the 68 sets of identically dressed twins left normally jaded fashionistas confessing they had been brought to tears.

Michele joined Gucci in 2002, becoming an associate to the creative director in May 2011. In 2014, he was named creative director of the Richard Ginori porcelain brand, owned by Gucci. He previously worked as a senior accessories designer at Fendi and studied at the Accademia di Costume e di Moda in Rome.

Gucci CEO and president, Marco Bizzarri, thanked Michele ‘for his 20 years of commitment to Gucci, and for his vision, devotion and unconditional love for this unique house.’

‘The road that Gucci and Alessandro walked together over the past years is unique and will remain as an outstanding moment in the history of the house,’  Pinault said in a statement.

Gucci said the in-house design team would take over the collections until a new creative director is named.

‘To them goes my most sincerest wish: may you continue to cultivate your dreams, the subtle and intangible matter that makes life worth living,’ Michele said in his farewell statement.