Designers dogs are for sale to British tourists in Spanish hotspot

Gazing out of its cage in a Spanish pet shop, this adorable chihuahua puppy would be hard to resist for any animal lover.

But in buying a pet like this and taking it home to Britain, holidaymakers risk unwittingly fuelling the dog-smuggling trade, charities warn.

Such designer pets are being offered in resorts with promises that local vets will fix vaccinations, microchips and paperwork so the puppy can be taken back to the UK immediately.

But the Dogs Trust believes many will not have the right health checks to make them safe to take home. Experts suggest paperwork can also be forged.

And the puppies may have been bred in eastern Europe before being smuggled into Spain – as there is no way to trace where they came from.

An investigation by the charity has discovered a booming puppy-trafficking trade and learned that one town in Spain was exporting about 20,000 dogs a year, earning gangs £28 million.

This week a pet shop in Benidorm was offering three-month-old chihuahuas along with the services of a nearby vet who said 100 euros (£90) would secure the jabs and pet passport within 15 minutes for immediate travel.

Puppies are not allowed to enter Britain until 15 weeks’ old and only after they have been vaccinated for rabies, distemper and canine hepatitis and treated for tapeworm one to five days prior to travel.

The Daily Mail found out how easy it could be to buy a puppy at a pet shop, pay for papers and then take it back to the UK straight away.

Mascotas pet shop near the busy seafront in Benidorm said the chihuahuas displayed in cages for 460 euros (£415) had received one jab and could be taken straight to the vet. 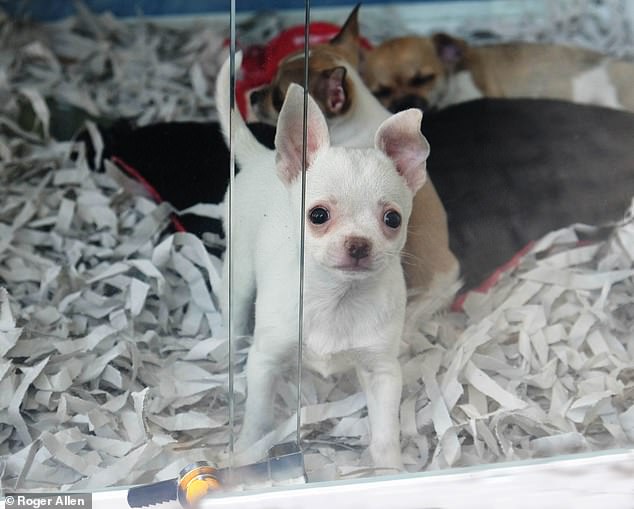 Designer pets such as this chihuahua are being offered in resorts with promises that local vets will fix vaccinations, microchips and paperwork so the puppy can be taken back to the UK immediately

A call to the vet confirmed the speed of the transaction, with an assistant saying: ‘Just bring the dog, your passport and 100 euros and it will take 15 minutes. You can take the dog straight back to England.’

Visitors are regularly drawn to the window of the pet shop, which also sold French bulldogs and bichon frises.

Sales from such shops are not illegal in Spain and the manager said: ‘We are doing nothing wrong. It is not illegal, it is OK.’ Campaigners have forced the UK to enact laws banning the sale of kittens and puppies from third parties such as pet shops and dealers, forcing buyers to deal with breeders directly. But the incoming laws will not apply in Europe.

Paula Boyden, the Dogs Trust’s veterinary director, said: ‘This is worrying. These puppies should not be allowed back to the UK straight away. They need to be chipped, vaccinated for rabies and to wait the correct time before travel. 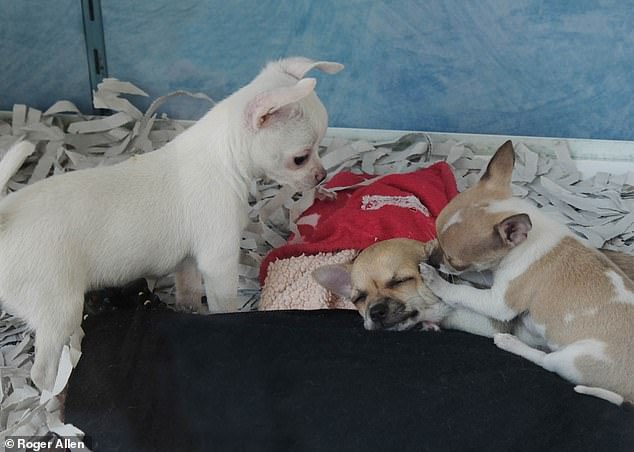 ‘When we see puppies like that, there is a strong desire to care for them but you are bringing home a new living member of your family and you cannot be sure where they came from or how good their health is.’

She added: ‘We are told puppies are the new drugs [for the gangs]. The return is high and the jeopardy is low.

‘Of the almost 1,000 puppies seized at the border, there have been only two prosecutions and no sentences.’ Joanna Randall, of animal welfare charity Four Paws, said: ‘Our advice is never to buy a puppy overseas and bring it back to the UK. But when you see a puppy in a pet shop like this, you fall in love and want to make the purchase – this is how they get you.

‘This pet shop is hugely symbolic of the entire puppy trade in Europe. They are a third-party supplier of puppies that have come from somewhere else in Europe and the reality is that you can never trace where they came from.

‘There is the potential of dodgy paperwork and pets being sold in Benidorm could have been bred in Serbia or through a market place in Hungary, microchipped before ending up in the UK.’