Designers Rosie van Cutsem has revealed how the smart Norfolk set have been enjoying G&T sundowners and online yoga with the mother of Prince Harry’s goddaughter during lockdown.

Rosie, 38, is among the darlings of the royal set who lives just a stone’s throw from Prince William, 38, and Kate Middleton’s, 38, lockdown pad of Anmer Hall.

She told Tatler how she and her sister Lucia, 34, have been enjoying ‘wonderful’ evenings drinking G&T sundowners, taking part in online yoga classes with the mother of Prince Harry’s goddaughter Zoe Warren and running through fields.

For the Duke and Duchess of Cambridge, north Norfolk’s very remoteness is part of its appeal, along with its golden beaches, posh pubs and landed squires known as the Turnip Toffs.

We take a look at the women who make up Kate’s very glossy lockdown posse.

Designers Rosie van Cutsem, 38, and her sister Lucia Ruck Keene, 34, have revealed how they’ve been ‘loving’ spending G&T sundowners and running in the countryside during lockdown in Norfolk 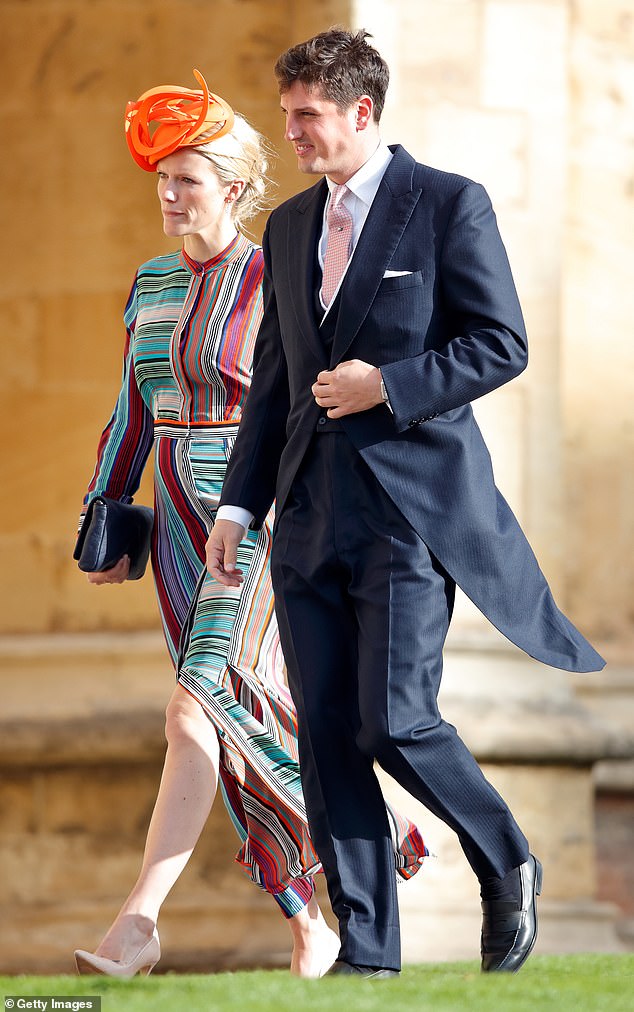 Rosie revealed that Zoe Warren, who is the mother of Prince Harry’s goddaughter, has been running online yoga sessions during the pandemic  (pictured at Princess Eugenie’s wedding in 2018) 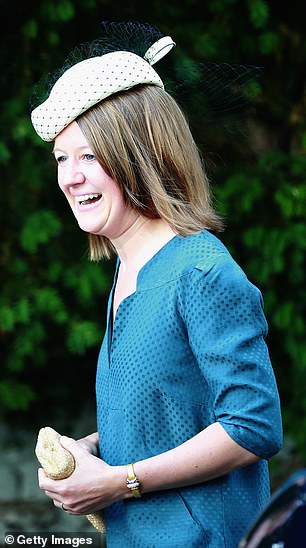 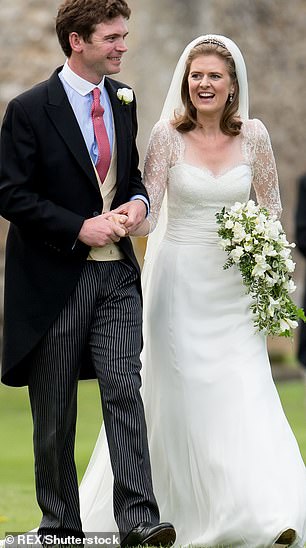 Other members of Kate’s exclusive Norfolk set include Laura Fellowes, who is one of Princess Charlotte’s godmothers  (pictured left at the royal’s christening in 2015)  and Lady Laura Meade (pictured right)

William van Cutsem grew up at Anmer Hall before Hugh moved to 4,000-acre Hilborough nearby and built a neo-Palladian house. It has a magnificent wild game shoot.

Prince William and William remain close to one another and have acknowledged their friendship by making each other godparents to their children. 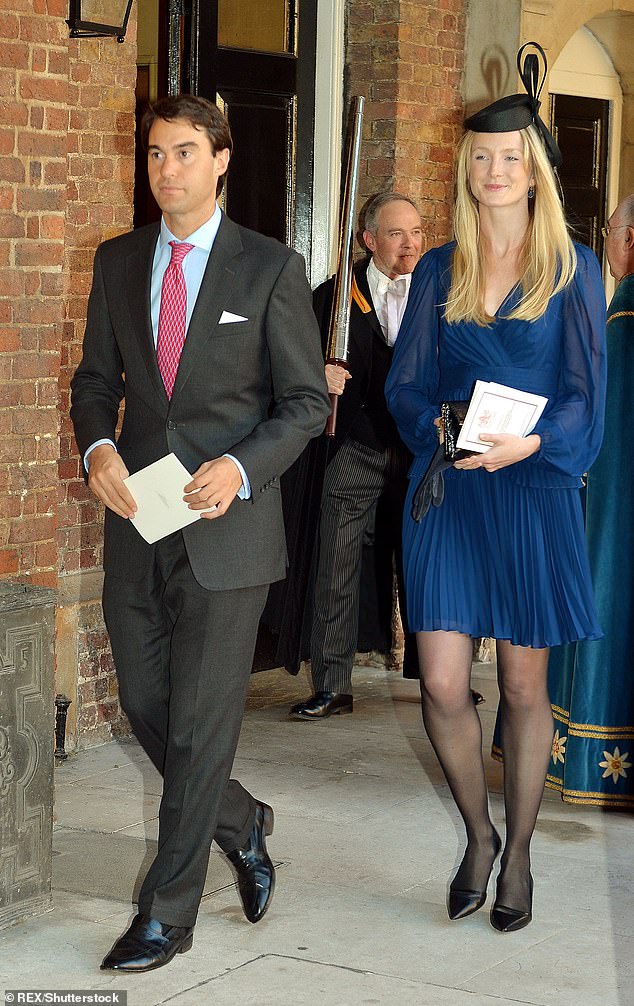 Meanwhile Rosie’s husband William van Cutsem is a close childhood friend of the Duke of Cambridge and is godfather to Prince George, six (pictured, at his christening) 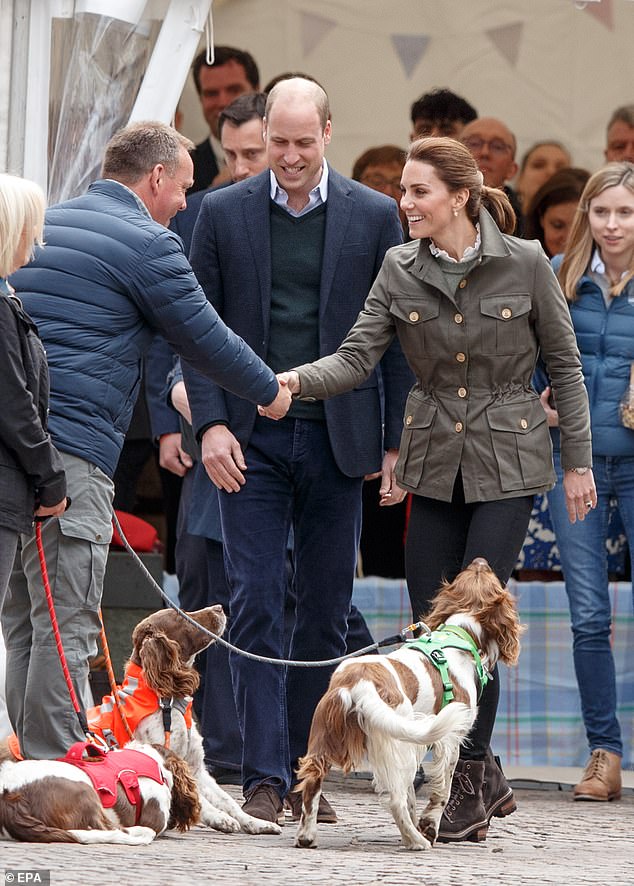 The Duchess of Cambridge is amoung the well-heeled clients who have been spotted in the sister’s designers (pictured, wearing a coat from Troy London in 2019)

He married Rosie in 2013 after meeting at a shoot in Hilborough, and the couple now live just up the road from Anmer Hall.

The same year, Rosie launched an outdoorwear label Troy London with her sister Lucia, with the Duchess of Cambridge regularly wearing items from the brand.

At the start of lockdown, the sisters decided to isolate together at Rosie’s home in Norfolk, which she shares with her husband William and their two sons.

Lucia left her flat in Ladbroke Grove and moved into the country, with the sisters admitting they were ‘loving’ spending the family time together. 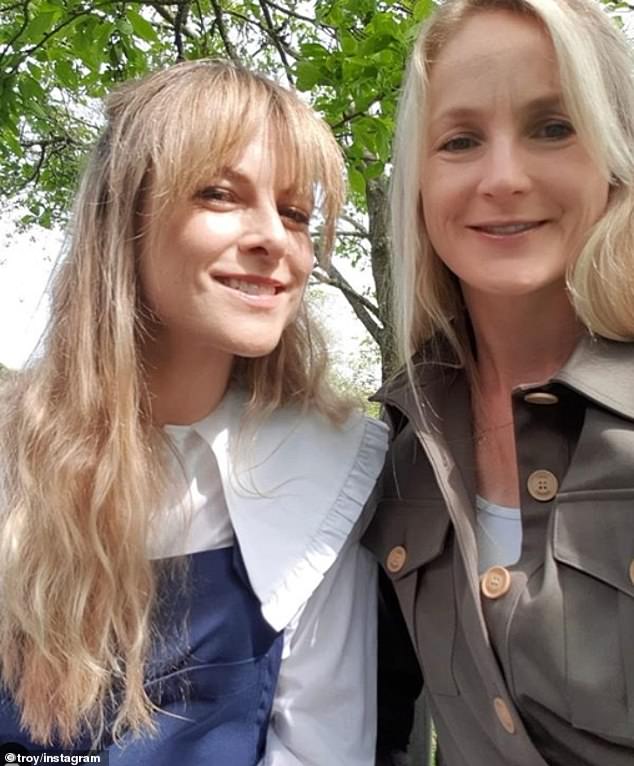 The sisters, who set up their fashion label Troy in 2013, have revealed how they struggled to get the business of the ground because they remained dedicated to making their products in the UK

Lucia said it had been ‘wonderful’ to enjoy G&T sundowners around the firepit, and running through the fields close to their house.

Palladian whopper Holkham Hall is home to Viscount and Viscountess Coke of Holkham, the Earl and Countess of Leicester while to Kate and Prince William,  they’ll be known as Tom and Polly Coke — pronounced Cook.

The couple have four children who are free to roam in Holkham’s 25,000 acres of park, farmland and nature reserve. 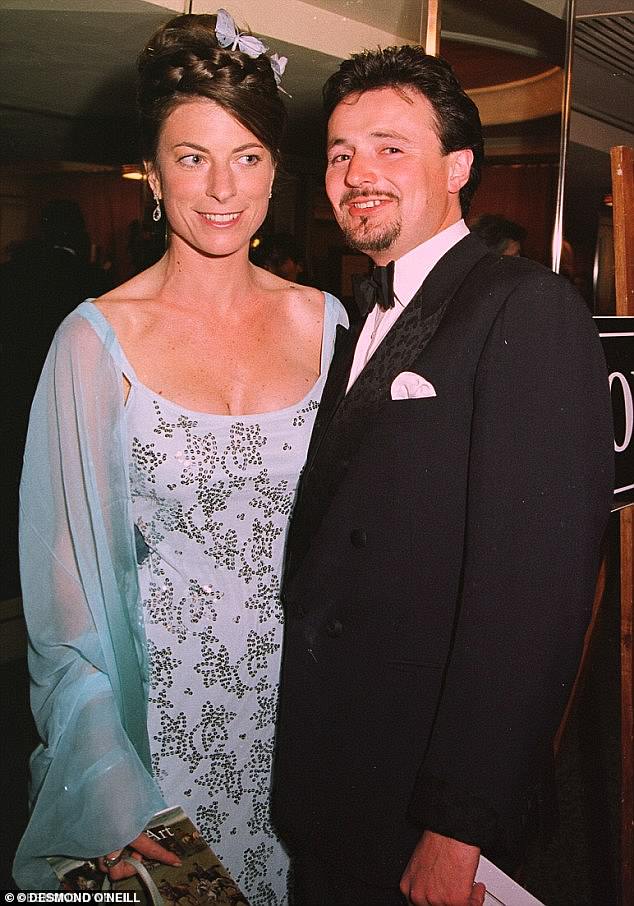 Meanwhile fashionable milliner Polly Coke is a good friend of Kate’s, and lives at the palatial Holkham Hall

Polly is a fashionable friend for Kate; she is a milliner by trade and her mother is a fashion designer who’s dressed royals — her cousin is retro designer Cath Kidston, who helped her set up shop.

The Queen spends New Year’s Eve at Holkham, but the New Year’s Day picnic — bullshots (consomme laced with vodka) and roast pheasant — is the most sought after invitation.

The jewel of Holkham is its four-mile long beach, often voted the finest in the UK.

This sweep of golden sand — as seen at the end of the film Shakespeare In Love, with Gwyneth Paltrow staring forlornly out to sea — is perfect bucket-and-spade territory for Prince George. Though not the bit where the nudists like to sunbathe… 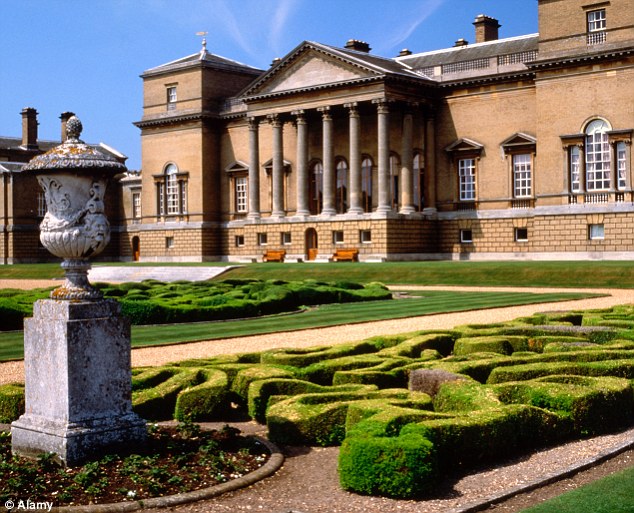 What a whopper: Holkham Hall is home to Viscount and Viscountess Coke… and a four mile long beach

The daughter of Diana’s sister Jane Fellowes, Laura is married to equity analyst Nick Pettman and they have two sons around the same age as Prince George, six.

Her family live in west Norfolk, where her father Lord Fellowes is said to be the most charming dinner guest in the county. Laura was bridesmaid to Andrew and Fergie.

Laura’s nickname is Mavis and she writes award- winning fiction under the name Mave Fellowes.

Meanwhile author Laura Fellowes, whose mother is Princess Diana’s sister Jane is another member of the Norfolk set

Davina Duckworth-Chad is the daughter of local landowner Anthony, who lives at 40-room Pynkney Hall near King’s Lynn.

Davina’s mother was Diana’s cousin, her father’s a friend of Charles and her brother was a royal equerry.

She is married to Tom Barber, an Old Etonian son of a baronet, and they have twins, India and Sienna, eight.

A photograph of Davina was used to launch Country Life’s website and she became known as ‘the deb on the web.’ 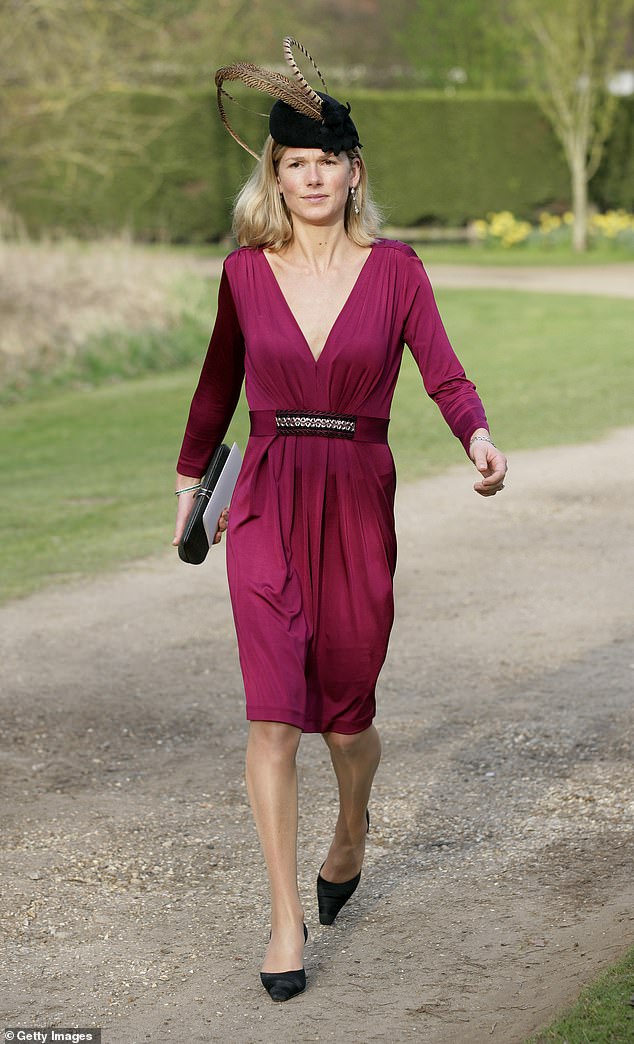 The stylish and elegant Davina Duckworth-Chad is the daughter of local landowner Anthony, who lives at 40-room Pynkney Hall near King’s Lynn

Lady Laura Meade is the wife of James Meade, one of Prince William’s closest friends from Eton, who was his best man and gave a speech at the royal wedding.

She is daughter to Julian Marsham, 8th Earl of Romney, and married James in 2013, a wedding attended by William.

The couple were spotted with the Cambridges on Sunday, as they attended church alongside the Queen. 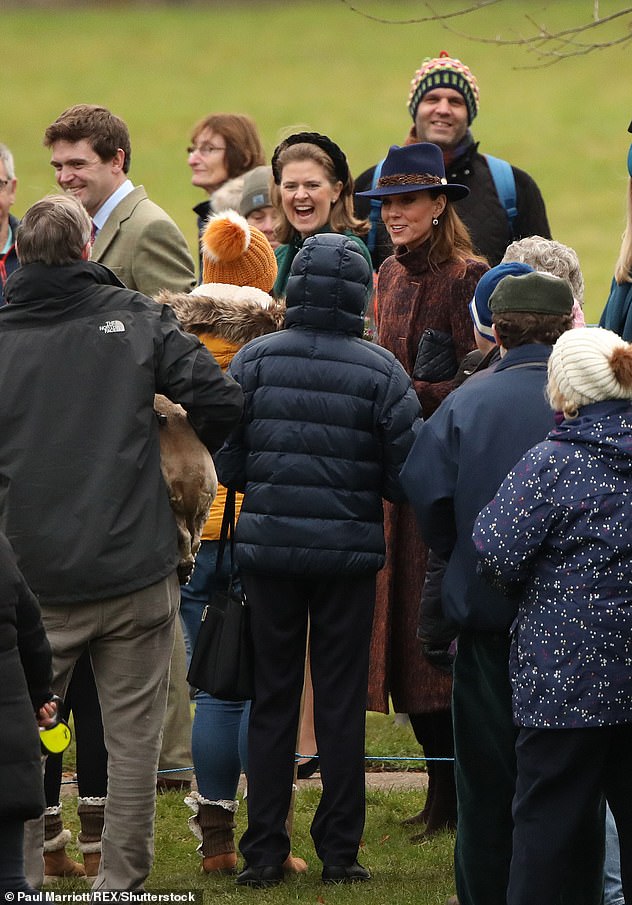 Lady Laura Meade (seen to the left of Kate with a hairband) is said to be godmother to Prince Louis, while James is reportedly godfather to Princess Charlotte. The couple, who also live near the Cambridges’ country retreat Amner Hall, were spotted with the Cambridges on Sunday, as they attended church alongside the Queen

Zoe Warren is married to Darren Warren, a close friend to Princes William and Harry, who was one of Princess Diana’s godchildren, and whose father is the Queen’s racing manager John Warren.

Their daughter Zalia was a bridesmaid at Prince Harry and Meghan Markle’s wedding, and is one of Harry’s goddaughters.

With their mutual interest of racing, the royal family and the Warrens are frequently spotted together at Ascot. 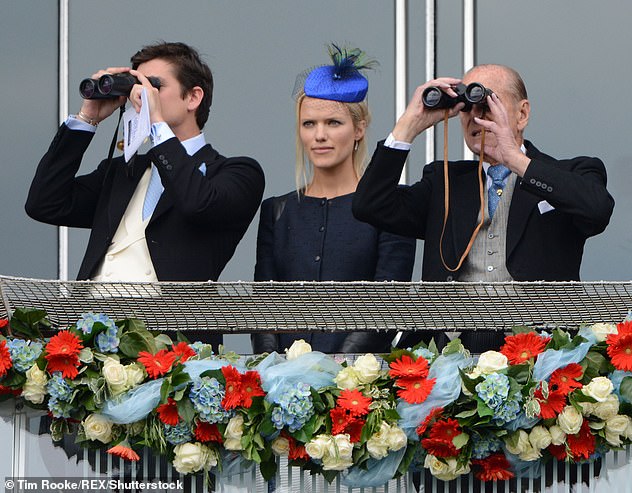 Zoe Warren is married to Darren Warren, a close friend to Princes William and Harry, who was one of Princess Diana’s godchildren, and whose father is the Queen’s racing manager John Warren (pictured, with Prince Philip)

Hannah and Kate attended Marlborough College together, where they played on several of the same sports teams.

Kate’s sister Pippa was a couple of years below Kate at the same school and also played sports.

She is married to Robert Carter, whose family are wealthy Norfolk landowners.

Both William and Kate attended their wedding in 2012. 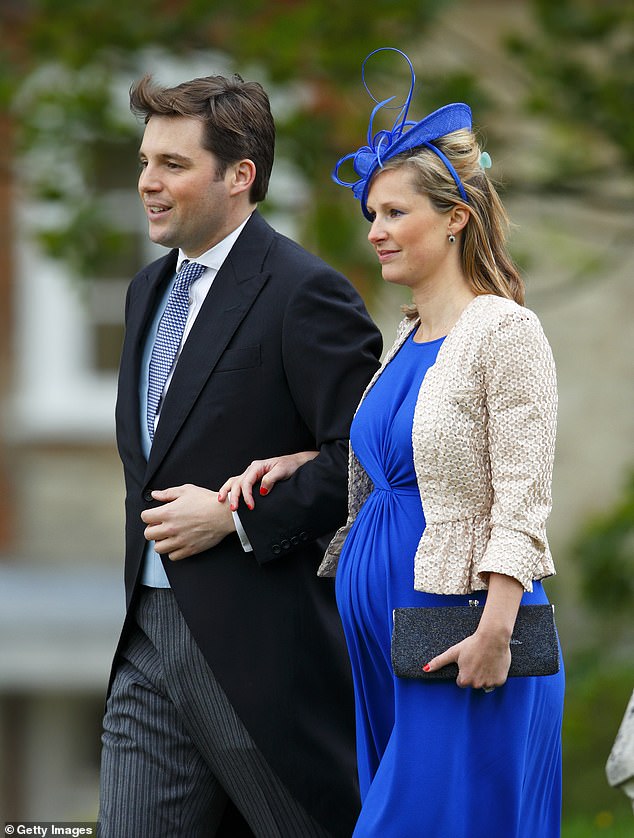 Hannah (seen with husband Robert at the wedding of William van Cutsem and Rosie Ruck Keene) and Kate attended Marlborough College together, where they played on several of the same sports teams

Her sister-in-law, Sophie Carter, is one of Charlotte’s godparents.

Sophie has been a friend to Kate for many years and is often to be found quietly by the Duchess’s side at various parties and events.

While in their younger days the girls used to party the nights away, they now mainly watch tennis (they play together and hang out at Wimbledon), though they were pictured cheering exuberantly at Cirque du Soleil for Kate’s 31st birthday.

The daughter of Norfolk construction tycoon Robert Carter, Sophie is also, helpfully, an expert in early years’ learning, having been a nursery and prep school teacher. 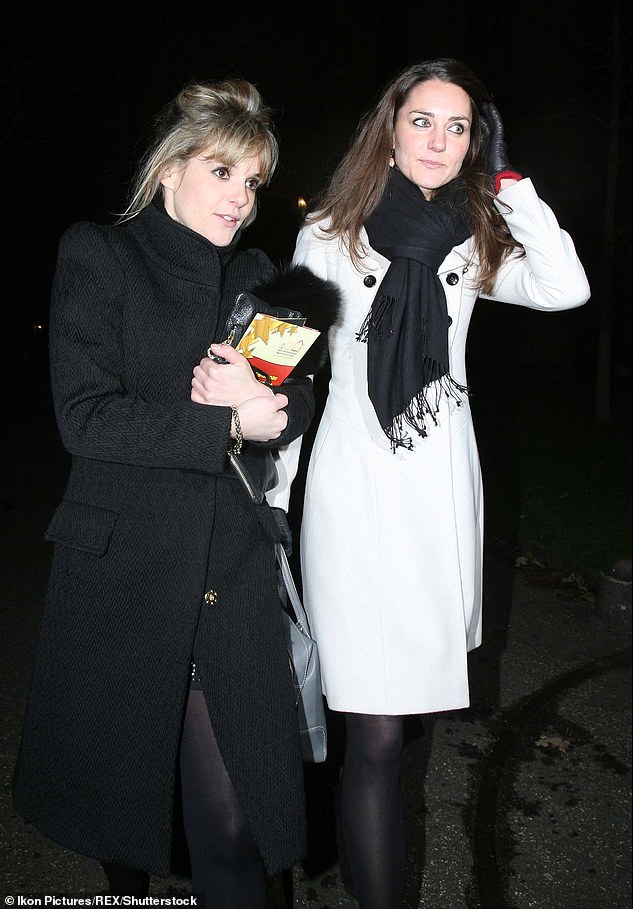 Sophie is one of Charlotte’s godparents, and was seen attending her christening in 2015. 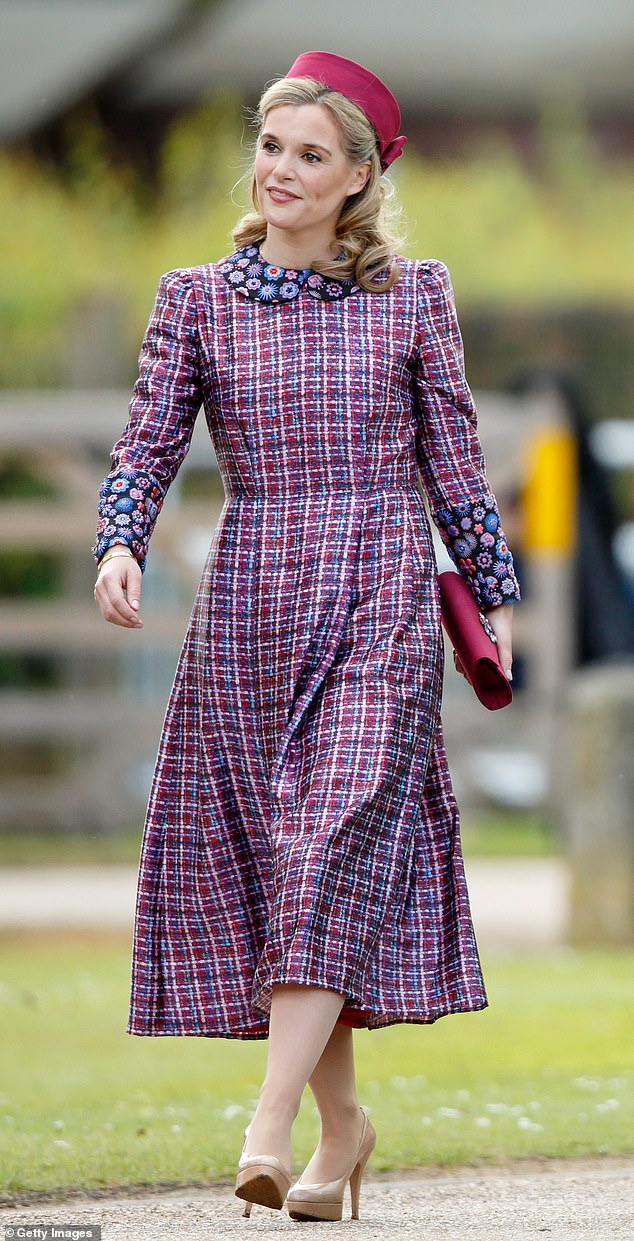 Sophie is another member of the set to be one of Princess Charlotte’s godparents, and was seen attending her christening in 2015