An undetermined number of people have leaped from a 25-story apartment building in Los Angeles after a fire broke out on the sixth floor, according to the Los Angeles Fire Department.

The fire was reported shortly after 8.30am at 11740 West Wilshire Boulevard in Brentwood, and the jumpers were believed to be on or around the sixth floor, where LAFD said the fire was ‘well developed’.

It is not clear how many people have jumped from the building, according to the Los Angeles Fire Department.

Multiple victims were medically evacuated by helicopter from the building’s roof, according to emergency radio traffic. At least one victim was in traumatic arrest and paramedics were attempting CPR. 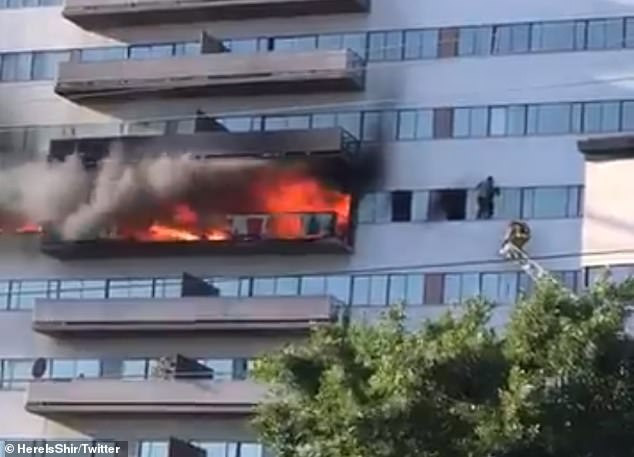 Some people reportedly jumped from the building, and at least one was rescued by a ladder truck while clinging to a ledge feet away from the blazing inferno

Chilling videos shared on social media show flames roaring from a balcony as a person clinging to a narrow ledge tries to inch away from the inferno.

A firefighter on a ladder truck was seen attempting to reach the person and bring them to safety.

Residents were seen gathering on the top floor of the building awaiting evacuation as fire crews knocked down the blaze.

The Los Angeles Fire Department said that 335 firefighters were assigned to battle the blaze, including four rescue-capable helicopters. 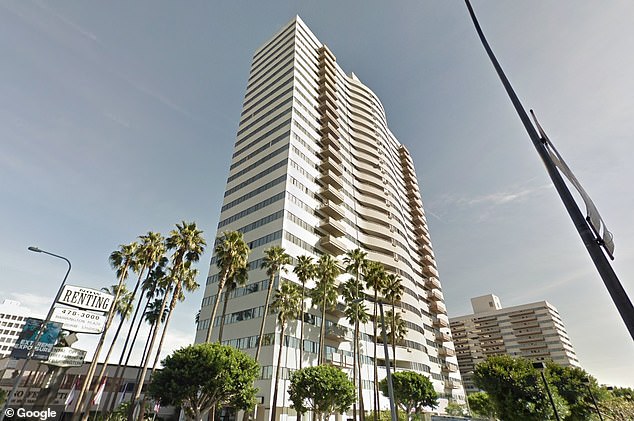 The fire was reported shortly after 8.30am at 11740 West Wilshire Boulevard (file photo)

The building is the same one where a major fire broke out in October 2013.

The 2013 fire on the 11th floor injured eight people, displaced dozens of residents and caused millions of dollars in damages.

At that time, the building did not have sprinklers installed because it was built 52 years ago and was exempt from safety codes. It’s unclear whether sprinklers have been installed in the years since.