Retailers and delivery firms are so desperate for temporary staff this Christmas that they have brought in ‘fast-track’ application processes.

There is no need to send a CV and you could be hired after just a 15-minute virtual chat.

What’s more, you could bag a sign-up bonus worth hundreds or even thousands of pounds – just for signing up.

Amazon is offering a £2,000 bonus for those willing to work as a warehouse operative in London, Bathgate, or Grangemouth in Scotland, for example.

And it is not the only company offering the carrot of sign-up bonuses for temp workers this festive season.

According to recruitment website Adzuna, there are 1,329 job openings advertising a Christmas bonus for successful candidates.

Others offering cash incentives include logistics firm DPD, which is offering £1,000 for night parcel sorters.

And retailers are in on the action too. Ocado, AO.com and Hand Picked Hotels are all offering £500 bonuses for various roles, according to Adzuna.

Companies are offering lucrative sign-up bonuses for people that are successful in their temp jobs. These include DPD, Ocado, AO.com, Amazon and Hand Picked Hotels

These types of bonuses could help career changers, students and workers who have struggled during the pandemic to boost their Christmas savings pot, cover any unforeseen extras or make plans for the new year.

The average hourly temp rates for labour-intensive jobs range from £9 an hour for seasonal gift wrappers, up to £30 per hour (£435 per shift) if you take on the role of a snow clearance specialist, Adzuna says.

But you could earn even more per hour if you have the right qualifications. 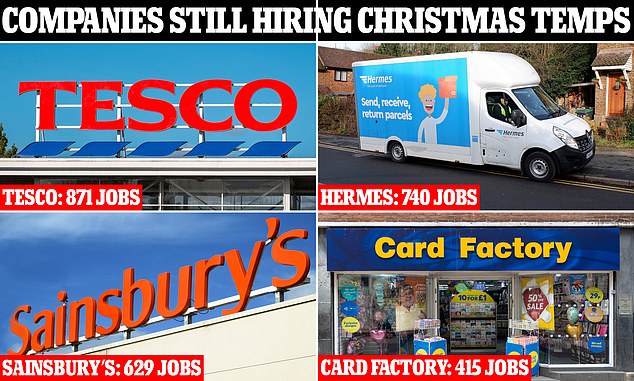 Apply now: Big retailers and delivery firms still have temp jobs on offer for this Christmas

Some of the highest-paying temp jobs currently being advertised include a teacher role, which pays between £130 and £160 an hour, or a paediatric nurse position in London, which is being advertised by recruiter Randstad, offering £45 to £52 per hour over Christmas.

Lucrative sign-up bonuses and higher wages are being offered because companies are struggling to fill thousands of vacancies.

According to Adzuna, there are currently 26,307 Christmas jobs on offer across the UK – nearly double the 13,668 on offer at the same time last year. 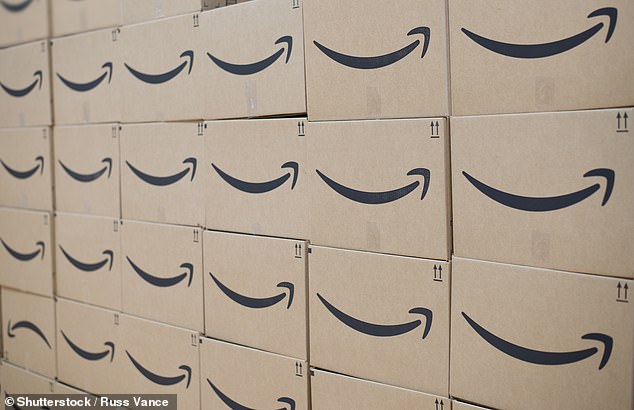 Amazon is offering a £2,000 bonus for a temporary warehouse operative this Christmas

Andrew Hunter, co-founder of Adzuna, says: ‘Christmas 2021 promises to be a season of opportunity for jobseekers, with a huge array of temporary roles still open and enticing financial rewards on offer.

‘It’s a great opportunity for jobseekers to add some extra pounds to their bank balances, as well as to their waistlines.

‘For students, those who have recently come off furlough, or those simply looking for a stop gap job before a career change, these openings will help relieve some of the financial pressures that can come with the festive season.’

These firms have the most roles to fill

Christmas jobs tend to be concentrated in retail, logistics and warehousing.

Those still hiring Christmas temps include Tesco, Hermes and Sainsbury’s among others

Adzuna says that, in total, ten of the largest seasonal employers need to fill 135,500 roles between them this Christmas. Tesco alone is taking on an additional 30,000 workers over the winter period.

After the limited number of festive job roles in 2020 due to the pandemic, 2021 is seeing the return of some more unusual Christmas jobs.

These include jobs like ice rink supervisors at Hampton Court Palace paying £15 per hour; an electrical mate (who helps to put up Christmas lights) which pays between £14-15 an hour; turkey pluckers that earn between £9.50 and £11 an hour; and elves that work at Santa’s grotto for £10.65 an hour.

Average hourly temp rates for labour-intensive roles range from £9 an hour for seasonal gift wrappers, up to £30 per hour (£435 per shift) for a ‘snow clearance specialist’

Holding out for a permanent job could be lucrative too

If seasonal jobs are not appealing, there are plenty of well-paid permanent roles available that you may want to hold out for instead, with thousands of more vacancies expected to be advertised in 2022.

Heather Jones, HR director at online marketplace OnBuy, says OnBuy is rapidly expanding and will offer more than 100 roles in the next six to nine months.

She adds: ‘It’s a very hard market [for employers] now. If you talk to any recruiter, they’ll tell you they haven’t seen anything like it.

‘So, unless you’re a student you shouldn’t really be looking at seasonal jobs, as there are so many permanent jobs on offer with plenty of recruiters making counter-offers.

‘Companies are struggling to fill roles because of Brexit and Covid-19. While you may not see sign up bonuses on offer with permanent roles, companies are offering plenty of other benefits such as bonus payments, unlimited holiday, remote and flexible working.’

Which holiday job is right for you?

There are a few key elements you need to consider when choosing a job this Christmas, says Adzuna. These include:

· Determine your goal. Are you looking to jump-start a career, or is the priority extra money for the festive period? Andrew Hunter, co-founder of Adzuna, says: ‘While some internships may pay less, those may be more valuable in setting the stage for your future career and perhaps your time would be better spent applying for a grad scheme or internship. 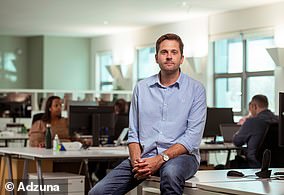 Andrew Hunter, co-founder of Adzuna, says there are plenty of roles for temp job seekers looking for some extra cash over Christmas

‘Other roles may offer a higher pay cheque but be less relevant for where you want to be in the years ahead. There’s no wrong answer to which path you take, but it’s important to make sure it’s the right one for you.’

· Consider the skills you will learn and their future value. If your goal is to work in project management, don’t discount an administrative role because it seems too different.

Hunter says: ‘Admin roles will have helped fine-tune organisational abilities and workload prioritisation, too, which can be applied everywhere.’

· Look at the salary. Build a simple spreadsheet to understand your personal finances and budget for how much you will spend over Christmas, and how much you can save.

· Get job satisfaction. Hunter says: ‘Christmas is a time for festivities and seeing friends and family. If you’re teetering between a job with a description that excites you and one that doesn’t, be mindful of what will make you happy and follow your heart.’