Desperate stores are praying for a last-minute sales rush to save their Christmas – slashing prices in a bid to lure thrifty shoppers.

Britons are expected to spend almost £3billion – both on the High Street and using online firms – on their final Christmas purchases during ‘Frenzied Friday’ and ‘Super Saturday’.

Desperate stores are praying for a last-minute sales rush to save their Christmas. The graphic shows where to find the best discounts

Chains, particularly those selling fashions, have cut prices to jumble sale levels with dresses and tops as cheap as £2.

At the same time, online retailers such as Amazon, Net a Porter and Asos are turning the screw by allowing orders as late as Christmas Eve for same day delivery.

However, they will be under severe pressure to make sure items arrive before Christmas morning or face a fierce consumer backlash. Research by the consumer group Which? found more than half of people who shopped online over last year’s festive period had a problem with deliveries.

Many shoppers are believed to be holding back Christmas spending until the very last minute in an effort to pressure retailers to make ever deeper price cuts.

Retail and online delivery expert David Jinks, of ParcelHero, said: ‘Consumers seem to have been rather underwhelmed by the Black Friday or Cyber Monday weekend offers and are perhaps holding off to see if there are further bargains.’ 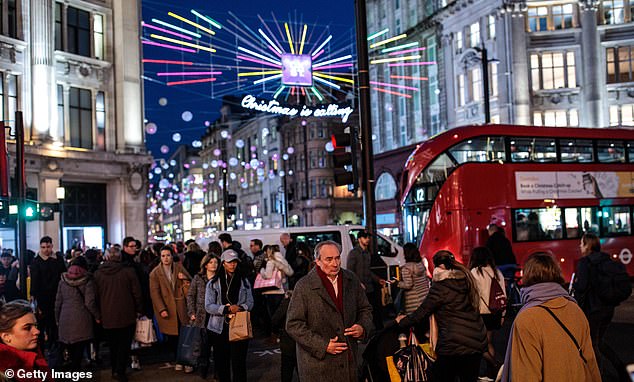 Britons are expected to spend almost £3billion in the High Street and online. Image shows Christmas shoppers in London.

Major names like Debenhams, House of Fraser and Gap are offering hefty price cuts, while upmarket chain John Lewis has been dragged into the price-slashing battle through its promise of being ‘Never Knowingly Undersold’.

The web retailer trade body, IMRG, said the Black Friday sales event at the end of November was largely a damp squib. As a result, both online and High Street stores have been left with a huge inventory of merchandise that they need to shift.

Figures from the Centre of Retail Research (CRR) suggest total spending on Friday, both online and in the High Street, will hit £1.23billion with another £1.65billion on Saturday. It suggests online shopping for gifts will peak on Friday, with 7.2 million people making purchases worth £321m.

On the High Street, in shopping centres and retail parks, the CRR predicts spending will hit £1.38bn on Saturday, as ten million pound the pavements. A survey by Opinium for VoucherCodes found one in five people will do their festive shopping at the last minute.

n AMAZON warns it could hike its fees for tens of thousands of small businesses on its online marketplace if the UK introduces a 2 per cent tax on tech firms’ UK sales.