Despite the so-so acting and dodgy visual effects, The Meg proves a lot of summer-holiday fun

At a basic level, The Meg is a very silly film about a group of scientists accidentally unleashing a giant shark that most people believed had been extinct for more than two million years on an unsuspecting world.

Of course, it being summer, a large proportion of that unsuspecting world is inevitably at the beach, happily treading water, blissfully unaware of the new – and very large – dangers that now lie beneath.

Scientifically preposterous, it’s a classic B-movie that’s not particularly well acted, features some truly terrible lines – ‘That living fossil just ate my friend’ – and some of the toothy visual effects are downright comical. 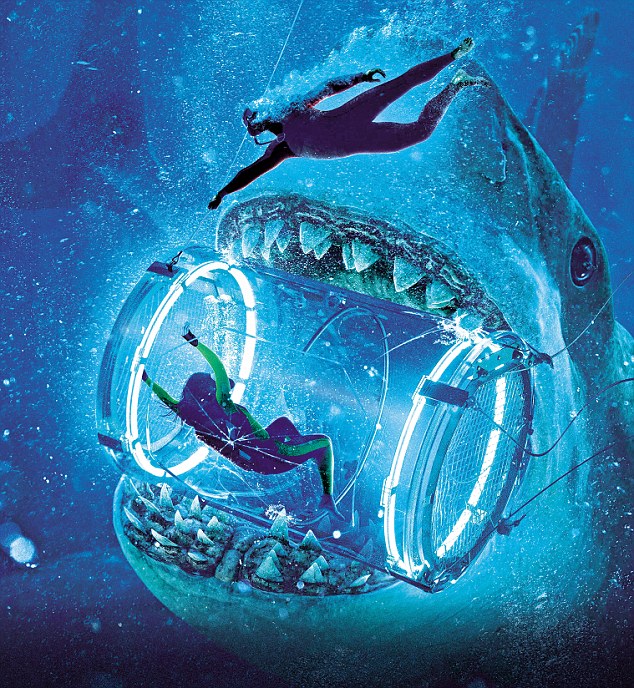 But park your brain in a low summer-holiday gear, load up with popcorn, and The Meg, while never great, is certainly a lot of end-of-pier fun. It’s not a film to be taken too seriously. After all, it’s got Jason Statham in it.

Much of the underwater action takes place in Chinese coastal waters, it’s a Chinese beach resort that comes under particular attack, and the film’s leading lady – and love interest – is played by the Chinese actress Bingbing Li. 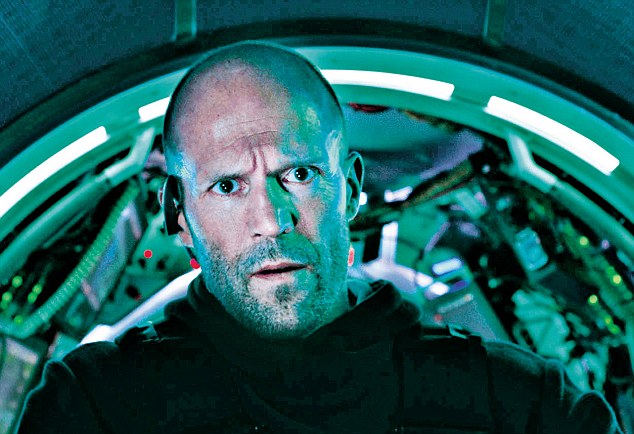 But park your brain in a low summer-holiday gear, and the film, while never great, is certainly a lot of fun. It’s not a film to be taken too seriously. After all, it’s got Jason Statham (above) in it

Will that deter British audiences? I wouldn’t have thought so: after all, Li – playing a very modern, kick-ass single mother – is decent enough and, besides, most of us have only come to see the shark, the megalodon, or Meg for short, all 25 whopping metres of it.

How does it come to be released on an unsuspecting world? Deep-breath time.

Backed by a larger-than-life billionaire (Rainn Wilson) a state-of-the-art underwater laboratory has been set up to test an outlandish theory proposed by the good Dr Zhang (Winston Chao) that at great depths the bottom of the sea isn’t the bottom of the sea at all but a ‘thermo-cline’, a frozen layer concealing even greater depths below. And guess what, he’s right. Only those greater depths aren’t empty. 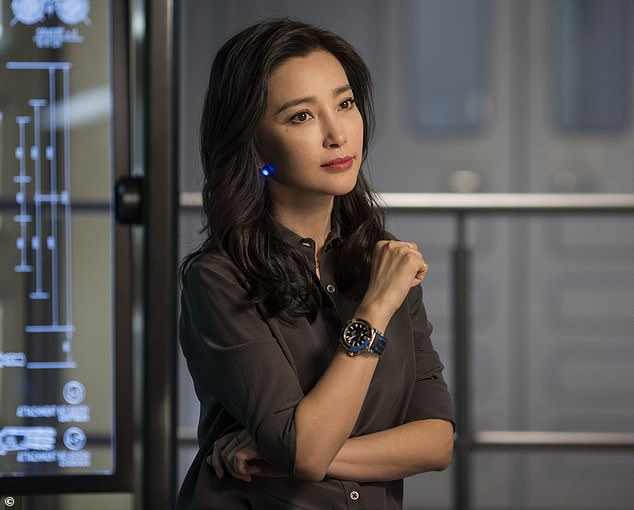 And it shows Hollywood’s appetite for attracting Asian audiences with, among other things, a Chinese leading lady, Bingbing Li (above) who is on the submersible Statham must rescue

Which is bad news for the first submersible that sails into them. Very soon it comes under violent attack, is badly damaged and marooned on the sea bed at a depth of over 11,000 metres.

Only one man has ever mounted a successful rescue mission at a depth of over 10,000 metres and he – after a rescue went tragically wrong – is now a divorced drunk living, beer bottle permanently in hand, in Thailand. Ah, that’ll be Jonas Taylor (Statham).

He’s the only man in the world who believes the Meg is a living creature and…oh yes, it’s his ex-wife who just happens to be piloting the wrecked mini-sub. 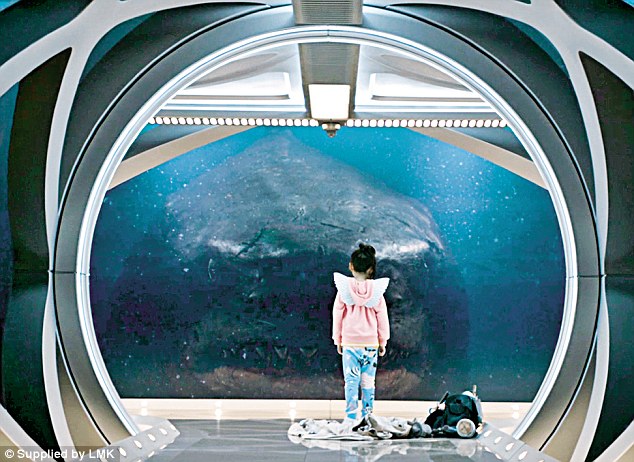 To be fair, director Jon Turteltaub has at least half his tongue firmly in his cheek, and there are one or two very funny lines so there’s still a lot of fishy fun to be had

Anyone anticipating one of the best ‘I told you so’ moments, however, will find the writers are ahead of them.

To be fair, director Jon Turteltaub has at least half his tongue firmly in his cheek, and there are one or two very funny lines. Jonas saves so many lives so often I lost count, and we’re so familiar with the shark genre that the end does drag a bit.

Acting-wise, this is no one’s finest hour and, in this age of ultra-realism, some of the visual effects do underwhelm. But there’s still a lot of fishy fun to be had.

The jump from the world of animation to live-action can be a difficult one for film-makers but it’s a transition the South Korea-born director Jennifer Yuh Nelson, hitherto best known as the director of Kung Fu Panda 2 and 3, makes with modest aplomb with The Darkest Minds. No one, however, could say she was exactly breaking new ground.

Set in a dystopian near-future (yes, another one) where 98 per cent of young teenagers have been killed by an unknown ‘adolescent plague’, it’s a tale of the two per cent who survive. They emerge blessed/cursed with special X-Men-like powers – telekinesis, electricity, flame-throwing etc – which mean the adult world is very frightened of them. Which is why they are herded into special camps, categorised – according to power – by colour and put to work.

Until one day, a small group escapes and goes in search of a special teen army led by the legendary ‘Slip Kid’.

It’s very derivative, calling to mind anything from The Maze Runner to the Divergent trilogy, via The Fifth Wave, and takes a long time to get going. But it does just about get there, helped by attractive lead performances from Amandla Stenberg and Harris Dickinson and a refreshingly ‘colour-blind’ take on adolescent love. It is quite violent, though.

We’re used to multi-stranded films based around a single event; indeed, the late Garry Marshall made them a speciality with the likes of Valentine’s Day and New Year’s Eve. Now director Ken Marino, and screenwriters Elissa Matsueda and Erica Oyama, rework the genre with Dog Days, weaving a tangle of inter-connected Los Angeles-based stories around… the therapeutic value of dogs.

At nearly two hours it’s incredibly long for such a lightweight offering but does have an attractive cast, a deeply sentimental streak and a certain furry charm. 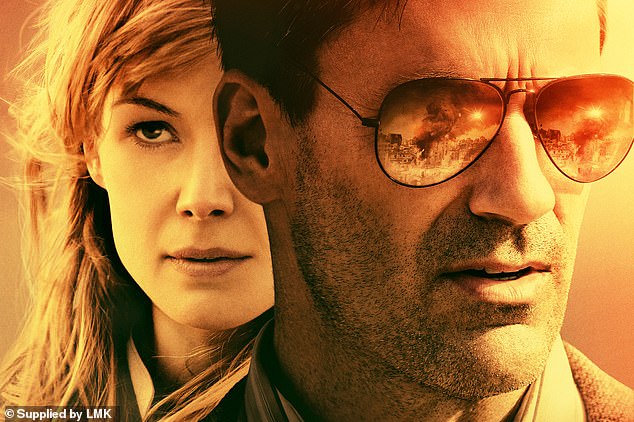 Another week, another period spy thriller set in the Middle East. The Negotiator is set in the powder keg that was Eighties Beirut and stars Jon Hamm and Rosamund Pike (above)

Hot on the heels of last week’s Damascus Cover comes another period spy thriller set in the Middle East, this time in the powder keg that was Eighties Beirut. The Negotiator is definitely a step up, with a stronger cast, led by Jon Hamm and Rosamund Pike, and a more polished screenplay, from Bourne franchise writer Tony Gilroy, about a former diplomat (Hamm) called in to negotiate when his friend and local CIA chief is kidnapped.

Like the 2014 original, Unfriended: Dark Web unfolds entirely on a laptop screen, with Matias settling down for an evening of multi-tasking on the second-hand laptop he’s somehow acquired.

But who was the previous owner? Let’s just say finding out was too nasty for me.