Despite their starry casts, Pinter Five and Six are evenings of maddening mystery and snobbishness

Jamie Lloyd’s season of one-act Pinter plays continues but, despite their starry casts, they’re evenings of maddening mystery and snobbishness

Starry casts are the hallmark of Jamie Lloyd’s season of short Pinter plays. The fifth collection starts with The Room, from 1957, written while Pinter was a young actor appearing in rep.

Rupert Graves plays Bert, who silently scoffs bread, bacon and weak tea, while Jane Horrocks, splendid as his inane missus, Rose, witters on about the weather. ‘It’s murder,’ she says of the cold outside. There’s your clue. In Pinterland, everything’s murder. It’s to do with all those whodunnits he used to appear in.

Patrick Marber directs, extracting as much menace as you’ll ever get out of this play’s maddening mystery, in which the arrival of a blind man (Colin McFarlane) causes existential panic. 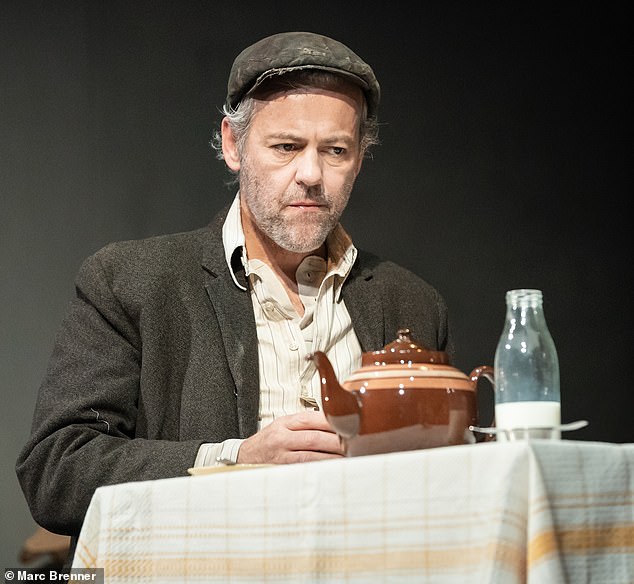 Pinter Five, the fifth in Jamie Lloyd’s season of short plays opens with The Room, a maddening mystery starring Rupert Graves as Bert (above) and Jane Horrocks as his insane missus, Rose

Victoria Station, from 1982, is light relief. Graves is a cabbie who’s totally lost the plot: ‘Victoria Station – never heard if it.’ Colin McFarlane is terrific as his furious controller, issuing physical threats over the squelch of radio static.

It’s a fine sketch, more satisfying than 1981’s Family Voices, about a son (Luke Thallon) who has lost contact with his parents. Pinter groupies will note that the writer was himself spurned by his own son Daniel, who failed to attend his father’s funeral.

No Pinter play is happy. Indeed, biliousness is on tap in 1991’s Party Time, from Pinter Six. It’s about an exclusive club where the well-heeled members drink while mayhem rules the streets. 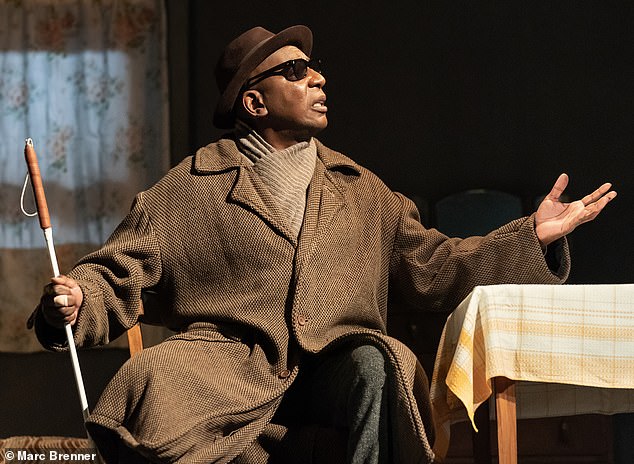 The arrival of a blind man (Colin McFarlane, above) causes existential panic. Patrick Marber directs, extracting as much menace as you’ll ever get out of this play

Phil Davis creepily promises that after ‘a bit of a round-up’, things will be back to normal outside.

Celebration – from 2000 and the other half of Pinter Six – is about brothers and their wives enjoying (or not) a wedding-anniversary binge in a posh London restaurant.

Davis and Ron Cook (the latter superb) are the loadsamoney cockney wide boys.

On declaring himself a conscientious objector over National Service in 1948, Pinter faced two trials and was fined £80, which his father paid.

Tracy-Ann Oberman and Celia Imrie are their gold-lamé wives. John Simm plays a slimy banker who married his secretary (Katherine Kingsley), whom he calls ‘a scrubber’.

The drunken dinner is overseen by Gary Kemp as the oleaginous restaurateur, and Abraham Popoola makes a striking appearance as an eccentric waiter.

But it’s a one-note show, Pinter unwilling to communicate anything much except his contempt. You might think you’re getting Pinter the prophet; what you’re really getting is Pinter the snob.