Details of audio of Peter and Karl Stefanovic emerge

Alleged details of the secretly recorded audio of brothers Peter and Karl Stefanovic having an explosive chat in an Uber car have emerged.

The Daily Telegraph reports the pair spoke about their Nine bosses and allegedly complained about working with new Today co-host Georgie Gardner during the talk.

A Nine spokeswoman also confirmed to the publication that the pair will not have to offer a ‘sincere formal ‘apology to Georgie for what was said.

From  allegedly ‘b**ching’ and ‘moaning’ about their Nine bosses to Georgie Gardner: Details of the secretly recorded explosive audio of Peter and Karl Stefanovic emerge…And they DON’T have to apologise

The siblings also reportedly spoke about Nine News and Current Affairs head honcho Darren Wick, Today’s Mark Calvert and 60 Minutes’ Kirsty Thomson during their chat, that occurred when Peter was in an Uber, and chatting to Karl on the phone, on loudspeaker.

Nine confirmed to the publication that they had not bought the audio, that reportedly is being shopped in the media to the highest bidder.

Nine also denied that the bosses had been consulted about the recording, and denied rumours Darren and Mark had a fiery discussion about the audio in Mark’s office. 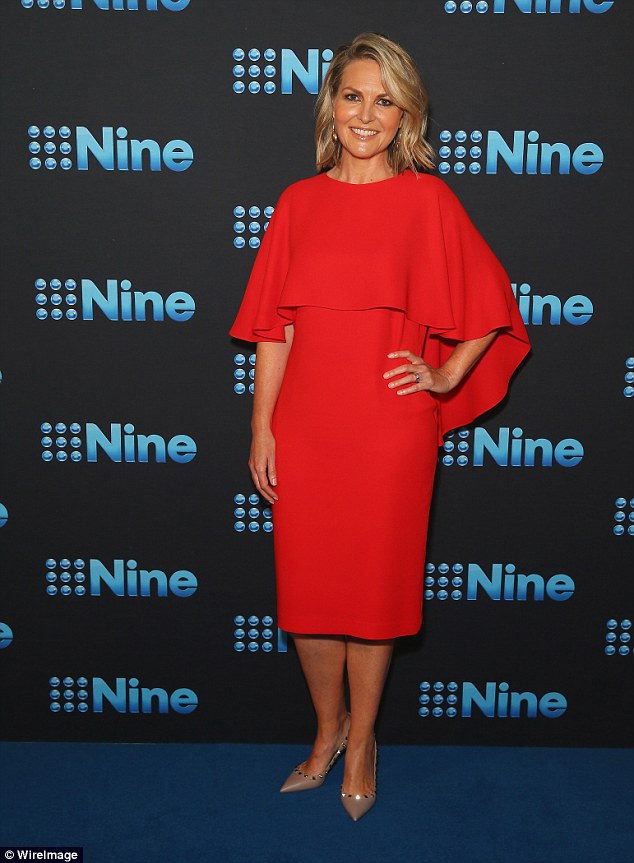 Talk of the town? Pictured is Georgie Gardner

A source added that one of the brothers was asked about the chat, but couldn’t recall what was said, while Nine management have been in talks to solve the issue.

Daily Mail Australia has contacted Nine for comment in relation to this article.

On Monday, entertainment journalist Peter Ford alleged that an Uber driver is shopping around audio of an explosive chat between Peter and Karl.

In his sensational claims made on The Kyle and Jackie O show, Ford said the driver had secretly recorded Peter speaking to his brother Karl on loudspeaker while in his vehicle, with the siblings engaging in a bit of ‘b*tching’  and ‘moaning’.

Earlier this week, there were rumours that it may not even exist, due to the content of the chat being unknown. 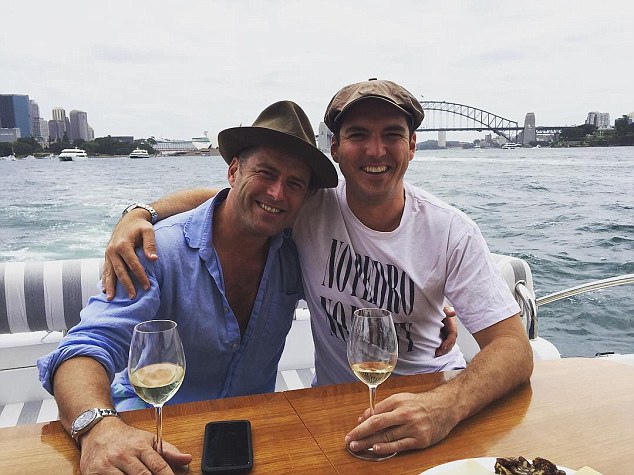 ‘The buyer of the tape is someone who is very unlikely to publish it anywhere’: 3AW’s The Rumour Mill hinted on Tuesday that the audio, if it even exists, may not ever see the light of day

Ford, who purportedly has seen transcripts of the audio, alluded that part of the Stefanovic brothers’ conversation involved Karl’s Today co-host Georgie.

It has long been speculated that there is tension between the two veteran TV hosts.

Meanwhile, 3AW’s The Rumour Mill hinted on Tuesday that it may have been snapped up by a source hoping to keep its contents under wraps.

Suggesting that the recording may not ever see the light of day, the publication quoted an unnamed source who said: ‘The buyer of the tape is someone who is very unlikely to publish it anywhere.’

While Channel Nine, the Stefanovics or someone close to the brothers may have purchased the recording to prevent it getting out, it is also possible that Uber had traced the tape’s whereabouts to its driver.

Perhaps fearing bad press over the morally dubious practices of one of its drivers, it is not a stretch to believe the ride-sharing company would be interested in preventing the audio being released.

Meanwhile, speculation is mounting that many of the big-name Australian media companies have not been offered the chance to buy the tape – despite Ford’s claims that it is being ‘shopped around’ to the highest bidder.

This has caused some speculation from high-placed insiders as to whether the recording even exists. 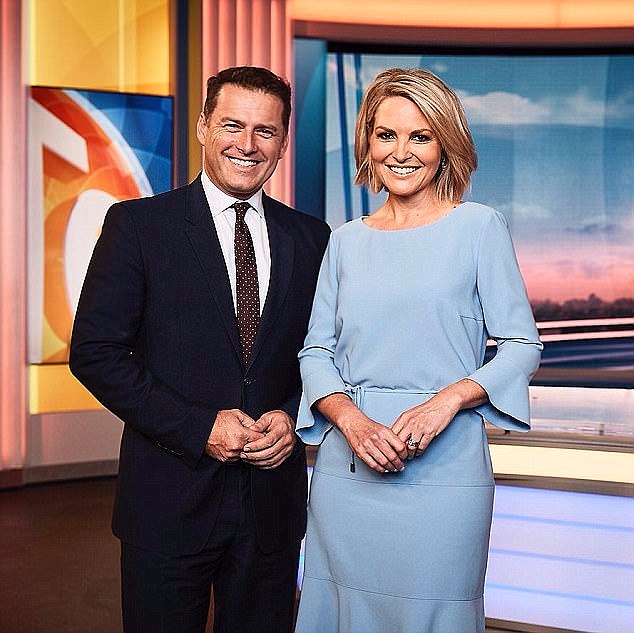 Who bought it? The tape allegedly contains discussion of Karl’s Today co-host Georgie Gardner (right) but it has yet to be published

On KIIS FM radio on Monday, Ford said of the secretly recorded conversation: ‘Some of it would be embarrassing if it got out.’

Before his interview on Kyle and Jackie O, Ford appeared to reference the taxi driver’s recording on Twitter, writing that Karl may have an ‘urgent issue to deal with’.

Referencing Ford’s tweet, Jackie ‘O’ Henderson asked: ‘So when you said it could destroy a TV partnership, do you mean the network or someone on the show?’ ‘ Look, there was a bit of b**ching and a bit of venting’: Speaking to KIIS FM’s Kyle Sandilands (left) and Jackie ‘O’ Henderson (right), Peter Ford said the audio contained ‘frank’ discussions

‘Obviously I was talking about Georgie Gardner. I don’t know that it would destroy it, but it certainly would cause…’ he replied, before Kyle Sandilands jumped in.

Kyle asked what specifically was said between the Stefanovic brothers about Georgie, who joined Karl on the Today show earlier this year.

‘I just spent three minutes explaining I can’t tell you. Look, there was a bit of b**ching and a bit of venting,’ Ford replied.

Ford then proceeded to explain the backstory behind the secretly recorded phone conversation. 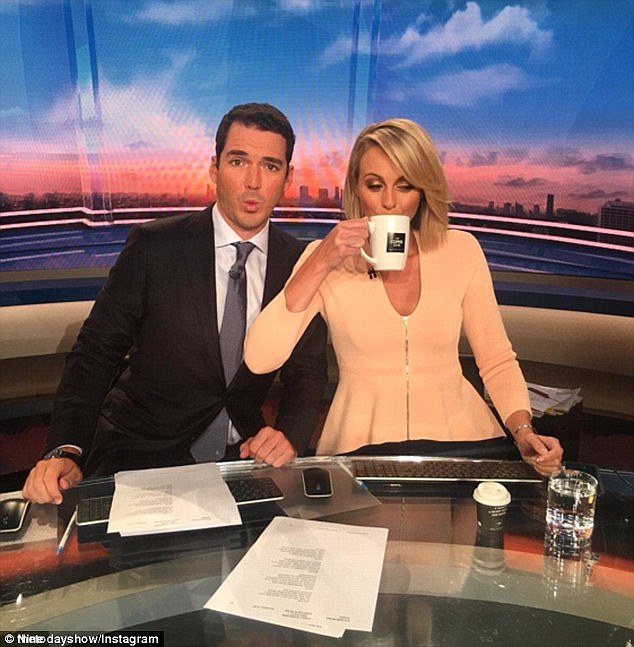 Mystery: While it is claimed Peter made a late-night phone call, the full conversation has not yet  been released

‘A TV celebrity, late at night, gets into a cab’s backseat. He decides to make a phone call, puts that phone call on speakerphone and rings someone he’s related to, his brother,’ he began.

‘And they have a good session, they have a very frank and full conversation, and they cover lots of territory, and they talk about lots of people.’

A spokesperson for Channel Nine told Daily Mail Australia on Monday: ‘We think it is pretty low to record a conversation without them knowing.

‘We are not commenting on the story and of course it is illegal to report on a taped conversation that people don’t know about.’ 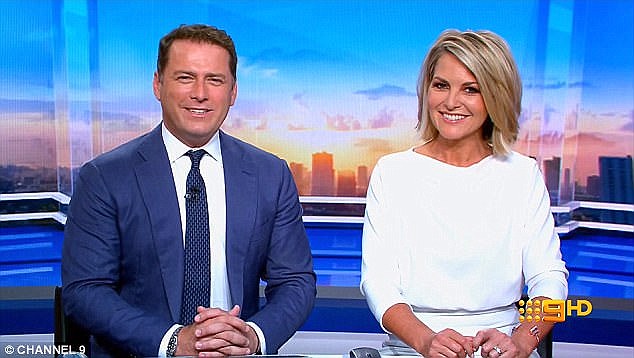 Trouble in paradise? If published, the recording could potentially cause problems for Nine