Paul Caneiro (pictured), 51, the brother of a New Jersey millionaire, who was killed alongside his wife and two children before their home was set on fire, has denied any involvement in their deaths

The brother of one of the four homicide victims found at a burning New Jersey mansion is being hailed as a hero for saving his wife and two daughters from their house after it was set on fire.

Paul Caneiro is due in court on allegations he set fire to his own house. He is currently in a Monmouth County jail.

‘We anticipate that we will call family members to indicate that (Paul Caneiro) in fact helped his family get out of their burning residence,’ defense attorney Robert Honecker told the New York Daily News.

‘He’s maintained his innocence in regard to these charges.’

A detention hearing for Paul Caneiro is scheduled for Wednesday. He’s charged with aggravated arson.

If convicted, he faces a maximum of 10 years in prison.

Monmouth County prosecutors say Caneiro set his Ocean Township home on fire while his family was inside.

All safely escaped. Prosecutors will seek to have him held until his trial.

The fire at Caneiro’s home occurred a few hours before the blaze at the Colts Neck home of his brother Keith was reported.

Officials say all were slain before the fire.

Authorities won’t say if Paul Caneiro is a suspect in the slayings. 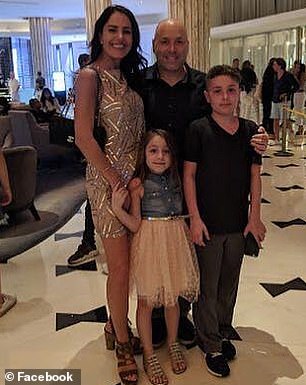 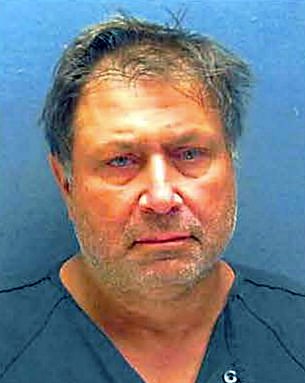 Keith Caneiro, his wife Jennifer, and their two children Jesse and Sophia (all pictured left) were murdered at their Colts Neck, New Jersey home before it was set on fire. Paul (right) was arrested for setting his own home on fire beforehand 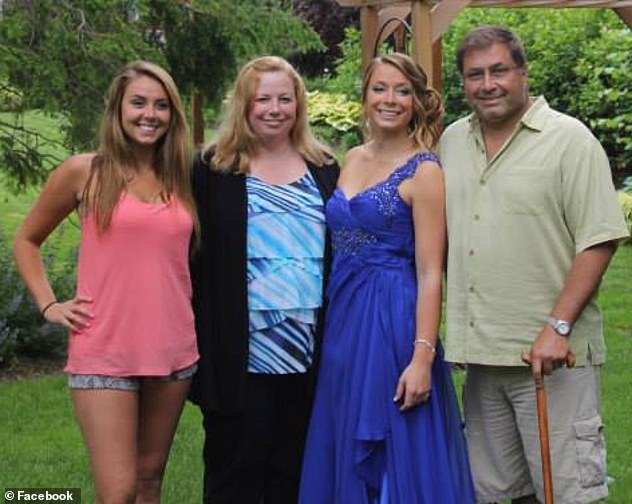 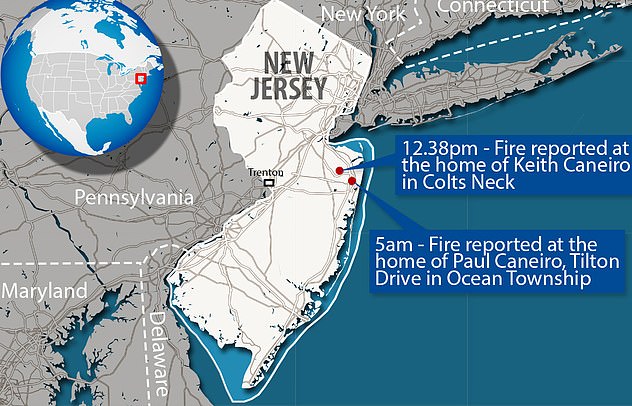 The two houses are 12 miles apart. There were just over seven hours between when the two fires were reported

Honecker, a former Monmouth County prosecutor who became a defense attorney, said that his client, Paul, was in a police station in Ocean Township when he learned of his brother’s death.

‘He is in the police station when the fire is reported,’ said Honecker.

‘And he learns his brother has apparently died while in police headquarters.

‘He got very emotional. He was devastated by the news.’

Keith Caneiro, 50, his wife Jennifer, 45, and their two children, Jesse, 11, and Sophia, eight, were found dead at their $1.5million mansion as it went up in flames last Monday afternoon.

Keith, whose body was found on the front lawn, had been shot. Jennifer, Jesse, and Sophia were all stabbed to death.

Keith’s brother, Paul Caneiro, 51, was arrested and charged on Wednesday with aggravated arson for a fire that was reported at his own $670,000 home in Ocean Township around 5am the day before.

On Thursday, Honecker told CNN that his client ‘maintains his innocence on this charge and any other potential charges’. 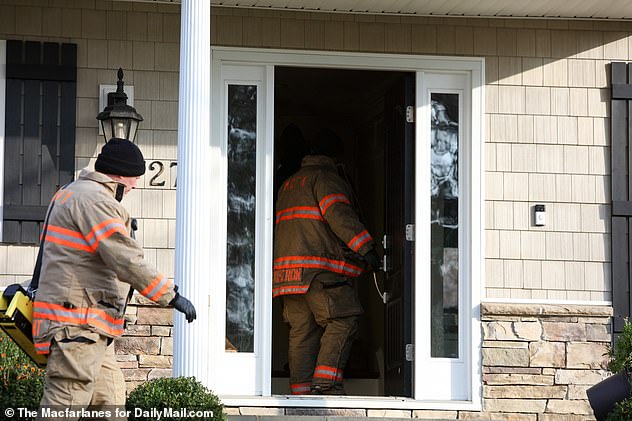 ‘His family fully support his defense of this charge. No evidence has been produced that suggests a reason why he would engage in such conduct. He fully expects to be vindicated when this case finally resolves,’ Honecker added.

Prosecutors say Paul doused part of his home with gasoline from cans and then set it on fire while his wife and two adult daughters were inside.

It was also revealed on Thursday that Paul stayed near his home in Ocean Township until about noon on the day of his brother’s death.

‘We know he was here up until at least 12. He was in the car and our neighbor… was talking to him. The kids were using his bathroom, one of his girls came over and used our bathroom,’ a neighbor told the Asbury Park Press.

On Wednesday, hundreds of people from New Jersey’s Colts Neck neighborhood gathered to honor Keith and his family who were brutally murdered in their own home.

‘I’d be lying if I stood here and told you this was easy,’ Mayor JP Bartolomeo told the crowd as they stood on the front steps of the town hall on Wednesday night. 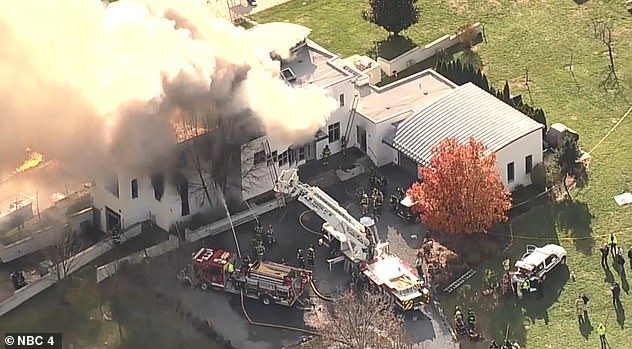 Jennifer and Keith paid off their mortgage two years ago. Their home (pictured during the blaze) is in an exclusive neighborhood and sits on nine acres of land 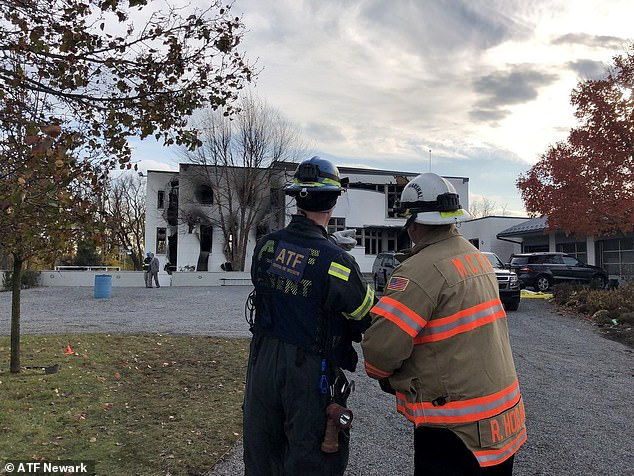 The burned out mansion in Colts Neck is still not fully accessible to law enforcement because of the damage caused by the blaze. There is no indication yet how it was started

Bartolomeo said the Caneiros were well-known in the community, often attending their children’s sporting events. Jesse played baseball while Sophia was a cheerleader, according to NJ.com.

A neighbor called 911 about a fire at Keith’s home, which was just 12 miles away from Paul’s Ocean Township residence, at 12.38pm on Monday.

Keith was shot at least twice in the back and head and his wife and children had been stabbed, according to NBC.

All of the bodies were badly burned and prosecutors said they were all victims of ‘homicidal violence’.

Keith and Paul were partners in a tech consulting firm where Keith was the CEO and founder and Paul was the vice president. 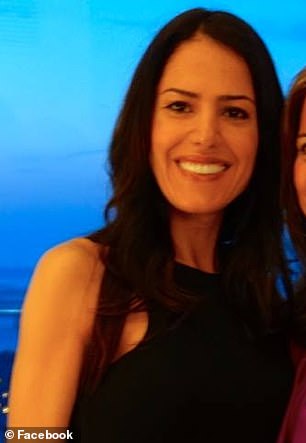 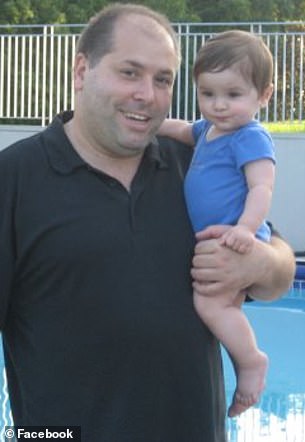 Neighbors said Jennifer Caneiro, 45, was ‘so nice’ and ‘beautiful’. Keith was the CEO of technology firm Square One

Both Paul and Keith married women from Staten Island. At Paul’s wedding in 1991, Keith acted as the best man.

They were also partners in a pest control company they operated from the same office.